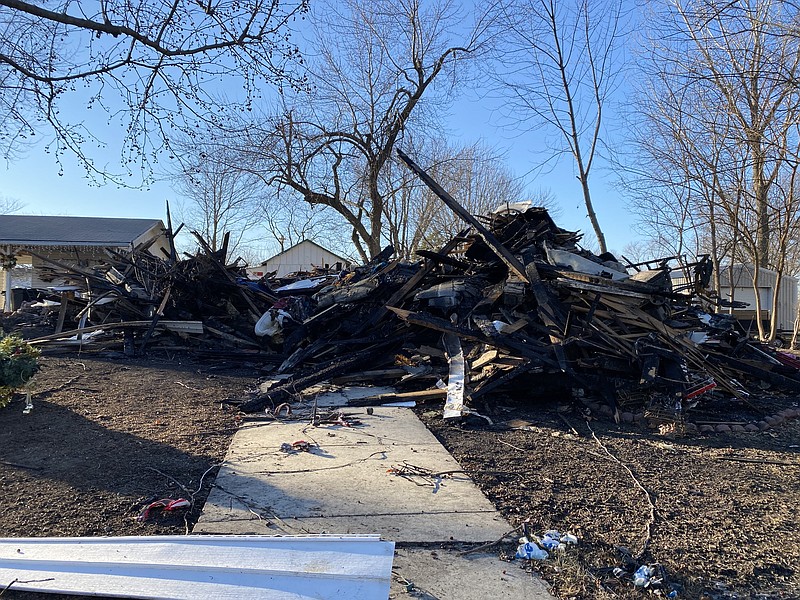 A week later, wreckage is all that remains from the fire, with some items still visible among the ash.

A house fire blazed in Prairie Home last week, irreversibly changing the lives of one family.

The fire, likely due to a faulty hot water tank, began to rage during the morning of Monday, Dec. 13. Though none of the residents -- Georgina "Gege" Haywood, grandson Bronxton, and Gege's parents, Connie and Hubert "Skeeter" Hale -- were home, the family eventually lost the house.

With it went treasured memories, irreplaceable items and, tragically, the family's four dogs -- Gigi, Chancie, Holly and Bella. First responders stayed on the scene for hours, the family said, using 45,000 gallons of water to finally put out the fire.

They had decorated their home for Christmas just a few days prior.

"I don't want anybody else to have to go through what we have gone through this last week," Connie Hale said Monday.

The residence had a storied history in Prairie Home, having been built early in the 20th century. It was a former home of long-time Prairie Home mayor Charles Knorp and his wife, Geraldine, and later Jamestown Postmaster Don Justine and wife Debbie.

Its current residents had not lived there long, having only moved to Prairie Home a year and a half ago.

The day of the fire, Haywood had left to take Bronxton to school and the Hales were at the VA hospital. It was just a typical Monday morning, Haywood said, until she returned to Prairie Home from her job in Columbia after receiving a text about the fire from a neighbor.

Seeing what had happened when she arrived was a reality check, Haywood said. It's made the family realize the importance of regularly checking things -- like the hot water tank that likely caused the explosion -- for maintenance, and also of preserving what you can digitally, such as treasured photos and important documents.

There has been some good in the wake of the fire -- an outpouring of support from the people of Prairie Home and other surrounding communities. Even though the family is relatively new to the area, they have been well-taken care of by Roxzanna Duncan, of Duncan's Diner, who has provided them with free meals, and the Prairie Home Lions Club quickly sprang into action to gather clothing donations for Bronxton. The California Eagles have also lent a hand, along with countless other individuals who have donated money and other support to the family.

Now, the community is "like family to us," Haywood said.

Haywood said that much is evident through Duncan's willingness to let Bronxton display a poster at the diner showing Prairie Home his lost friends, the family dogs, so they know they were important members of the community, too. Bronxton originally proposed putting a poster on every block, Haywood said, but his grand idea had to be scaled back a bit. Duncan plans to start a fund in his and the dogs' names to be donated to the humane society or a local shelter, Haywood said.

"The sad part is, we had dogs that depended on us," Skeeter Hale said. "It makes you cry."

Through the community's support, the family said they have been lucky to already have a rental home lined up, ready for them to move into at the start of the new year. It'll be a welcome change, since they've been staying in the family's camper near the Prairie Home Fairgrounds. Donations will also help the family to properly celebrate Christmas with a getaway to a cabin in Branson, where they'll stay from Dec. 23 to nearly the end of 2021.

It'll allow the family to get away and recoup, Haywood said. The cabin will be decorated for Bronxton, she said, so he's able to enjoy a festive trip with his family.

It's impossible to list every individual that's helped them during the past week, the family agreed, but they were able to rattle off plenty of people who made a difference. First responders from the fire and police departments, who stayed on the scene for hours, one even offering the family a place to stay if they couldn't find a hotel to stay in overnight the day of the fire. The Prairie Home Dollar General donated food to firefighters on the scene. The post office and the local ministerial alliance helped the family and Haywood's coworkers in Columbia set up a GoFundMe for the family.

They certainly haven't been lacking in help with their needs during the past week, Haywood said, but now could use some direction for how best to clean up the remains of the home. She said they don't know where to start, from procuring dumpsters for clean-up to where they should dispose of anything. Anyone who could help, the family agreed, would be appreciated as they begin to tackle the task.

The family has been salvaging what they can from the home's remains, but the majority of their treasured possessions are beyond saving -- guitars passed down by Skeeter's father, the family's Bibles, family heirlooms, baby pictures, countless other items that meant something.

"Those things are irreplaceable," Haywood said.

Connie Hale agreed -- "Enjoy what you have and use it. (You don't know) when it'll be gone. ...You shouldn't take all of what you've cherished and (not) use it or wear it or do anything with it, and now don't have the opportunity to take care of it."

Nevertheless, the family plans to continue moving forward. They hope to eventually build a new home near the one they lost.

But the best part, Skeeter Hale said, is it's a new day. The family can keep moving forward. They're alive, and he said God has made them a way.

"The love of the people in Prairie Home and surrounding towns, unbelievable," Connie Hale said. "...Love your family, love your neighbors, because you never know when they'll be gone. Don't hold grudges. Share the love that you have with others. Kentucky really was bothering me -- people that lost everything (to the tornadoes), lost loved ones within the week, or right before, we lost our house. I think about them, I pray for them, because I feel now what they felt, but they lost somebody they love. God blessed us. Yes, we lost our dogs, but we didn't lose each other."

A week removed from the fire, though still an emotional topic, the family has clearly kept their faith and humor as they navigate their next steps. They joke, laugh, cry and remember together. They'll move forward together.

Democrat photo/Kaden Quinn A house fire blazed in Prairie Home last Monday morning, eventually destroying the home of Georgina "Gege" Haywood, grandson Bronxton and parents Connie and Hubert "Skeeter" Hale. Though none of them were harmed, the family lost their dogs — Gigi, Chancie, Holly and Bella.