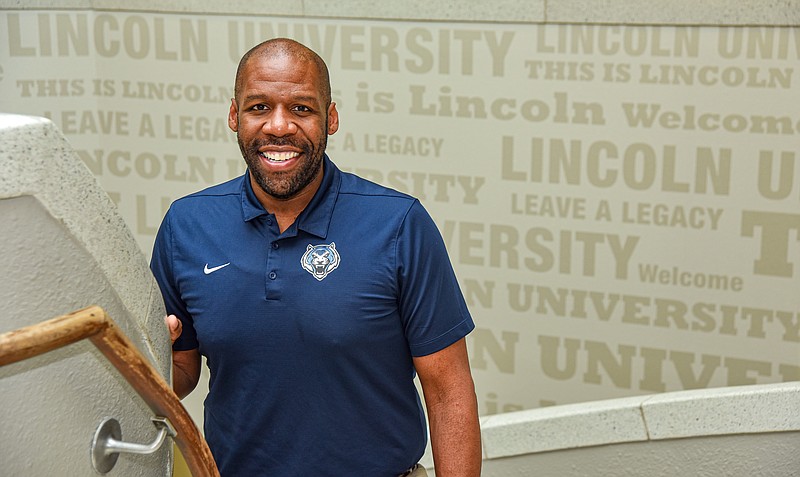 Jeremy Faulk is bursting with energy by 7:30 a.m.

It's contagious energy he likes to direct at meeting Lincoln University faculty, staff and students and finding ways to support them.

Faulk, 37, became the chief of staff at Lincoln on June 1.

Two months into his role, the Charlotte, North Carolina, native said he's excited to be back at a Historically Black College and University. It's home with a family feel, he said.

"One of the big things the president (John Moseley) will be honing in on, and not just him, but we, is one Lincoln," Faulk said. "We are one. That whole family feel, that's a big piece of HBCUs. It's all about the family. We're there for everyone."

He said meeting new people and simply talking to his colleagues has been his favorite part of the job so far. He's probably met someone new everyday, he said, and just likes to engage with his team.

"I have that get 'er done mentality, I like to have fun and I think the staff -- I've learned -- appreciate that," Faulk said.

As chief of staff, Faulk often acts as an extension of and liaison to the President's Office. Campus departments don't report to him specifically, but he supports all of them in working to evolve.

He described the position as an "enhanced project manager."

"That's what's really, really needed as I've learned over the past couple months," he said. "We have some areas that truly need some change -- in so many words -- and change is not always easy."

But change management is one of Faulk's strengths, and he's diving in.

Faulk said Lincoln faces challenges every day, but he embraces them as an opportunity to improve.

Take staffing as an example.

While Lincoln has struggled to recruit qualified candidates for its vacant roles, Faulk said he sees it as an issue that requires creative solutions, such as marketing the university's four-day work week during the summer and developing a more comfortable dress code.

As university administration looks at the current moment as a time of transformation, Faulk said it's his job to ensure each campus department has a strategy for guaranteeing the balls they have in the air land successfully.

"I'm hearing what everybody wants to do and then I'm taking it all in and then I'm sitting down with the president to develop, realistically, what can we do," he said.

Everyone at Lincoln, from students to housekeepers to department leaders, has a valuable voice in providing feedback on how the university is operating and how it can grow, Faulk said.

His philosophy peeks through even on the emails he sends, all of which end with "#TEAMWORK."

"I am a big proponent of teamwork makes the dream work," Faulk said. "I literally have learned at the different institutions where I've worked, if you don't have everybody's buy-in, one won't be successful -- and when I say one, that being the institution."

Faulk said he takes pride in rallying the team around causes or change, which he does with a fun but firm approach.

Providing a more holistic knowledge is one way he hopes to support Lincoln faculty and staff more, he said.

Faulk's varied background in higher education has exposed him to most campus departments, which he said is how he's come to adopt a comprehensive approach to university operations.

He started his career as a resident advisor in campus housing while an undergraduate student, before moving over to university conferences and guest services work. Faulk then spent time in athletics, working on game and internal operations. He eventually moved to facilities management. Prior to coming to Lincoln, he was the senior director of auxiliary services at Life University in Georgia.

"Not that I'm coming in to change what they already have or the Lincoln U. way, it's just more enhancement," he said. "A breath of fresh air -- how can we continue moving forward?"

Coming from Atlanta, Faulk said he was somewhat worried about moving to a smaller community. But those concerns have quickly faded and he's excited to welcome students to Jefferson City.

"Everyone seems to be welcoming and that's what I love," he said.

In the accompanying video, Jeremy Faulk talks about why he enjoys his job as Lincoln University’s chief of staff.