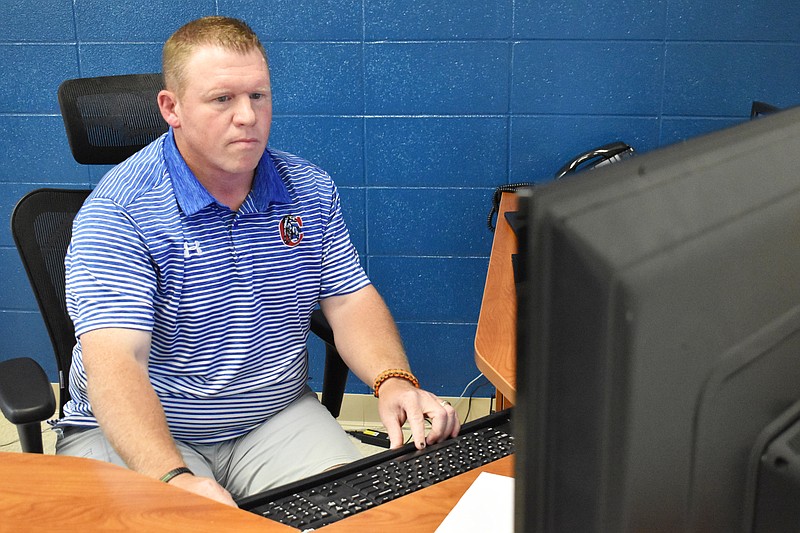 California Elementary and Middle schools have made a new connection.

That's not all that's new in the California R-1 School District this year.

Superintendent Daniel Williams had served in various administrative positions in California schools before leaving six years ago to become superintendent for the Tipton R-6 School District. After a year in Tipton, Williams continued his superintendency experience in the Winfield R-4 School District, a small district approximately 40 miles northwest of St. Louis.

Williams said it is good to be back at home.

"Everywhere I've gone it just seems like people have welcomed me back into the community and it's a really good feeling," he said.

Williams said he learned that every district operates a little differently. The time away from California allowed him to gain fresh ideas and observations others may not have.

"Just because it's always been done a certain way doesn't mean it's the only way or the best," he said, "and I hope I can bring some of those new ideas back to the district that others that have never left may not be privy to."

Williams' goals for the upcoming school year is to refocus energy on student learning and instruction, along with returning to a sense of post-COVID-19 normalcy.

Williams asks community members to be patient as new administrators across the district acclimate to their new roles.

"I think something I ask for (is) patience from everyone," he said. "...we're all new to these positions and we want what's best for kids but that may look and feel different than what it has in previous years."

In addition to new administration in the central office, all three buildings received new principals, with one also receiving a new assistant principal.

At California High School, Jeff West replaces Dwight Sanders as principal. This upcoming school year will be his first year in the California district. However, West is far from new in the community.

Apart from a new principal, West said there isn't much change at California High School. He contributed a lack of turnover for the lack of changes.

"Right now, this year, I think we're pretty fortunate that we have no turnover in staff this year," West said. "For example, I'm the only new person in our building, which is great. I don't anticipate a substantial or large amount of change with much that we're doing."

Tim Beydler will continue to serve as assistant principal at the high school.

West said his experience as an assistant principal in larger schools, where he was responsible for shares of the student population similar to the population at California, will help him in his transition to principal.

"As far as being the head principal, in this building, it's absolutely going to come with unforeseen challenges and it's going to come with a learning curve because you (have) to get in there and do it," West said. "But I'm really comfortable with my preparation based again on some past experience I have, both as a teacher and as an administrator."

Scroggins served three years in his former role, and was a teacher in El Dorado Springs before moving to California.

"We're in a good spot as far as what the previous principal did and really we're just going to try and keep building off that," he said. "We've got an amazing staff, great students and an awesome community. So we're just trying to make a handful of changes to try to show more support for the staff and help celebrate more successes of our kids and just keep building on what's already been established."

For Goans, the upcoming school year marks his 25th with the district and his first in administration. The California native, who attended California schools from Kindergarten till graduation, formerly served as a math teacher. Earlier in his career, Goans also taught math and physical education at California Elementary School. The transition into administration brings challenges.

"It's been a lot of changes, obviously, because normally I'm preparing just for my classroom whereas now I'm preparing for an entire middle school," he said.

A newly-constructed $9.5 million addition adds 33,500 square feet of space, including 22 classrooms, and connects the elementary and middle school buildings. The addition houses: two pre-kindergarten classrooms with their own restroom, six kindergarten classrooms with their own restroom, three Title I (remediation) classrooms, four special education classrooms, a functional skills room, a speech/language pathology room, a classroom for occupational and physical therapies with a curtain divider, an English as a Second Language classroom, a counselor's office, a computer lab, an art room with storage space and a kiln, two teacher workrooms (one per floor), two sets of public restrooms, and two janitor closets (one per floor).

In addition to the new construction, as part of the bond issue crews remodeled 10,500 square feet of the existing middle school building. They expanded the middle school cafeteria and media center/library into the newly-constructed addition. The cafeteria features an outdoor patio area. A new parking lot was asphalted on the northern side of the elementary school and the sidewalk around the circle drive was redone with fresh concrete.

Contractors are completing the finishing touches for the project, which district officials hope to see completed by Monday, in time for teachers to return for workshops. Superintendent Williams said punch-list items remain -- including painting touch ups and corrections to restroom floors.

Abernathy said construction on the addition has been fraught with setbacks thanks to the COVID-19 pandemic and the resulting supply chain disruptions. Shortages on construction materials, and crews being unable to work because of illness (or having to work at other sites because of previous commitments) resulted in the project taking two school years to complete instead of just one.

For instance, Abernathy said the epoxy used on the restroom floors was unavailable before the start of the previous school year. The concrete floors were painted over as a temporary fix. The epoxy had only recently become available, allowing workers to properly coat the floor. He said parts of some door locks were also unavailable until recently.

The school district continues to work with the contractor despite frustration stemming from the hardships faced during construction.

"Right now what I can say is that we have a great relationship with GBH (Builders) and they have really stepped up to the challenge as far as let's get this wrapped up by the 15th," Williams said.

GBH Builders, of Jefferson City, is the general contractor for the project. Abernathy said that while most subcontractors were from the Jefferson City area, many crews contained people from the community.

"Most of the companies come out of Jefferson City but they have local workers," he said. "There are members of our community that work for those companies, which was part of the reason why we went with those (subcontractors)."

In addition to the schools addition, other work was completed throughout the district. Security enhancements, including new secure vestibules and locks on doors, have been installed in all buildings. The district also intends to add more fencing at the baseball/softball field at the high school, as well as behind the football grandstands to prevent children from getting injured from playing under the stands. The additional work cost more than $2 million and was also funded by the 2020 bond issue.

The first day of school for California R-1 Schools' upcoming school year is Aug. 22. Williams said the elementary school will host an open house 4-7 p.m. Aug. 18. The middle school will host registration for sixth- and eighth-graders from 7 a.m.-3 p.m. today and from 10 a.m.-6 p.m. Thursday with an open house scheduled for 5-7 p.m. Aug. 18. High school registration is divided by grade and last name. Students entering 10th through 12th grades with last names starting with A-K registered between 4-7 p.m. Tuesday. A mandatory meeting for new students and students entering the ninth grade with last names starting with A-K was held Tuesday. Tenth- through 12th-grade students with last names starting with L-Z will register 4-7 p.m. Thursday, with a mandatory meeting for new students and ninth-grade students starting at 6:30 p.m. Thursday.

School supply lists for elementary and middle schools are available on the schools' websites. The elementary school will host a school supply program where parents can pay $15 per student for all required supplies except a backpack and water bottle. According to the registration form, the typical amount spent on supplies for elementary students at Walmart is $47 per student. Forms for the program are due Aug. 18. 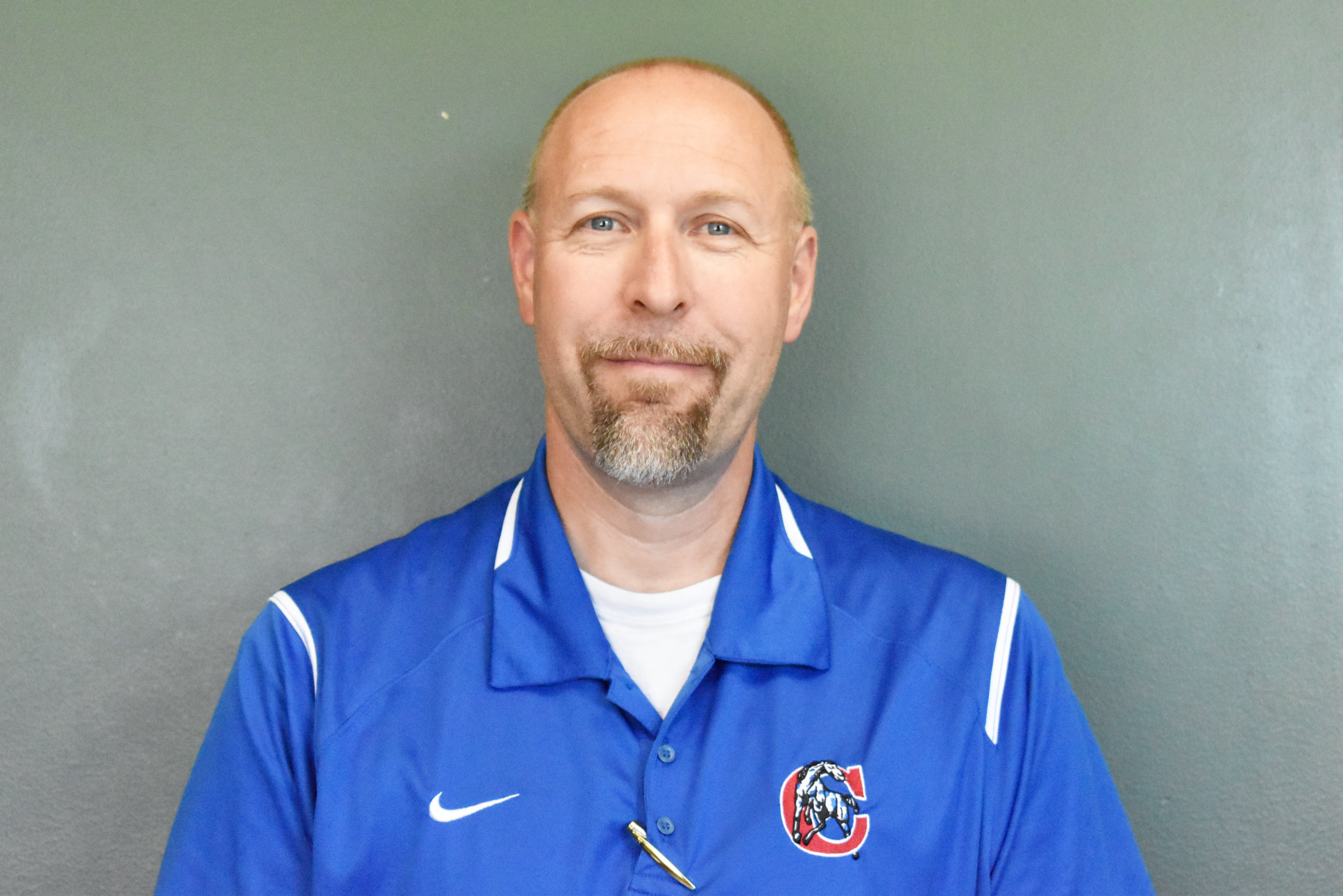 Matt Abernathy, assistant superintendent for the California R-1 School District, poses for a photo Aug. 5, 2022, in his office at the district central office inside California Middle School. (Democrat photo/Garrett Fuller) 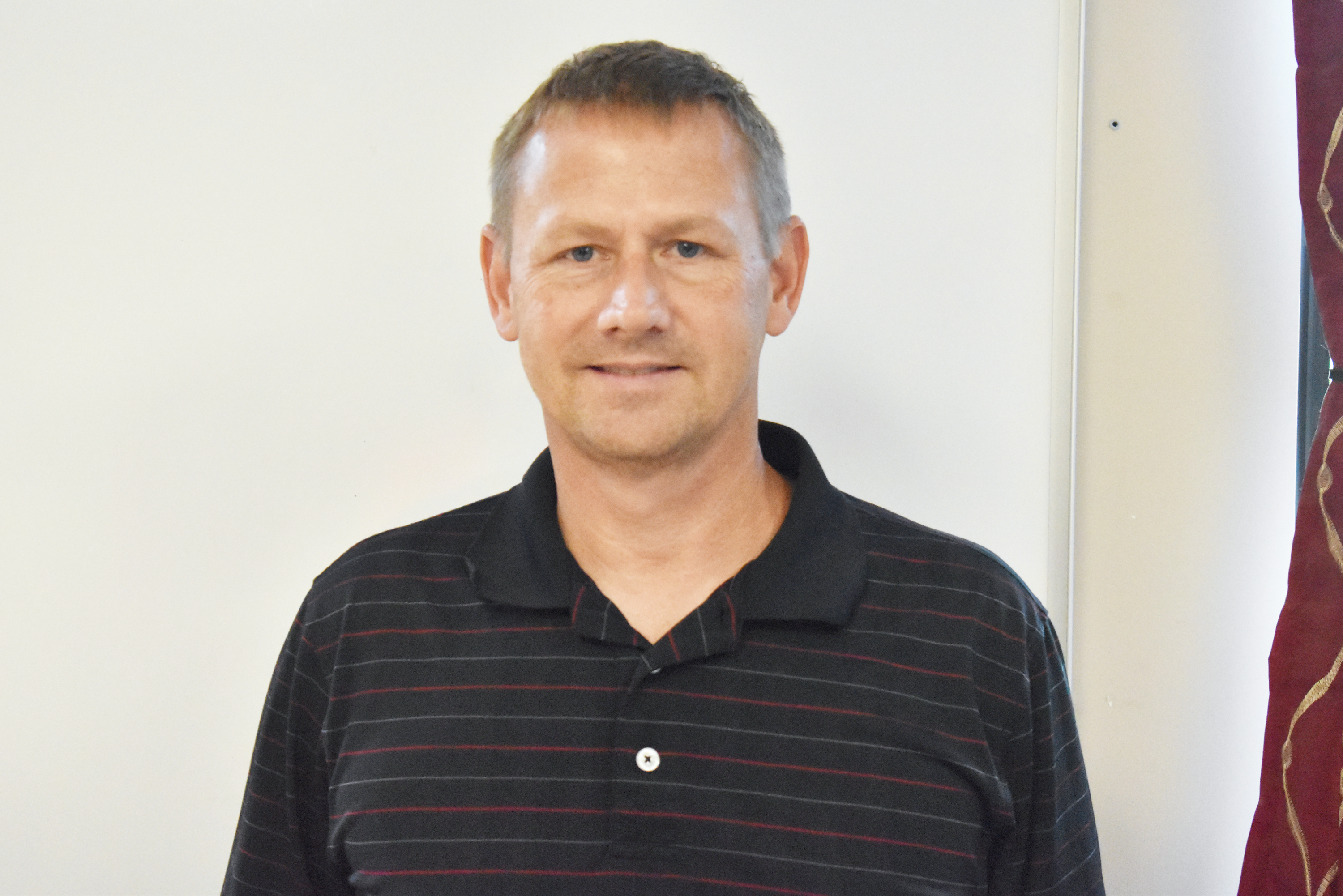 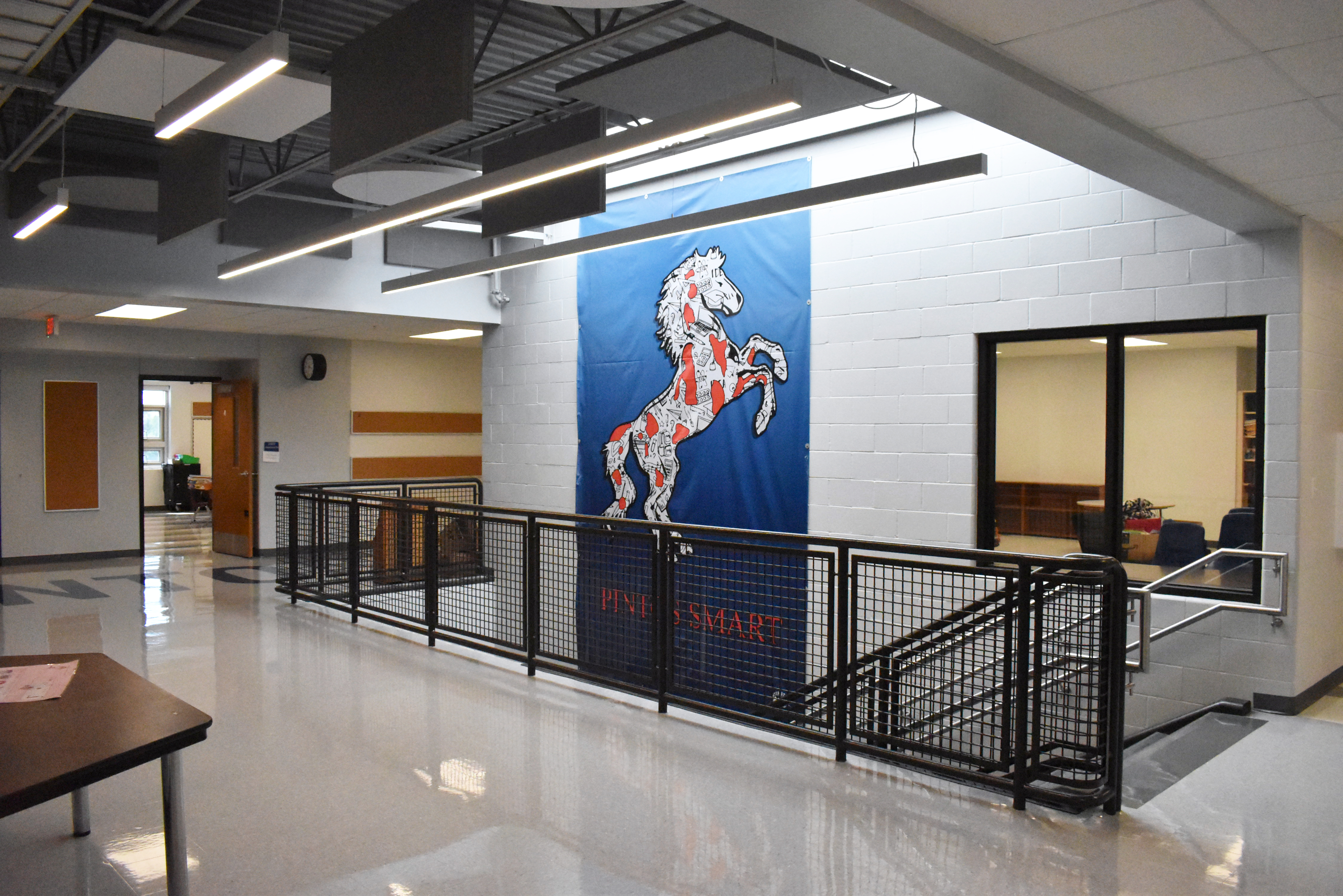 An atrium and naturally-lit stairwell is seen Aug. 5, 2022, in the newly-constructed addition at California Middle School. The addition was constructed with 2020 Bond Issue funds and adds 22 new instructional spaces to the California Elementary/Middle School campus. (Democrat photo/Garrett Fuller) 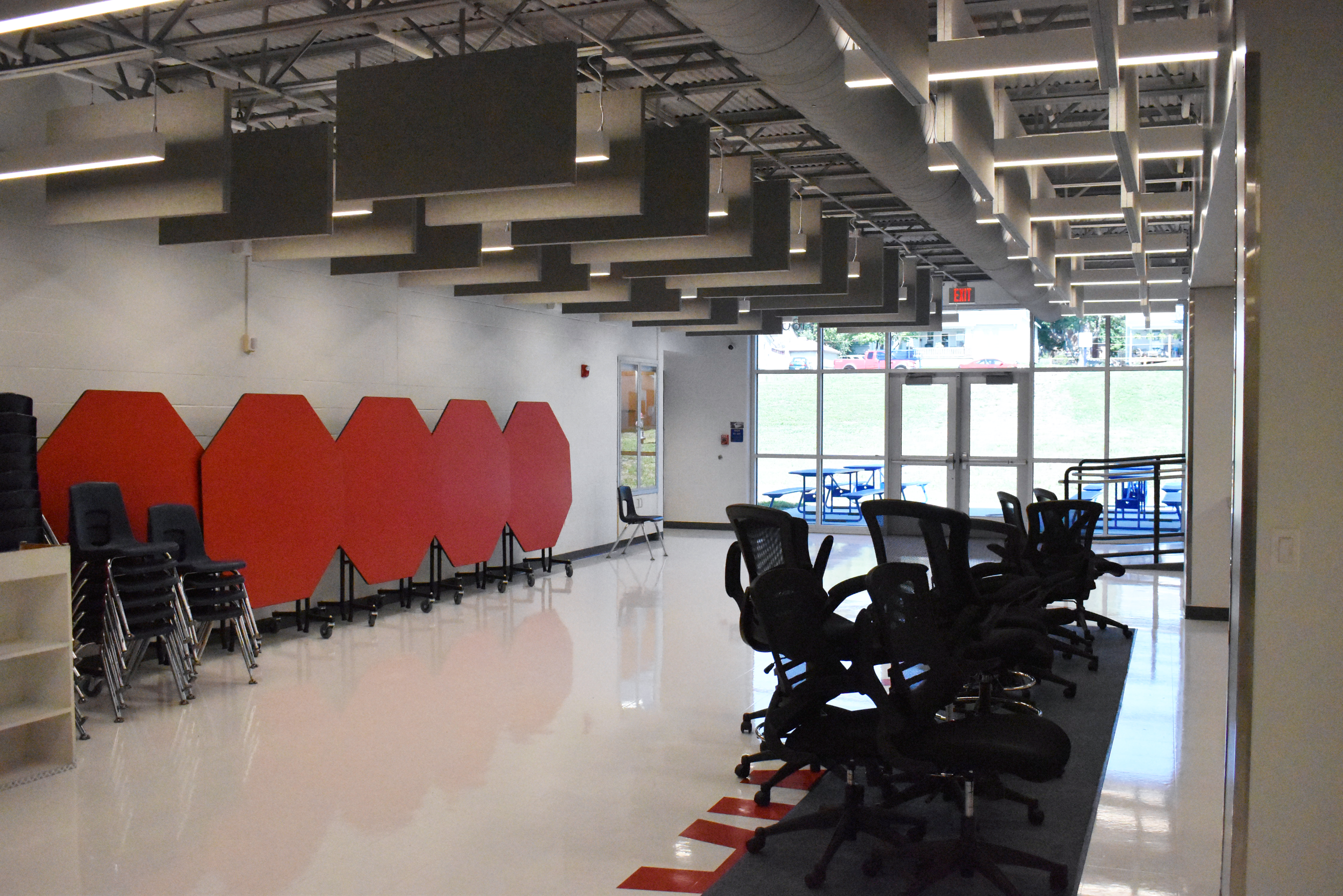 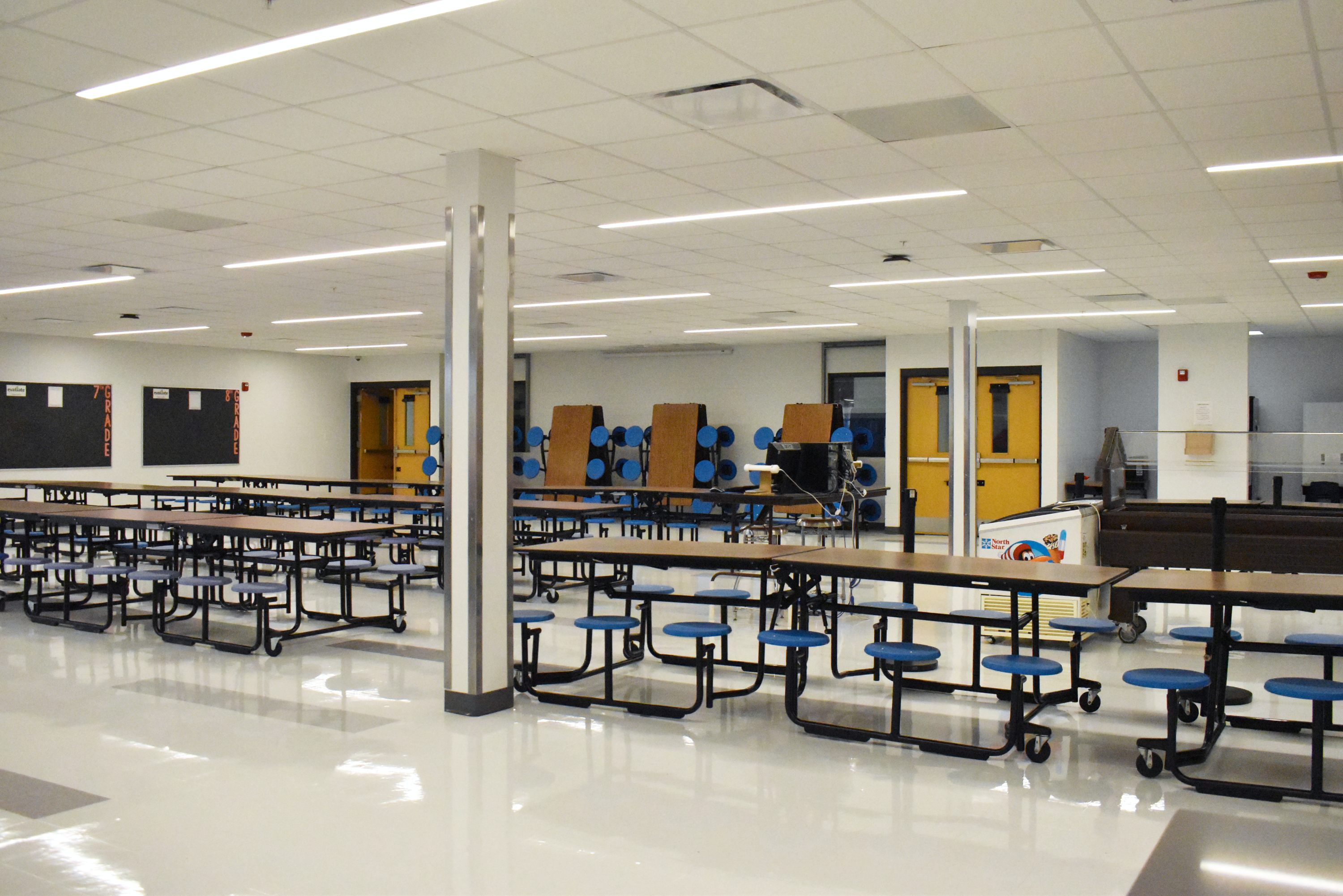 The existing half of the cafeteria is seen Aug. 5, 2022, at California Middle School. The cafeteria was expanded into the newly-constructed addition at the school. The existing cafeteria received upgrades as well. (Democrat photo/Garrett Fuller) 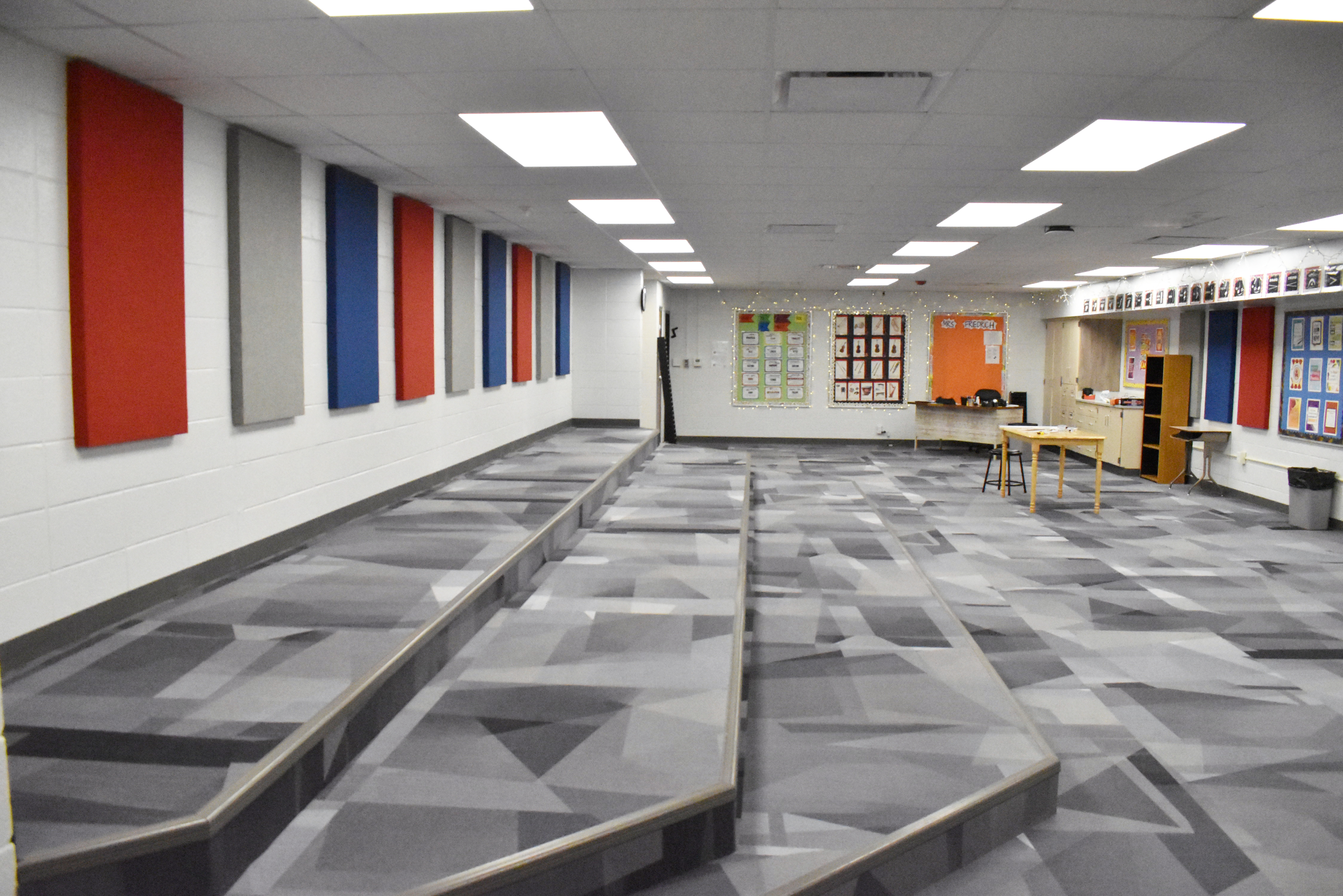 A recently-remodeled choir room is seen Aug. 5, 2022, at California Elementary School. The room was remodeled as part of the 2020 Bond Issue, which also added 22 new instructional spaces in a newly-constructed addition. (Democrat photo/Garrett Fuller) 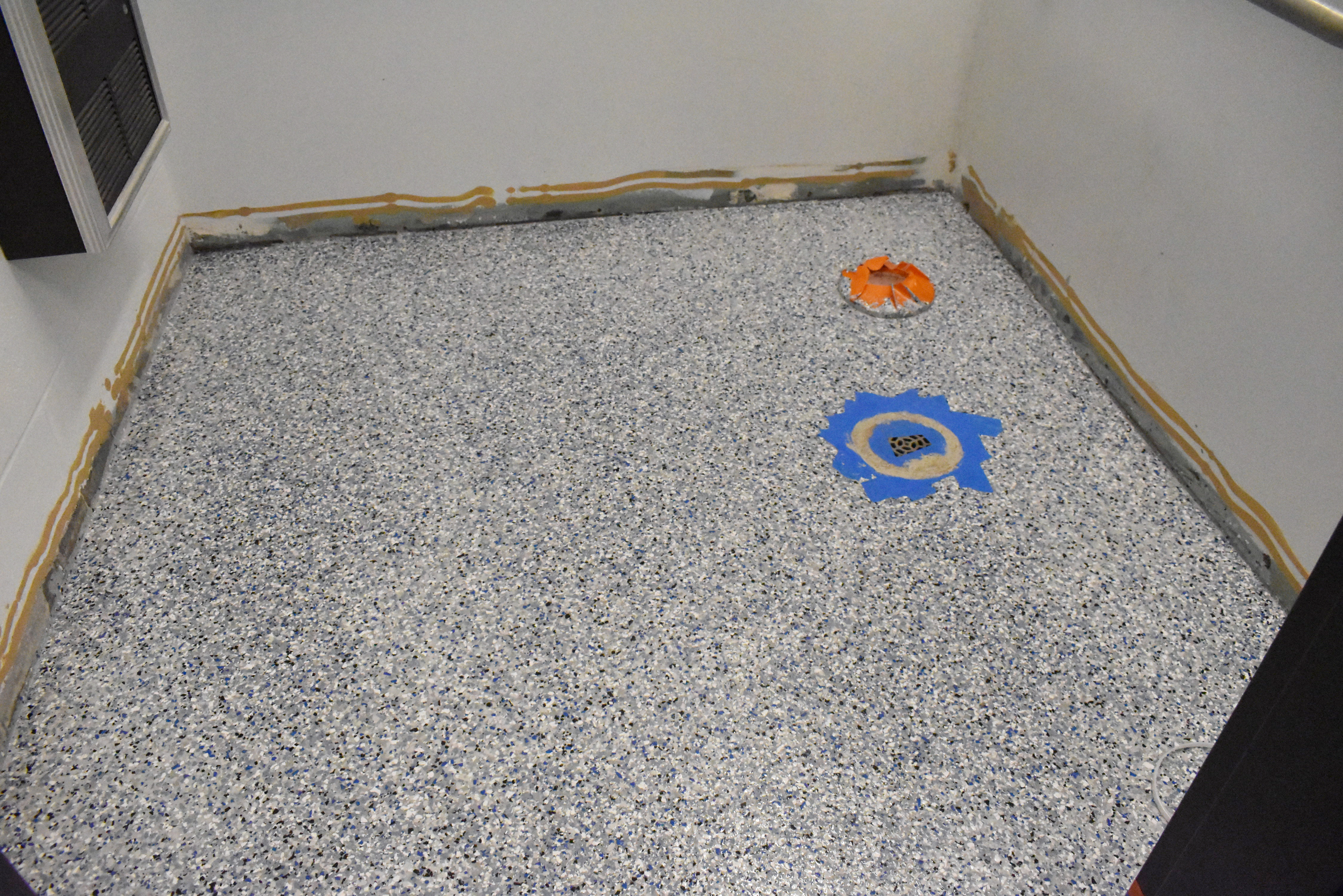 A recently-epoxied floor is seen Aug. 5, 2022, in a restroom in a kindergarten classroom in the newly-constructed addition at the California Elementary/Middle School campus. Due to supply chain issues caused by the COVID-19 pandemic, the special epoxy coating was unavailable until recently, resulting in the district using a temporary measure last year. (Democrat photo/Garrett Fuller) 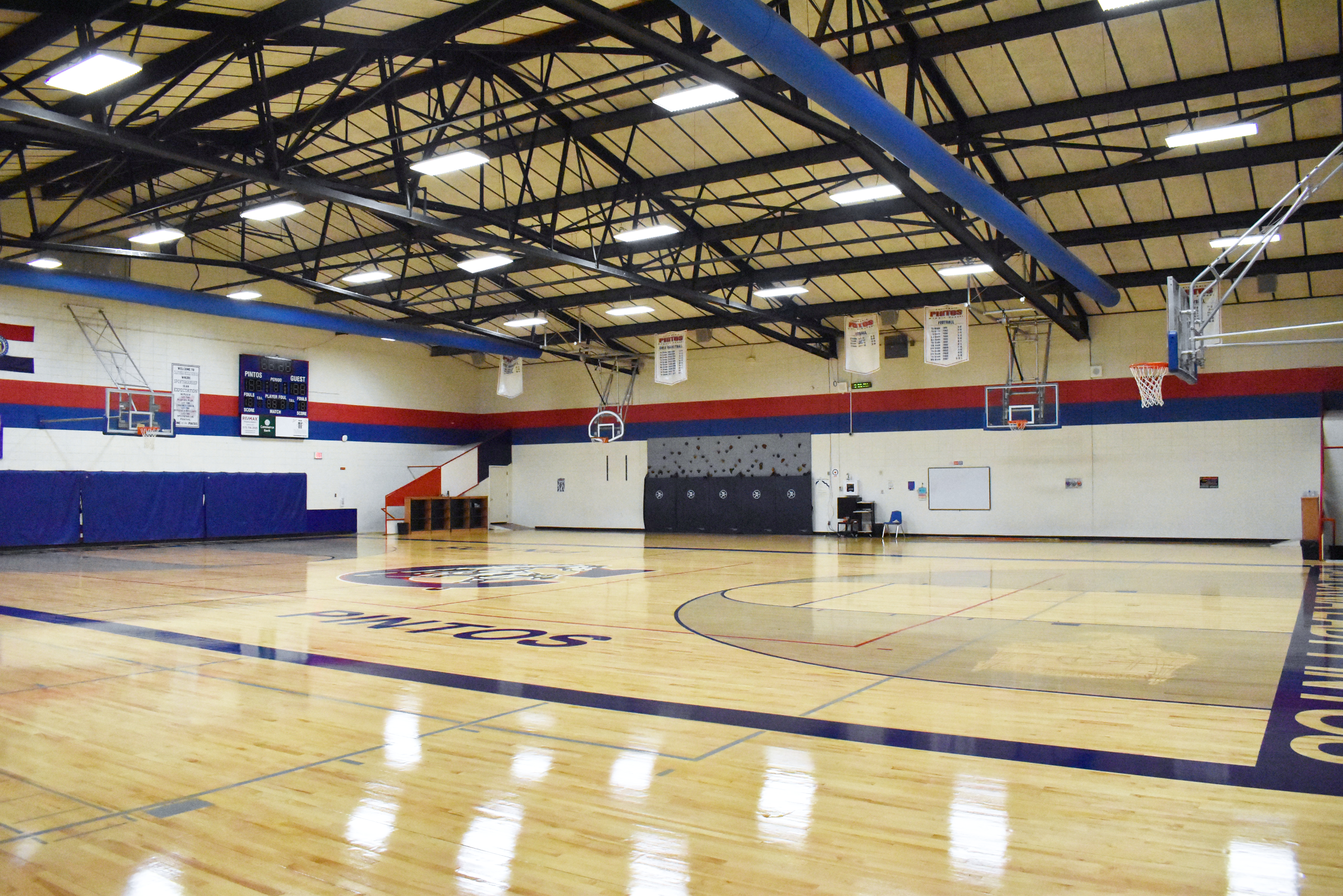 The freshly-installed floor in seen Aug. 5, 2022, in the gymnasium at California Middle School. (Democrat photo/Garrett Fuller) 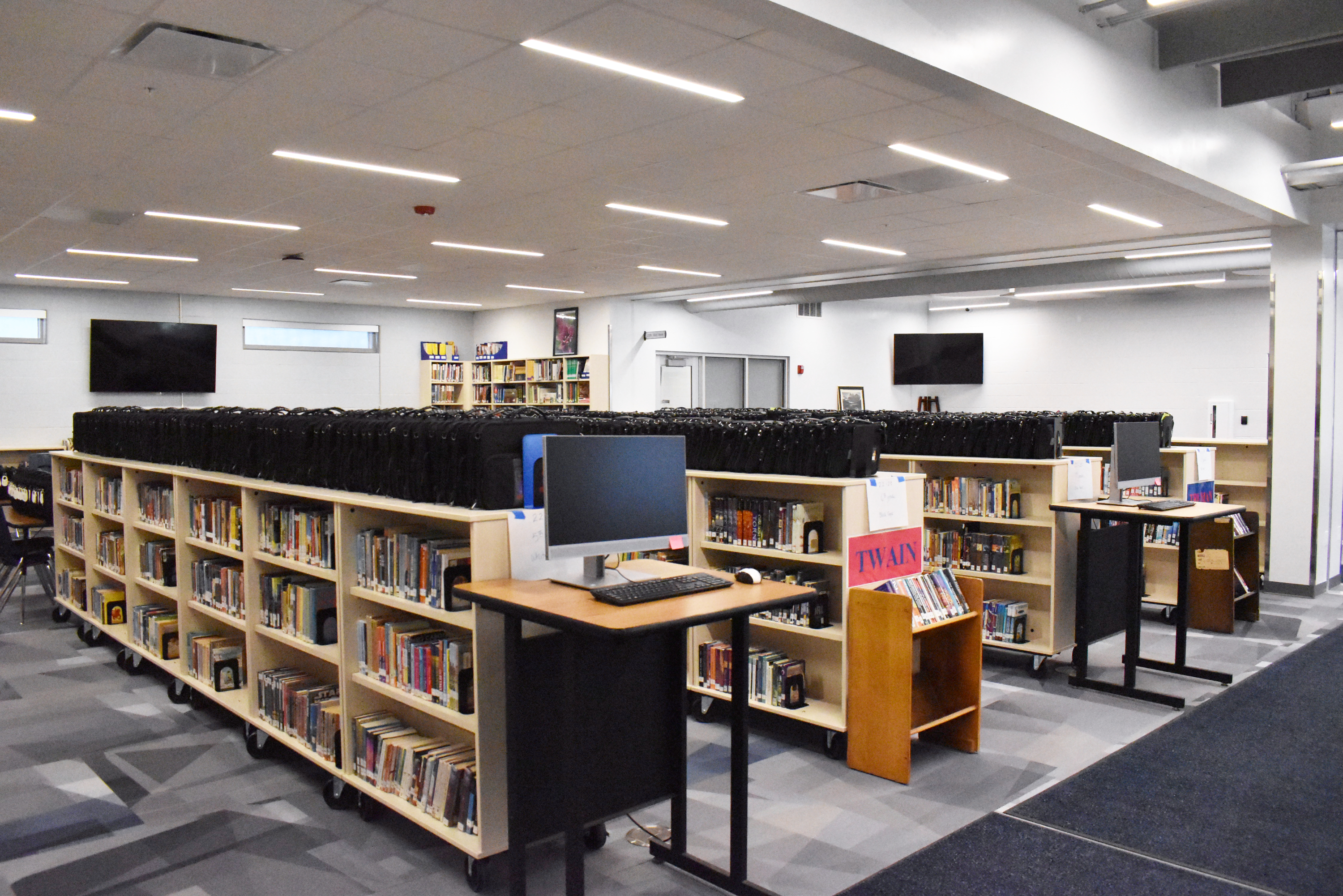 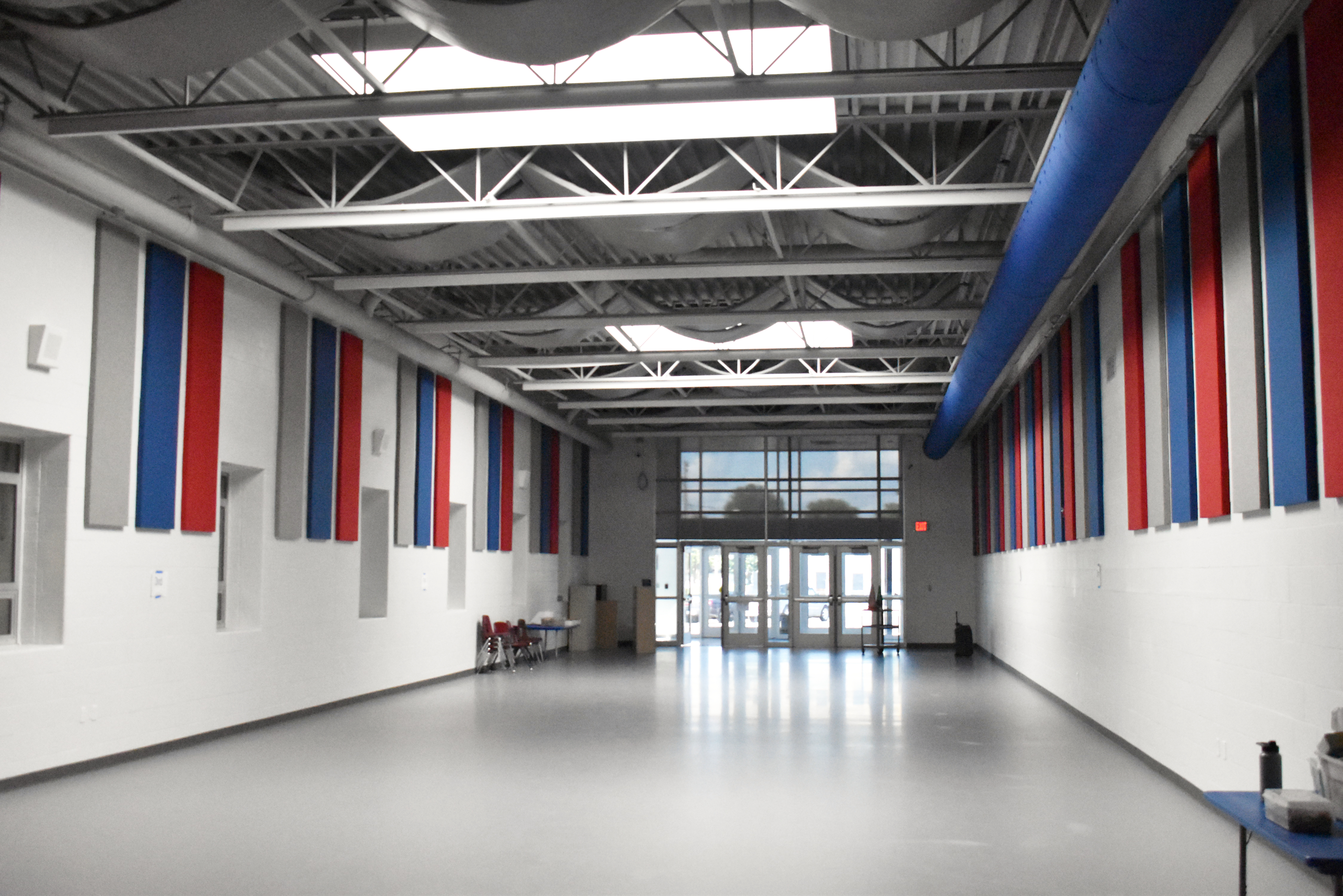 A new multipurpose room is seen Aug. 5, 2022, at the California Elementary and Middle School campus. The multipurpose room is part of the newly-constructed addition built as part of the 2020 Bond Issue, which consists of 22 new instructional spaces. The room is designed to be a holding area for students after being dropped off in the morning, for students waiting to be picked up in the afternoon and indoor activities and recess. (Democrat photo/Garrett Fuller) 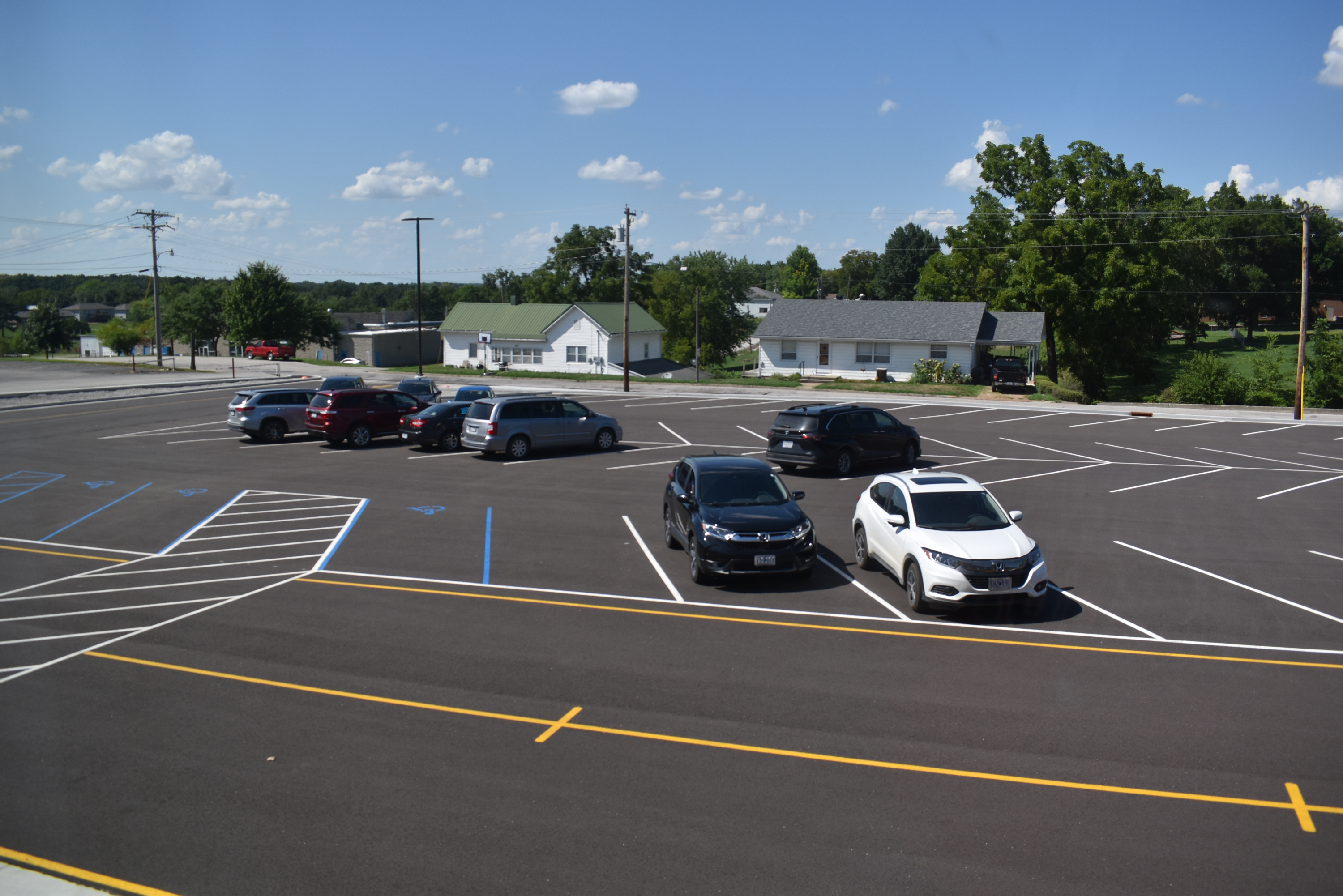 A new parking lot is seen Friday (Aug. 5, 2022,) on the northwestern side of California Elementary School, occupying the spot where two former buildings once stood. (Democrat photo/Garrett Fuller) 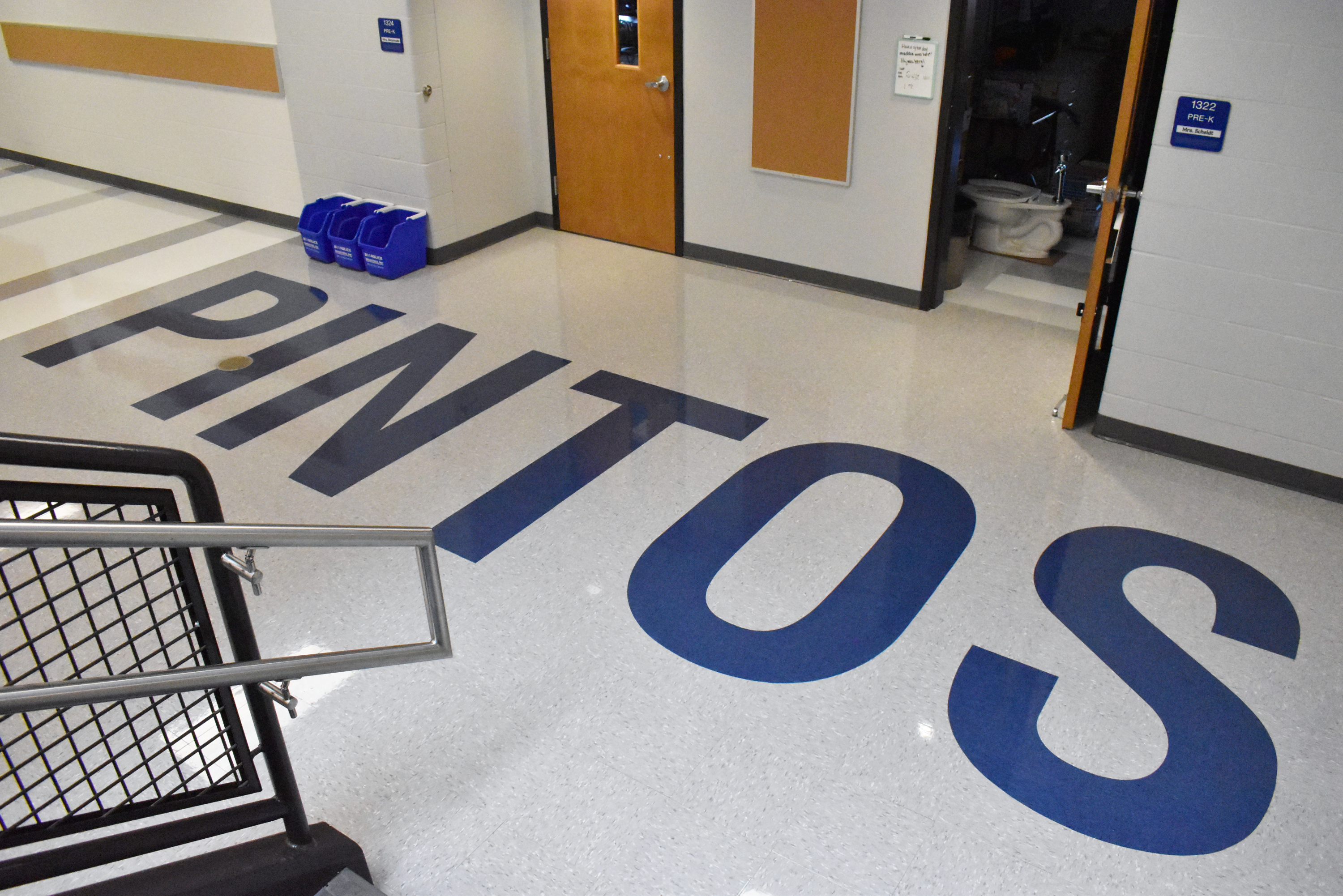 The word "PINTOS" is spelled out on the floor Aug. 5, 2022, in the newly-constructed addition at the California Elementary/Middle School campus. The addition, constructed with funds from the 2020 Bond Issue, adds 22 new instructional spaces. (Democrat photo/Garrett Fuller) 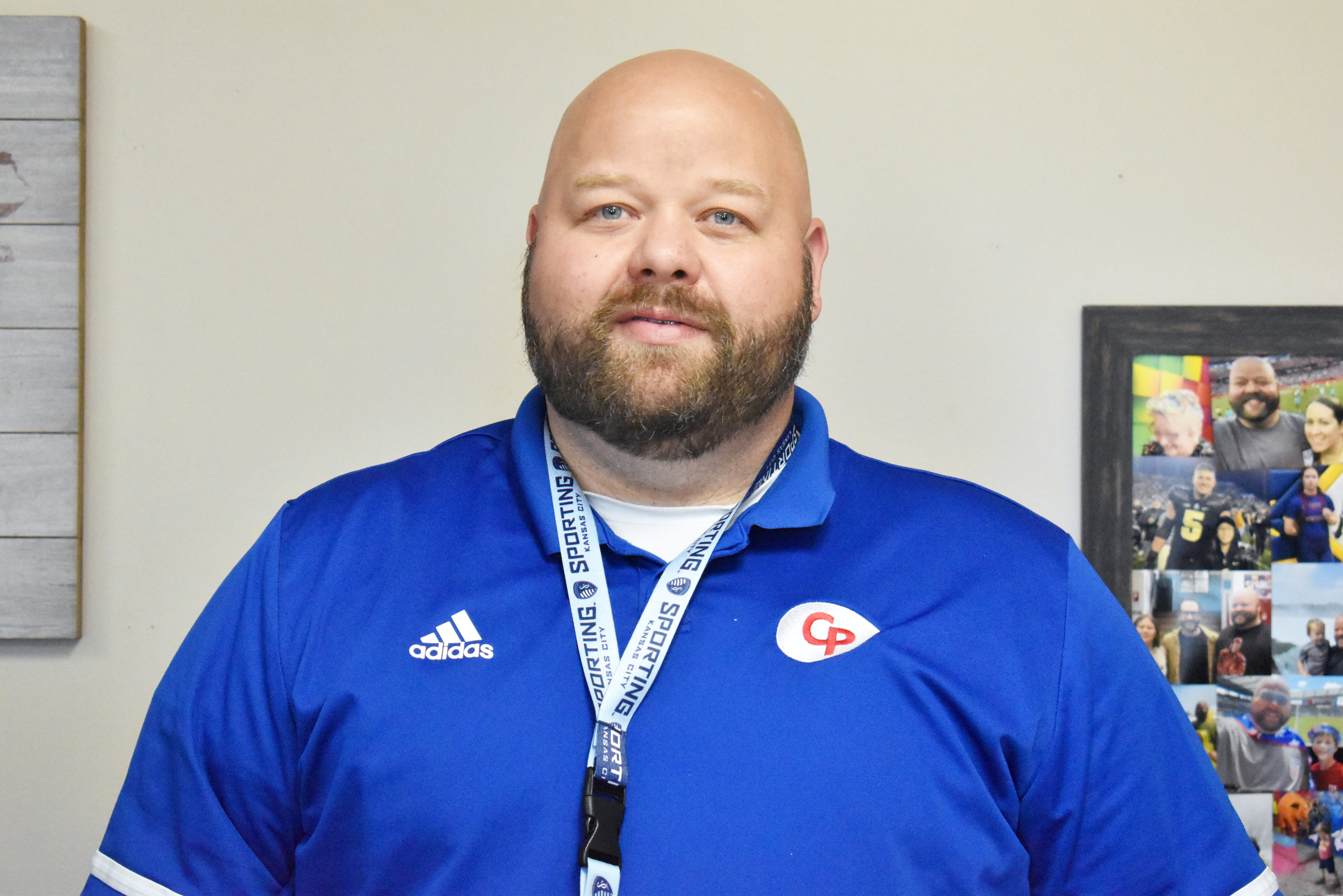 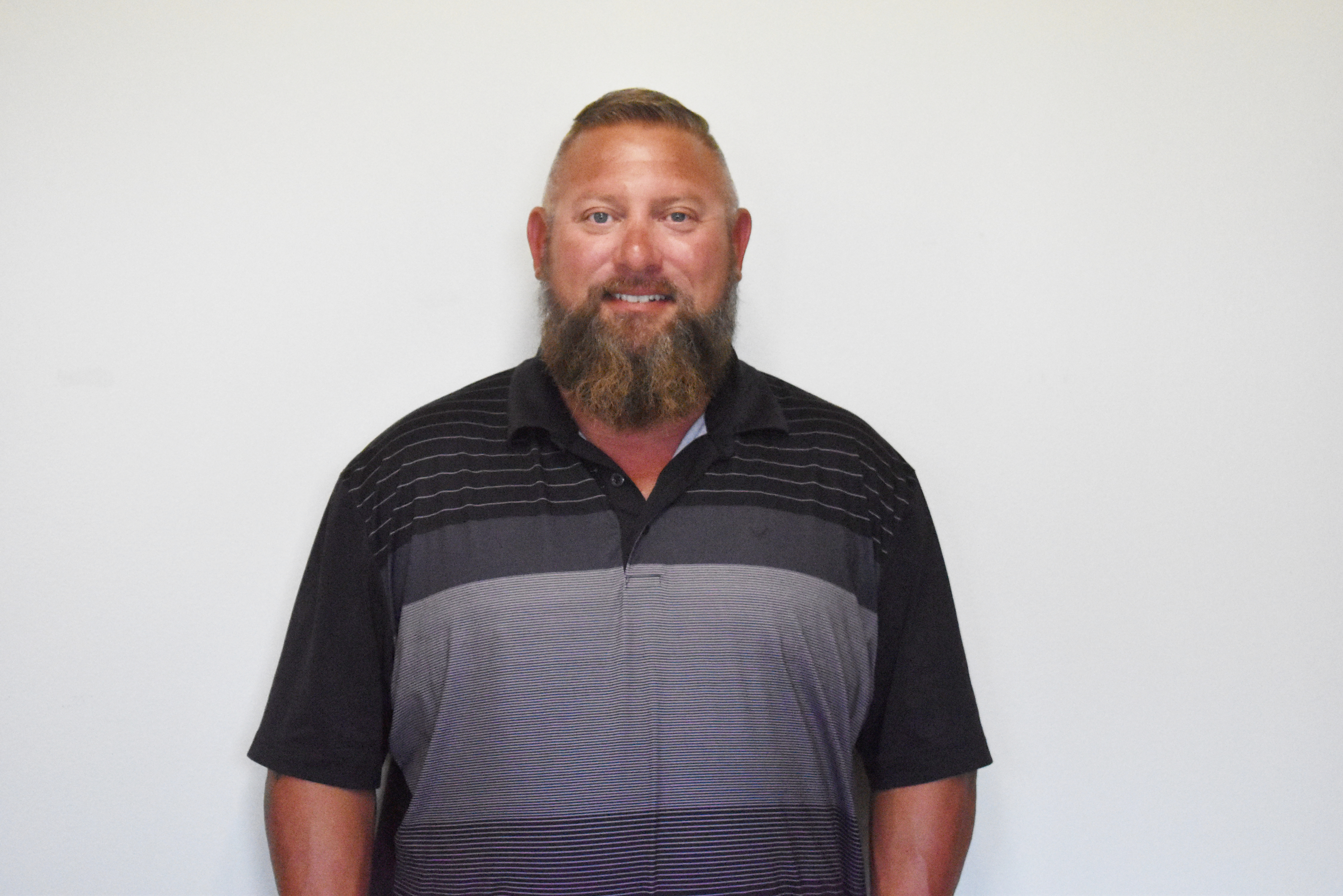 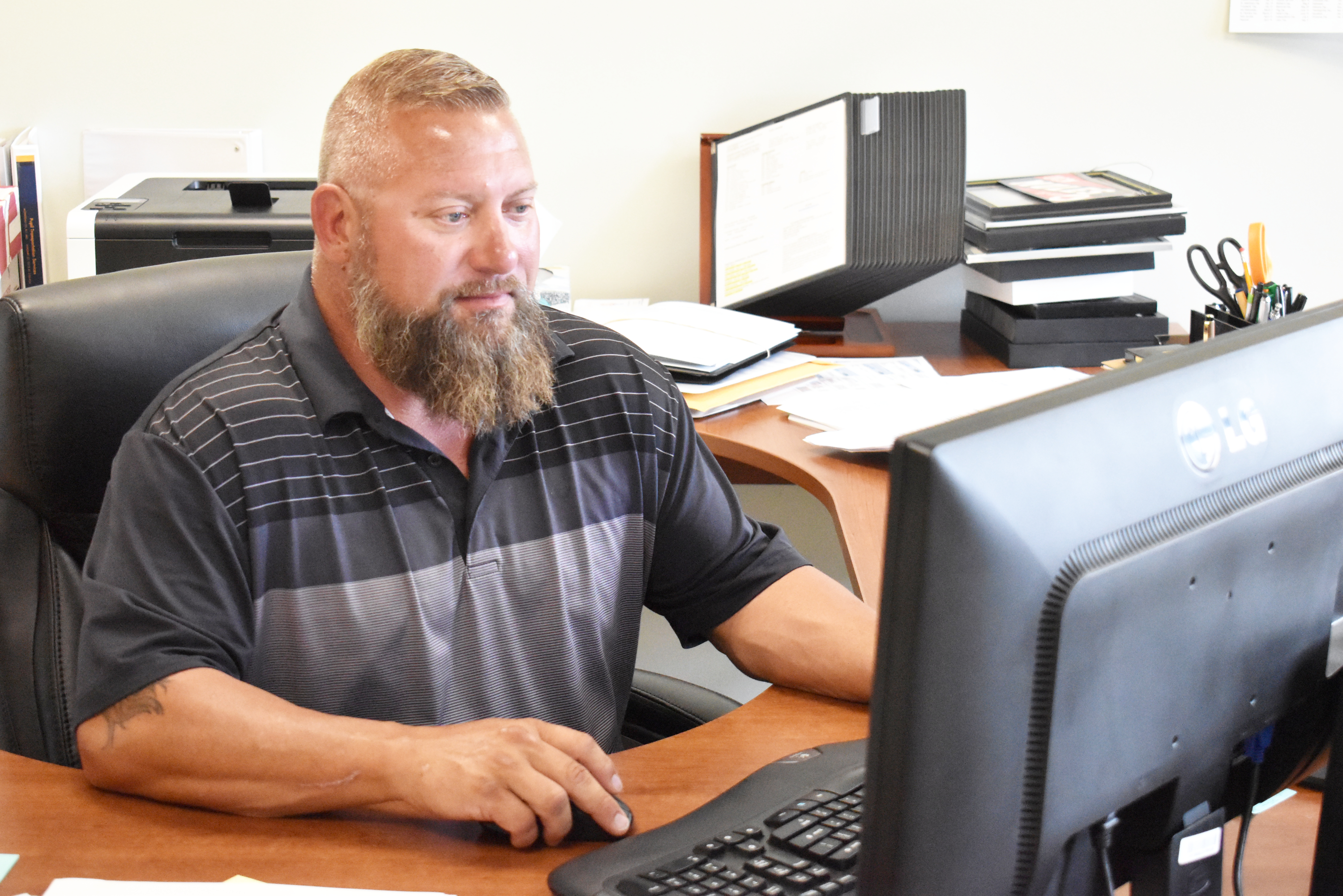 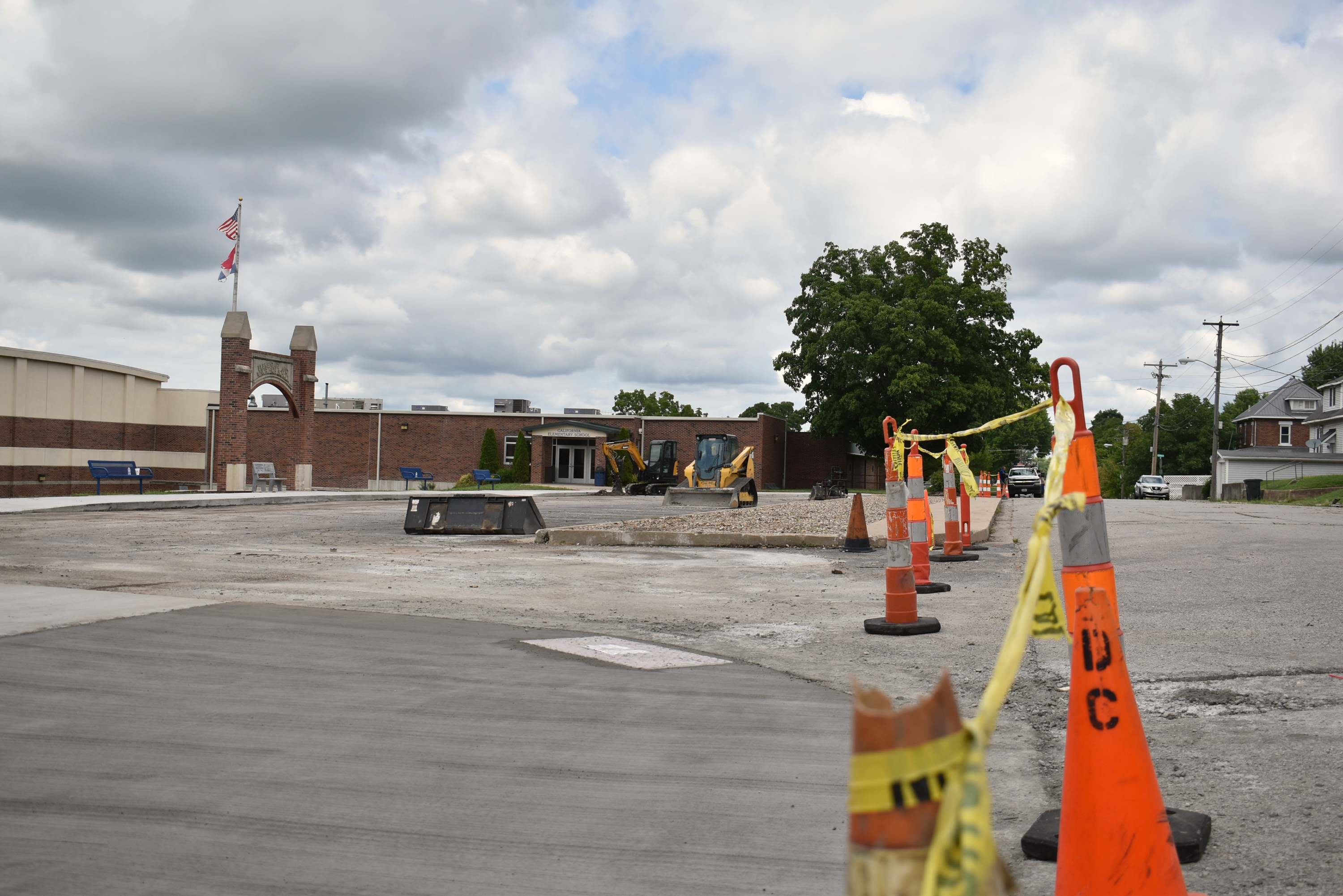 A skid-steer loader and excavator sit inside the circle drive Thursday (Aug. 4, 2022,) at the California Elementary/Middle schools campus while repairs are made to the sidewalk. California R-1 School District Superintendent Daniel Williams said the finishing touches on construction projects district-wide are due to be complete by Aug. 15. (Democrat photo/Garrett Fuller)