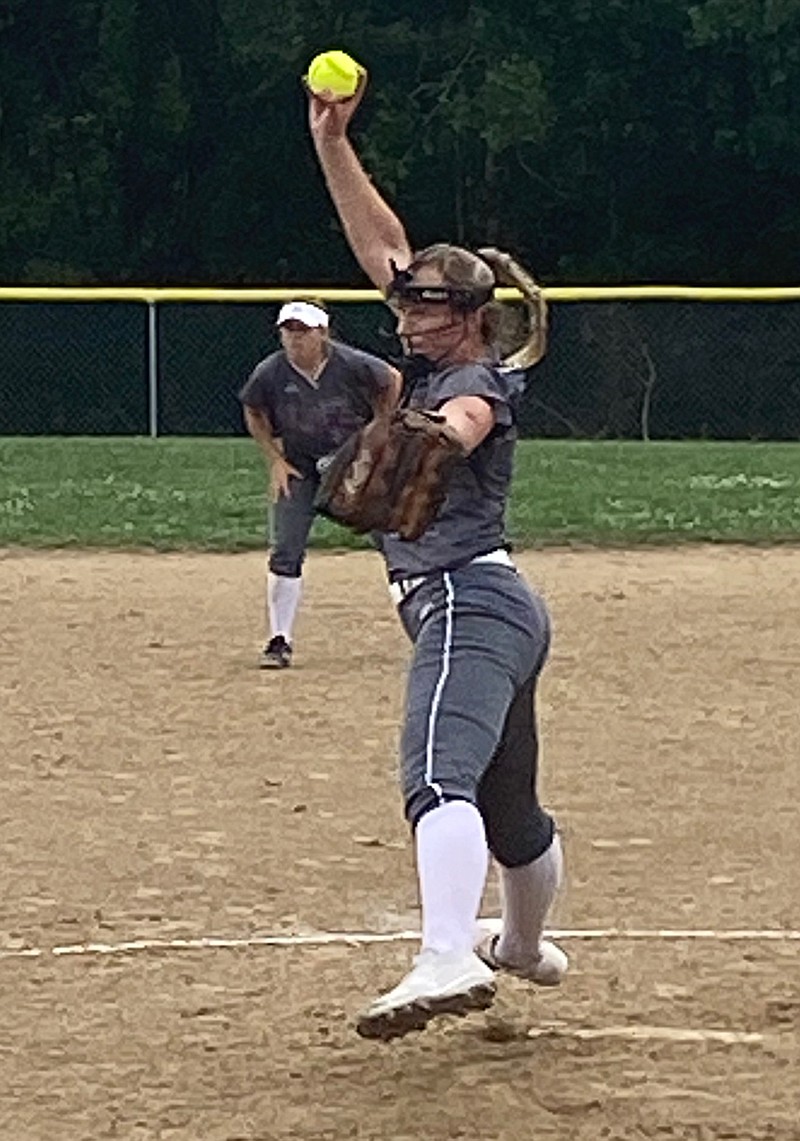 California High School softball was the underdog Monday night when they traveled to St. Elizabeth to take on the Lady Hornets, who finished third in the Class 1 state tournament last fall. The Lady Hornets were in control of the game for six innings with a 4-0 lead, but out of nowhere came the Lady Pintos with a five runs in the top of seventh to pull off a surprising 5-4 upset of St. Elizabeth.

Coming into the contest, the Lady Pintos lost two of three games at the Marshall Tournament and looked to put those two losses to Iberia and Carrollton behind them. The pitching matchup in the game would be senior Gabrielle Rohrbach for California against sophomore Dani Heckemeyer of St. Elizabeth.

The Lady Pintos managed to get six runners on base in the first five innings, but were not able to get those runners home. Although the Lady Pintos stayed in the game with key defensive plays, including two pick-off throws to second base by catcher Addie Clay, California knew it would be all for naught if they couldn't put runs on the board.

The score stayed 3-0 going into the bottom of the fifth. The Lady Hornets had runners at first and second with one out. Rohrbach's 2-1 pitch was handled by Clay, who faked a throw and then made a throw to trap the runner between second and third. However, the Lady Pintos infielders threw the ball between them instead of chasing down the runner and both runners safely advanced to second and third. California head coach Steven Stock became irate at the miscommunication which led to a fourth run for the Lady Hornets later in the inning.

The Lady Pintos were down to their last three outs in the seventh inning and down by four runs. Everyone in the stadium thought the game was over and St. Elizabeth would win. But to the surprise of everyone, the Lady Pintos were not ready to go home yet. Heckemeyer gave up two walks to start the inning and then a single to load the bases. California senior Ella Percival followed with a double to left fielder to bring home two runs and cut the lead to 4-2.

California then got a third run on a ground out to first base to score a runner from third. But they still needed one more run. That run came on a single to left field by catcher Addie Clay that got passed the left fielder for a game-tying RBI to tie the game at 4-4. Stock then substituted freshman Kinley Higgins for Clay as the courtesy runner. Two batters later, senior Grace Dampf stepped up to the plate with Higgins on second base with two outs. Dampf hit the 2-2 pitch to deep center field to score Higgins from second and complete a stunning four-run comeback and take a 5-4 lead.

In the bottom of the seventh, Rohrbach had one out but allowed two walks and put both the tying and winning runs on base. Stock decided to take a risk and bring in freshman Peyton Dunham to try and finish the game. Dunham struggled in her warm-up, but found her rhythm and made the final two outs of the game on ground balls to her. California completed their seventh-inning comeback and earned a 5-4 win in St. Elizabeth.

"We moved up a little early and give credit to their girl who hit a big two-run home run and at 3-0, its easy to sit down and quit. Gabby gutted it out and shut them down for five innings. So she was tremendous," Stock said. "She competed and when she got a little tired, we went and got a fresh Peyton and got it done."

Coach Stock was very proud of his team for not giving in when they could have. The Lady Pintos left nine runners on base in the game, but managed to score their runners when they needed too.

"You've got to give credit to them," he said. "Their pitcher was good early. We didn't get much done and I felt like our kids the second time around made some adjustments at the plate. We probably left nine or ten runners on base. We did a good job of getting on base. We just couldn't seem to get that big hit. All of sudden, we got a couple in the last inning and got two or three big hits. We played a game last weekend and I felt like we played not to lose. I think we took a step today. Because they didn't play not to lose. They played to win the game and did. Give credit to these kids. They came out fought, battled, and never quit. You come back and beat somebody 5-4 when you score all five in the last inning, that's a lot of grit. And that's all we could ask for from our kids."

The win over St. Elizabeth for California was quite similar to their win on opening night at Sedalia Smith-Cotton, where they also scored five runs in the seventh inning and defeated the Lady Tigers 8-5. So far in the young season, five has been the lucky number for the Lady Pintos.

"Simply put, we work on things and you've got transfer it to a game," Stock said. We have three rules for our run-downs that make them very simple. We just simply didn't put those into play on that play. We had an out we could've got. We didn't get it and it cost us a run. Which a lot of times in that kind of game, that runs beats you. The kids overcame it. So we'll play again tomorrow and Wednesday. The first thing we'll work on is those run downs again." 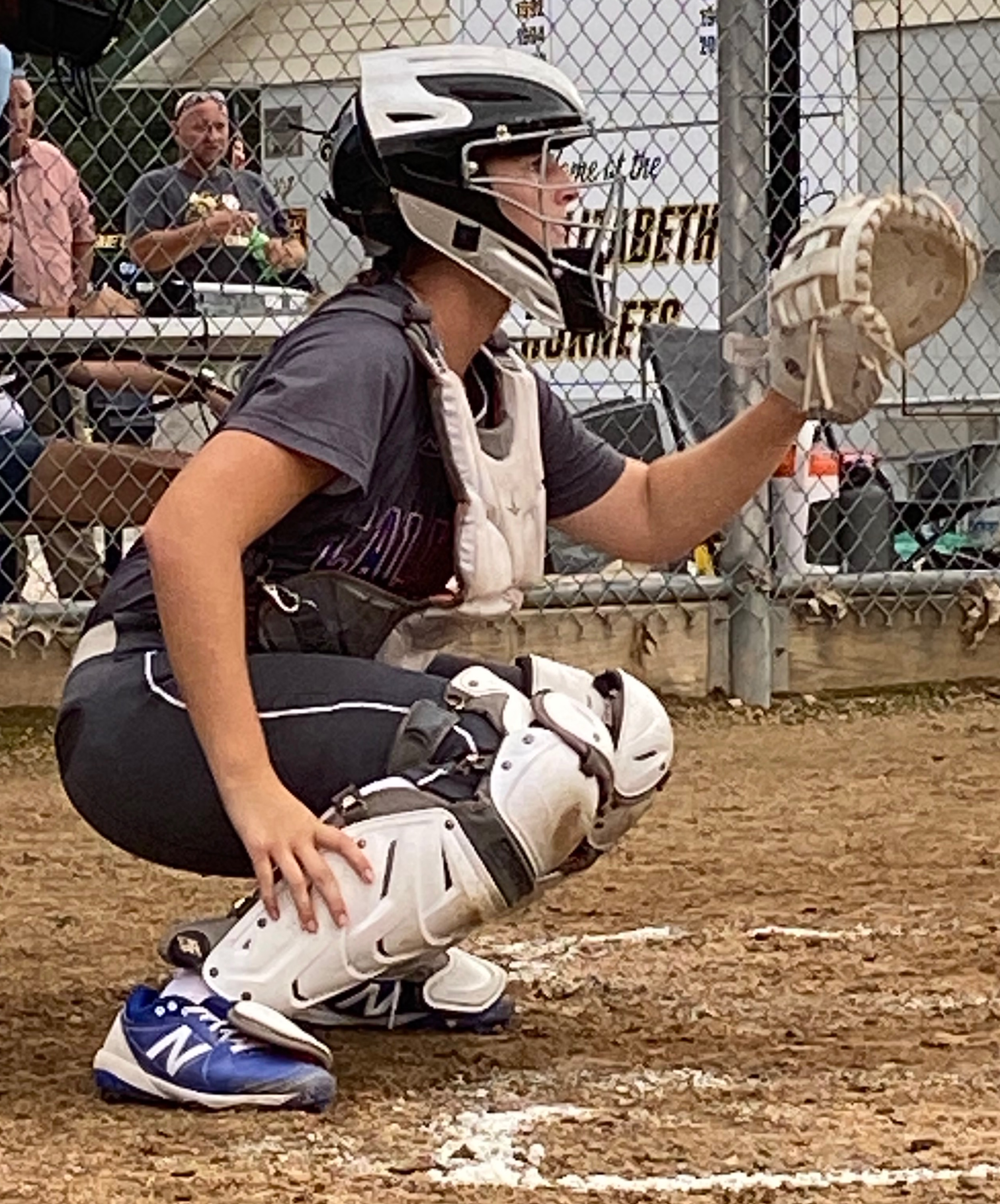 Junior catcher Addie Clay made two cutoff throws to second base for outs in the fourth and fifth innings. (Democrat photo/Evan Holmes) 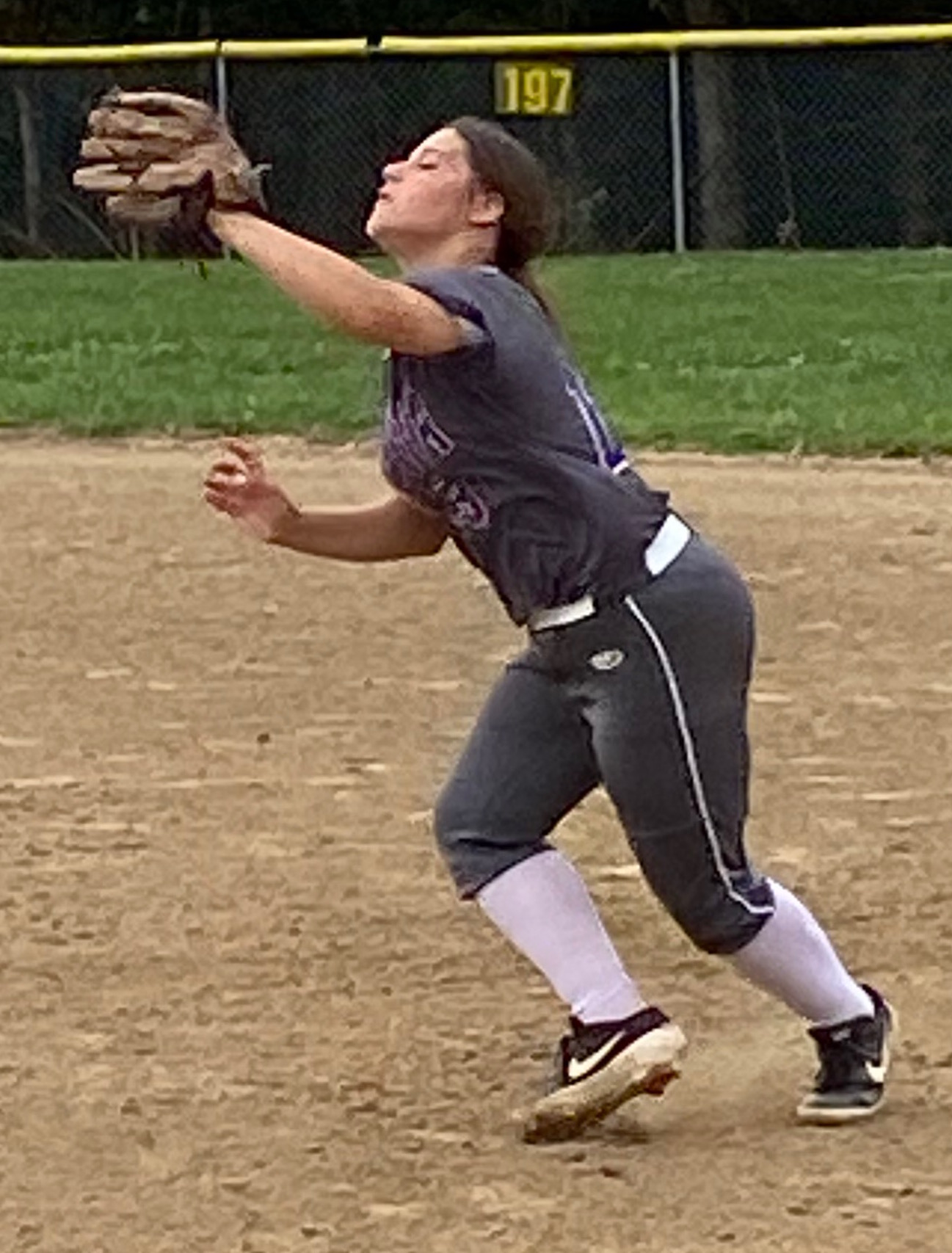 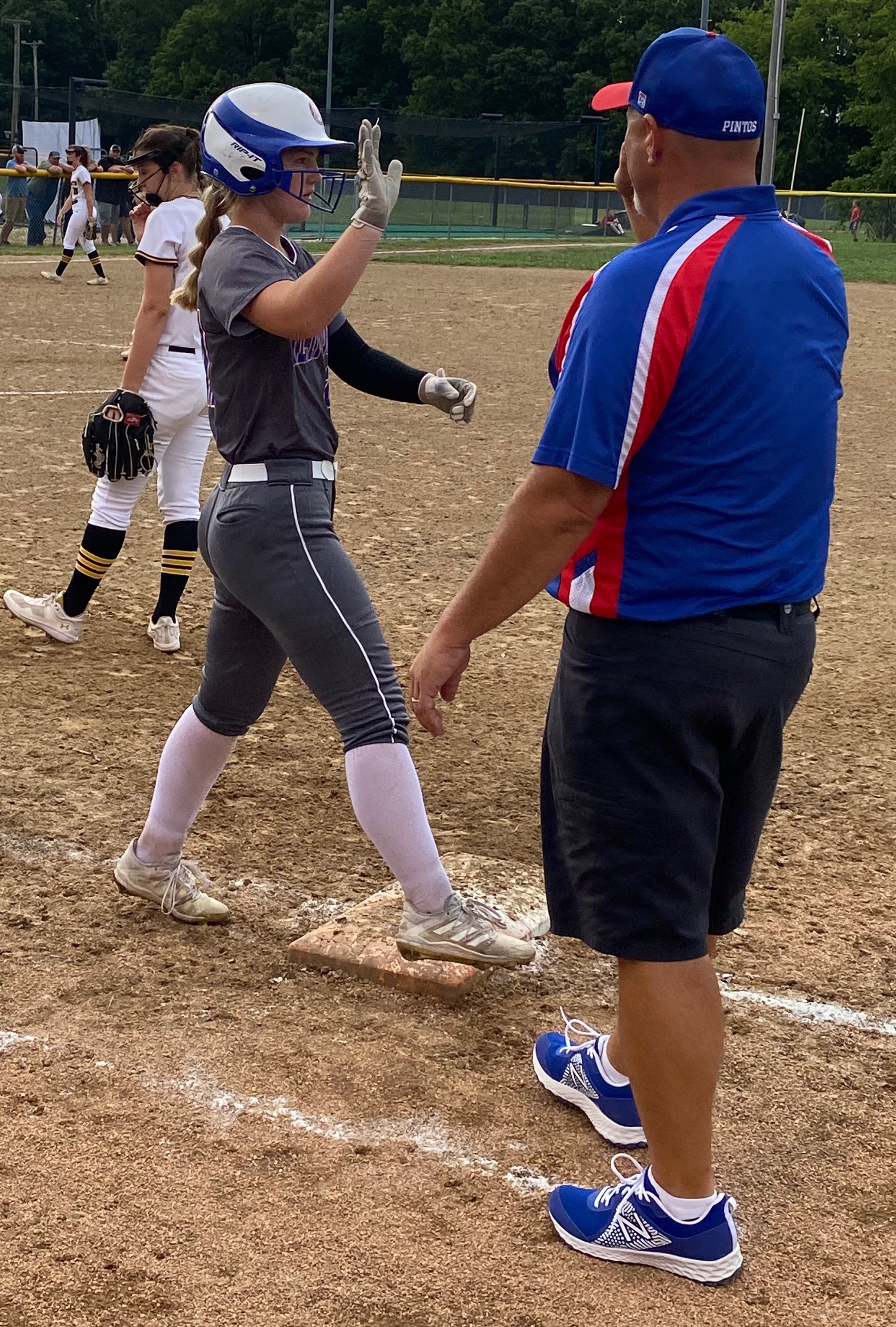 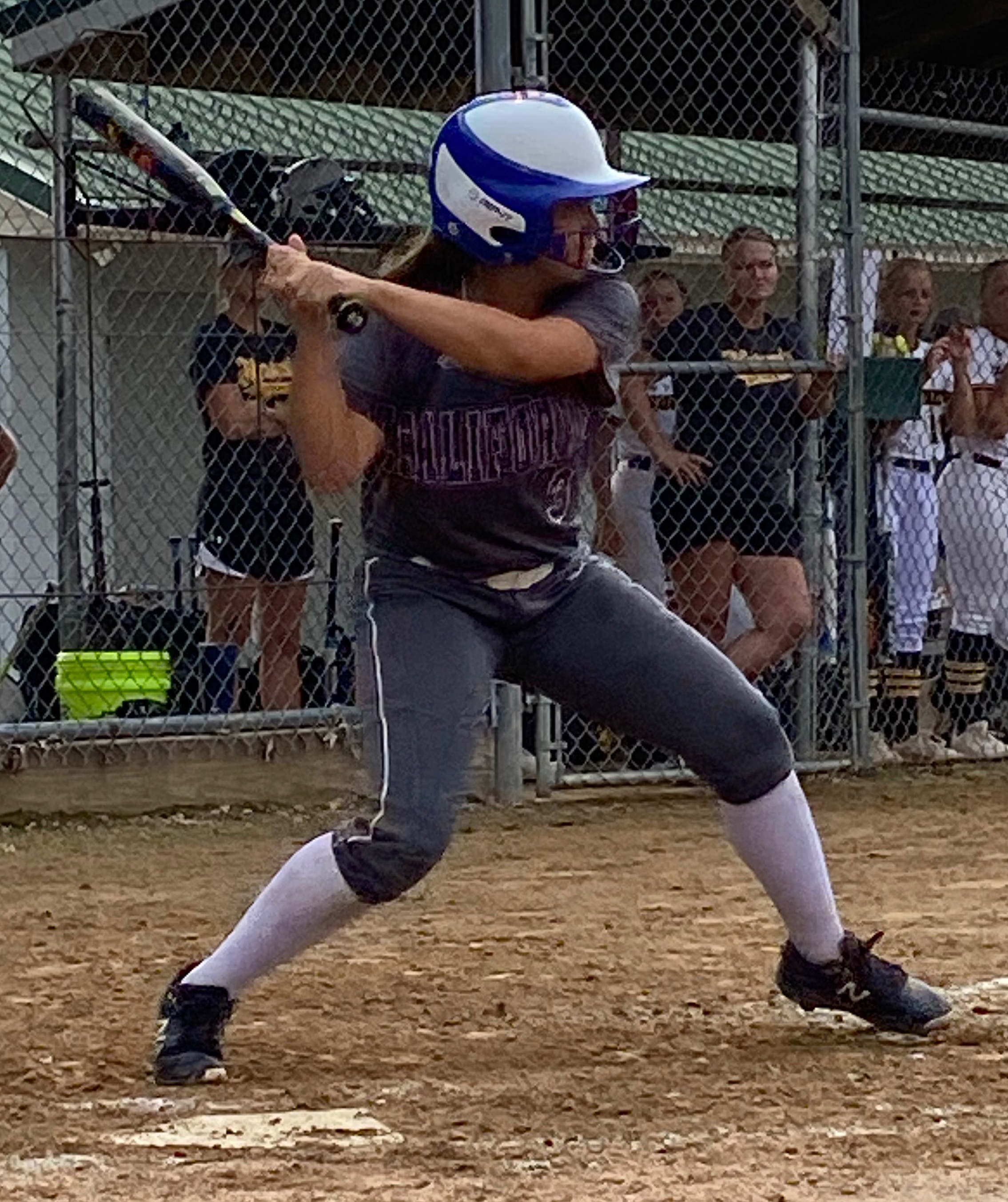 Senior Ella Percival hits an RBI single in the seventh to cut the Lady Hornets lead to 4-2. (Democrat photo/Evan Holmes) 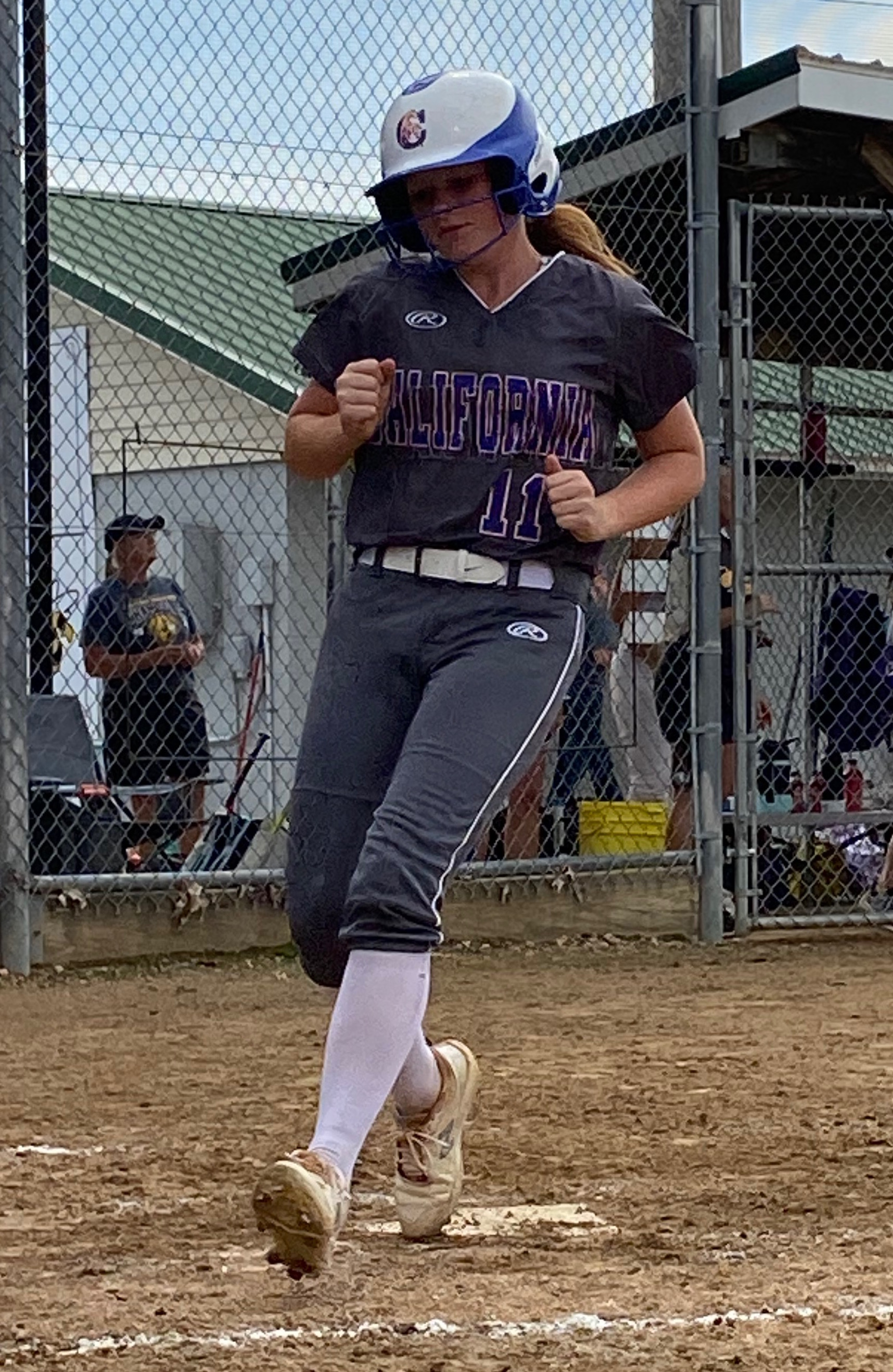 Freshman Ryleigh Roellig scores to make it a 4-2 game in the seventh inning. (Democrat photo/Evan Holmes) 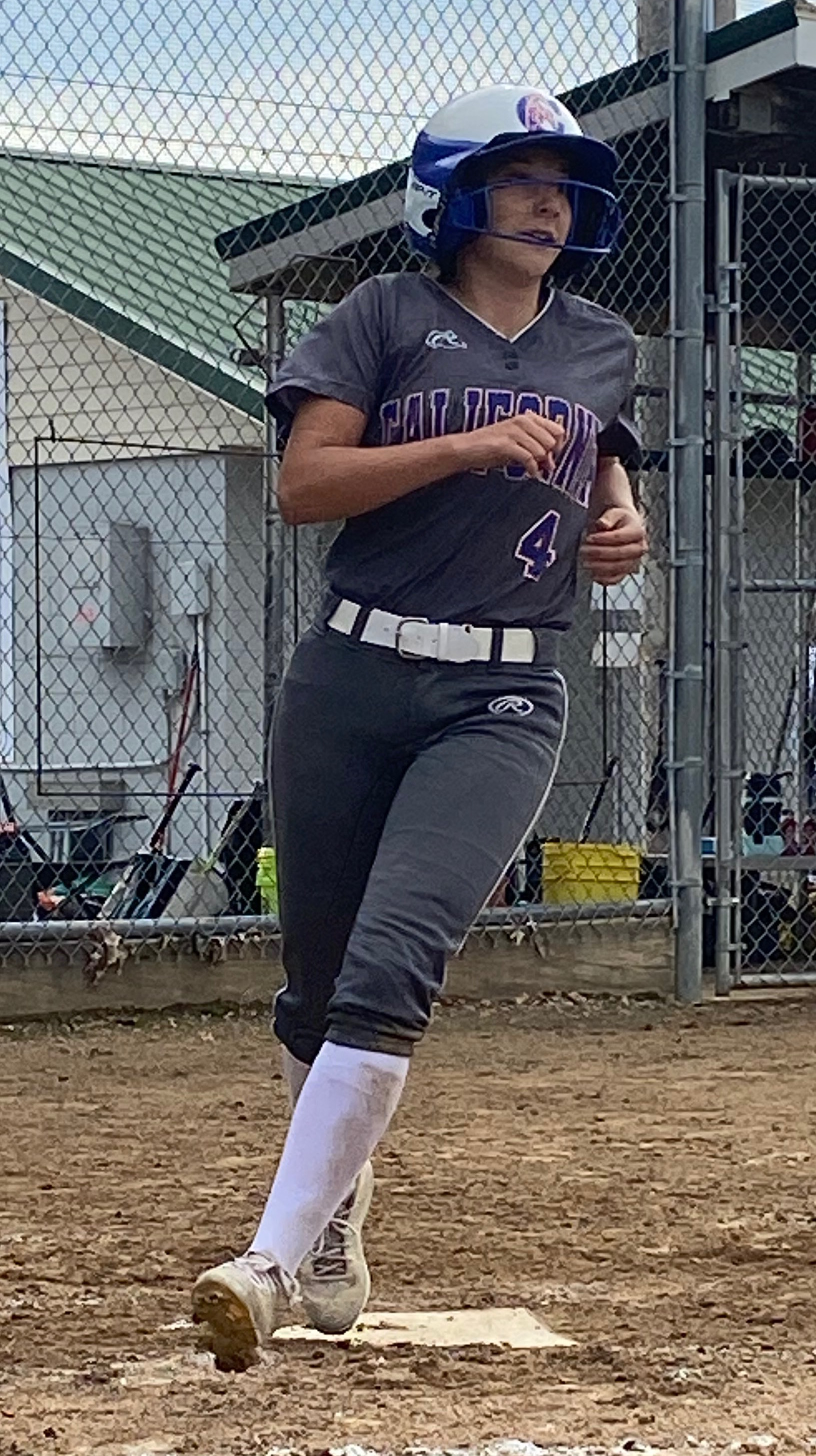 Courtesy runner Kinley Higgins scores the go-ahead run for California in the seventh off an RBI single from Grace Dampf. (Democrat photo/Evan Holmes) 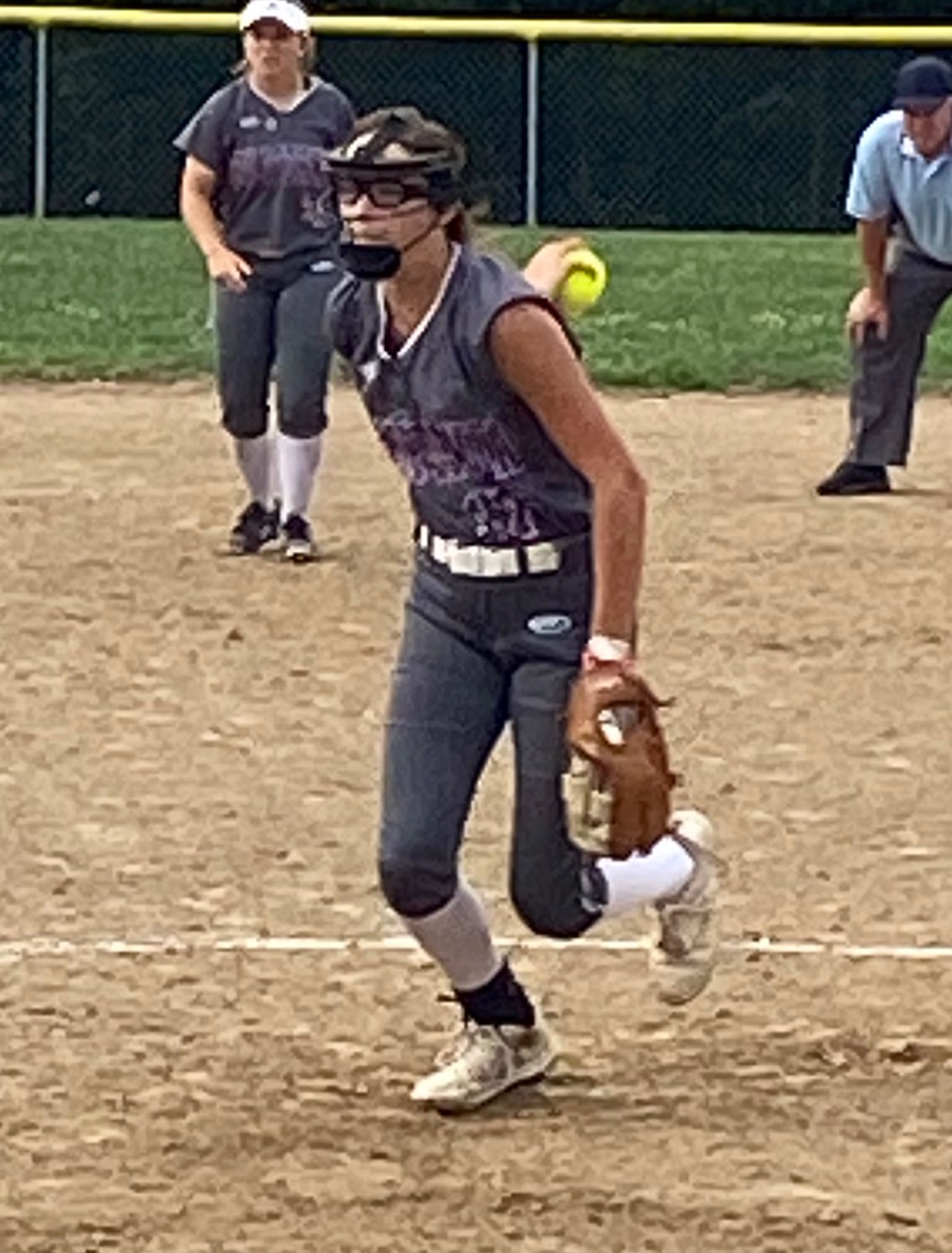 Freshman Peyton Dunham got the save for California by making the last two outs of the game. (Democrat photo/Evan Holmes) 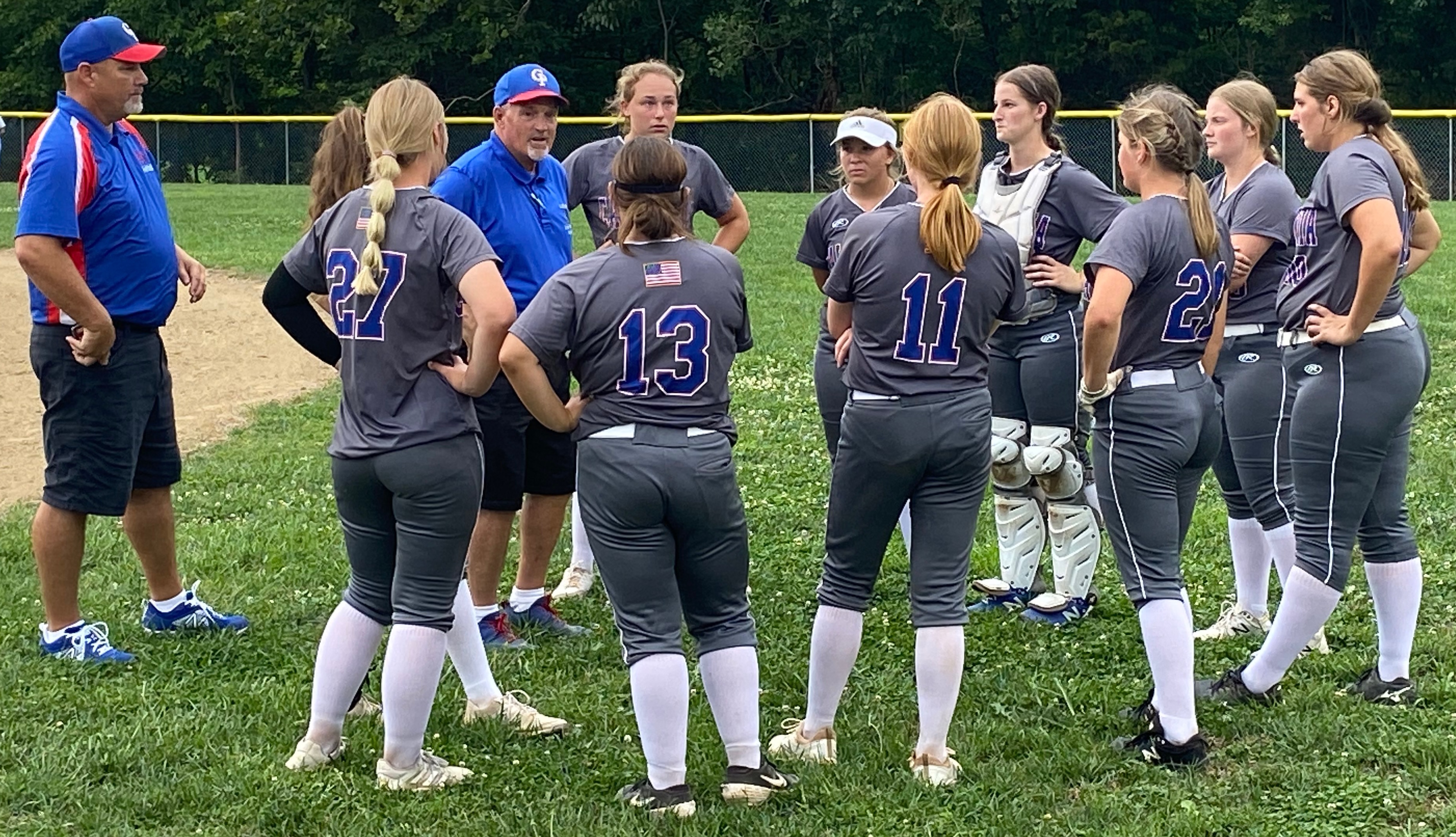