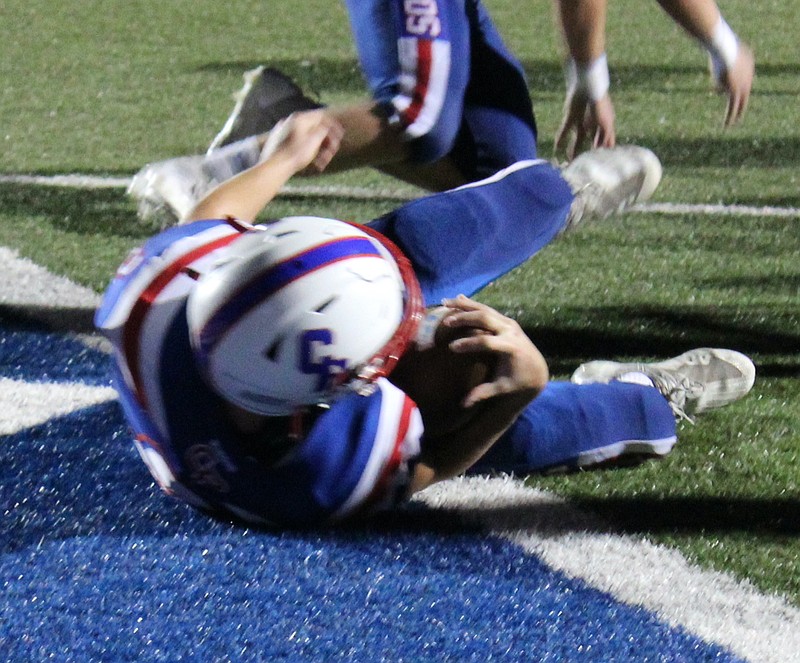 Sophomore running back Brooks Volkart dives into the end zone for a game-tying touchdown in the fourth quarter. (Democrat Photo/Evan Holmes)

The game went back and forth for most of the night, until the Savages capitalized off of two late turnovers by the Pintos and walked away with a 47-34 win against California.

Savannah won the opening coin toss and chose to defer to the second half. But things did not go according to plan for the Pintos on the opening kickoff when it was fumbled and recovered by Savannah. Two plays later, Savannah scored the first points of the game on a 34-yard touchdown run.

It was a heavy blow to the Pintos to start the game and there was early tension in the crowd. But it didn't last long.

Led by junior quarterback Martin Kilmer, the Pintos countered back 78 seconds later with a 15-yard touchdown pass from Kilmer to fellow junior Ayden Bryant. The 2-point conversion was no good and the score was 7-6.

The score was 14-6 going into the second quarter. California had not been able to stop Savannah's running game. Savannah continued the trend to open the second quarter and were on the verge of another score. The Pintos defense tried to hold their ground and held the Savages to a fourth-and-3 at the California 6-yard-line. Savannah decided to try a 23-yard field goal. The kicked missed to the left of the upright and was no good.

California got the stop the were looking for and were now back to their offense. Just like Savannah before them, California faced a fourth-and-short on their ensuing possession. California coach Seth Womack made a gutsy call by choosing to go for the first down instead of punting the ball away. Sophomore running back Brooks Volkart got the hand-off from Kilmer, lost his footing, and it looked like he would fall short of the first down. But Volkart stayed on his feet and not only picked the first down, but took it the end zone for a 71-yard touchdown run. Kilmer completed the 2-point conversion to tie the game at 14.

Womack said that the fourth-down conversion and touchdown by Volkart was one of the biggest plays of the night for the Pintos. But at the same time, he wasn't surprised because Volkart has been one of California's best players during the offseason and Womack knew his work ethic would show up on the field.

"I would say Brooks TD run was for sure the biggest play for us. It got our momentum back," Womack said. "The dude lives in the weight room and out works and out competes everyone. He knows the weight room and his off season preparation is what is going to make him successful. All of our kids are seeing this in their own game."

The teams traded touchdowns in the closing minutes of the second quarter. Despite almost giving up a pick-six on the final play of the first half, California took a 22-21 lead into halftime.

The Savages began the second half on offense and went back to their running game to try and retake the lead. Savannah's offensive line continued to play well and made openings within the California defense. After overcoming an interception by Bryant, the Savages retook the lead on another rushing touchdown. This one on a 62-yard run to go ahead 27-22 with 8:58 to go in the third quarter.

On California's next possession, Bryant injured his leg going for a catch. But was able to walk off the field under his own power.

"AB is truly a special player, there will not be many guys that can play him 1-on-1 and he did a great job taking advantage of their secondary trying to keep just one guy on him," Womack said.

On a third down in Savannah territory, Kilmer saw junior wide receiver Walker Friedmeyer had gotten separation from his defender in the end zone. Kilmer connected with him for a 30-yard touchdown to put California back up by one at 28-27 with 6:44 remaining in the third quarter. California took that 28-27 lead into the fourth quarter.

Savannah began the fourth quarter with the ball on the California 17-yard line. Seven seconds later, they were in the end zone again on rushing touchdown, their fourth of the game on the ground that gave the Savages a 34-28 lead.

California now trailed again and needed another touchdown to get back in the game. Two penalties against Savannah on the following possession helped the Pintos get the ball to the 1-yard line. Two plays later, Volkart scored his second touchdown of the night to tie the game at 34 with 8:45 remaining.

At that point, all of the game's momentum shifted into Savannah's favor. First, the Savages went back to their running game that had been hard for the Pintos to stop all night line. The Savages retook the lead on a seven-play drive that ended with a 40-yard rushing touchdown. Although Savannah missed the extra point, they now lead 40-34 with 5:07 to go.

On the following kickoff, the ball was fumbled again and recovered by Savannah. The turnover deflated the Pintos and the older Savages capitalized with another rushing touchdown from 27 yards to take a 47-34 lead with 2:45 remaining.

Despite their efforts to make a 13-point comeback in the final minutes, California wouldn't find the end zone again and the first-ever meeting between Savannah and California.

The Pintos were outscored 20-6 in the fourth quarter.

"Several things went wrong. But ultimately I have to do a better job of getting our kids in positions to close out games," said Womack. "Our kids played their hearts out against a much older, bigger team and we stood toe to toe with them and had several opportunities to take it from them."

Womack gave a boat load of credit to the Savages for not only their win, but for also Savannah's running backs and offensive line for making the run hard to defend. Womack called Savannah's offensive line one of the best he's ever seen and did their jobs very well against a Pintos team that had more than 500 total yards of offense and didn't allow a sack.

The Pintos believed that the loss was one that could've been prevented with improvement in a couple of areas. In particular, defending the run and limiting turnovers. California gave up more than 300 rushing yards and 450 total yards, while committing five turnovers. Womack said inexperience might have played a factor in the loss to the Savages. But it doesn't take away from the mistakes that led to points for Savannah.

"I wouldn't say that it didn't have something to do with it. We are young and that's no secret. We have 6 seniors on the field and the rest are underclassmen, however that is no excuse and we have to do a better job as coaches to ensure our kids are equipped with the skills needed to be successful," Womack said. " All you can do now is watch film, see what you need to fix and move on. We can't dwell on the past as that is now out of our control. What we can control is how we prepare for Fulton and that is what we are going to do."

The Pintos will look to respond this Friday when they travel to Fulton to face the Hornets.

The 2022 California Pintos charge onto the field to play the Savannah Savages on Friday night, Aug. 26, 2022. (Democrat Photo/Evan Holmes) 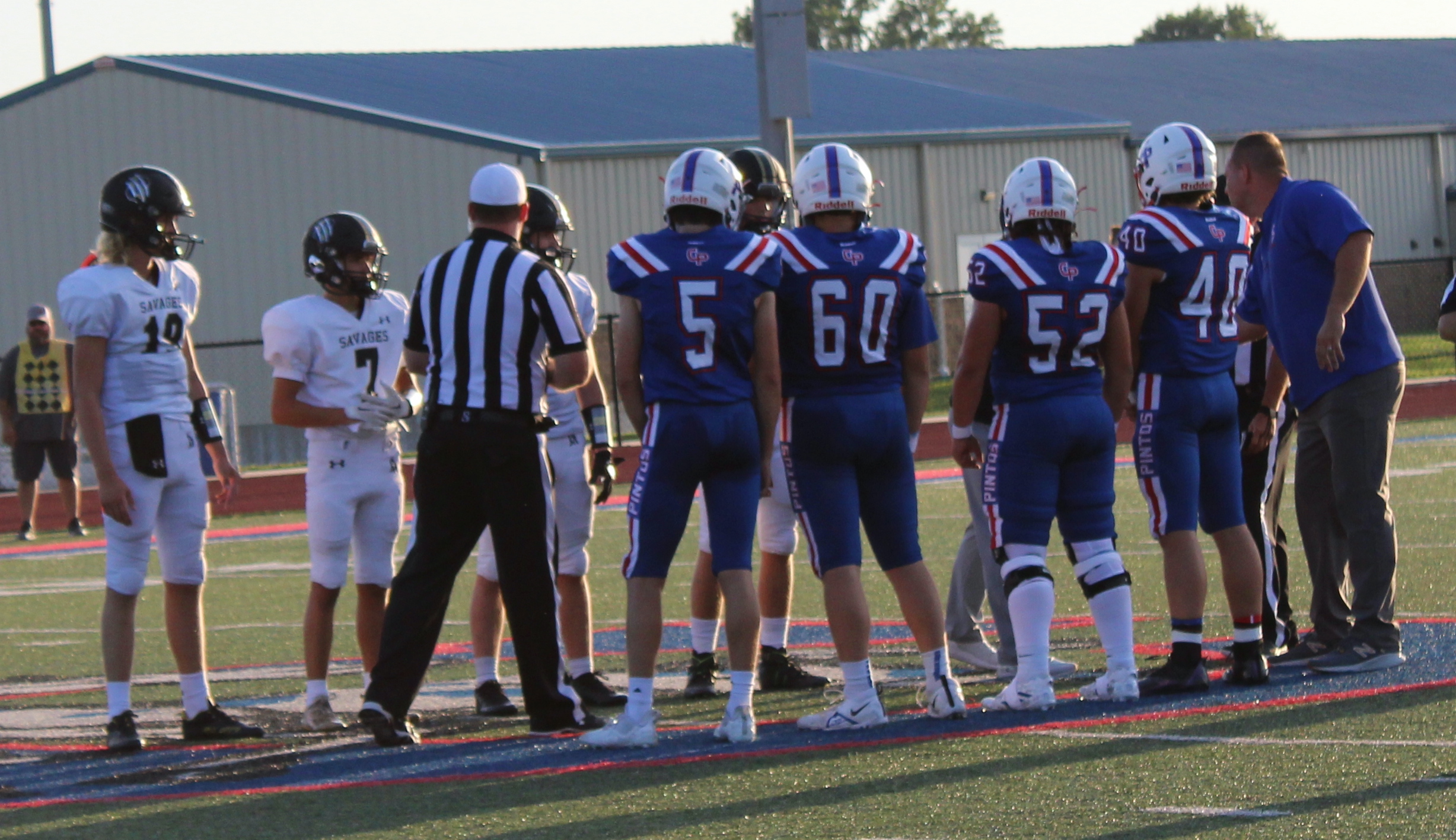 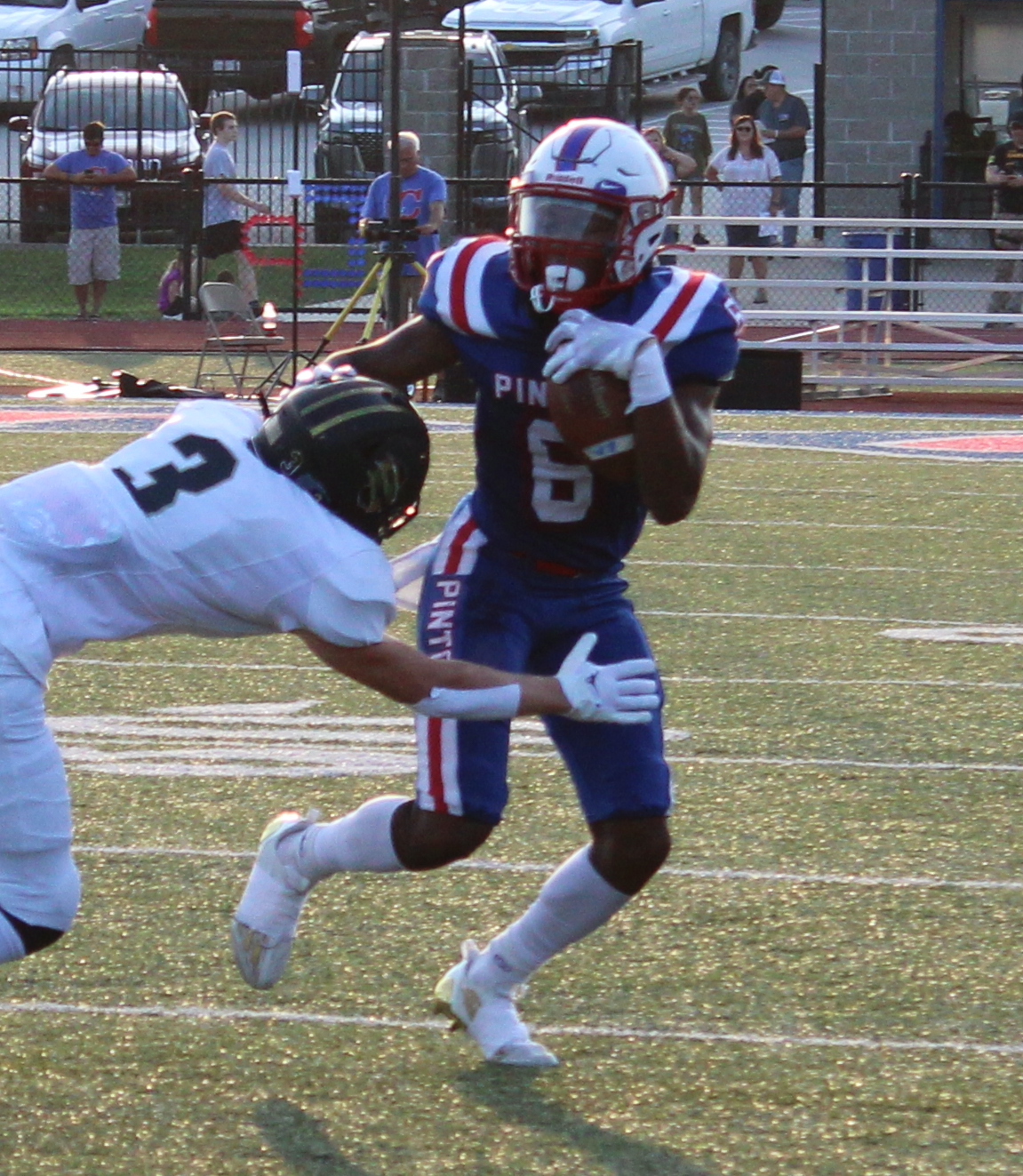 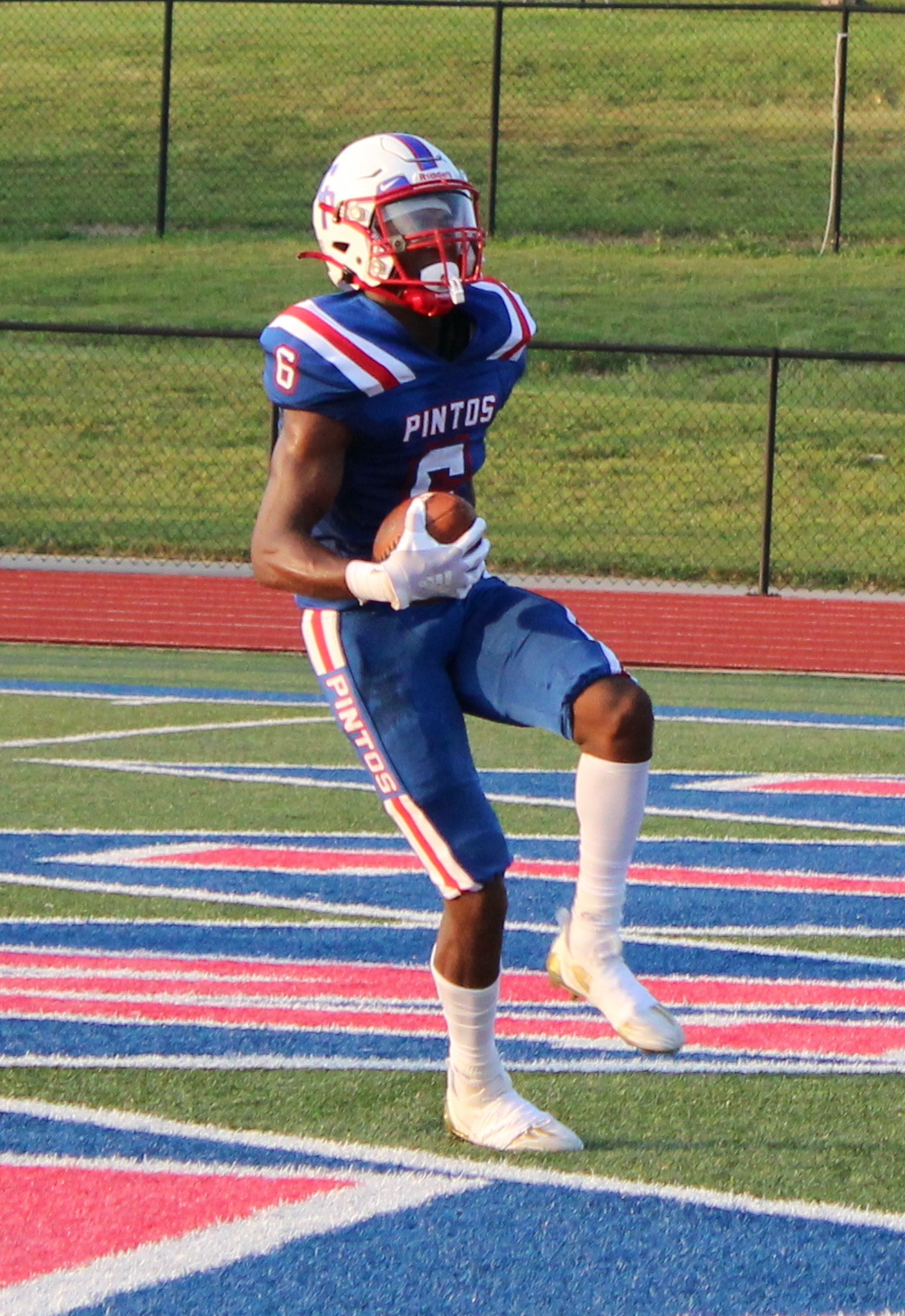 Junior Ayden Bryant high-steps into the end zone for the Pintos first touchdown of the season. (Democrat Photo/Evan Holmes) 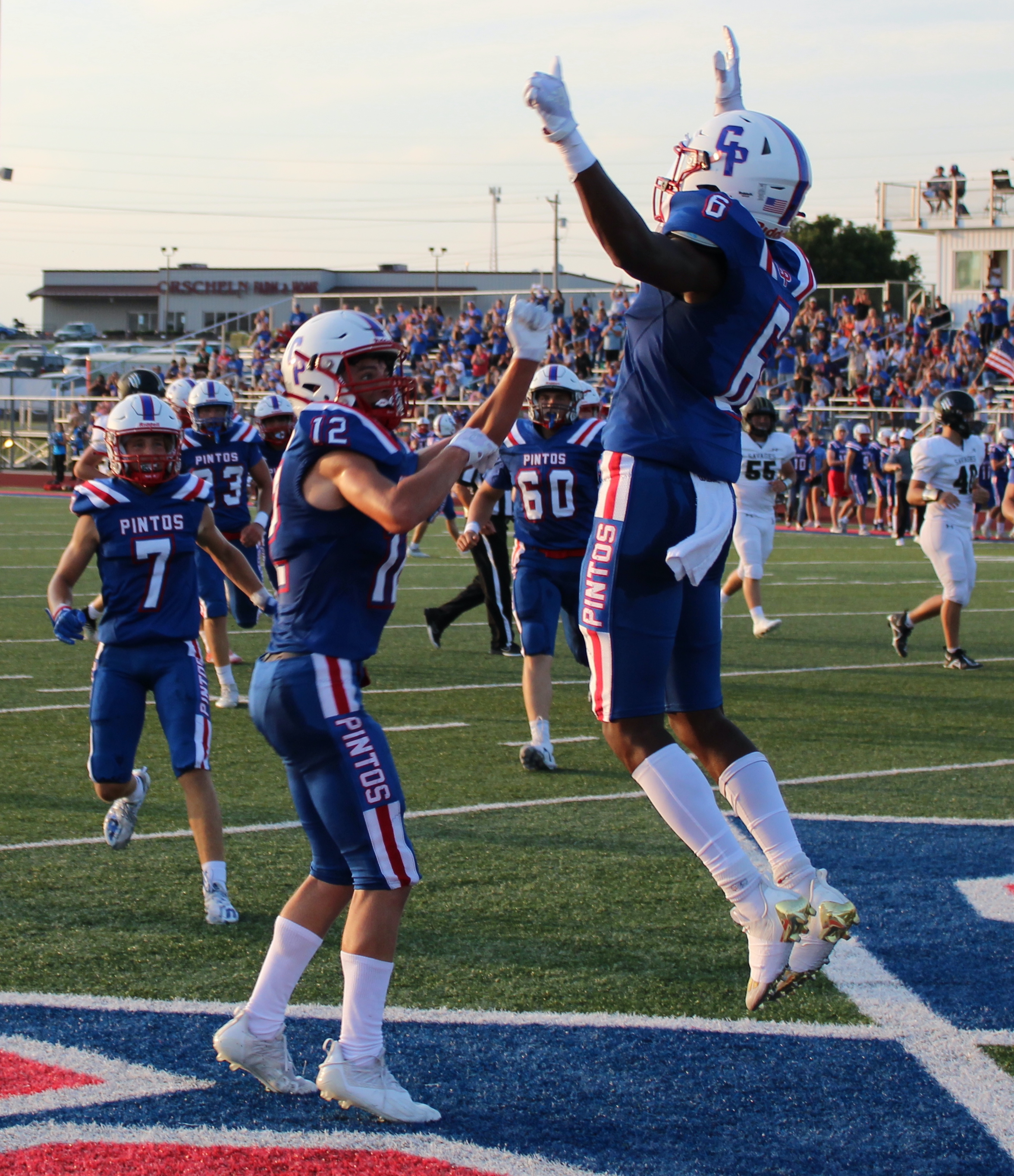 Junior Ayden Bryant (right) leaps into the arms of his teammate after scoring a touchdown on a 15-yeard pass from Martin Kilmer. (Democrat Photo/Evan Holmes) 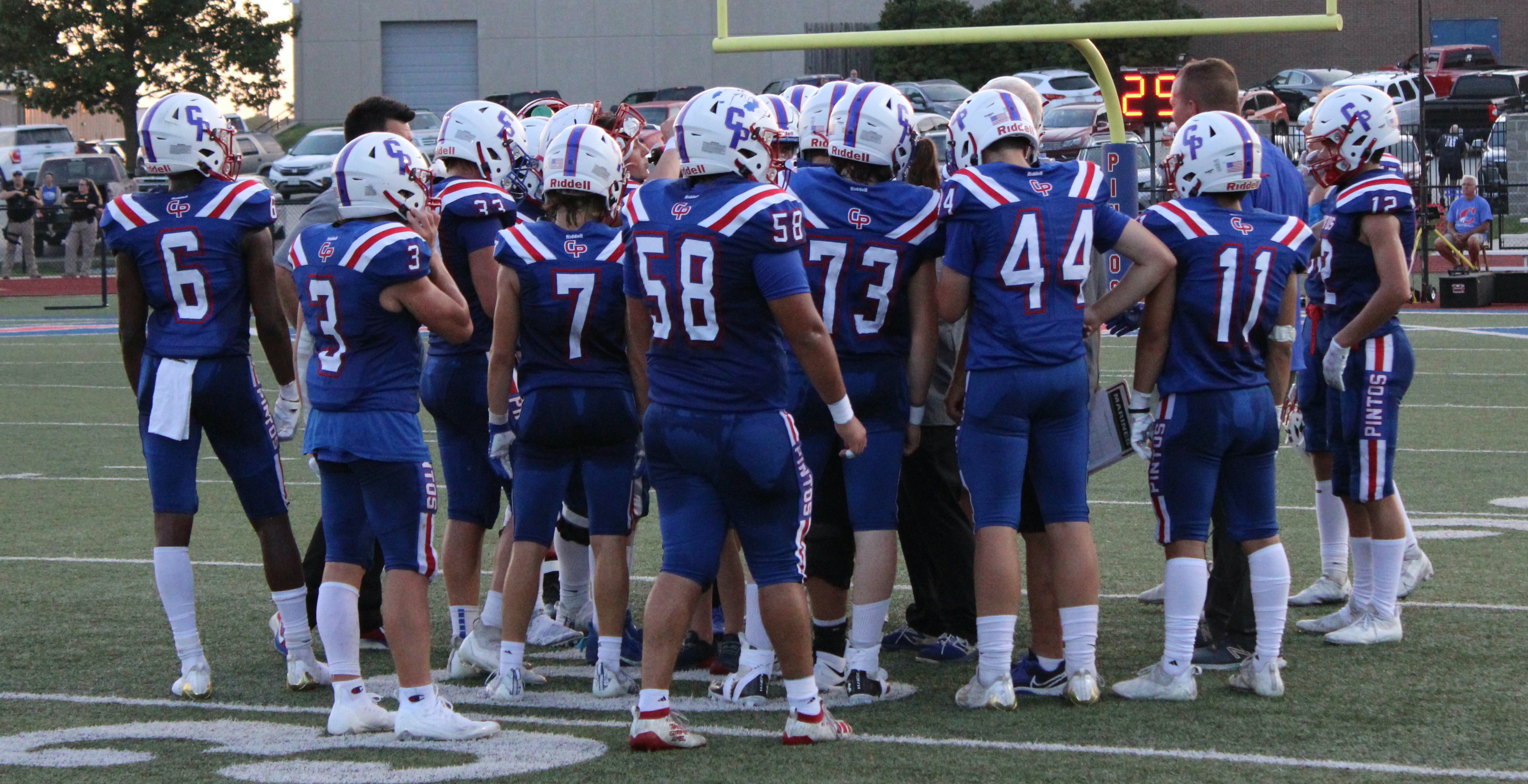 The Pintos get together for a team huddle at the end of the first quarter. (Democrat Photo/Evan Holmes) 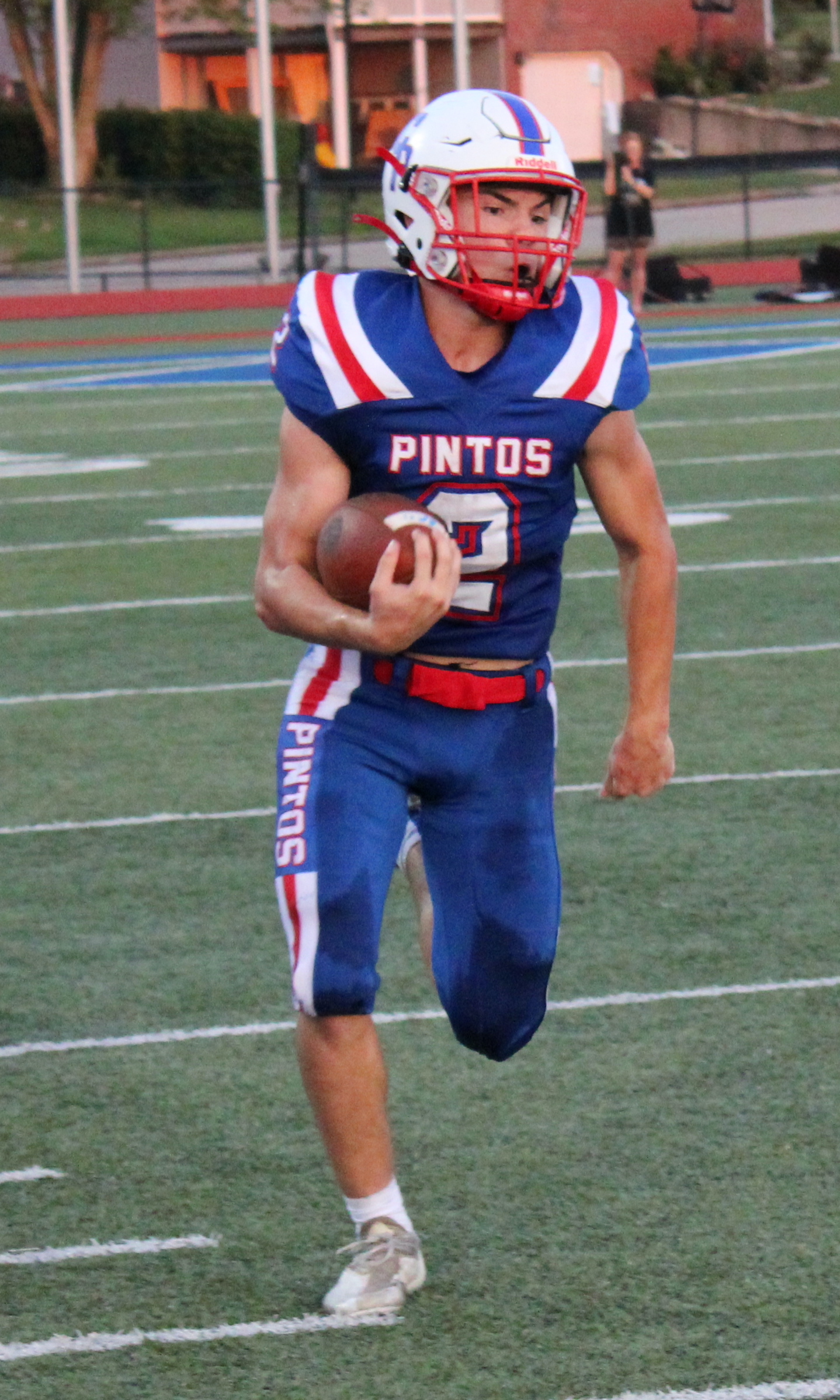 Sophomore running back Brooks Volkart takes it to the house on a 71-yard touchdown run on fourth and one to tie the game 14-14. (Democrat Photo/Evan Holmes) 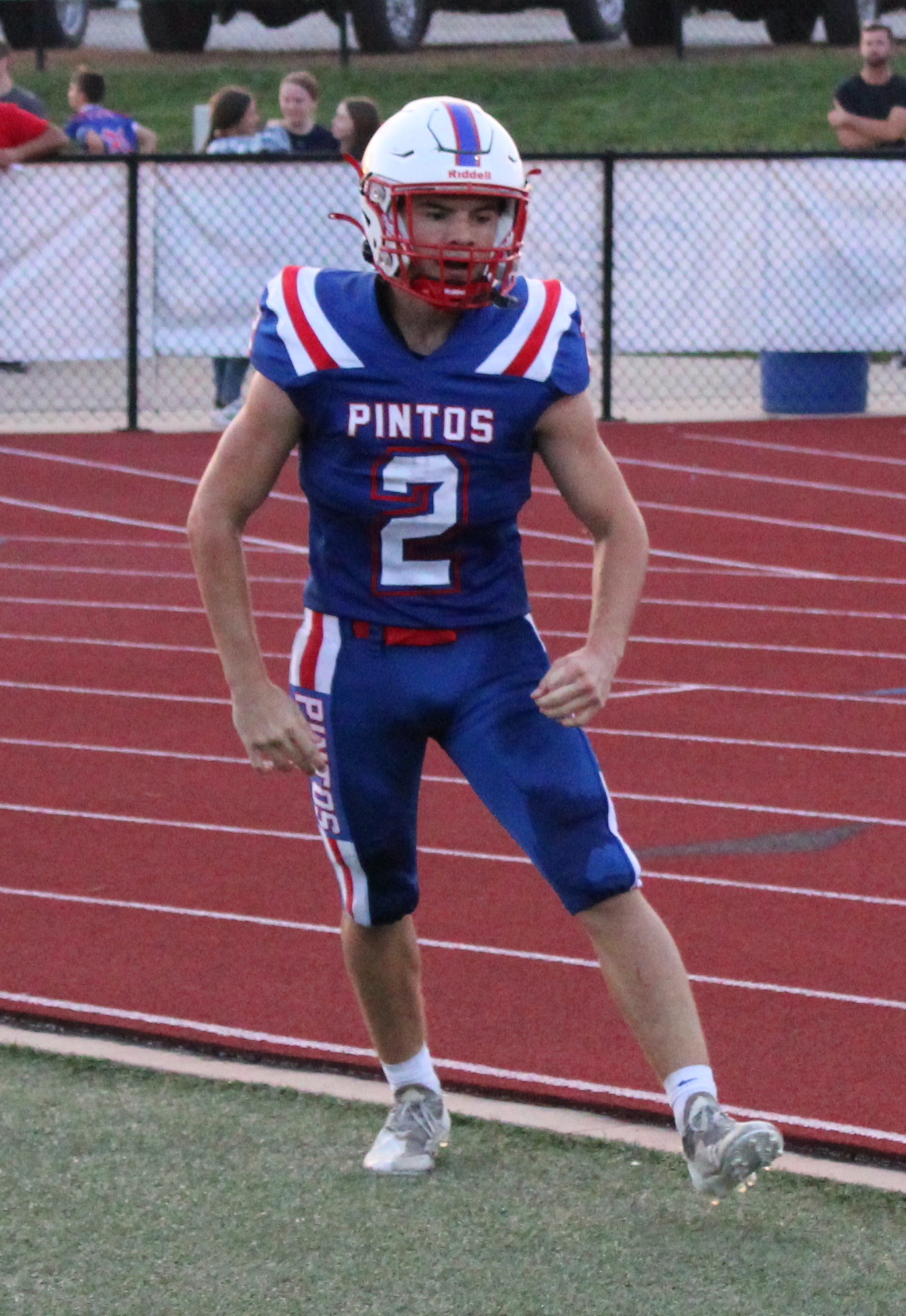 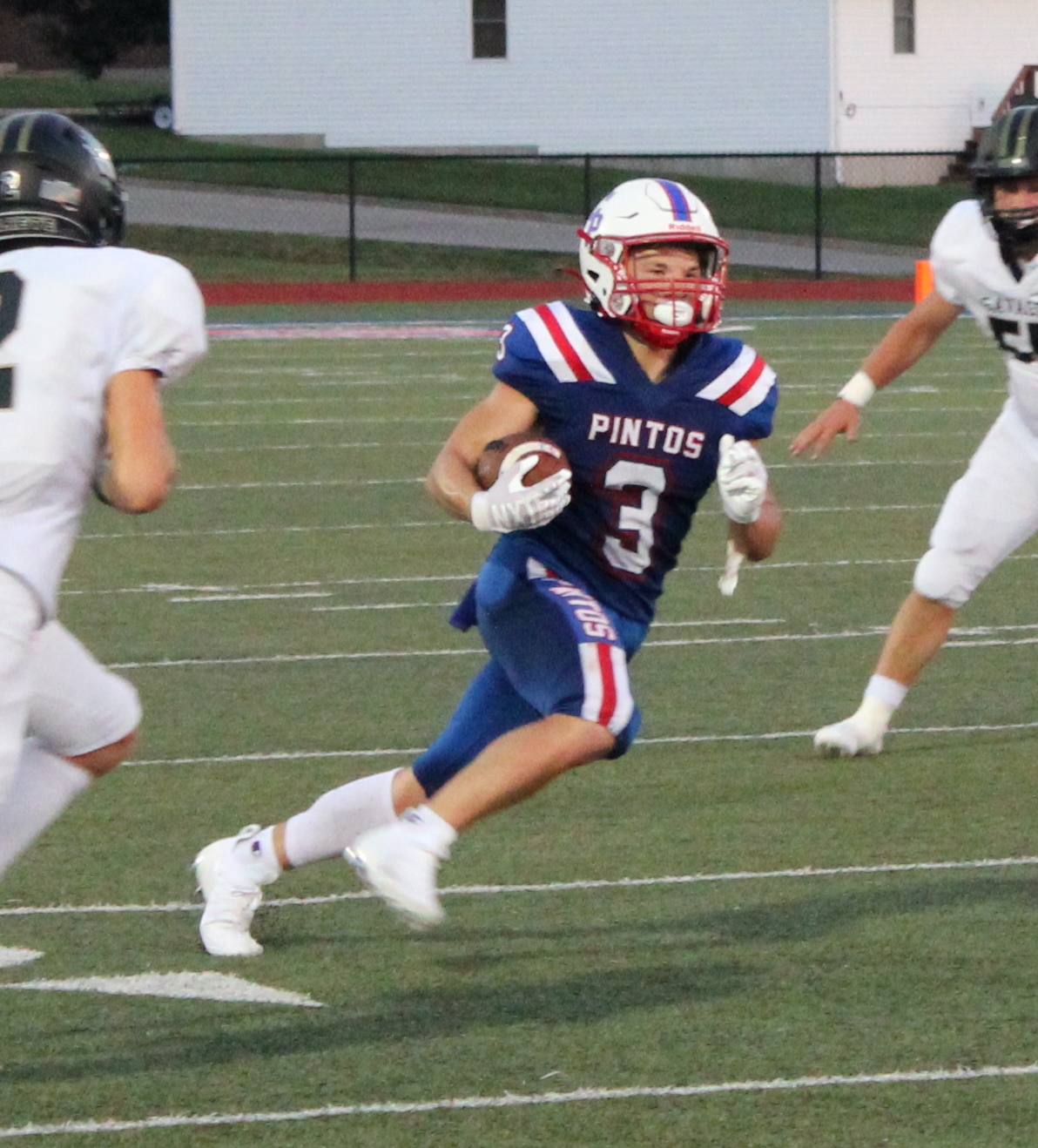 Sophomore running back Tyler Oden picks up a first down for the Pintos in the second quarter. (Democrat Photo/Evan Holmes) 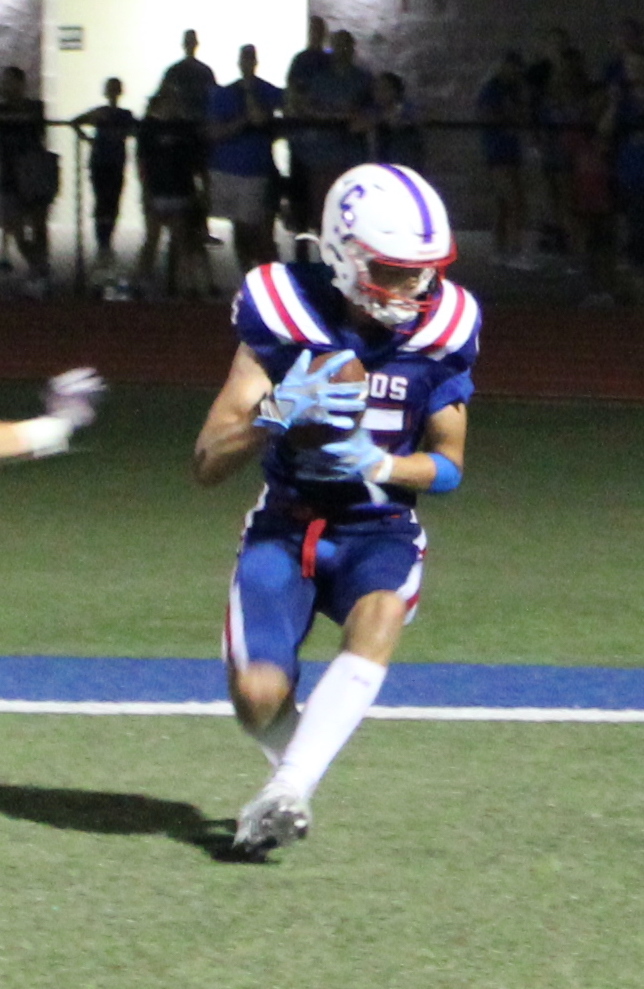 Junior Walker Friedmeyer gives the Pintos a 28-27 lead in the third quarter with a 30-yard touchdown reception. (Democrat Photo/Evan Holmes) 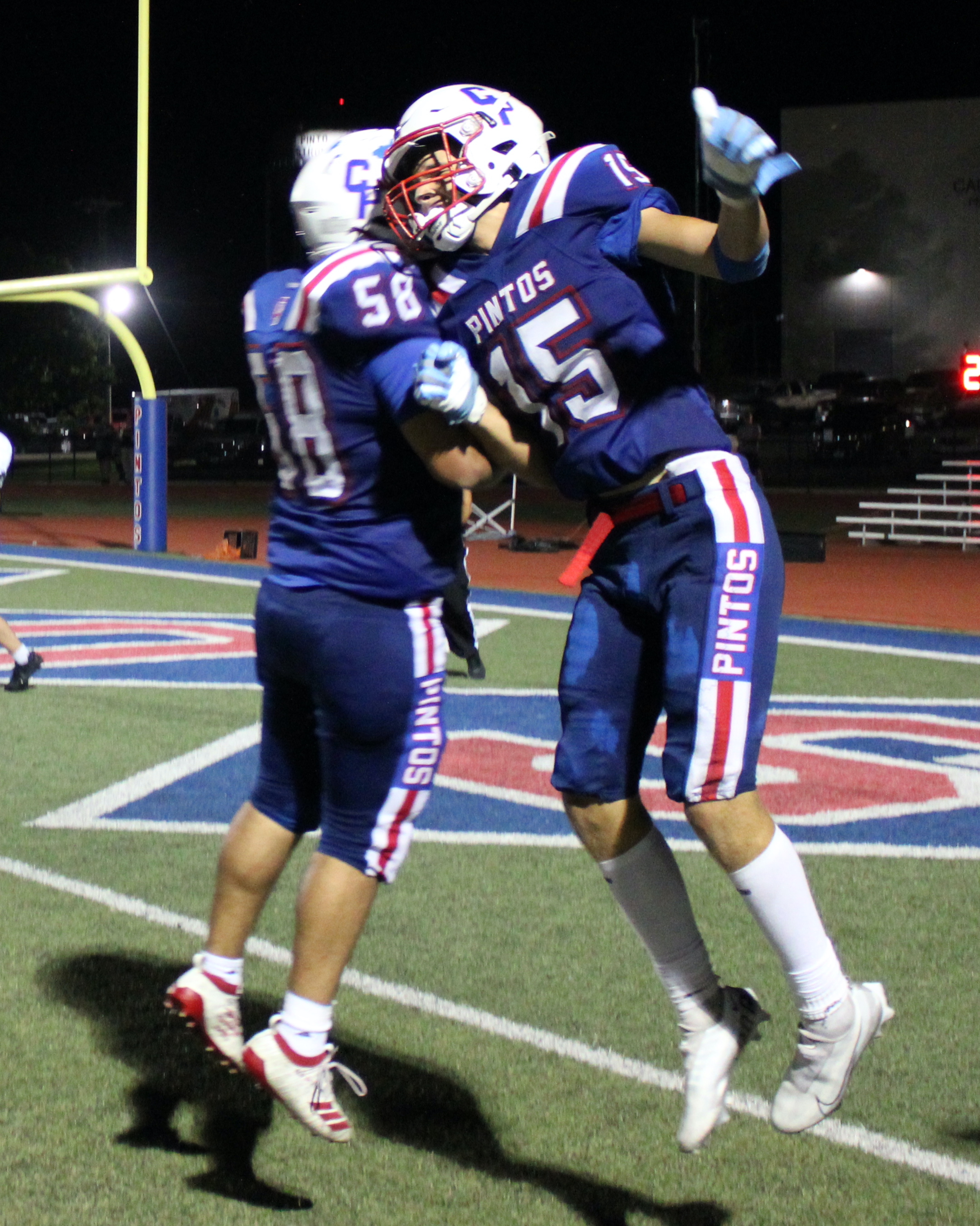 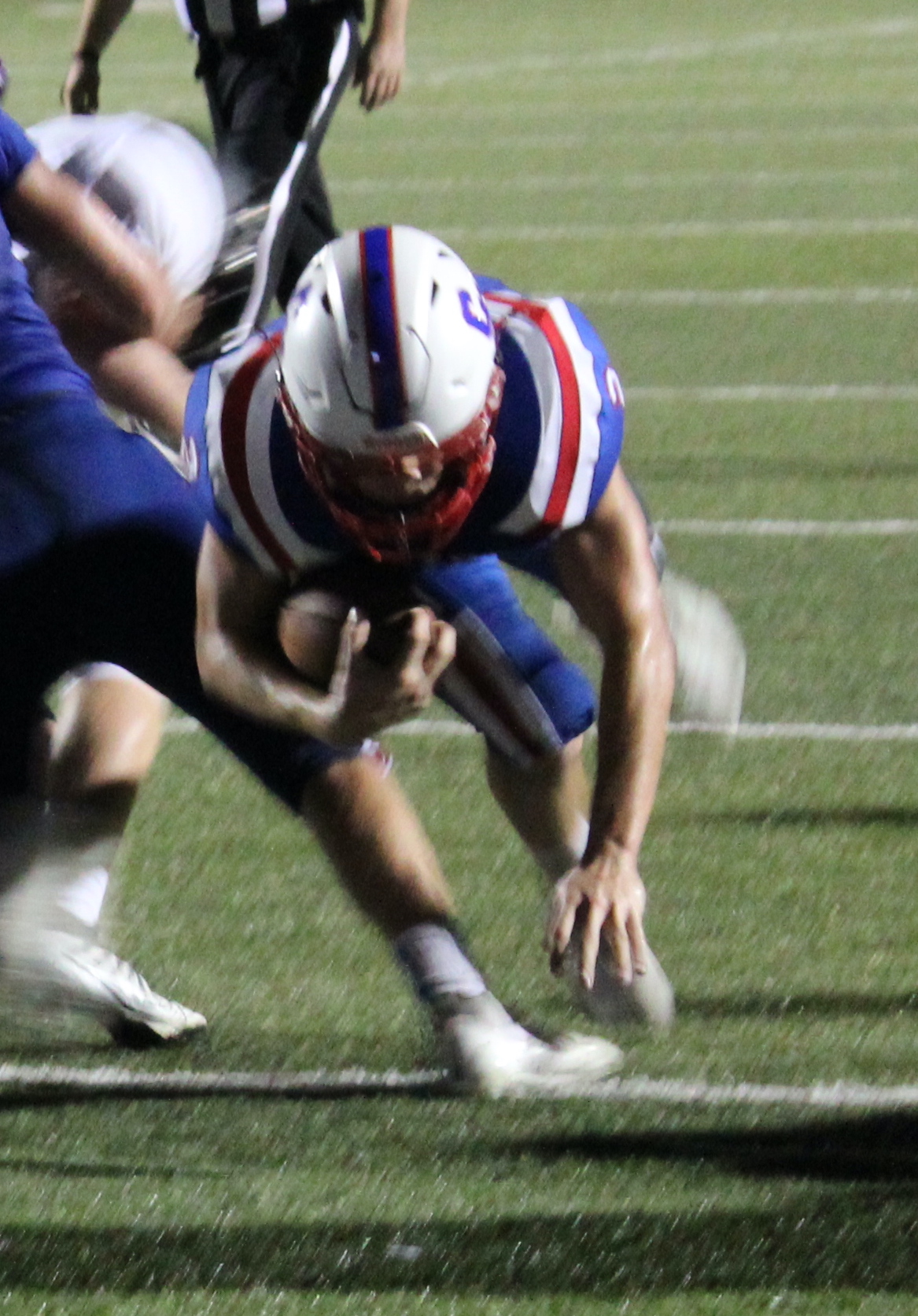 Sophomore Brooks Volkart breaks the plain for his second touchdown of the game and ties the game 34-34 with 8:45 to go in the game. (Democrat Photo/Evan Holmes)