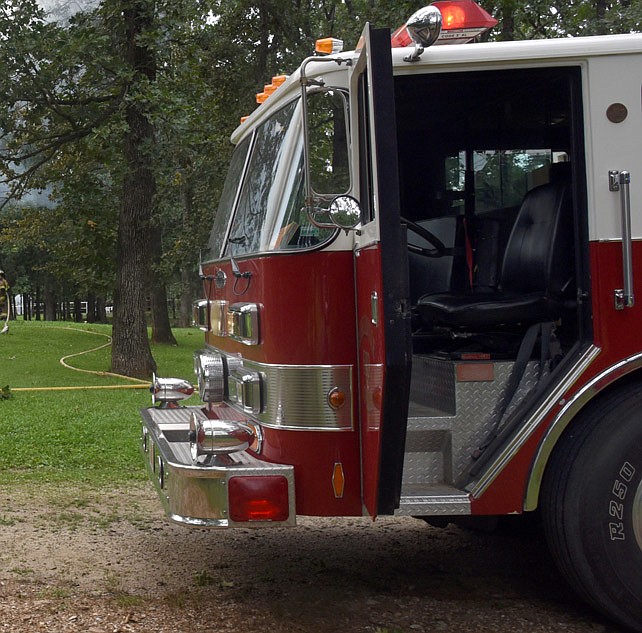 In this July 14, 2016 file photo, a fire truck from the Russellville-Lohman Fire Protection District sits outside a Russellville residence as firefighters extinguish a blaze.

Sarah Estep was about halfway through her News Tribune delivery route on Christmas Eve when she noticed smoke in the distance.

It was strange, she recalled, but she didn't think much more of it until she got closer.

Estep was among the first on the scene of a fire that broke out around 3 a.m. Saturday morning at a senior-living apartment building on Jefferson Street in Russellville. The flames destroyed four apartment units and destroyed the building, according to Mitchell Ott, chief of the Russellville-Lohman Fire Protection District.

The fire didn't result in any fatalities, except for a cat and a dog.

"It's a possibility if she hadn't arrived when she did that this could have resulted in some losses," Ott said of Estep. "She very easily could have saved some lives right there."

For some reason, Estep said, she took a different way through her delivery route than normal. It put her at the scene of the fire about 15 minutes earlier than she normally would have been there, she said.

"I had actually said out loud to myself after making the turn to go the other way, 'I regret making this decision,' and then I get to the fire and the universe told me I wasn't allowed to regret it," she said.

Estep, who has been delivering newspapers overnight since August, called emergency responders to report the fire before jumping into the scene to knock on doors and alert residents of the blaze.

She got one woman out of the building but didn't hear from anyone else potentially stuck inside.

"I was just freaking out, hoping that everybody was out of the apartment," Estep said.

The Cole County Sheriff's Office was on scene shortly after to take charge of the evacuation process.

Wanting to get out of their way, Estep went back to her route delivering newspapers.

Ott said the structure's roof was gone by the time his crews arrived. Emergency responders took an account of the building's three residents, he said, finding one had been evacuated by officers.

Estep said she didn't know what resulted from the fire until several hours after she had left.

"I'm just glad that she answered her door and believed me," Estep said.