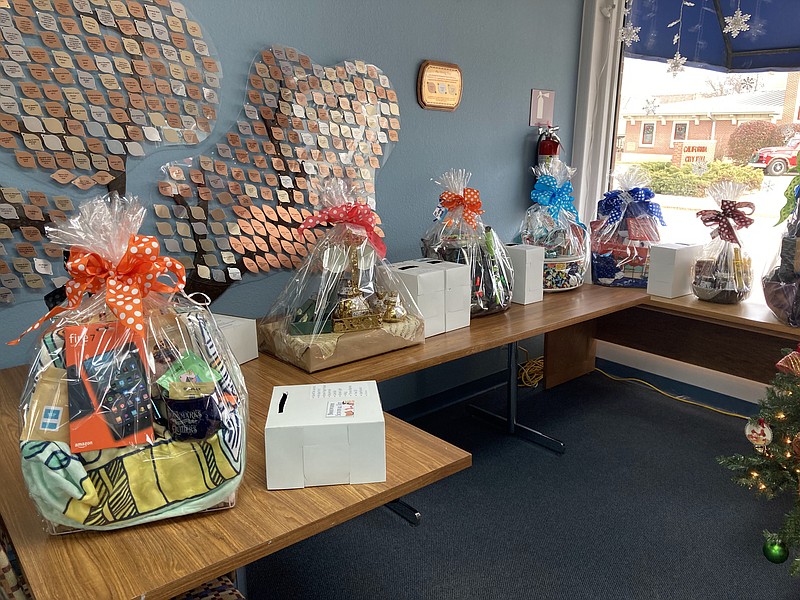 Democrat photo/Garrett Fuller — Gift baskets for the Winter Check Out Challenge are displayed Wednesday (Dec. 21, 2022,) at the Moniteau County Library at Wood Place. Participants in the adult reading program will be able to enter their names into a drawing to win a basket each time they check out eligible materials, with a limit of one entry per day. The program will run Jan. 2-Feb. 28, with the drawing scheduled for March 1.

The Moniteau County Library, despite having limited funds available, is determined to relocate in the next couple of years.

Saving money for a new library was the main focus of the library's board of trustees meeting this month. The board convened Dec. 21 to finalize the budget.

The meeting began with a financial report from Erin Ogg, circulation manager and bookkeeper, and a director's report from Connie Beauchamp.

Ogg discussed the last round of payments for "once-a-year" bills, such as the property tax for the neighboring building owned by the library, magazine and newspaper renewals, and others.

For income, Ogg said the library received a $1,000 donation, sold additional refurbished computers, and collected interest income and $4,000 in delinquent tax revenue, along with the final state aid payment. She said the library is still $4,000 short of the anticipated tax revenue.

Ogg said the board will need to amend the 2022 budget to include the bank service charge, structural evaluation, laminator and library materials at its January meeting.

After completing the financial report, the board turned its attention to the 2023 budget, which had to be adopted at the meeting.

The library's fidelity bond, a form of insurance, was changed in the budget to reflect a $165 increase. The library materials budget was also increased for the 2023 budget, after several issues arose during 2022.

"And like I said, we have gone over in our library materials (budget) this year, but we've just had a lot more (library) cards come in and a lot more people request different things, so we've kind of increased that by $4,000," Ogg said.

In materials, the library will save $999 for its TumbleBook subscription, which it canceled in October due to a lack of interest from the community. Despite an $81 per month increase in their email hosting, Ogg said the library will also save $385 on its technology budget after moving to a cloud-based storage option as opposed to paying a backup fee.

Before moving to reconvene in closed session to discuss real estate and personnel matters of the budget, board member Paul Bloch reminded the board to be good stewards of its money, especially as they plan to move.

"I think we need to take quite a look at how we're spending our money if we're going to consider building a building in the next two or three years," Bloch said. "We don't have a lot of free money."

Ogg said the library had a "considerable" amount of carry-over in its budgets for the past few consecutive years. She said carry-over funds are unallocated.

"I think the one source of income that we can count on is our tax revenue from the county. ... If you look at tax income, we're anticipating an increase of $14,000 for next year," Bloch said. "And, if I'm a banker or a financier, that's not a lot of free money if you're wanting to go to someone to borrow how much ever we're going to borrow, on top of our contributions and our donations. ... That's how I'm prefacing my look at this budget for next year, and future years. Where's that money going to come from if we do decide to proceed with a new building?"

Beauchamp said the board adopted an edited budget following the closed session. She said the board was able to recover $38,000 from budgets the library "haven't historically ever spent."

• Beauchamp said 13 gift baskets have been prepared and placed on display for the upcoming Winter Check Out Challenge. Participants in the adult reading program can have their name entered into a drawing to win one of the baskets each time they check out eligible materials throughout the program, with a limit of one entry per day. The program will run Jan. 2-Feb. 28, with the drawing scheduled for March 1.

• In her report, Beauchamp said 54 attended Story Time events in November. She said 112 participated in the Disguise-a-Turkey program. For circulation and inventory, she said 12 new library cards were issued in November. There have been 212 new cardholders signed up since January, bringing circulation to 5,545 patrons at the end of November.

• Beauchamp said no other responses have been received in regards to the exterior building repairs.

The trustees will meet next at 10 a.m. Jan. 18 on the second floor of the Moniteau County Library at Wood Place, 501 S. Oak St. 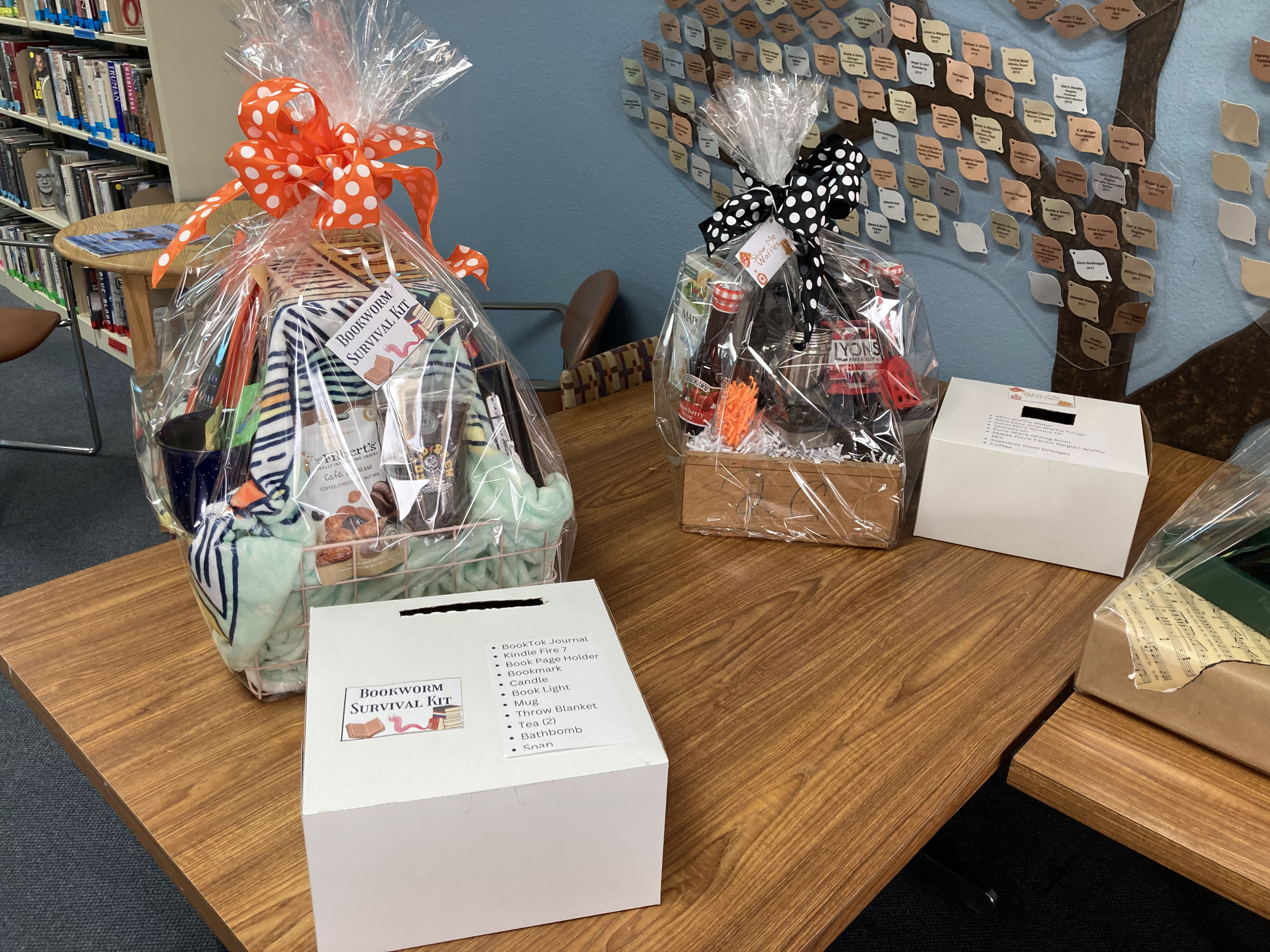 Democrat photo/Garrett Fuller — Two gift baskets for the Winter Check Out Challenge are displayed Wednesday (Dec. 21, 2022,) at the Moniteau County Library at Wood Place. Participants in the adult reading program will be able to enter their names into a drawing to win a basket each time they check out eligible materials, with a limit of one entry per day. The program will run Jan. 2-Feb. 28, with the drawing scheduled for March 1.