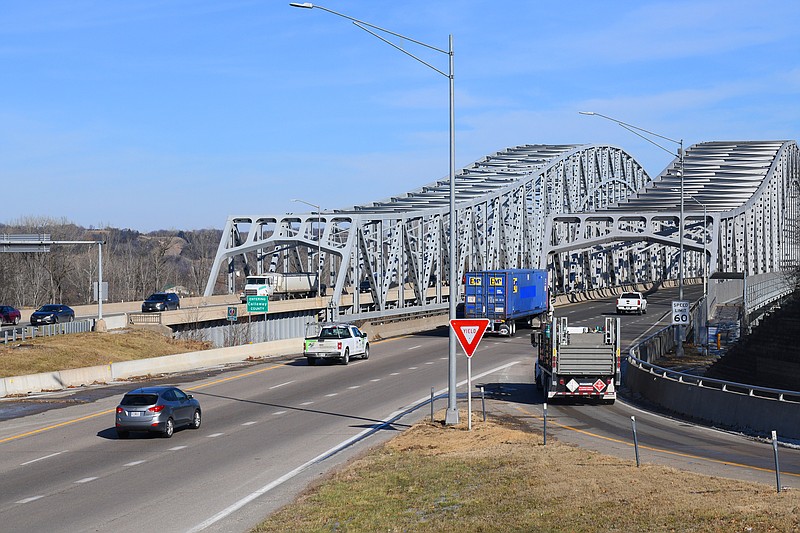 Eileen Wisniowicz/News Tribune photo: A photo of Highway 54 and the Roy Blunt Bridge in north Jefferson City. The Missouri Department of Transportation announced plans to expand the highway into six lanes of traffic.

The Missouri Department of Transportation is looking to minimize traffic congestion along Route 54 just north of Jefferson City.

It announced three proposals Wednesday, all of which would remove the existing westbound ramp from Route W (which becomes Airport Road) to Route 54. Two options provide for the construction of a new ramp and one does not.

The Jefferson City council is opposed to the plan that would eliminate the ramp permanently and sent a letter to MoDOT in November stating such. At least one member of the council will ask the state agency to go back to the drawing board at a Jan. 10 public meeting.

"We've got a lot of concerns," said Ron Fitzwater, chairman of the council's public works and planning committee. "It's just going to be a nightmare if they close that ramp."

Starting in 2024, MoDOT wants to widen the portion of Route 54 between the Missouri River bridge and U.S. 63/Route 94 clover interchange to six lanes -- three lanes in each direction. The eastbound side of the bridge (traveling out of the city) will get a fourth lane after restriping.

"Traffic volumes along this corridor continue to grow," MoDOT Central District Engineer Machelle Watkins said in a news release. "We have been working with the city and county, as well as local businesses that will be impacted, to identify potential enhancements and reconfigurations for these intersections. Our goal is to make the usage of this roadway as safe and reliable as possible for all travelers that come through the area."

Randy Aulbur, MoDOT's assistant Central District engineer, said the department identified the need to expand the number of lanes on Route 54 in the area a few years ago through its unfunded needs process. The project then moved to MoDOT's five-year Statewide Transportation Improvement Program last year.

"So we've been working on what does that actually look like if you add lanes in that section and, basically, how can that work," Aulbur said.

He said the eastbound work is more clear-cut because MoDOT is able to restripe the bridge into four lanes with the right-most lane exiting to Route W. Motorists would have a dedicated lane to exit onto Highway 63.

"If you're leaving Jeff heading to Columbia, you'll be able to hit that lane on the Jeff City side of the bridge, and you'll just stay in that lane all the way through till the cloverleaf."

The westbound work is where concerns are focused.

The first option would eliminate the westbound ramp from Route W to Route 54, significantly extending the travel path from Jefferson City Memorial Airport to the rest of the city.

The second proposal would remove the westbound ramp from Route W, but replace it with a new ramp using Fourth Street.

The final option would close the westbound ramp from Route W and add an entirely new ramp with a right-hand entrance before Fourth Street.

The City Council caught wind of the plans and passed a resolution Nov. 7 in opposition to what it called MoDOT's "preferred plan" to eliminate the ramp.

"We realize just how important having clear and efficient access to the Capital City is for our continued growth and maintaining economic impacts for several businesses," she said.

Tergin and Fitzwater, who sponsored the resolution, said they recognize the need to free up congestion along Route 54 but that it shouldn't come at the cost of losing the ramp.

Fitzwater said he hasn't heard any support for removing the ramp, except from MoDOT, but he has heard strong opposition from the airport, farmers and business owners in the area.

The ramp closure would heavily impact motorists trying to access the airport, Capitol Sand Company, MFA Agri Services, Katy Trail State Park, 63 Diamonds Sports Complex and other recreational or commercial offerings in the area, according to the resolution.

"There's universal opposition to it," Fitzwater said. "My feeling is we're going to have to figure out some way to go to plan B because what's currently on the table is not workable."

Aulbur said MoDOT is working through the design phase of the project to hammer out details. It's requesting public feedback on the proposals to "steer us to the direction that the majority of our constituents want to see it progress," he said.

Fitzwater said MoDOT's two other proposals also present concerns because traffic entering onto Route 54 from U.S. 63 and Route W would be merging into the same lane. He also noted one of the proposals proposes a ramp through a park area.

"I think their concern was they didn't want to have to do a slowdown of that traffic -- they were trying to keep a free flow but there's just no way to do it and eliminate that ramp," he said.

Fitzwater said MoDOT has claimed funding may be an issue with the project as well. The plan to eliminate the Route W ramp is the cheapest option, according to MoDOT estimates, as the proposals range from $4.5 million to nearly $5 million.

Tergin said she's open to considering alterations to the existing ramp but access needs to be maintained.

"We are trying to work with them to come up with solutions of what we would like to support, and what we support is that good access and improving the traffic conditions in and out of Jefferson City," Tergin said.

Fitzwater said he plans to attend the Jan. 10 meeting, which MoDOT is hosting from 4-5:30 p.m. at the John G. Christy Municipal Building, 320 E. McCarty St. He said Callaway County commissioners have also expressed plans to attend.

In addition to the meeting, MoDOT is collecting public feedback through Jan. 20 online at modot.org/JeffersonCity54.

MoDOT is expecting to award the project contract in December 2023 and begin work in the spring of 2024. 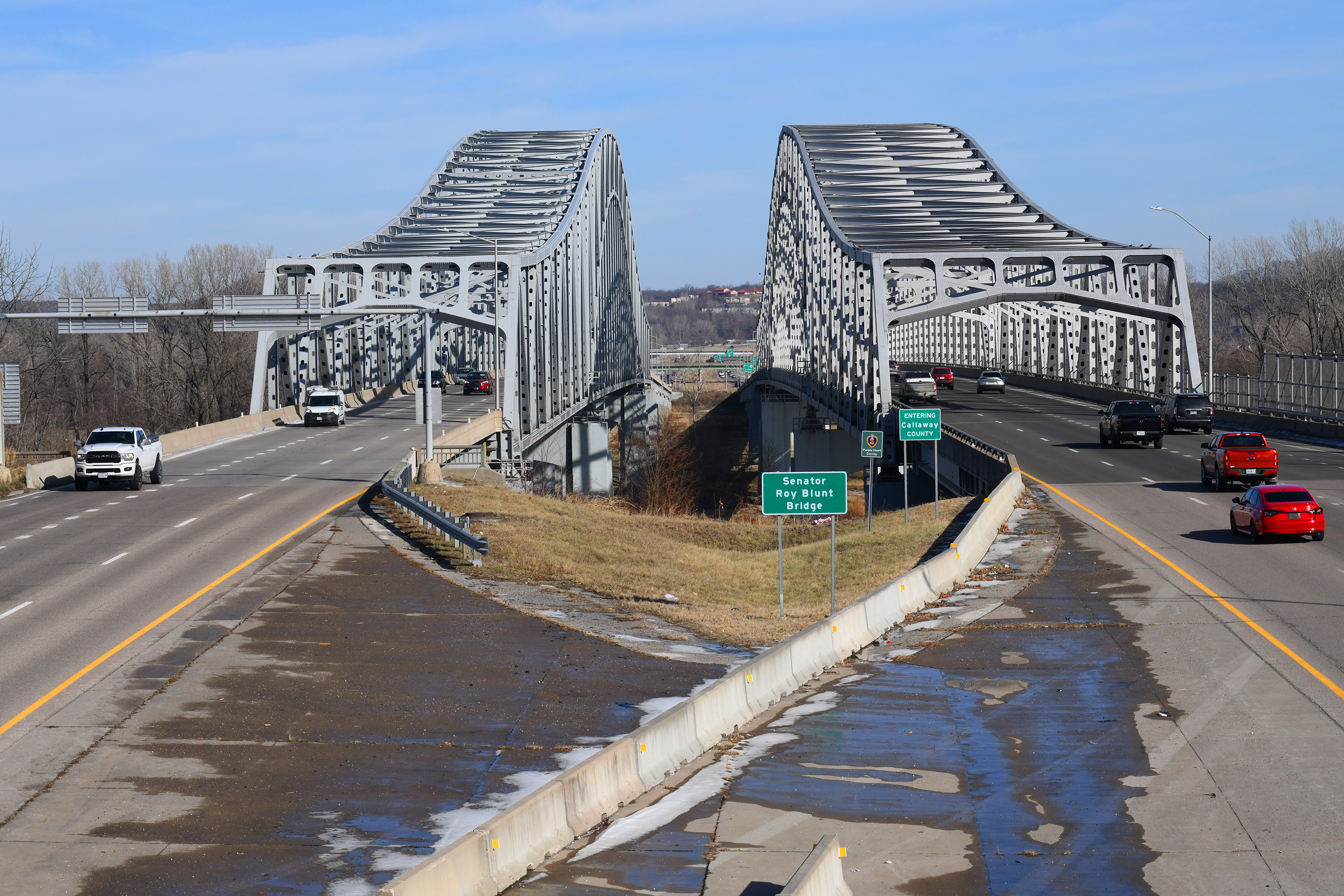 Eileen Wisniowicz/News Tribune photo: A photo of the Roy Blunt Bridge in north Jefferson City. The Missouri Department of Transportation announced plans to expand Highway 54 into six lanes of traffic from the bridge over the Missouri River to the Highway 63/94 interchange.