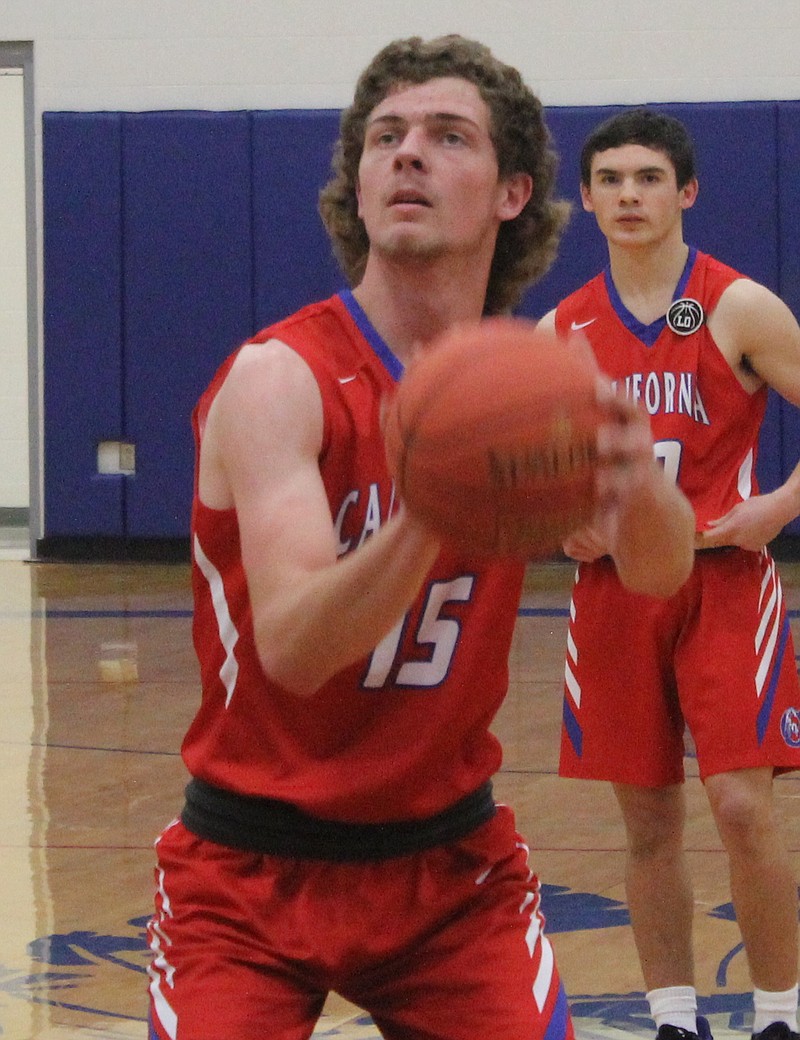 Pintos senior forward Jaden Traschel completes an early three-point play to give the Pintos a 10-5 lead in the first quarter. Traschel had 12 points and six rebounds on Tuesday night.

On Tuesday night, the California Pintos and Russellville Indians went head-to-head in Russellville and Pintos forward Trevor Myers celebrated a milestone by scoring his 1,000th career point in the first quarter.

Russellville came back from an early nine-point deficit to turn the game into a back-and-forth affair. But, in the end, it would be free-throw shooting that would be the biggest difference. California made 30 free throws in the game and took home a 68-59 win.

In its history in boys basketball, California was a perfect 8-0 against Russellville since their first game in 2007. The two schools had developed a small rivalry and some of the players on both teams have played with or against each other in the offseason multiple times. Now, the young men were set to play each other again -- this time for a win for their respective schools.

California's Trevor Myers had been anticipating this game for weeks because he was only three points away from the Pintos' 1,000-point club. It was a goal he had dreamed of achieving for years.

The game began at a slow- scoring pace. Both teams went scoreless for the first two minutes until California broke that mold. Then, with 5:05 remaining in the first quarter, Myers reached the 1,000-point milestone when he hit a three-pointer from the left side and earned a standing ovation from the Russellville crowd.

California head coach Brad Conway then took an early timeout to give Myers the recognition he deserved, and Myers was presented his commemorative 1,000-point basketball during the timeout.

Myers' record-breaking 3- pointer would be the start of a 14-2 run for the Pintos, which included a 3-point play from senior forward Jaden Traschel. A save and pass for a breakaway layup from Trevor Myers to freshman guard Brooks Volkart followed, as well as a breakaway dunk for Myers. California pulled away to 16-5 lead and appeared to be in control.

Russellville chipped away at the Pintos' lead by knocking down three 3-pointers and another basket, and cut California's lead to 17-13 when the first quarter ended.

The Pintos' big men struggled to take away space on the floor. While the Pintos struggled as a team in taking away the 3-point shot, Russellville hit six three-pointers in the first half. Charlie Miller led the way for the Indians with nine points in the quarter and went 4-of-5 from the foul line. With their second quarter rally, the Indians had drawn to an even 36 with the Pintos at the half.

Pintos head coach Brad Conway knew Russellville was pushing his team and that changes needed to be made in the locker room. The biggest change the Pintos would make would be slowing down the pace to give their team defense a jolt. The strategy would pay off as the Indians slowed down the offense and it caused them to have problems putting the ball in the hole. But California would have their own problems with the stubborn defense of Russellville.

The game went into the fourth quarter with California up by five. With both teams now in foul trouble, the game would come down to whoever would get the most stops.

California once again looked to their main scorers, Calen Kruger and Trevor Myers, to put them over the top. They would do so by getting to the free-throw line. Kruger and Myers shot 11-of-14 combined from the foul line in the fourth quarter alone. The free throws got California the crucial points they needed with their offense stuck in neutral. Two Russellville players would foul out in the fourth quarter. Then, California junior forward Hunter Berendzen, who had struggled all night, converted a layup off a missed free throw and put the Pintos at arms-length for good. California defeated Russellville 68-59 and extended their winning streak to seven games.

For Russellville, Jake Schulte and Charlie Miller had 14 points a piece to lead the Indians. Schulte went 5-of-8 from the three-point line.

After the game, Myers said he had been imagining the day where he would join California's 1,000-point club since he was a child.

"Ever since I was a freshman, I've been dreaming of it," Myers said. "I kind of hold myself to high standards. So I try to force myself to prove that out there."

Pintos head coach Brad Conway acknowledged just how wonderful of a moment it was for Myers to get his 1,000th career point. But he also acknowledged his team barely won by the skin of their teeth with their defensive struggles. He said he hopes his team will improve its defense as they host the California tournament this week.

"I told the kids that we did enough to win," Conway said. "We got enough defensive stops to win. We knocked down some free throws there late in the game. That allowed us to get a little breathing room. We know we can play better, and we're going to have to for Friday night's game, our second conference game. We're on the road again against Hallsville, and they're similar to Russellville."

On Friday night, California brought their winning streak to eight games by defeating the Hallsville Indians 69-54. With the Pintos scoring 46 points in the second half, California's record now sits at 12-1.

The Pintos will now take part in their annual California tournament. Their first round opponent will be the 6-4 St. Elizabeth Hornets. Tip-off is at 8:30 p.m.

The Russellville Indians recovered from their loss to California and defeated Centralia on Friday 60-55. Their record is now 5-8. They played Eugene on Monday, losing 63-45. They were to play Jamestown at home on Tuesday. 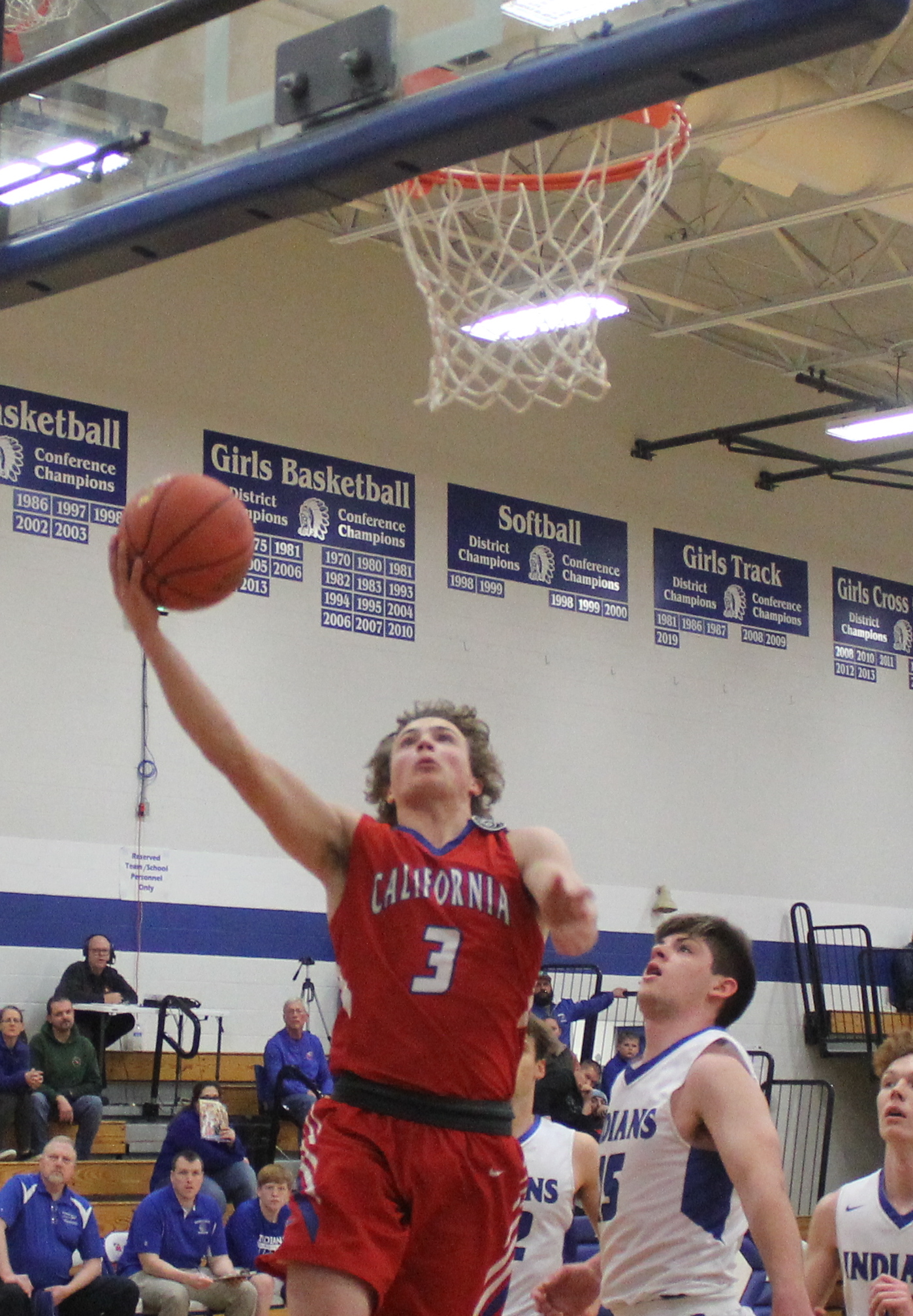 California senior guard Calen Kruger soars to the rim and lays it in on the fast break in the first quarter. Kruger finished with a game-high 25 points. Including 12 of 14 from the free-throw line. 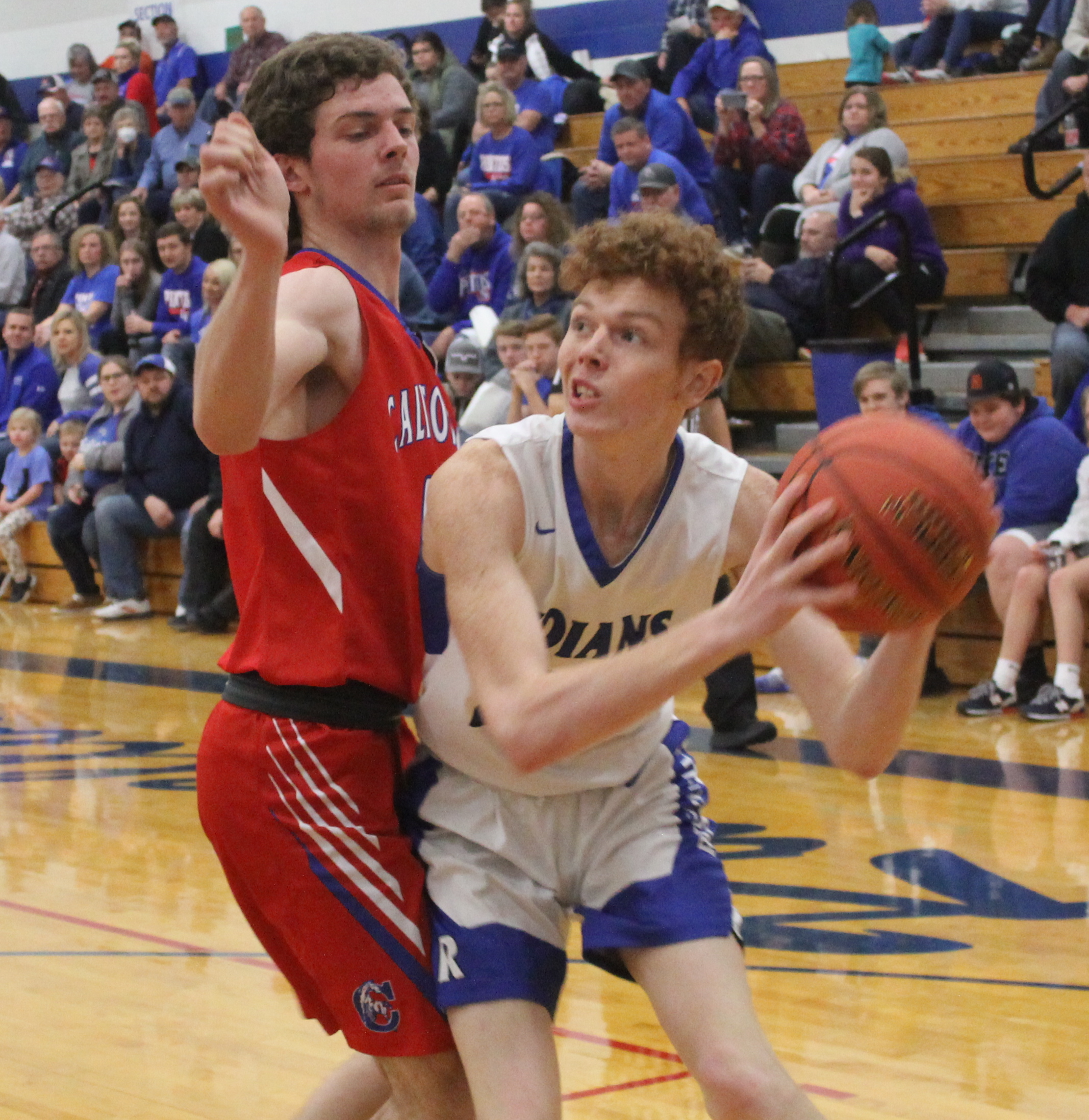 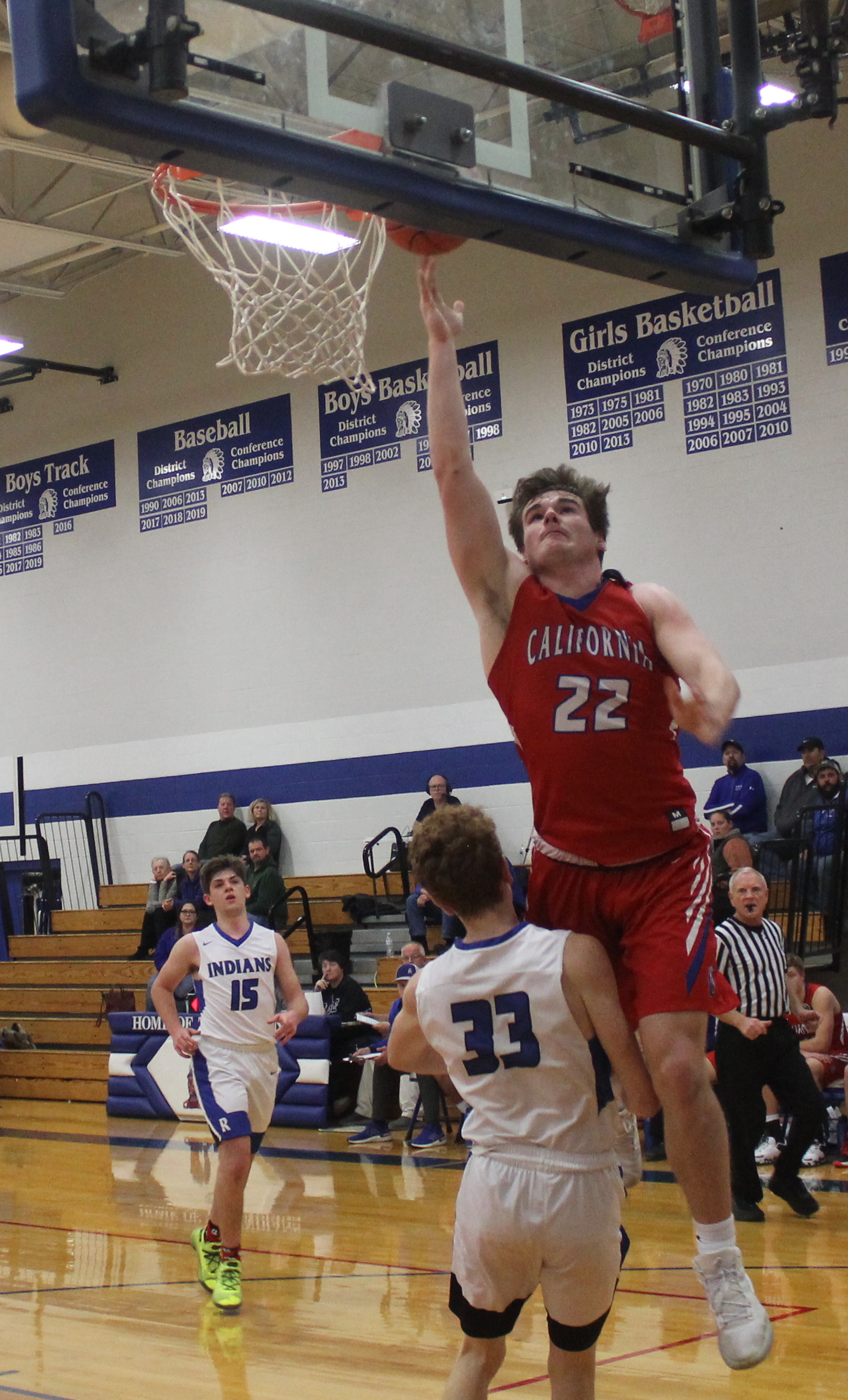 California senior Trevor Myers flies to the rim for a fast break layup in the fourth quarter. Myers scored his 1000th career point with 5:05 left in the first quarter and finished with 20 points. 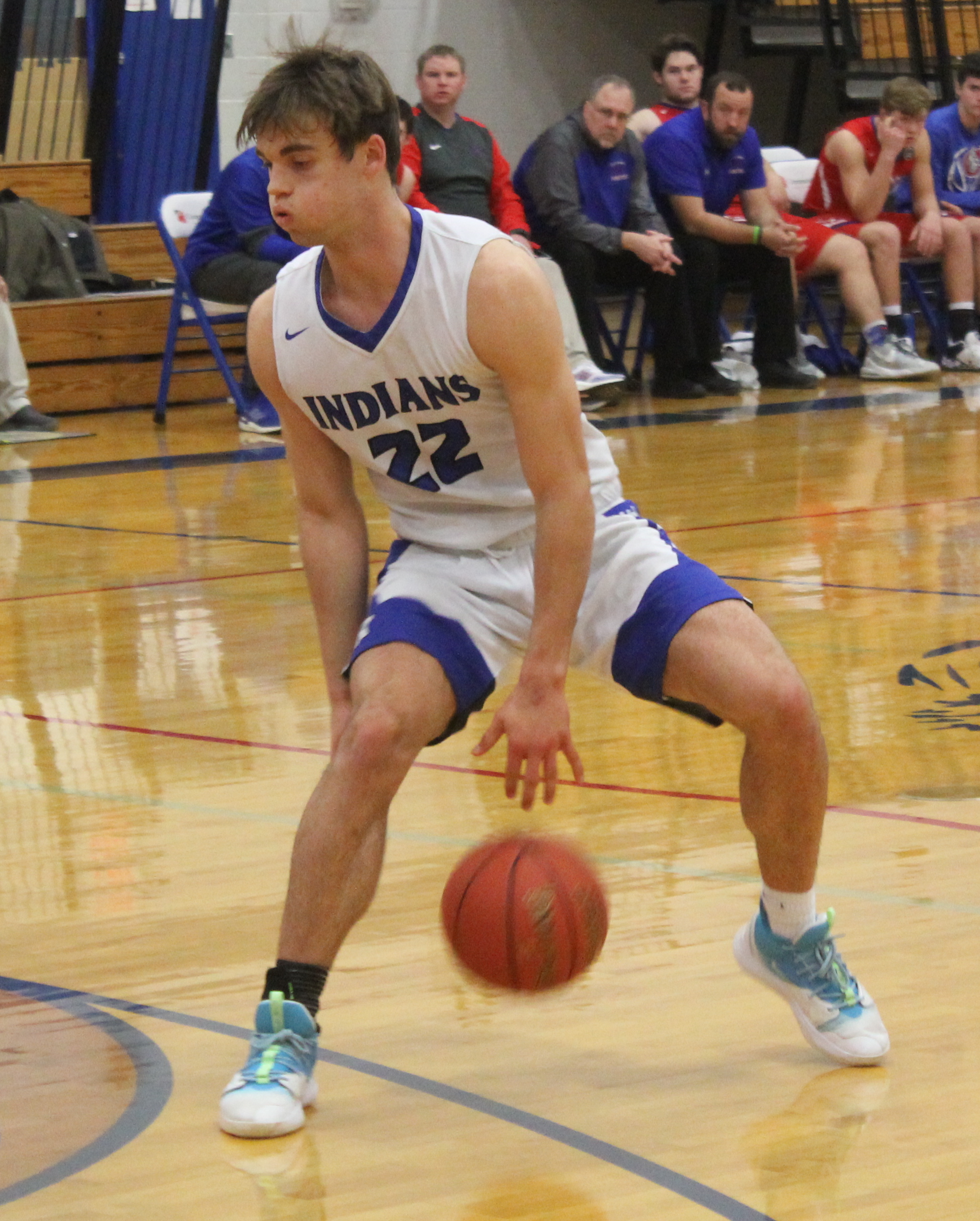 Russellville senior guard Charlie Miller dribbles through his legs to create air space for himself and a passing lane for his teammates. Miller tied for the team-high 14 points with teammate Jake Schulte. 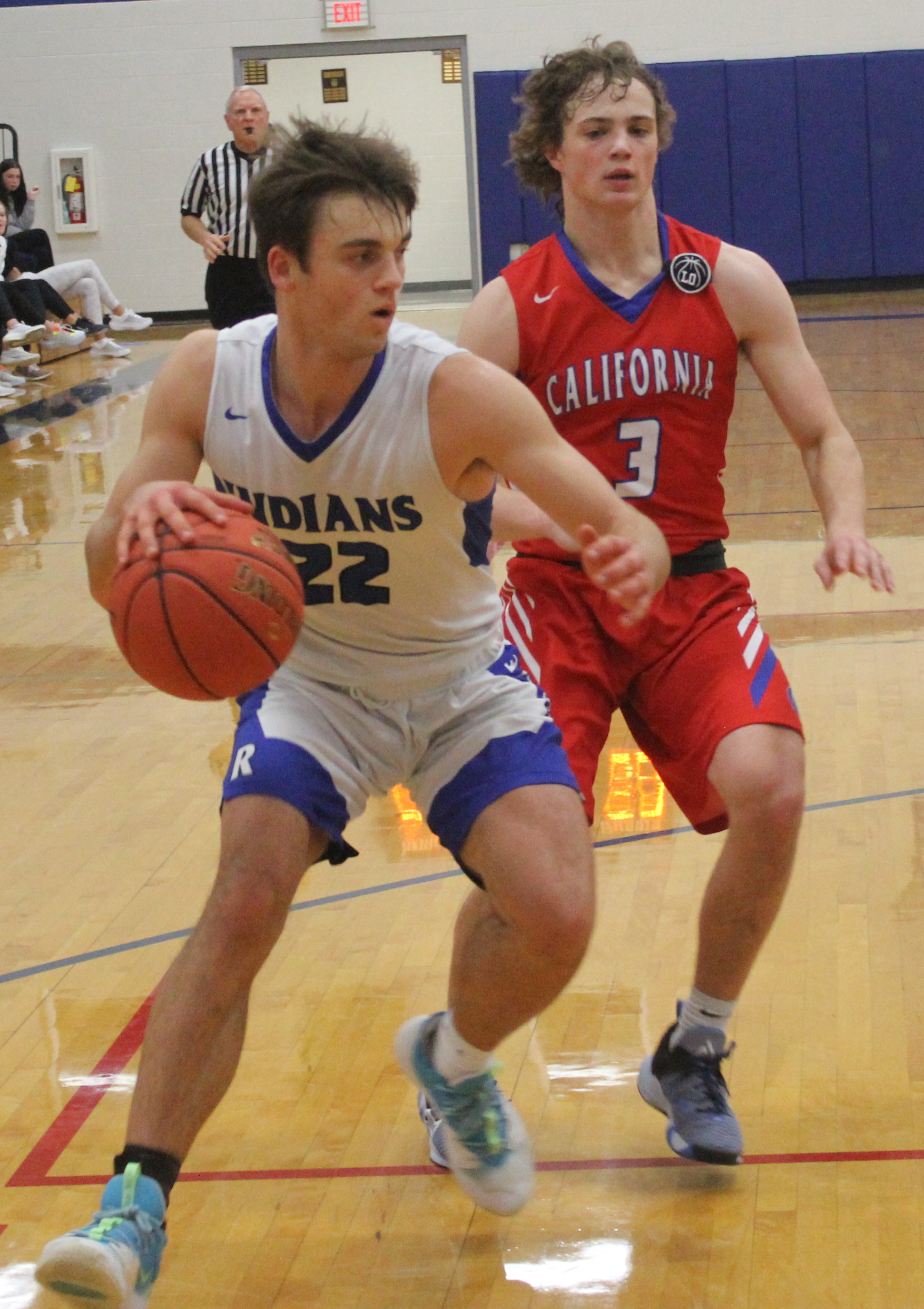 Russellville senior guard Charlie Miller gets past Calen Kruger on his way to the rim and gets to the free-throw line. Miller tied for the team-high 14 points with teammate Jake Schulte. 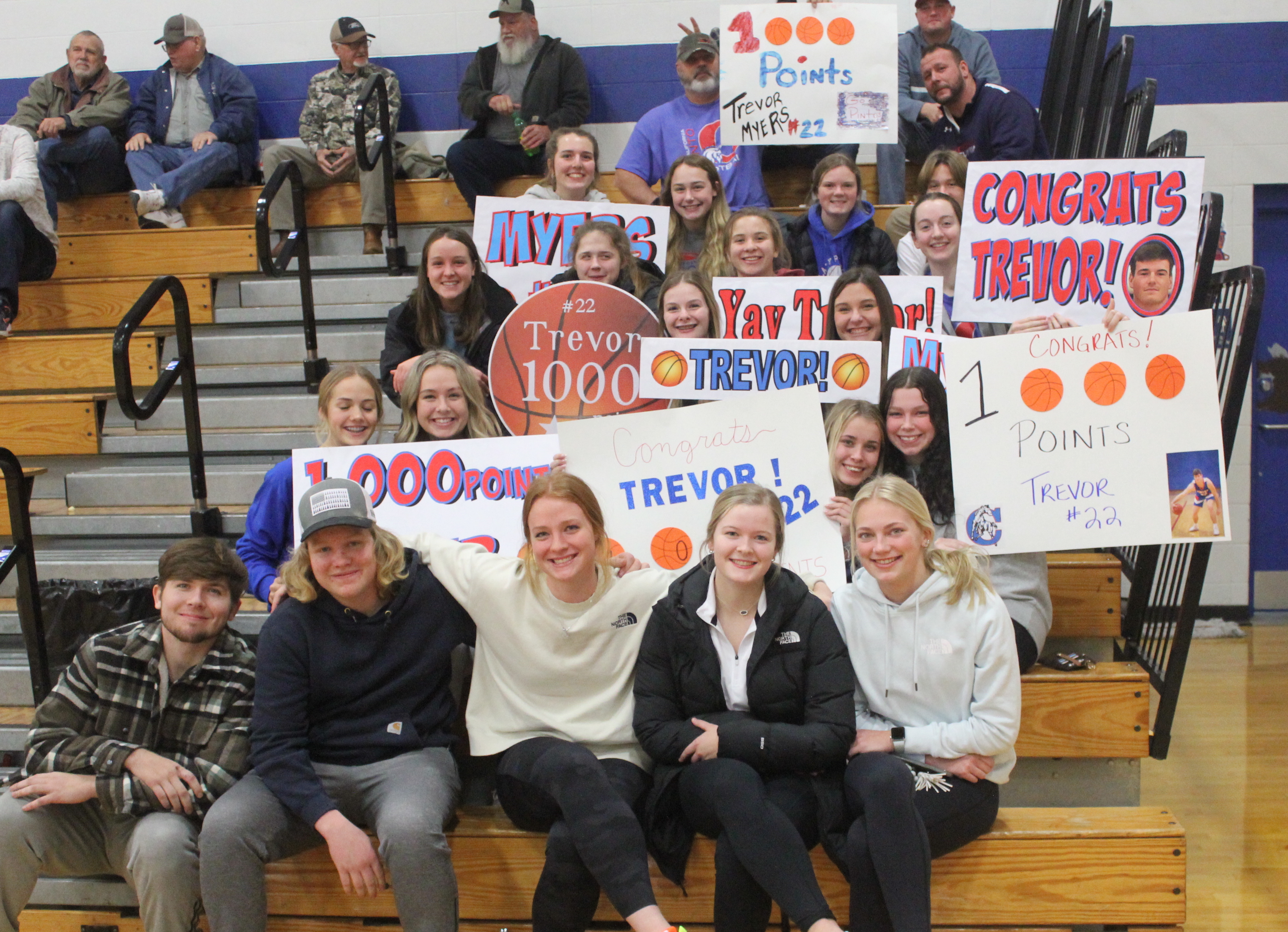