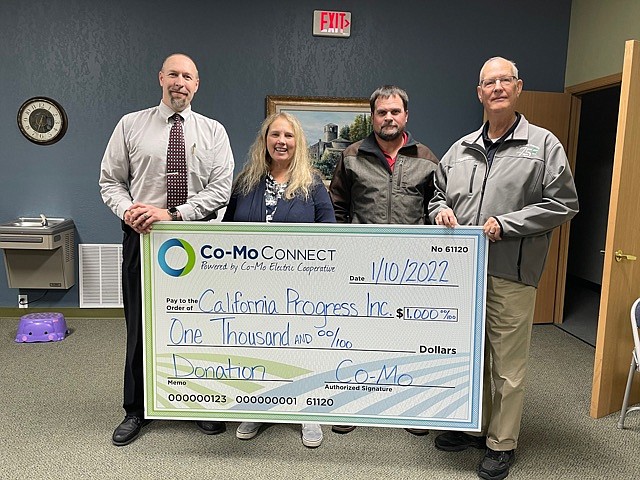 During its first meeting of the new year, California Progress Inc. was presented with a $1,000 check from Co-Mo Connect for the new playground addition at Latham Memorial Family Park.

After accepting the check, members discussed their respective committee reports and went on to discuss potential methods of completing areas of the new park.

CPI Executive Director Susan Hodges said board members from Co-Mo Connect made the decision to give a $1,000 donation to the organization in order to help build the playground to Latham Memorial Family Park.

While there are still areas that need to be finished, CPI President Pam Green noted the check was exactly what the organization needed. She said the additional money allowed CPI to hit their goal in terms of donations.

"We would just like to thank Co-Mo and the community as a whole," Green said. "You might say that this 2022 is going to be CPI's grateful year. We are planning to thank the community for their support. For us, when you can raise (the amount of money that CPI has) in two years on a whim and get it done, you live in a pretty awesome community."

As the group plans for new ways to show the community their thanks, they also spoke on different areas of the park that should be completed and accounted for. Memorial, playground, gazebo, site and fundraising committees revolving around the park were addressed.

While the board moves forward to complete the park project's new playground, they also made sure to plan on attending to any additional matters. Planning for a sidewalk along the park and repainting a number of posts throughout the town were discussed by the board.

Members suggested they enlist the help of prisoners on work release to help with the painting efforts. After a conversation with one of the board's latest members, Mike Staton, who had been working in the prison ministry since 2009, the group discussed the potential of this idea.

The goal would be for the prisoners to paint various posts throughout California to restore them into a proper condition. Although no final decision was made, Staton advised the board to fill out a proposal so the request can be processed through the prison system.

Green said 2022 will be a year for the organization to take things at a much slower pace. After all the hard work that CPI has put into establishing Latham Memorial Family Park, she said, it's important for them to take a step back, relax and appreciate California as well as their own efforts with the project.