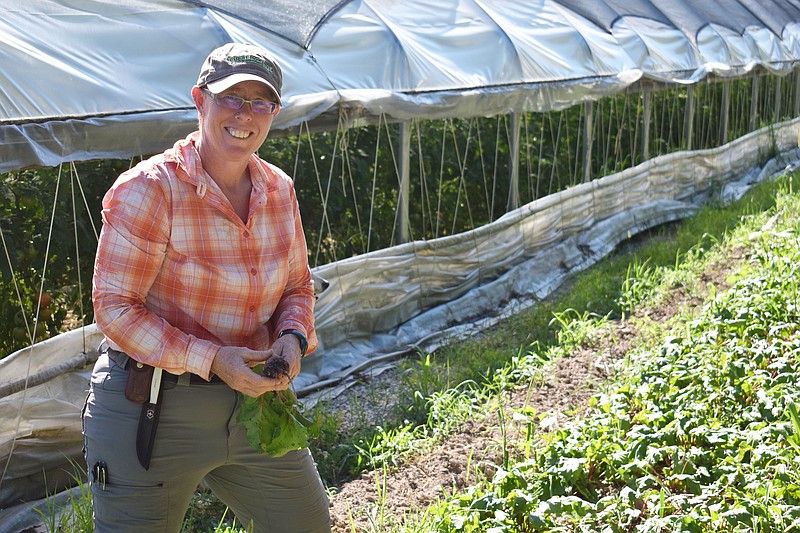 Drive down miles of gravel roads north of Jamestown and you will find Happy Hollow Farm, an 82-acre farm with 11 acres for organic vegetable production. The farm produces a wide variety of produce and ornamental cut flowers for farm members, a farmers' market and Columbia businesses.

Liz Graznak has tended the farm full time since 2010, three years after she and her partner purchased the farm. Even with five full-time employees, three part-time employees, three additional workers (on Saturdays who help with the farmers' market) and volunteers, the farm is a lot of work. Unlike farms using large machinery to plant, treat and harvest their crops, most of the work at Happy Hollow Farm is done by hand.

The seeds of Graznak's interest in organic farming were sown by a farm much like her current one. While studying plant breeding in graduate school at Cornell University in Ithaca, New York, Graznak participated in an internship at a local farm operating with the community-supported agriculture (CSA) model -- which her current farm also utilizes.

According to the U.S. Department of Agriculture (USDA), the CSA model "consists of a community of individuals who pledge support to a farm operation so that the farmland becomes, either legally or spiritually, the community's farm, with the growers and consumers providing mutual support and sharing the risks and benefits of food production." In essence, members or shareholders of a farm offer financial support (or volunteer for a discounted cost) in exchange for a regular "share" of the farm's harvest. Members of Happy Hollow Farm receive a share each week. Graznak said her farm is the only CSA farm she knows of in Mid-Missouri, but she said there are CSA farms near Kansas City, St. Louis and Springfield.

Graznak's experience in graduate school opened her eyes to how her food was grown, and what chemicals were used to grow it. Thus, in addition to emphasizing community, it was important her farm was organic. Happy Hollow Farm is U.S. Department of Agriculture-certified organic.

"Before I knew anything or was aware of where food was coming from, I never thought about what chemicals got used and sprayed on food to grow food or kill bugs," she said. "But when I joined the CSA and was connected to that farm, then it was becoming more apparent to me. And, being in grad school, I knew a little bit about what it took to grow food, but we were doing research."

Modern "traditional" farms use a variety of pesticides to keep unwanted insects and plants away from valuable crops. In addition to eating the crops, insects can carry diseases that can kill crops. Unwanted plants, such as weeds, consume nutrients in the soil needed by the crops for healthy growth. While pesticides are only meant to kill insects and weeds, their effects on humans, livestock and other animals are questionable. Some pesticides have been linked to causing cancer.

"(T)o grow conventional vegetables, it takes a lot of chemicals," Graznak said. "A lot of known-carcinogenic chemicals. Cancer-causing chemicals. And I was like 'Why in the world are people eating that stuff? Why are people putting that into their bodies?'"

Instead of using pesticides, Graznak simply plants more of each crop. The bugs target a portion of the crop, which is later burned off to save the remaining portion.

Graznak also said soil quality and health can have a dramatic impact on how a plant attracts bugs.

When Graznak started her farm, she implemented a work requirement to ensure her members had the same experience she did in graduate school.

"My goal was to get members out here," she said. "Just pretty much with the intention of getting the members out to the farm so they could be here and see what is happening and see what it takes to put those vegetables in those boxes every single week."

Due to the growth of her farm, she no longer has a work requirement for her basic membership level. However, members can still volunteer to receive their share at a discounted cost -- and experience the farm.

Graznak also uses her farm to mentor other farmers -- just like she did in college and before starting Happy Hollow Farm.

"...(B)efore I had my own farm, I interned on other people's farms and worked for other people," she said. "Because I didn't know anything about farming, I had to learn somehow, and those were really great experiences I had. And so when I started (Happy Hollow Farm), it was important to me to be able to provide the same opportunity to other young people who maybe wanted to get into farming."

Of the estimated 25-27 interns from the past 11 years, Graznak said only two continued to farm. Most of the others left farming behind entirely. Despite that, she considers her farm a successful learning tool for others.

"It makes me sad (only two are still farming), but it also really makes me happy because their experience here afforded them the opportunity to learn what it actually takes to do this," she said. "They were able to not spend a ton of money and make a ton of mistakes trying to do it themselves ... just to actually realize they don't actually want to do it."

"There's a huge host of different vegetables that grow wonderfully in Mid-Missouri," Graznak said. "And I grow them, seasonally."

Her harvest not only benefits her members, but she also sells her products at various locations around Columbia. In addition to the Columbia Farmers Market, Happy Hollow Farm produce is sold at both Clovers locations in Columbia, as well as various restaurants. Graznak sells her floral products online, on the University of Missouri-Columbia Campus and in the Columbia Farmers Market. The farm also sells to local florists. 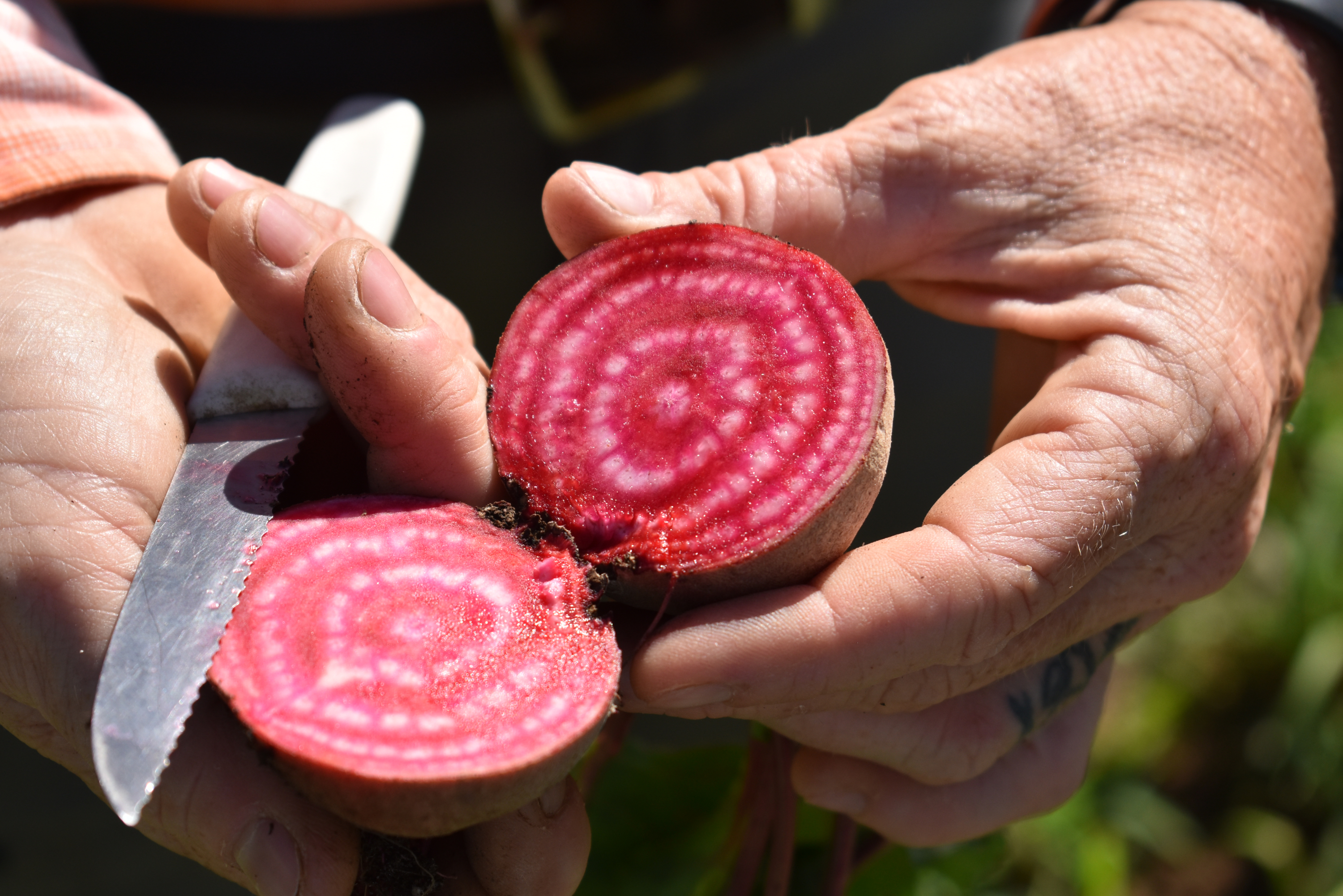 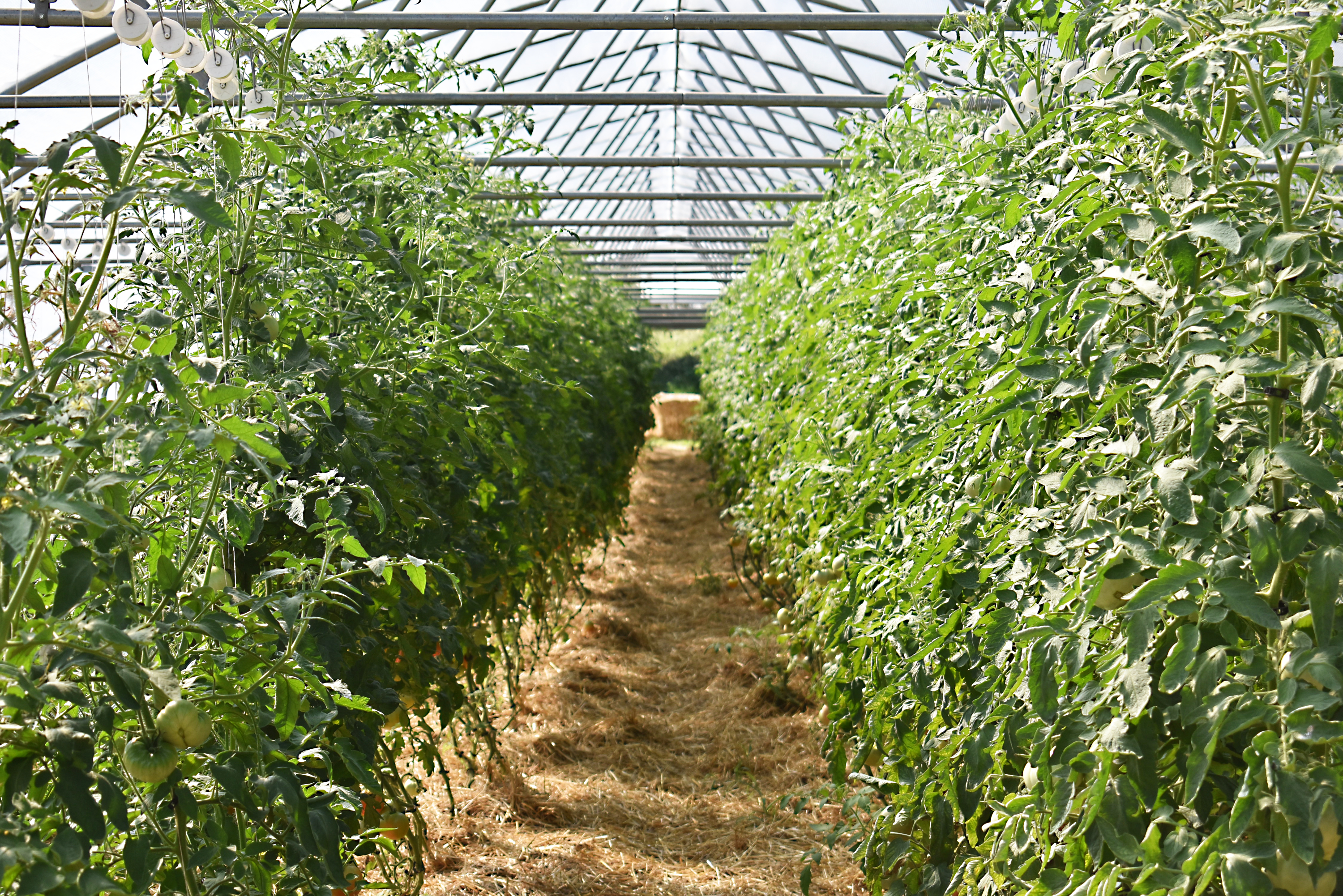 Rows of tomato plants fill the inside of greenhouses, as seen in this July 18, 2022 photo, at Happy Hollow Farm near Lupus, Missouri. The organic farm grows various types of tomatoes. (Photo: Democrat photo/Garrett Fuller) 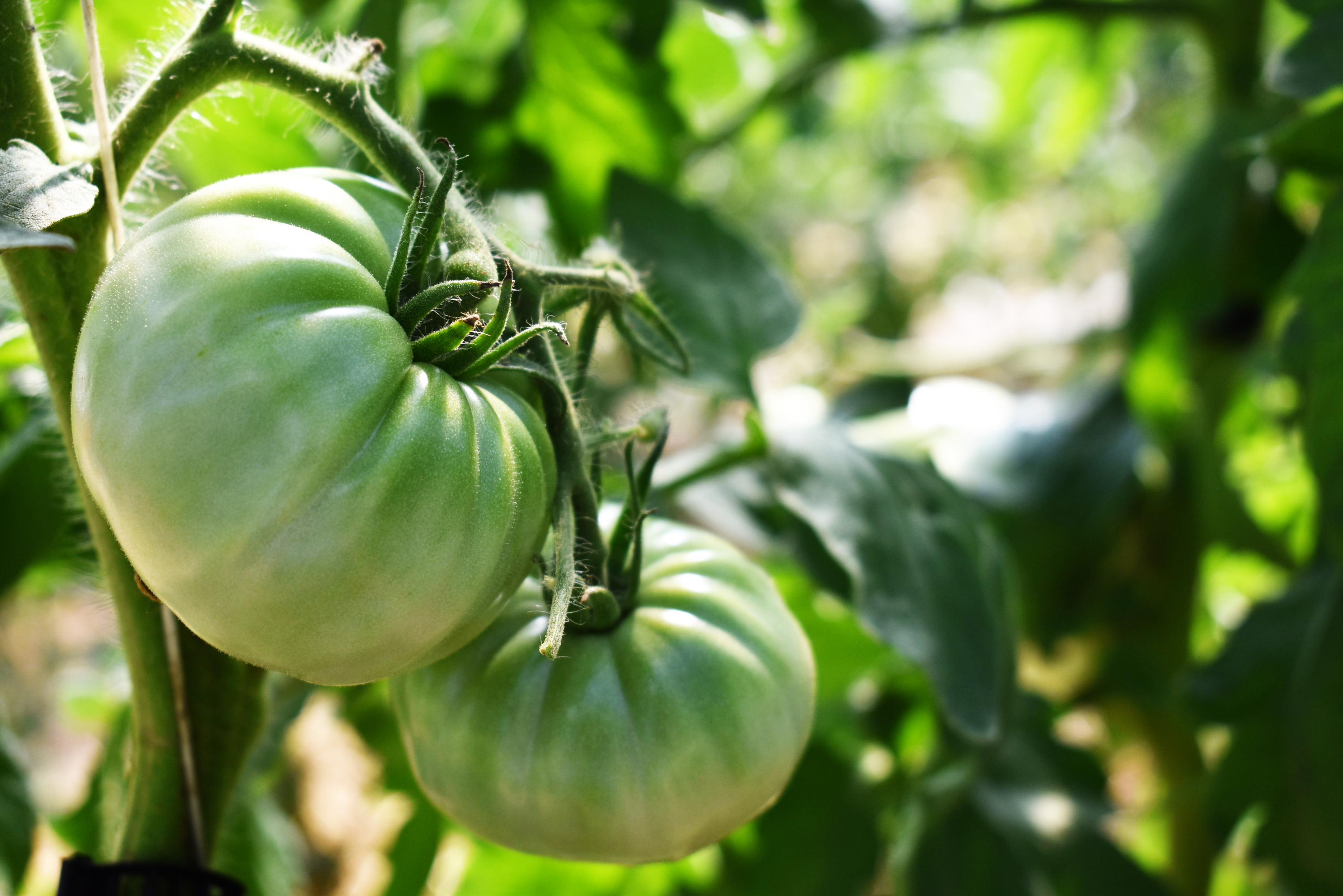 Unripen tomatoes are seen on a vine July 18, 2022, at Happy Hollow Farm near Lupus, Missouri. The organic farm grows various types of tomatoes, and a wide array of other vegetables. (Photo: Democrat photo/Garrett Fuller) 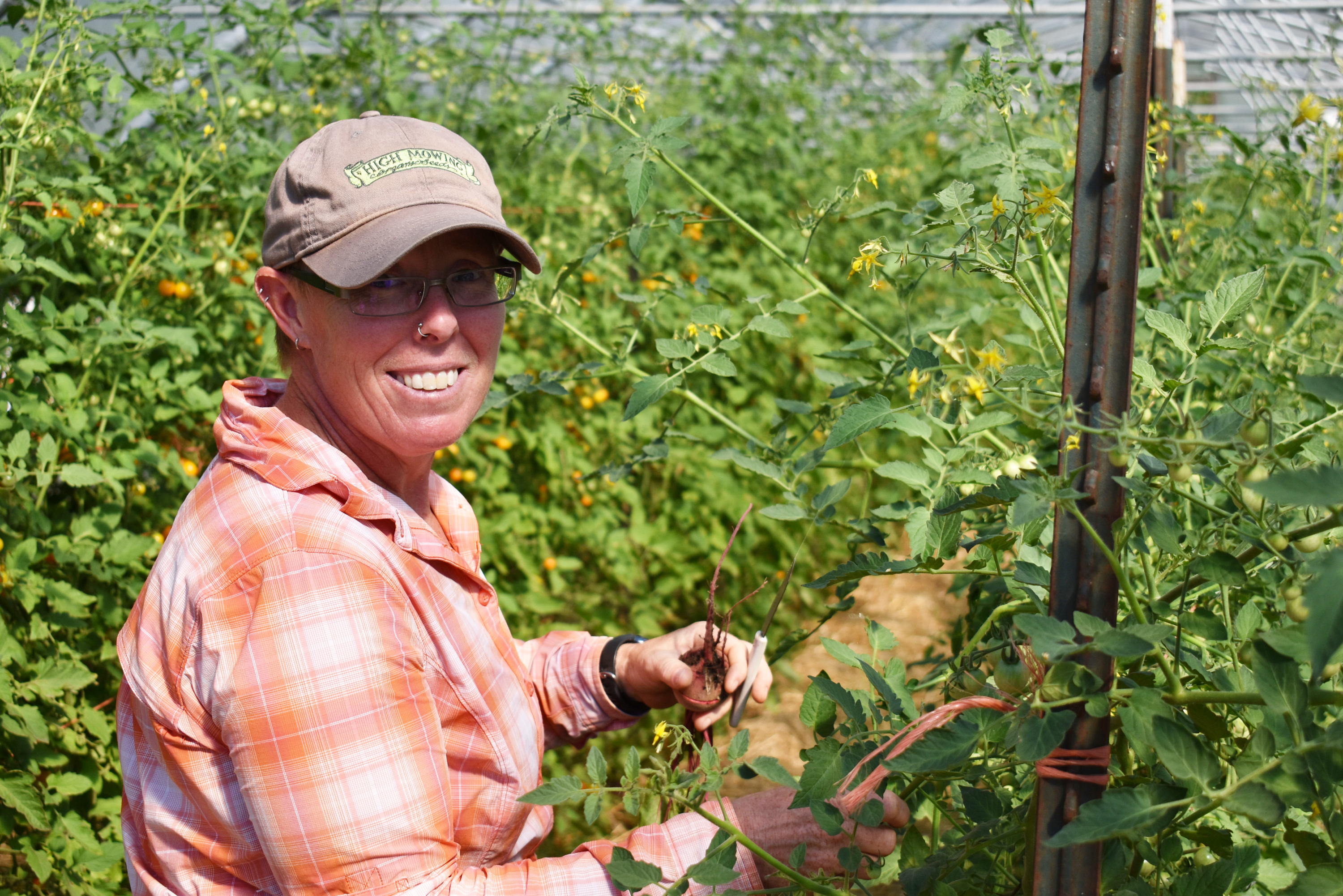 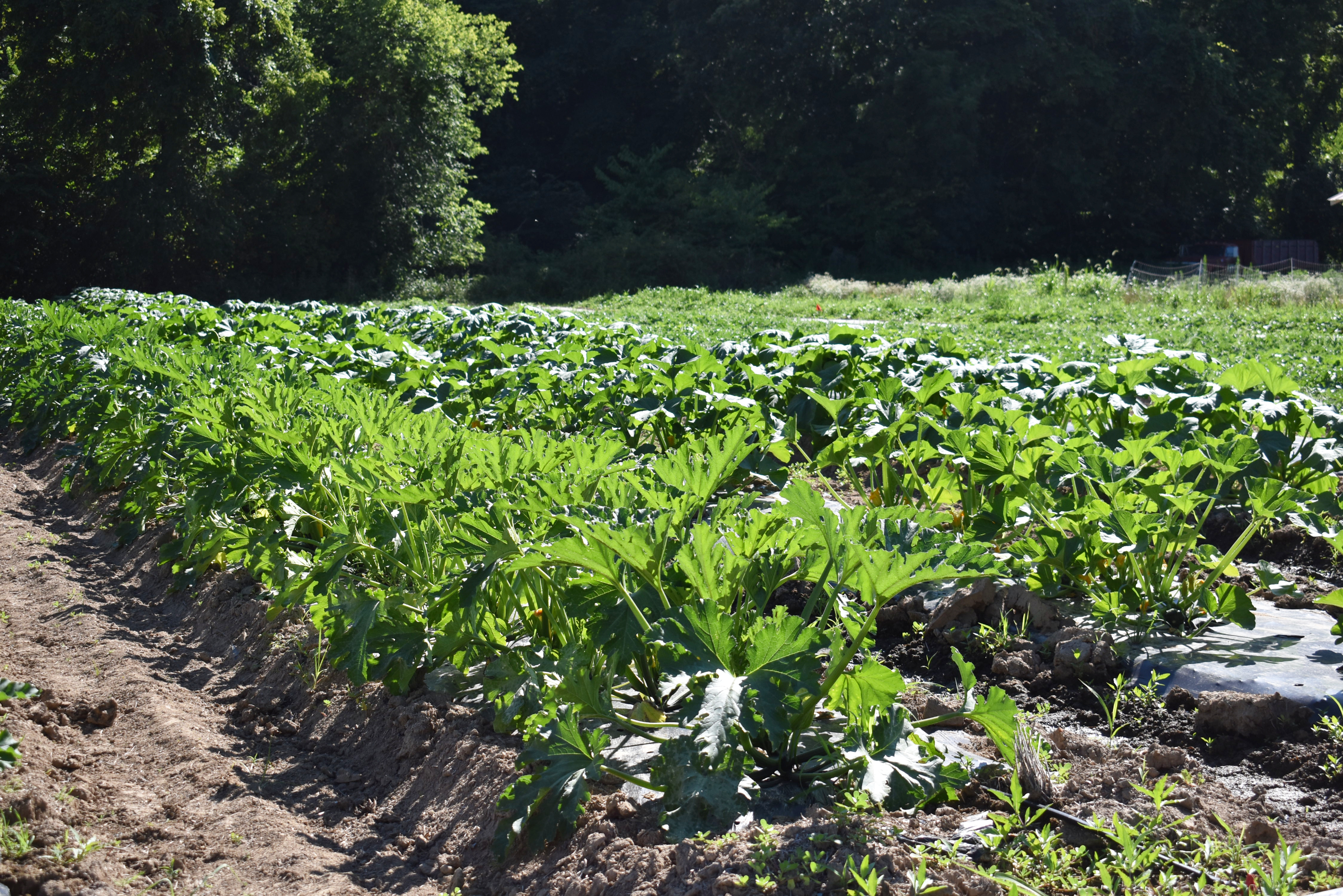 Instead of using pesticides, which can be known to cause cancer, Liz Graznak simply plants more of each crop on her farm, Happy Hollow Farm, near Lupus, Missouri. (Photo: Democrat photo/Garrett Fuller) 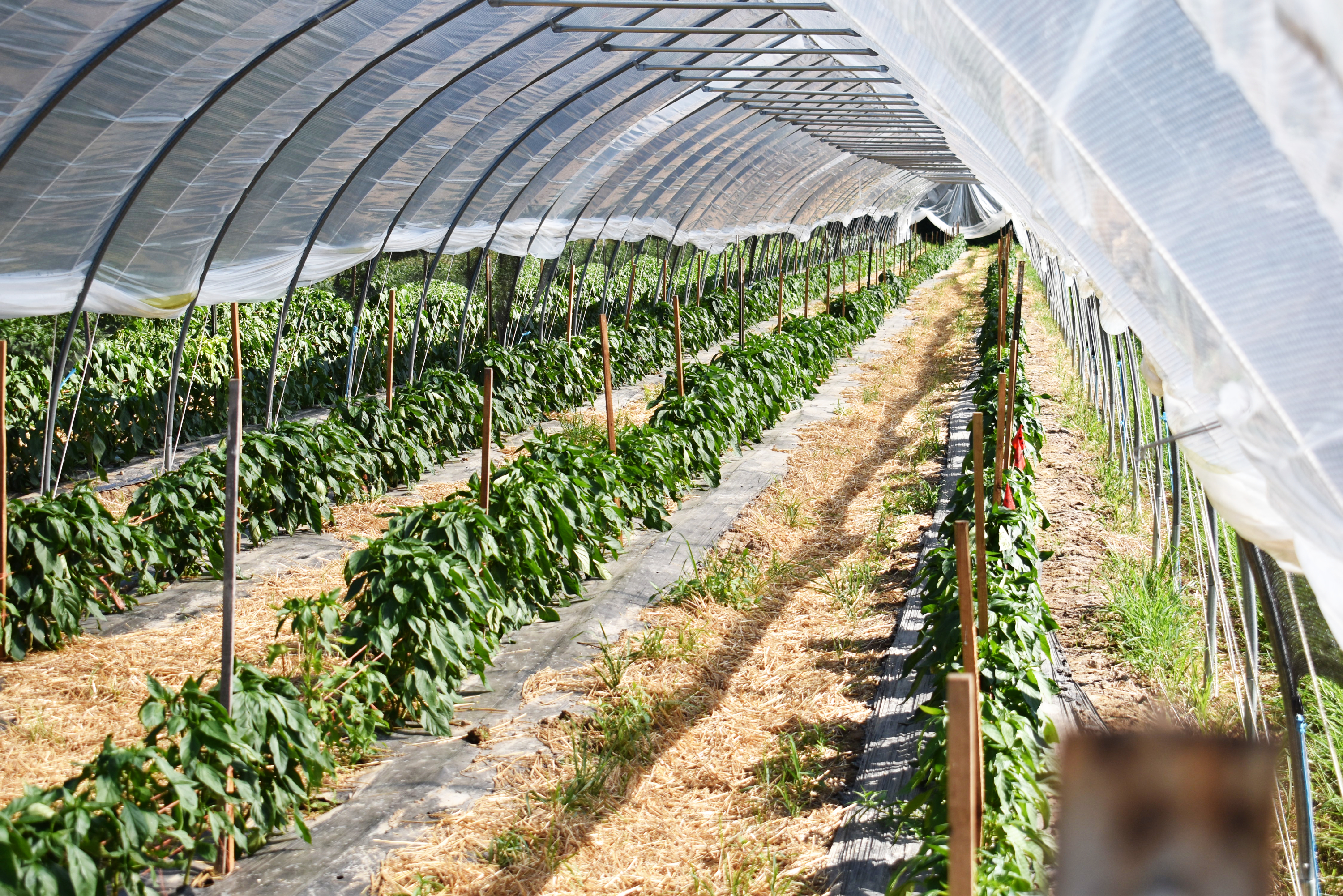 Plants line the inside of a high tunnel July 18, 2022, at Happy Hollow Farm near Lupus, Missouri. The farm grows organic produce for its members, as well as the Columbia Farmers Market, both Clovers locations in Columbia, and multiple restaurants. (Photo: Democrat photo/Garrett Fuller)