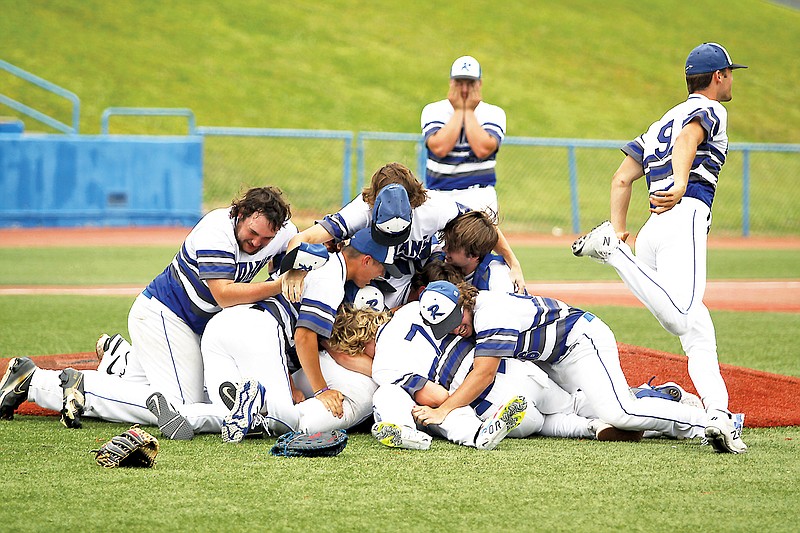 Russellville players form a dogpile near the pitcher’s mound after the final out of Tuesday’s Class 2 state championship game against Portageville at U.S. Ballpark in Ozark. (Greg Jackson/News Tribune)

OZARK, Mo. -- In his final high school baseball game, Russellville senior Logan Cinotto delivered, both with his arm and his bat.

Cinotto pitched 6⅔ solid innings and went 3-for-3 with three singles and two RBI, helping deliver the Indians a 5-3 victory Tuesday afternoon against the Portageville Bulldogs in the Class 2 state championship game at U.S. Ballpark.

“Logan is such a competitor,” Russellville coach Lucas Branson said. “We felt like we had two No. 1 pitchers all year. Logan may not get enough credit, but he pitched like the best pitcher in Class 2 today.”

The state title is the first in program history for Russellville (29-4), which shattered its previous single-season wins record by nine victories. In their previous Final Four appearances, the Indians took third place in 2006 and 2018.

“This is pretty indescribable,” Branson said. “It’s going to take a while to set in.”

Cinotto was also the winning pitcher in relief of Monday’s 3-2 semifinal victory against Plattsburg. He finished the season with a 10-0 record.

After throwing 27 pitches against Plattsburg -- two less than the limit that allowed him to pitch the next day in the state title game -- he threw 112 pitches against Portageville, finishing with four walks and three strikeouts while limiting the Bulldogs to three runs and five hits, all singles.

“I definitely lied to coach Branson at the start of the game,” Cinotto said. “I was pretty sore, my elbow was hurting, my shoulder was hurting. But I know everybody on the team has a lot of confidence in me.

“Coming into this game, I took a little bit of medicine, threw a couple (pitches) and hoped the adrenaline would kick in.”

Isaiah Kauffman -- whose status was questionable after leaving Monday’s game with cuts on his face from a collision at first base -- opened the bottom of the first inning for the Indians with a single to left field. The next batter, Jake Schulte, tripled into right-center field, scoring Kauffman easily to put Russellville in front 1-0.

“Anytime in the Final Four, you’re always worried about what that first inning is going to be like,” Branson said. “… Offensively, we were able to get things going for us, and it allowed everybody to relax just a little bit.”

Cinotto then began his tear at the plate by ripping the first pitch he saw from Portageville’s Trey Benthal into left field for an RBI single, scoring Schulte.

Cinotto swung at the first pitch in all four of his plate appearances.

“I knew (Portageville’s pitcher) wasn’t going to overpower me with anything,” Cinotto said. “He threw a lot of strikes.”

Russellville extended its lead to 3-0 in the second inning on a double-steal, as Nolan Gartner was safe at second base and Alex Oligschlaeger scored without a throw to the plate.

Portageville scored its first run in the top of the third, as a shallow fly ball hit to right field popped out of the glove of a diving Josiah Herman, allowing Alex Winsor to score from second base with two outs.

The Indians answered with four hits in the third inning, as Charlie Miller and Cinotto had back-to-back singles to start the inning. Both runners advanced a base on a flyout and Jesse Daniel reached on an infield single, scoring Miller to make it 4-1.

Russellville finished the game with 13 hits, as Schulte joined Cinotto with a three-hit game and Daniel and Gartner each had two hits. Branson said his team had an early-morning batting practice session at Ozark High School before the game.

“We got up here and I liked how we were hitting,” he said, “even though we left a lot of people on base.”

Cinotto’s only shaky inning on the mound came in the top of the fourth. Aaron Dunlap hit a one-out single into center field, then CJ Kelley and Connor Johnson both drew walks to load the bases for Winsor, Portageville’s leadoff hitter.

Winsor hit a 1-0 pitch into left field for a single, scoring a pair of runs to cut the Indians’ lead to 4-3.

“Even though he was struggling locating pitches, they weren’t really putting great swings on some of his stuff,” Branson said. “I told him you just have to be able to slow yourself down.”

A groundout put the tying run at third base and the go-ahead run at second base, but Cinotto got a flyout to Herman in right field to end Portageville’s inning.

“I wasn’t quite nervous,” Cinotto said. “I had a lot of trust in these guys, I’ve been playing with them since we were 7 years old.”

Cinotto pitched 1-2-3 innings in both the fifth and the sixth. Then his offense gave him a little bit of a cushion.

In the bottom of the sixth, Schulte drove the first pitch he saw over the left fielder’s head for a leadoff triple, his second of the game.

“I just wanted to put the ball in play for my team,” Schulte said. “I knew it was a big moment, time to step up. It felt good to make solid contact and send it to the outfield.

“I haven’t hit that many triples in my life.”

Two batters later, Cinotto helped himself out, driving an 0-1 pitch into left field for an RBI single, scoring Schulte to give the Indians a 5-3 lead.

Cinotto -- who is so superstitious, he has played with a rip in his right pants leg since the midseason and a huge hole in his right stirrup since the sectional round -- was at 97 pitches at the start of the seventh inning. He hit Winsor to open the inning, then got a foul pop-up for the first out. Next stepped up Benthal, Portagesville’s No. 3 hitter.

Benthal worked a nine-pitch at-bat and smoked a line drive to left field, but it was right at Russellville’s Bryce Bryant, who caught it for the second out.

“Coming into that batter, I knew I only had a couple pitches left,” Cinotto said. “I was really trying to get a ground ball out of it on one or two pitches. After the third or fourth pitch, I knew he was going to be my last batter.

“I fought as hard as I could, because I knew he was going to give me a run for my money.”

Daniel came in to relieve Cinotto, seeking his third save of the season. Daniel got Thomas Frakes to ground out to Miller, who moved to third base, to end the game.

Then it was time for the Indians’ final celebratory dogpile of the season.

“That one was really special,” Schulte said. “First time in Russellville history. That felt so go to do it with those guys.”

Benthal pitched all six innings for fourth-ranked Portageville (31-4), as he struck out six and walked two, throwing 67 of his 95 pitches for strikes.

Bryant, Kauffman and Miller each had one single to round out Russellville’s hitting attack.

Russellville, which was ranked No. 1 in Class 2 at the end of the regular season, will retain the No. 1 ranking in the upcoming final poll at the conclusion of the state championships.

“It’s a credit to all of the people that have supported us over the years,” Branson said, “all the players that have come through. They’ve all had a hand in this.

“To be able to go live out their dreams on this stage, it’s phenomenal.”

Russellville gets past Salisbury in Class 2 sectional

Russellville gets past Eugene in 10 innings for district title