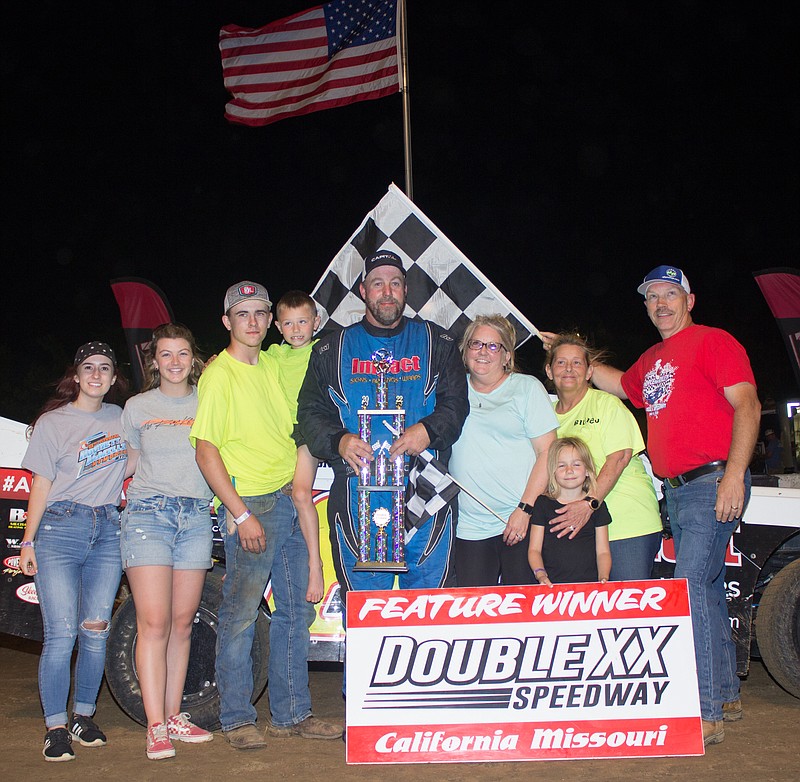 Every year the dirt racing faithful make the pilgrimage to Double X Speedway to honor a driver that called the little quarter-mile his home track. Jesse Hockett made his mark in the sprint car world from Pennsylvania to California and from Washington to Florida, yet he loved turning laps in California. More than 40 sprint cars, with wings and without, joined the fans to pay homage to honor Hockett and celebrate with his family Sunday night.

The first class to take the track were the super stock drivers competing in two heat races to kick off the evening. The first heat saw Jody Romig on the pole with Darek Wiss, with one feature win to his credit at Double X this season, on the outside of the first row.

Wiss would get the jump on Romig heading into turn one and Derek Henson would move up to second by turn two. Henson would challenge the leader repeatedly and was able to catch him but not make the pass and would settle for the runner-up position behind Wiss. Romig finishes third with point leader Eddie Keeran in fourth and John Clancy would complete the field.

The second heat would see Brandon Hays and Danny Monroe, both making their first starts at the track this season, lead the field to the green flag. Monroe took the early lead until a bobble in turn one on about the fifth lap allowed Hays to slip by on the bottom side to take the point. Hays would lead the remainder of the distance with Monroe recovering to place second. Joe Miller crossed the line third with Tyler Crocker running a strong fourth. Dusty See would complete the five-car running order.

The second seat was brought to the green by the front row of Jason Howell and Wesley Smith. It was the Smith show as he opened a straightaway lead in a matter of three laps and maintained the advantage for the duration. Howell would finish second over Zach Clark, Brad Wyatt finishes fourth and Wyatt Burks crossed in the fifth position with Garrett Hulsey in sixth.

The third was paced by Steven Russell and Joe B. Miller in the front row. Miller would lead early but Russell would take the preferred line through turns three and four to take the lead for lap one. As the race went on Miller would use the top shelf to catch the leader and come up a car length short at the checkered.

The winged sprint cars competed in three qualifying heat races to set the feature lineup for the Hockett Memorial.

The first saw Nathan Ryun and Miller sharing the front row. Miller took to the top shelf to go to the lead with Ryun in second. Ryun would slip off the top of turn two bringing out a caution on lap three. The restart was more of the same as Miller opened up a lead over second-place Miles Paulus. At the checkered, it was Miller, Paulus, Quinton Benson, Bradley Ryun and Nathan Ryun. Russell Potter was sixth and Daryn Langford was seventh.

The second head saw California native Broc Elliott and Kearney's Austin O'Neal bring the field to green. Elliott would lead the first four laps before O'Neal would get a run on the leader heading into turn three and make the pass. O'Neal would claim the checkered flag with Broc Elliott second, Taylor Walton third, Evan Martin fourth and Mackenzie Borchers fifth. Tyler Elliott would finish seventh and Scotty Milan would claim seventh.

The third and final heat had Tyler Blank and Kaitlin Boland bringing the field to the green. After the initial start was called back by track officials, on the restart Blank and Kyle Bellm would go side by side through turns one and two. Bellm would have the advantage into three but Blank would use a slide job to gain the advantage through turn four and would set sail. Blank would claim the win over Bellm with Chase Porter advancing to third, Ben Brown finished fourth, Wagner was fifth, Boland sixth and Natalie Doney seventh.

The 15-lap Super Stock main event would have Wiss on the pole with Hays to his outside. Hard-charging Henson and Monroe were on the second row. Henson would follow polesitter Wiss to the front and take the lead in turns three and four on the opening circuit and would quickly open a five to six car length lead over the field. Wiss would settle into second.

An early race caution for Clancy stopping on the front straight would bunch the field. Henson would again continue his lead with Wiss remaining in second with position battles taking place behind the leaders.

On the caution on lap 11 for Hays, Henson ducked into the pit area for overheating issues and was unable to continue. This would find Clancy inheriting the lead after he raced his way back up through the field recovering from the early caution.

The Powri Wingless Sprint Car Racing feature event had many of the fans teeming with excitement as the field of 20 lined up for 25 laps of racing excitement. Wagner starting on the pole as a result of earning the most passing points in the qualifying heat races put the JHR 77 to the point for the first two laps before Wesley Smith moved to the top spot.

Wagner would run second but the stars of the race would be Riley Kreisel running the top and Russell smoothly rolling the bottom groove as they moved up through the field. With Smith leading Kreisel, Wagner Russell were all trading positions.

A lap 20 caution reset the field behind the leader with Kreisel attacking the top shelf and Russell slowing allowing Smith to defend the top spot and allowing Kreisel to claim the runner up by a nose over Miller, who was in the mix at the end as well.

Morgan crossed the stripe in fourth and Russell wound up fifth at the checkered. Burks was sixth, Doney seventh, Wagner held on for eighth, Schudywas ninth and Clark completed the top 10.

When the winged sprint cars took to the track for their 25-lap feature it was anybody's race. Miller and O'Neal were in the front row. Miller would shoot to the lead with Blank, Paulus and Bellm all following him. It was for naught as Natalie Doney and Kaitlin Boland would get together in turn four before one lap was complete.

A two-by-two restart was on tap and this time Miller would again swiftly move into the lead followed by Bellm and Blank. Miller would hold the top spot through one caution on lap eight and for the next nine laps after that.

Bellm would keep the leader close but couldn't muster a pass while Blank rode in third a couple of car lengths behind.

A lap 17 caution would bunch the field once more. On the restart, Bellm shot low in turn one and pulled a slide job to take the lead from Miller. Blank began his plan to advance and was able to overtake Miller for the second four laps later.

At the checkered, it was Bellm claiming victory with Blank in second, Miller third, Paulus in fourth and Walton completing the top five. Sixth place went to Porter with Benson taking seventh, Brown would finish in eighth, Martin in ninth and Wagner rounding out the top 10.

The Dylan Bias Memorial Race, featuring the super stock division is Sunday night. Family and friends of Bias have collected more than $6,000 in prize money for the event.