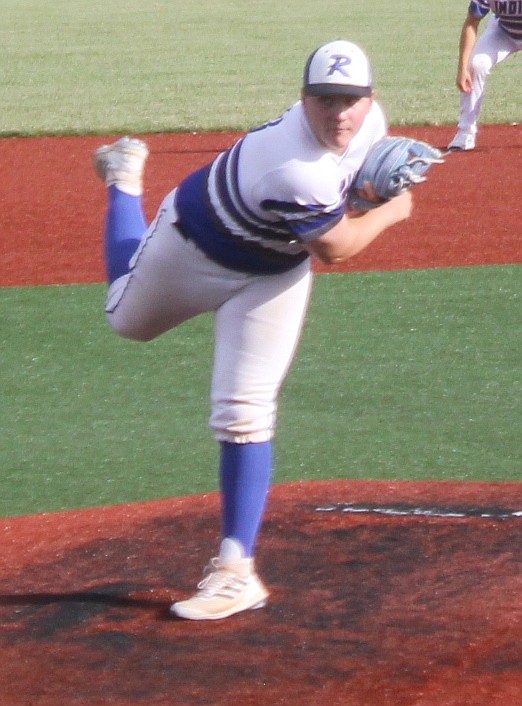 The Russellville Indians defeated the Plattsburg Tigers 3-2 on Monday in the Class 2 semifinals at U.S. Ballpark in Ozark.

The result of Tuesday's Class 2 championship game between Russellville and the Portageville Bulldogs was unavailable at press time.

The semifinal game quickly developed into another pitching showdown with Charlie Miller going against Plattsburg James Steggall. Steggall entered the game with a 1.02 ERA, while Miller's ERA stood at 0.74.

Russellville got on the board first in the top of the first when Logan Cinotto hit a line drive single to center to bring home Isaiah Kauffman.

The game remained 1-0 Russellville up to the top of the fourth, when Plattsburg's Nathan Bash hit a ground ball to Indians shortstop Cinotto. Bash ran into first baseman Isaiah Kauffman, who went down and had to be helped off the field. He was later diagnosed with a concussion and would not return. Ethan Hickey took over at first base.

Plattsburg tied the game at 1 in the same inning on a sacrifice fly by Paul Nelson.

In the top of the eighth inning, the Indians got a runner on first with one out. Chris Seaver then took a 1-2 pitch to deep right-center field for a triple and gave Russellville a 2-1 lead by driving in Brennen Stinson from first. On the next pitch to Jesse Daniel, the junior delivered a drive to center field for a double to extended the lead to 3-1.

The Russellville Indians and the Putnam County Midgets squared off May 25 in the Class 2 quarterfinals. The two teams met almost two months earlier on March 28, when the Midgets won 10-9 in nine innings. Russellville won the rematch by pulling out a 3-2 victory to make its first state semifinal appearance since 2018.

The game between the first-ranked Indians and the third-ranked Midgets was originally scheduled to be played at Russellville High School. But the venue was changed to South Callaway High School in Mokane because of rain.

"When you get to this level of the state tournament, you expect to play great competition," Russellville coach Lucas Branson said. "We knew that getting through our district was going to be very, very tough. We knew that in the sectional and quarterfinal game, we were going to have to be grinding out ever single pitch.

"We've been working on that really since January and it's a huge credit to our kids to really buy into the changes that we've made this season for a mental approach standpoint," Beanson added.

"That was probably two of the top two or three pitchers in the state in our class," Branson said. "They just competed their butts off. We knew going in that we were going to have to do everything right from a standpoint offensively just to be able to score a run or two. I really felt like if we could get to three or four runs, we would be in a good spot because I knew Logan's mentality on the mound was going to match the same mentality as they had."

"He was amazing," Daniel said. "He did everything we wanted him to do and more."

Both offenses started cold until Schulte hit a fastball over the right field fence for a solo home runin the third. It was Schulte's second straight game with a solo shot.

In the bottom of the fourth, Pearson stepped up to the plate and put an end to a streak of seven consecutive strikeouts by Cinotto by grounding out to second base. Zach Heidenwith then chopped a single into left-center field for a single. Putnam County head coach Blane Robinson brought in Owen Ream to run. Ream advanced to second on a sacrifice bunt, then he tried to steal third base. Russellville looked to cut him off, but the ball was overthrown for an error and Ream scored to tie the game at 1.

Both teams were held scoreless in the fourth and fifth as Cinotto and Pearson continued to put strikeouts on the score card.

In the top of the sixth, Miller led off with a single down the left-field line. Two batters later, Seaver walked. It was the only walk given up by Pearson in the game. Daniel was next up to the plate and took his first pitch to left field for a double to score Miller and give Russellville a 2-1 lead.

"I just got my pitch down low. I just drove it and kept my knob to the ball," Daniel said. "When it got to the outfield, I didn't know what do to. I was just so excited."

Seaver advanced to third base on the hit and was looking to score a third run. On a 1-2 pitch to Bryce Bryant, Pearson's pitch got away from the catcher and Seaver scored from third to put the Indians up two.

In the bottom of the sixth after Putnam County made it a 3-2 game when Carter Quint hit a two-out single to right field to score teammate Chase Tomlin. The Midgets had the tying run on third and the go-ahead run on second. With Cinotto over 100 pitches, he slammed the door on Putnam County with another strikeout to end the inning.

Cinotto was ecstatic to get out of the inning and preserve a 3-2 lead and hand over the reigns to Daniel to finish the job in the seventh. Daniel had been in a closeout scenario earlier in the playoffs when he pitched four relief innings against Eugene in the district championship game eight days earlier. Daniel struck out the first two batters. Seaver then ended the game on a flyout to deep center field to give Russellville a 3-2 win.

"It's amazing to be going on," Daniel said. "It's once in a lifetime chance and we're going to take advantage of it." 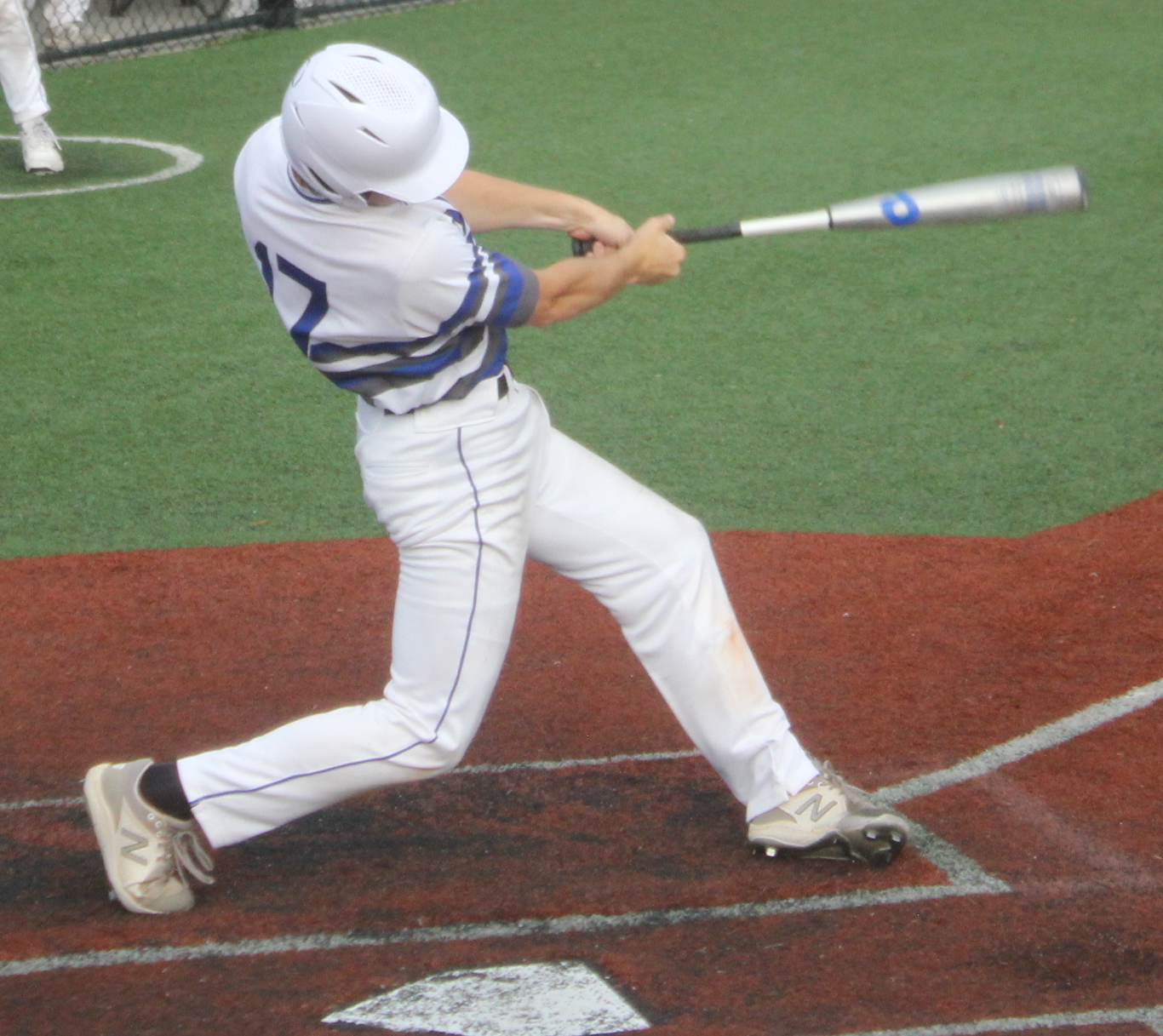 Junior Jake Schulte gives Russellville the first run of the game with a solo home run to right field. It was Schulte's second solo dinger in two games. 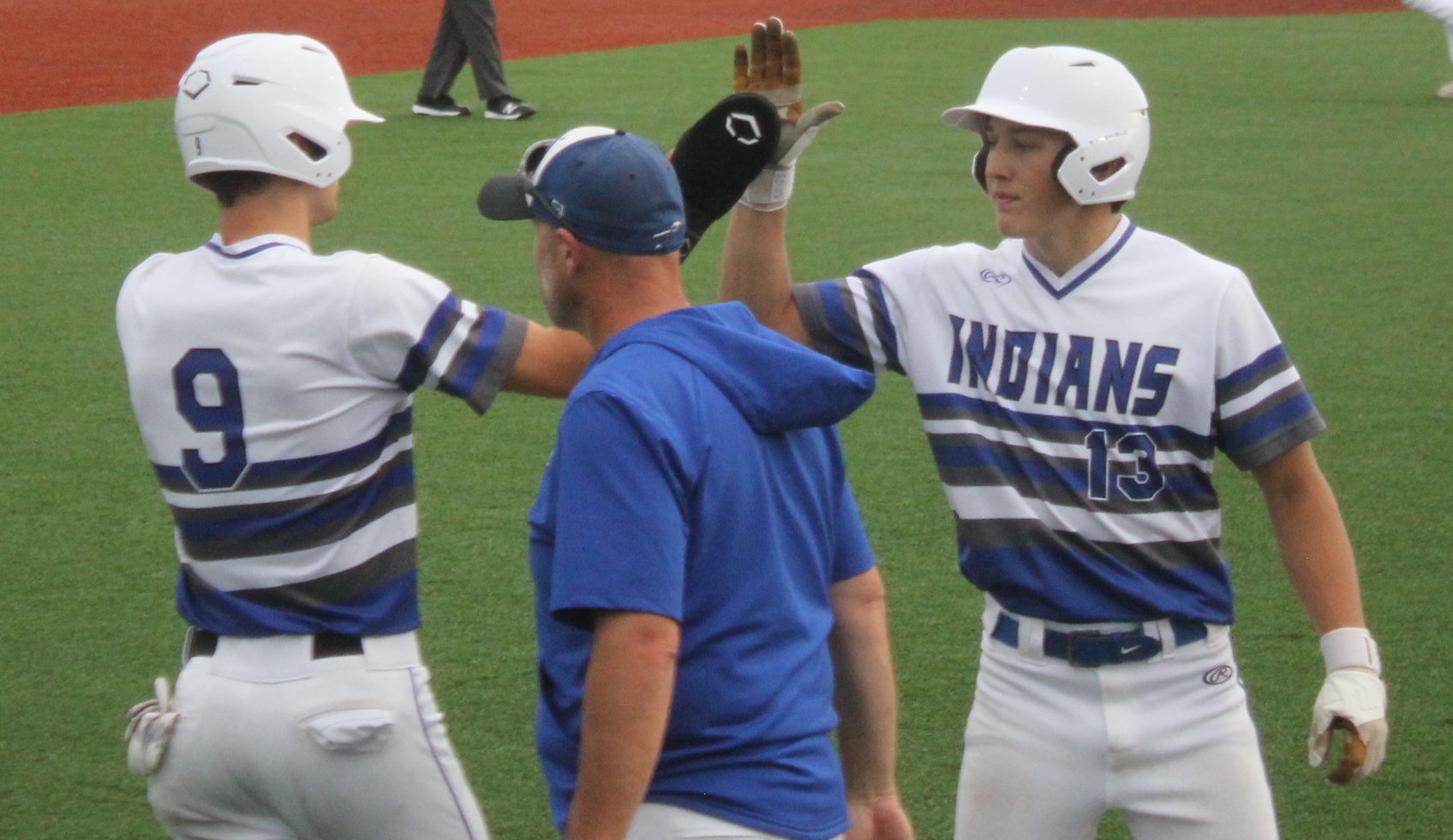 Russellville's Charlie Miller (left) and Chris Seaver (right) share a high-five after both runners get on base in the sixth. Both scored runs in the inning to give Russellville a 3-1 lead. 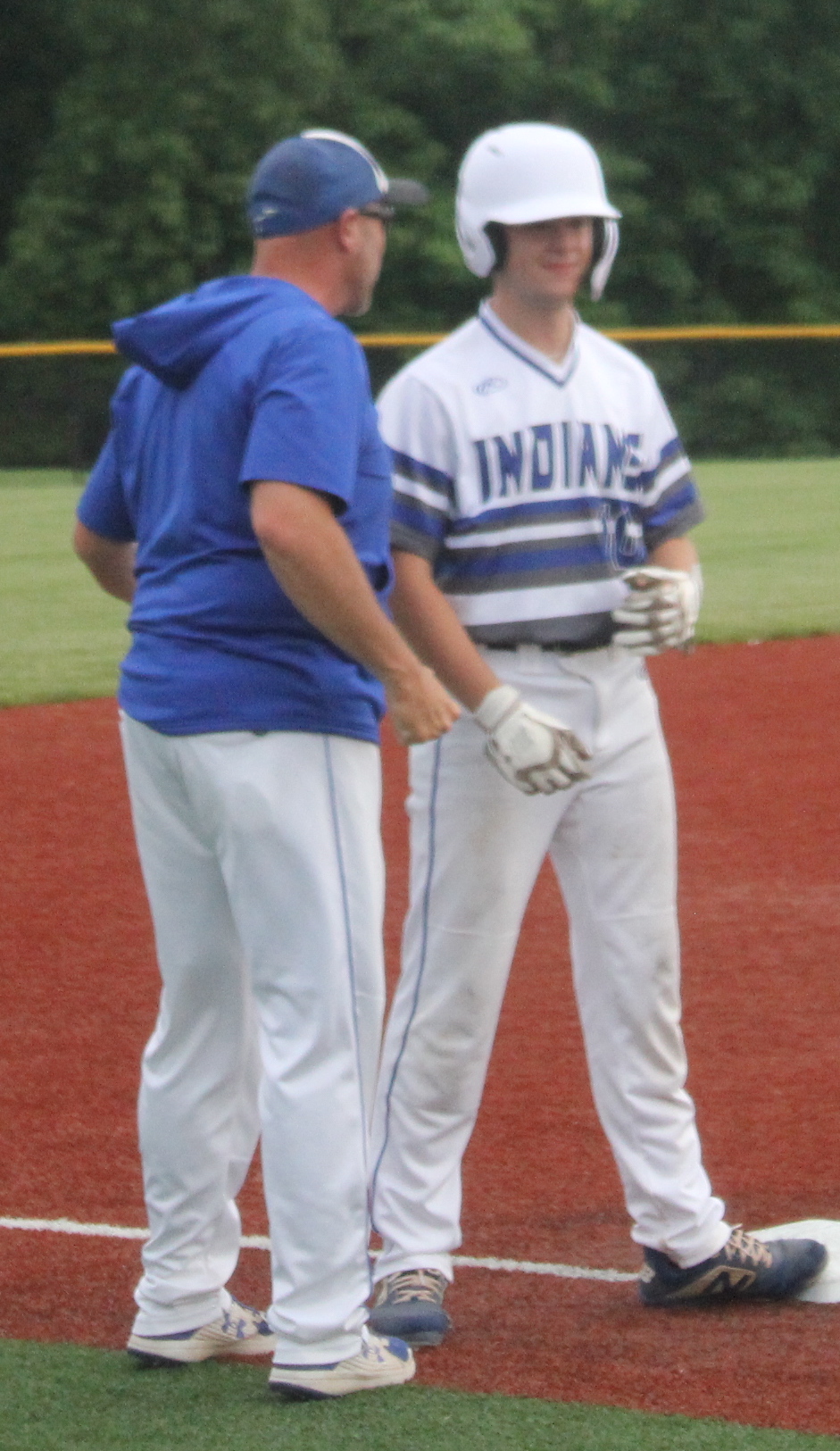 Junior Jesse Daniel (right) gets a congratulatory pep-talk from head coach Lucas Branson after giving Russellville a 2-1 lead in the sixth on Wednesday. 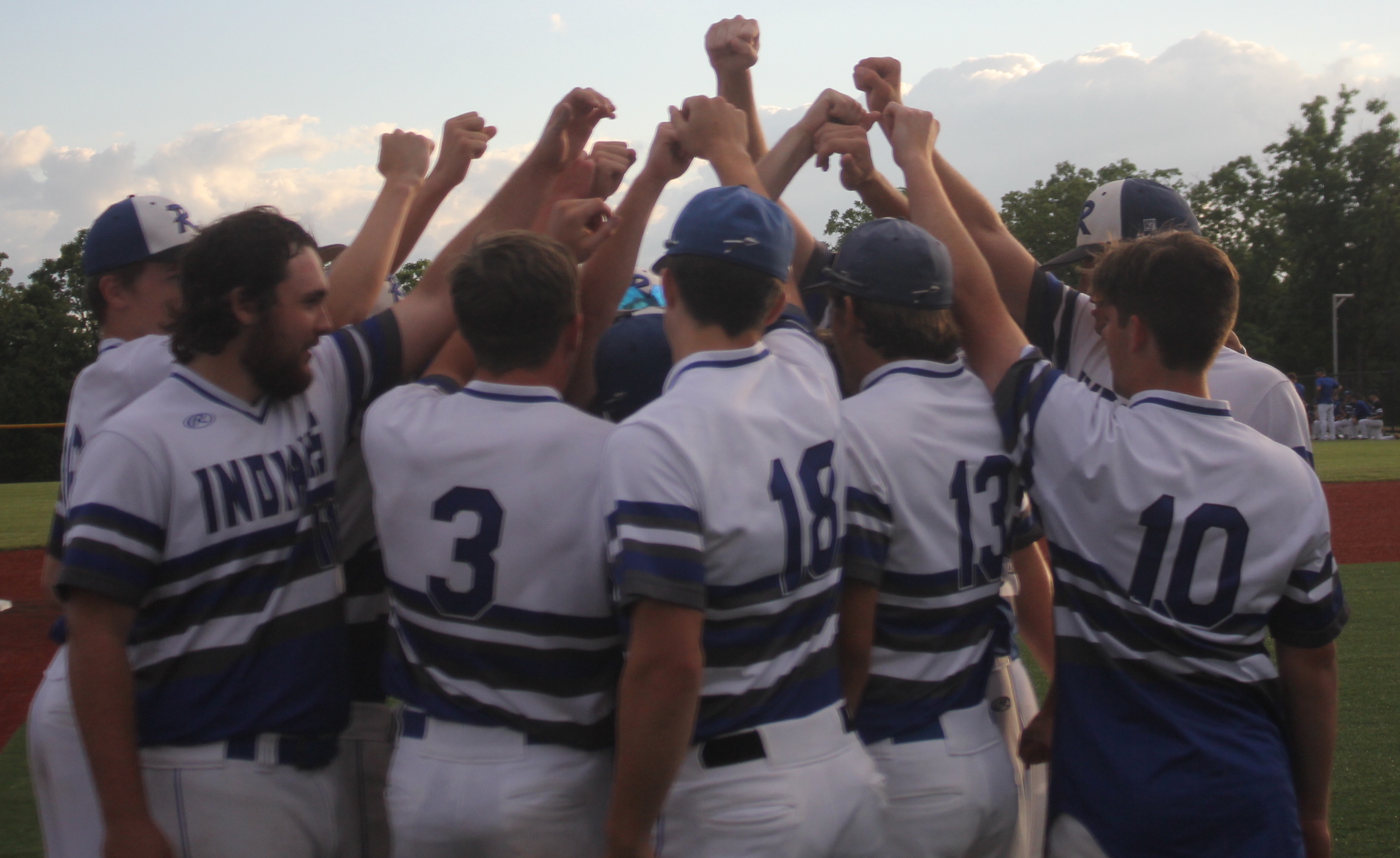 Russellville celebrates their 3-2 quarterfinal win over Putnam County. They will play Plattsburg in the State semifinals at US Ballpark in Ozark.

The Indians pay their respects on Memorial Day before their semifinal game against Plattsburg. 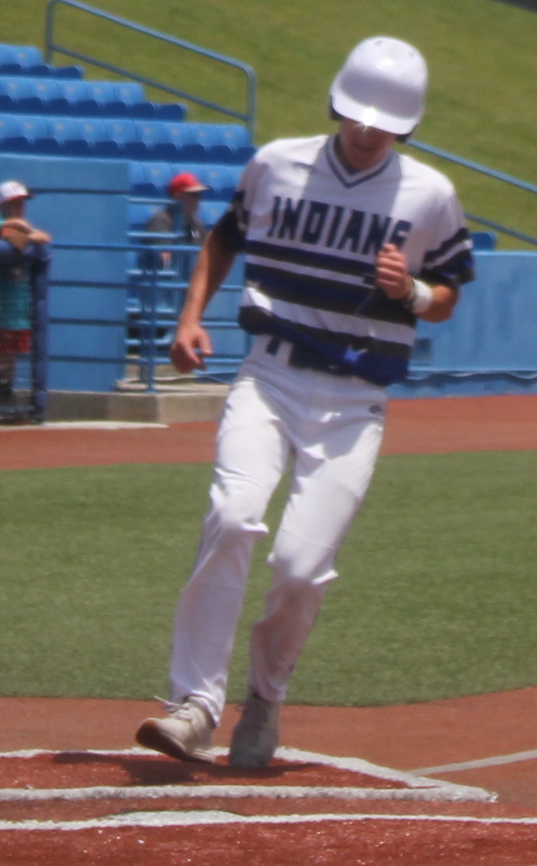 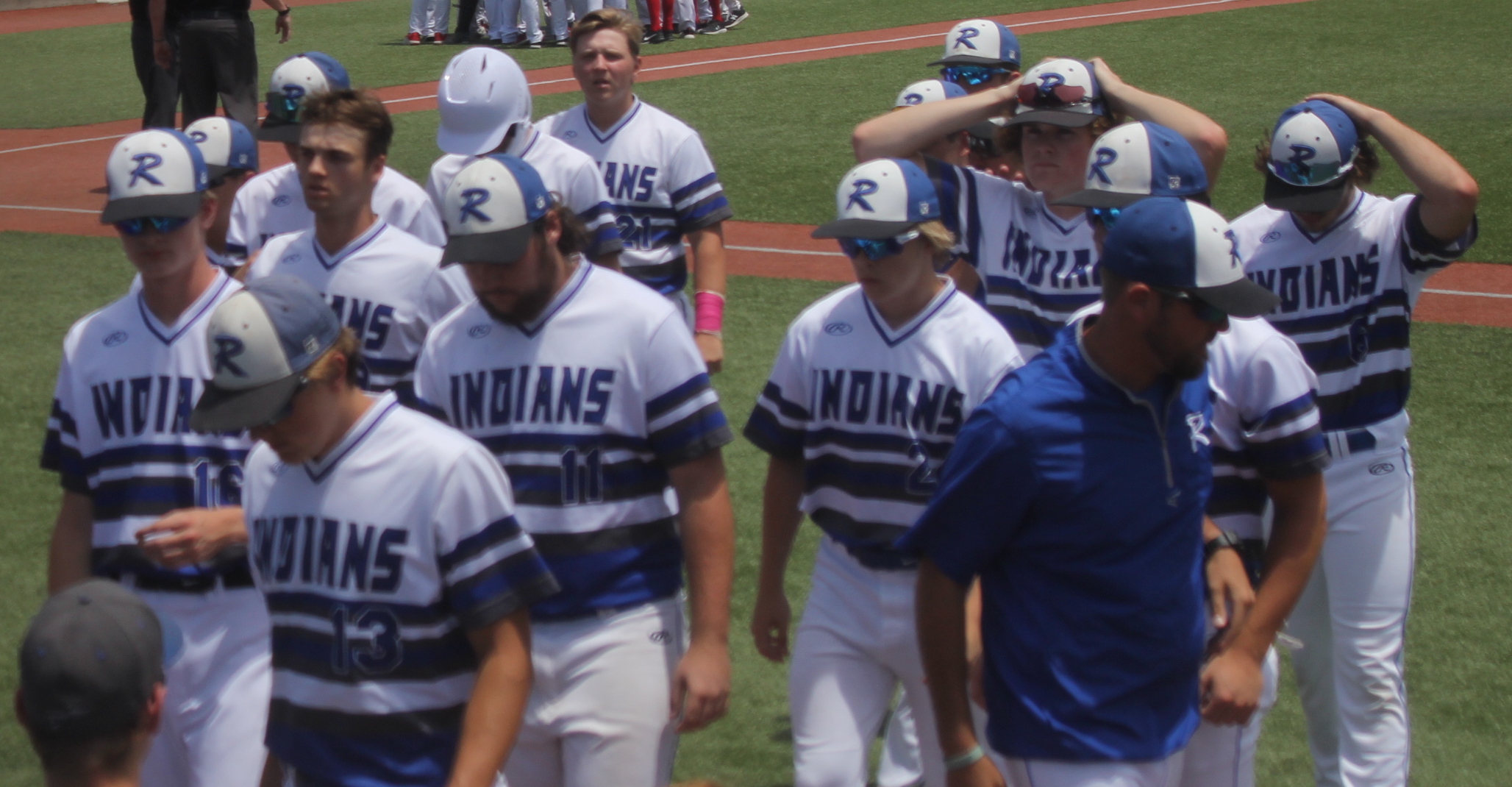 The Russellville Indians get ready to take on the Plattsburg Tigers. 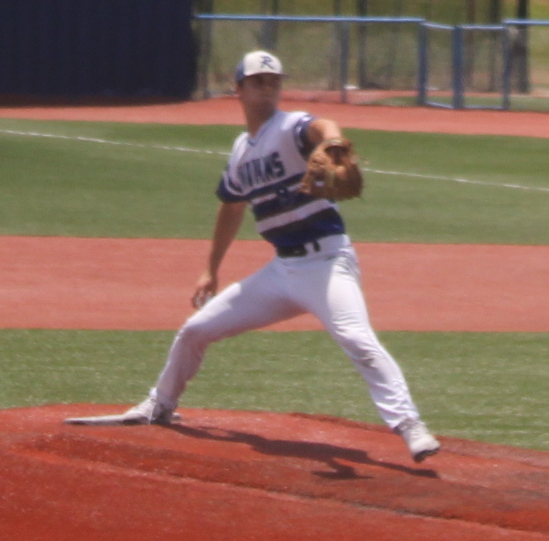 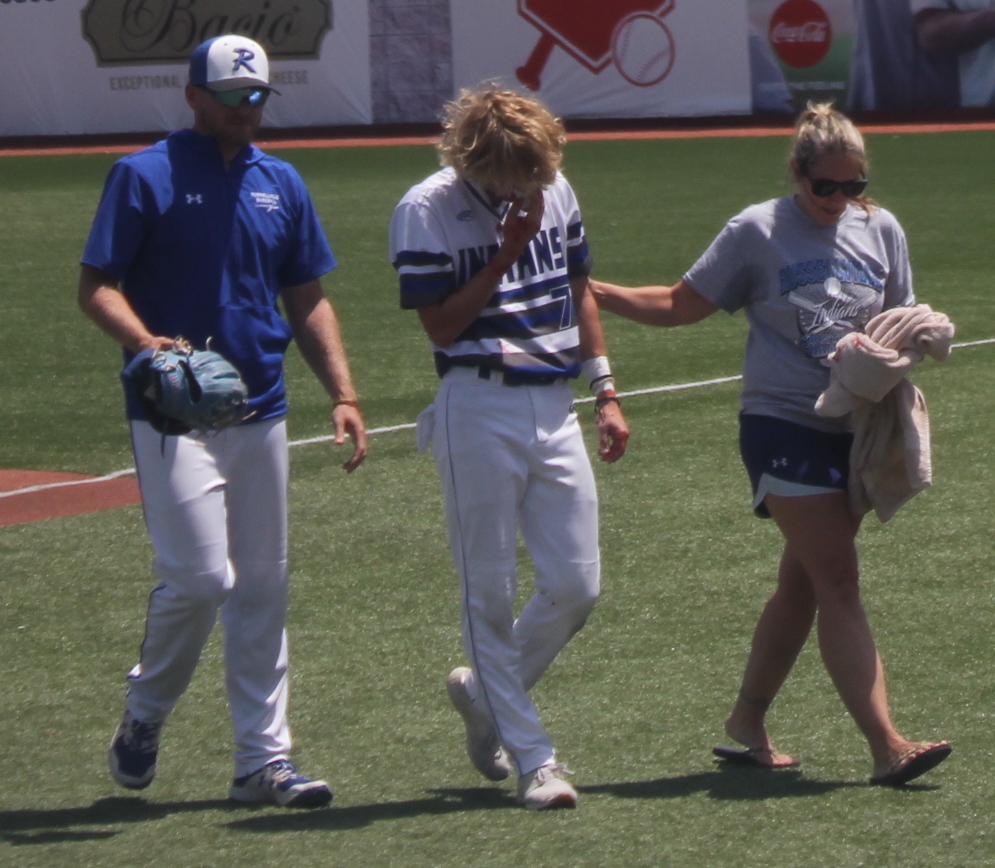 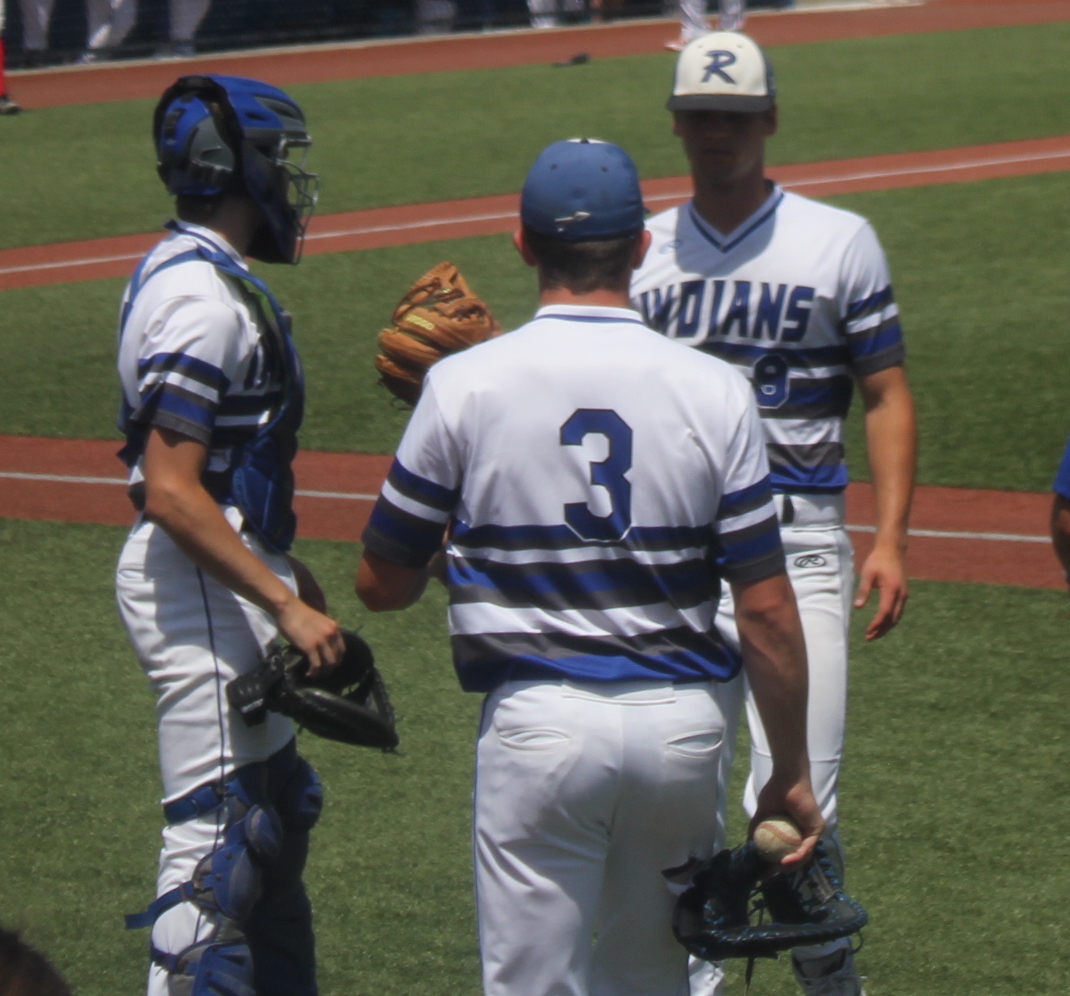 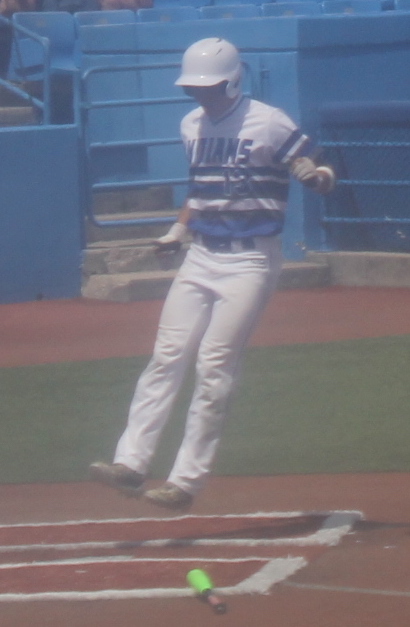 Junior Chris Seaver jumps on home plate to give the Indians a 3-1 lead in the eighth. 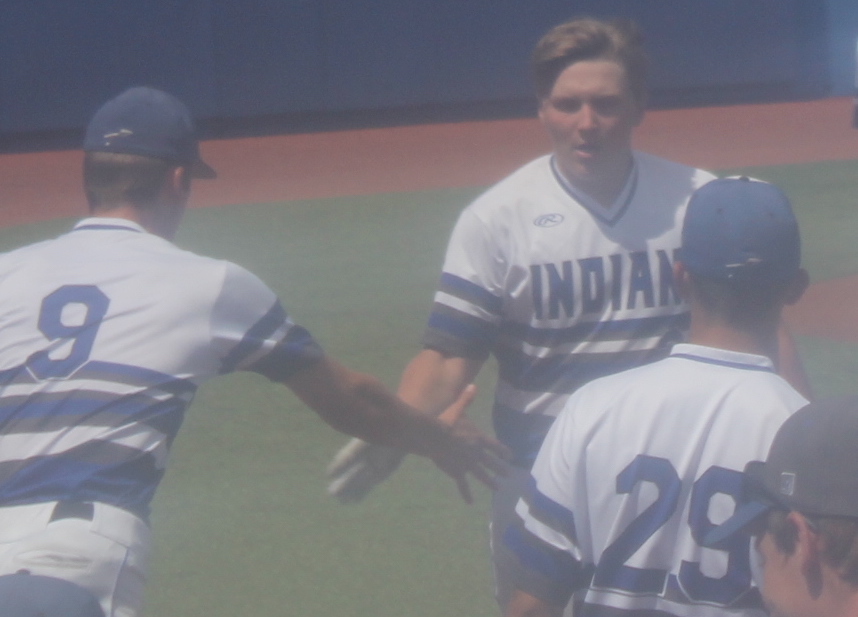 Senior Logan Cinotto gives the Indians a 2-1 lead in the eighth inning against the Tigers. 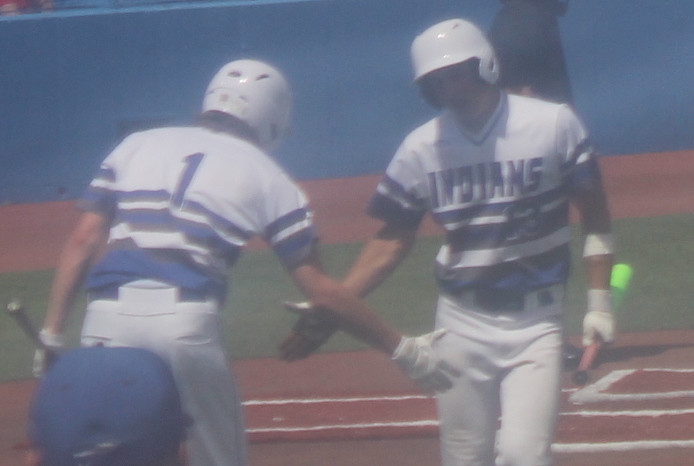