Superintendent Sanders ‘blessed’ to work in California before retirement 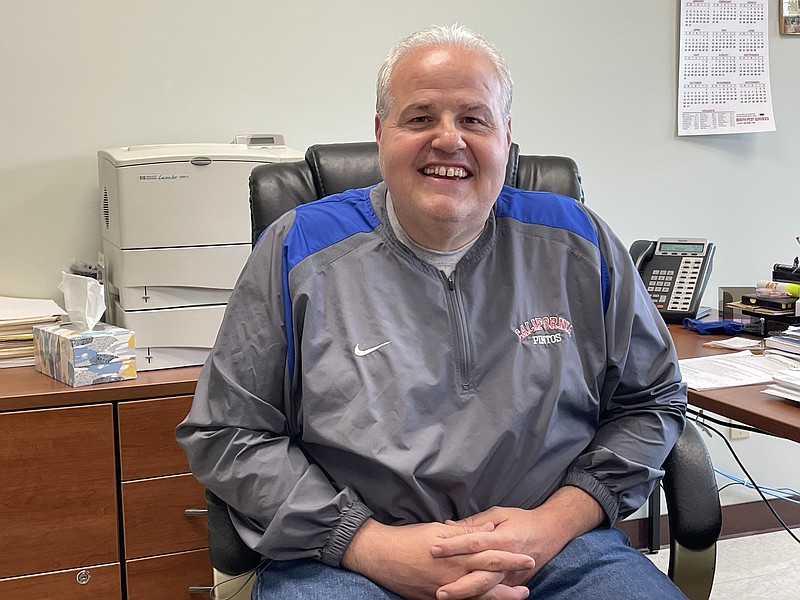 Democrat photo/Kaden Quinn California R-I Superintendent Dwight Sanders finishes up his last year in education before his retirement. He says he hopes to have given students various opportunities and good memories throughout the years.

California R-1 School District Superintendent Dwight Sanders will retire later this summer. He spent almost half his 26-year career in California, leading growth and development in the school and community.

Sanders, who entered business management after college, said he wanted to pursue a more meaningful career. He chose to follow his wife's lead, and become a teacher.

He became certified as an educator. Sanders said during those years he spent much of his time teaching, coaching and managing several student organizations in Cameron and Centralia.

Eventually, he found his way to California where he spent his first year working in administration.

The school board named Sanders superintendent only a year after he joined the district as the California High School principal.

He said he's able to witness students excel in different areas of their education.

"Well, kind of indirectly, you get to impact a lot of different things (as superintendent). Certainly, our priority and our focus is on our students and student academic achievement but there's so much more to it than just their academic performance," Sanders said. "We're looking at providing opportunities for students in a variety of areas. That is the thing that we focus on and want to achieve (as a district)."

Sanders said getting to work with individuals both inside and out of the district is what he enjoys the most about his job. As the superintendent, he balances working within California's elementary school, middle school and high school while also being involved in community service.

"We're serving our kids and our staff here in the district, but then (I'm) engaged in a lot of different civic groups that we provide support," Sanders said. "Seeing some of the goals of those civic groups come to fruition and seeing some of our hard work that results in an improvement in our community is rewarding as well."

Sanders said community organizatons have an expectation the superintendent will act as a figurehead for the school district.

He explained part of his role is to be out and engaged in civic groups throughout the area, including the California Area Chamber of Commerce, the California Lions Club and more. Sanders said it's through his time in these groups he could see the most influential aspect of California.

"It's got to be the community support (that stood out). I count myself extremely blessed to have had the opportunity to be here. It's just been a fantastic 12 years," Sanders said. "I also think that our students are top-notch and second to none. I always tell people that our most accomplished students are as accomplished as any you'll find anywhere...our student body is just top-to-bottom great kids that work hard and are dedicated to giving their best effort."

Sanders explained how he is proud to see students represent themselves well in the district as well as in the broader community. He said there are a lot of careers he could have taken but none as rewarding as being an educator.

Sanders said he hopes he's been able to give many opportunities to students along the way to make a difference in their lives.

His family is making sure he's occupied during his retirement.

"We've purchased an RV and (my wife and I) just want to see this beautiful country that we live in," Sanders said. "So we're going to travel and just to see the U.S. We'll be going to many of the state national parks. There's a lot of beautiful country out there and we want to be able to go see it at a leisurely pace. So the RV will give us that opportunity."

With incoming superintendent Daniel Williams taking over for the 2022-23 school year, Sanders believes the district is in good hands.

It has been a very long journey for Sanders but it is one he believes has been just as rewarding. He would like to thank the community for the relationships he developed as superintendent.

I've been blessed for them to have welcomed me into that role and allowed me to serve," Sanders said. "It's been a fantastic 12 years and I couldn't be more thankful for the graciousness of folks in welcoming us to their community."