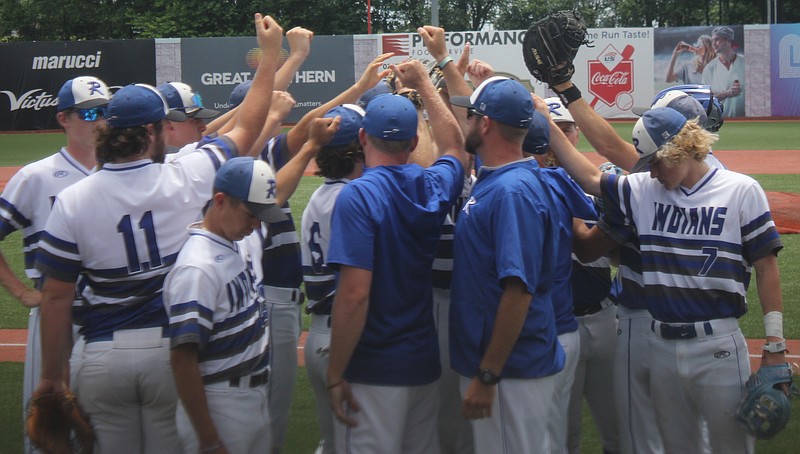 The Indians get set to play in their first ever state championship game.

It was a storybook finish to the baseball season last Tuesday for the Russellville Indians.

Logan Cinotto took center stage, pitching 6 2/3 innings and going 3-for-3 at the plate with two RBI to lead the Indians in a 5-3 victory as Russellville claimed the first state title in program history.

"Coming into this game, I had to believe in myself because I'm in the four-hole (four in the batting lineup) for a reason. I'm in the lineup for a reason," Cinotto said. "So to come in an go 3-for-3 and to drive in runs, it's just an amazing feeling. It's a feeling I'll never forget."

"Logan's performance today was absolutely special," Russellville head coach Lucas Branson said. "For him to be able to go out there and compete on the mound and at the plate is just a huge, huge performance. It just shows the toughness and the grit that he has."

Before the game, Russellville received good news when they found out Isaiah Kauffman returned to the lineup after suffering a head-on collision in the semifinal against Plattsburg. Kauffman spent a few hours in the hospital after the game and was cleared by doctors when he tested negative for a concussion. After getting two stitches above his upper lip, Kauffman was inserted into the starting lineup as the second baseman and lead off batter.

"It was a painful collision for sure. I got hit in the head pretty hard with the helmet and I cut my lip open and had to get two stitches. I did have a bloody nose too. They were afraid it was fractured. But I got cleared to play today. No concussion and I got to live out my dream," Kauffman said. "It felt amazing to start because their were so many nerves on the line. That I wasn't going to get to play my last game ever. When I was told I could, I almost started tearing up."

"It was a huge momentum swing for us," Branson said. "Obviously based on what he had to go through last night from yesterday's afternoon game to the collision. He went to ER and got checked out and was able to play today. That kind of lifted the spirits of our guys. You're on a high from winning and getting into a state championship game. Then you go to an even higher high knowing that your lead off man and second baseman is going to be able to play the next day."

Portageville ended the regular-season ranked No. 4 in Class 2 baseball and had won 17 straight games dating back to April 19. Branson had been paying attention to the teams at the top of the rankings for weeks and predicted the Indians would have to play the Bulldogs if they were going to win the title. He prediction became reality last Tuesday and Branson wouldn't have wanted it any other way.

"We really felt when the brackets were released on the MSHSAA website, we kind of had an idea of what are potential path would be coming out of districts. I had a good feeling that it would be us and Portageville in this game," Branson said. "Because I've been following the teams at the top of Class 2. I knew that they were a young team. But they're very well coached. They play the game very hard. Obviously both teams came in on a roll. By why wouldn't you want the best two teams to be playing each other in the state championship?"

Russellville added a run in the second inning. Alex Oligschlaeger led off with a double to right-center before Nolan Gartner beat out an infield single to put runners at the corners. Gartner then stole second and Oligschlaeger came home on the throw to make it 3-0.

The Bulldogs got a run back in the top of the third to make it 3-1. Russellville responded with a run on four hits in the bottom of the inning. Charlie Miller and Cinotto got the ball rolling with back-to-back singles. Two batters later, Jesse Daniel made it to first on another infield single that scored Miller from third to give Russellville a 4-1 lead.

Cinotto had a shaky fourth inning when he returned to the mound. After taking care of the lead-off batter, Cinotto allowed a one-out single, then walked two batters to lead the bases. Alex Windsor followed the walks with a 1-0 pitch single to left to score two runs to make it 4-3.

Cinotto came back strong to set down Portageville in order in the fifth and sixth innings.

Russellville picked up an insurance run in the sixth. Schulte led off the inning by hitting his second triple of the game. Two batters later, Cinotto singled to score Schule to make it 5-3.

Starting the seventh, Cinotto had thrown 97 pitches in the game after throwing 27 in relief in the semifinal. He hit a batter to start the seventh before getting a foul out. Cinotto then faced Portageville's pitcher, Trey Benthal. Benthal took the at-bat to nine pitches before hitting a line drive to left field that was caught by Russellville's Bryce Bryant for the second out.

Cinotto had hit the pitch count, so Branson brought in Daniel to get the last out and his third save of the playoffs. Daniel got a grounder to third where Miller threw the ball to first to post the final out.

Branson believed his team was able to win the state championship because of the hard work the Indians put in throughout the season and how it showed in their performance against Portageville. Russellville finished with a playoff-high 13 hits and did not commit an error in the title game

"I think our guys just made sure they had good approaches, making sure to try and swing at pitches that they felt like they could get and get a good solid barrel on it too," he said. "It's a huge credit to what we did from a pitching standpoint. We knew going into the season that our strength was going to start with what we could do on the mound. Then what we could do defensively with the level of athleticism we had. To come here and play two games, no commit any errors, and play the way we did. That's why we won."

Many of Russellville's players have played together since they were kids and they all had dreams of winning a state championship. The dream became reality and several of the players were at a loss for words after achieving their goal that was years in the making.

"It feels amazing. Right now it doesn't even feel real," Kauffman said. "I have a feeling it will kick in soon. But we accomplished so much, this team. We all used to play on the same travel team. We all had dreams of this. But it took me to my senior and we did it. I feel accomplished for sure. It's a great way to go out of high school. It's the best way."

"It's awesome. I mean, it's crazy. It's the first time we've ever played in a state championship game," Chris Seaver said. "I was a little nervous, as you would expect. I have been working really hard on my hitting before today, because I hadn't been hitting well. And it all came together."

Russellville had advanced to the baseball Final Four twice in their history in 2006 and 2018, finishing third both times.

"There's no words right now. It's going to take us a while to really let this one sink in. We've spent a lot of time invested into our program to get it to this point," Branson said. "There's so many people that need to be thanked. The players that have played for me. My coaching staff, Brian Bishop and Tyler Watkins. Going back to all the 13 years I've spent here. We've built the foundation and we kept moving this program up and to get to the pinnacle, it's awesome." 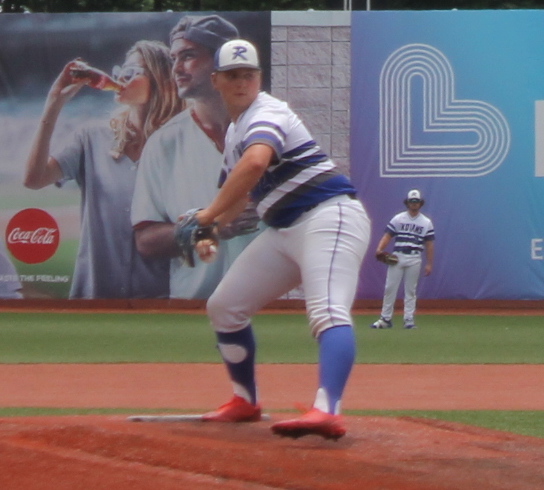 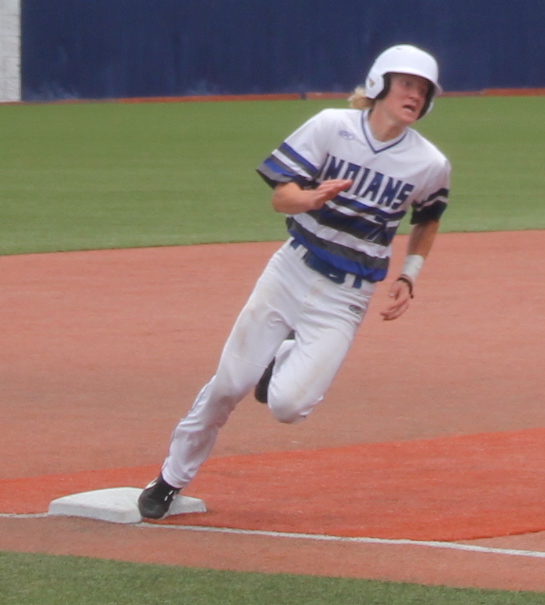 Isaiah Kauffman races for home after teammate Jake Schulte hit a triple to right field. Kauffman scored the first run of the game. 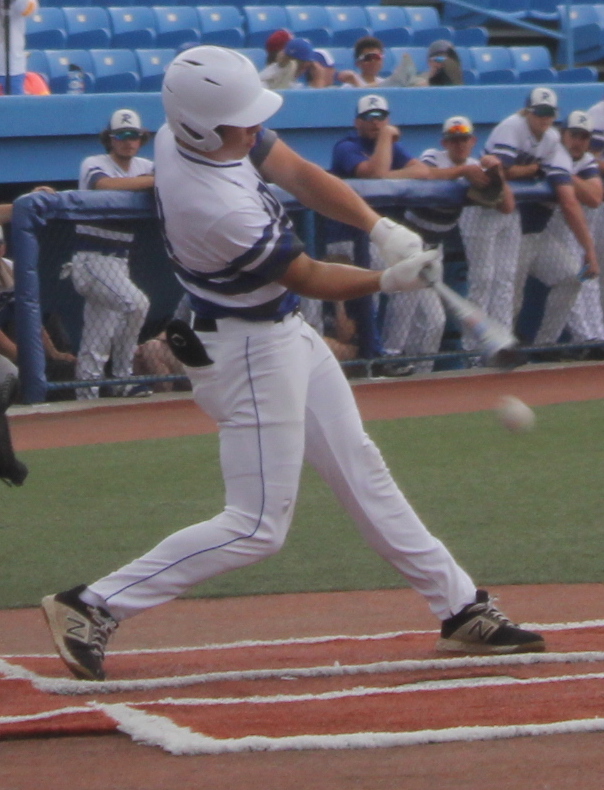 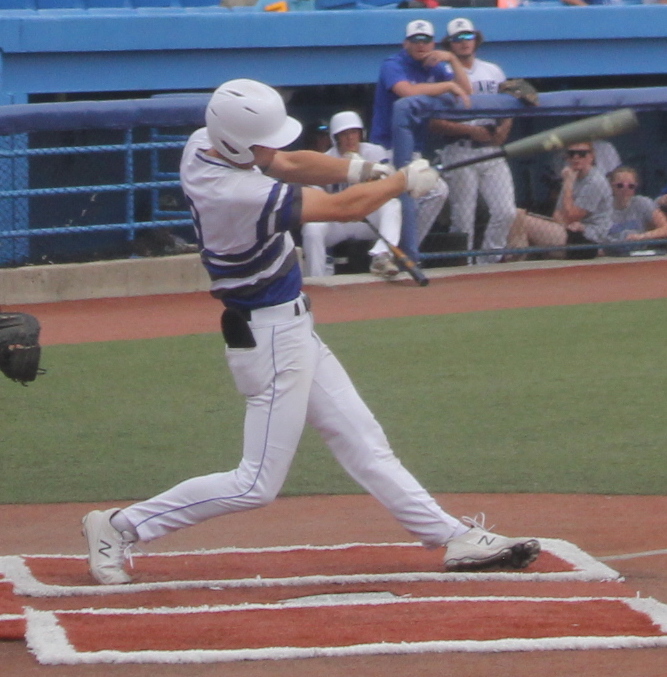 Junior Charlie Miller hits a single in the third inning. He scored later in the inning and gave Russellville a 4-1 lead. 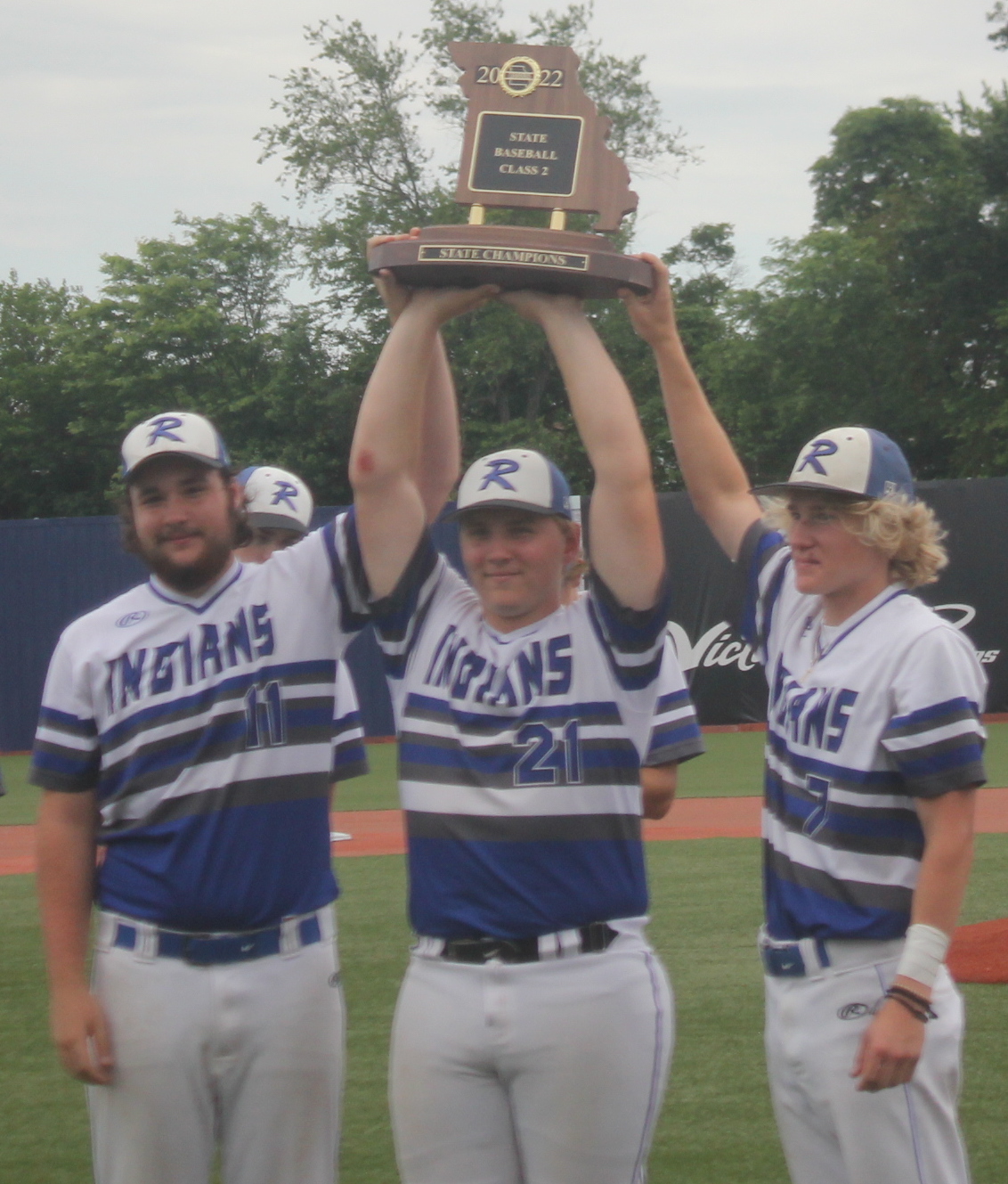 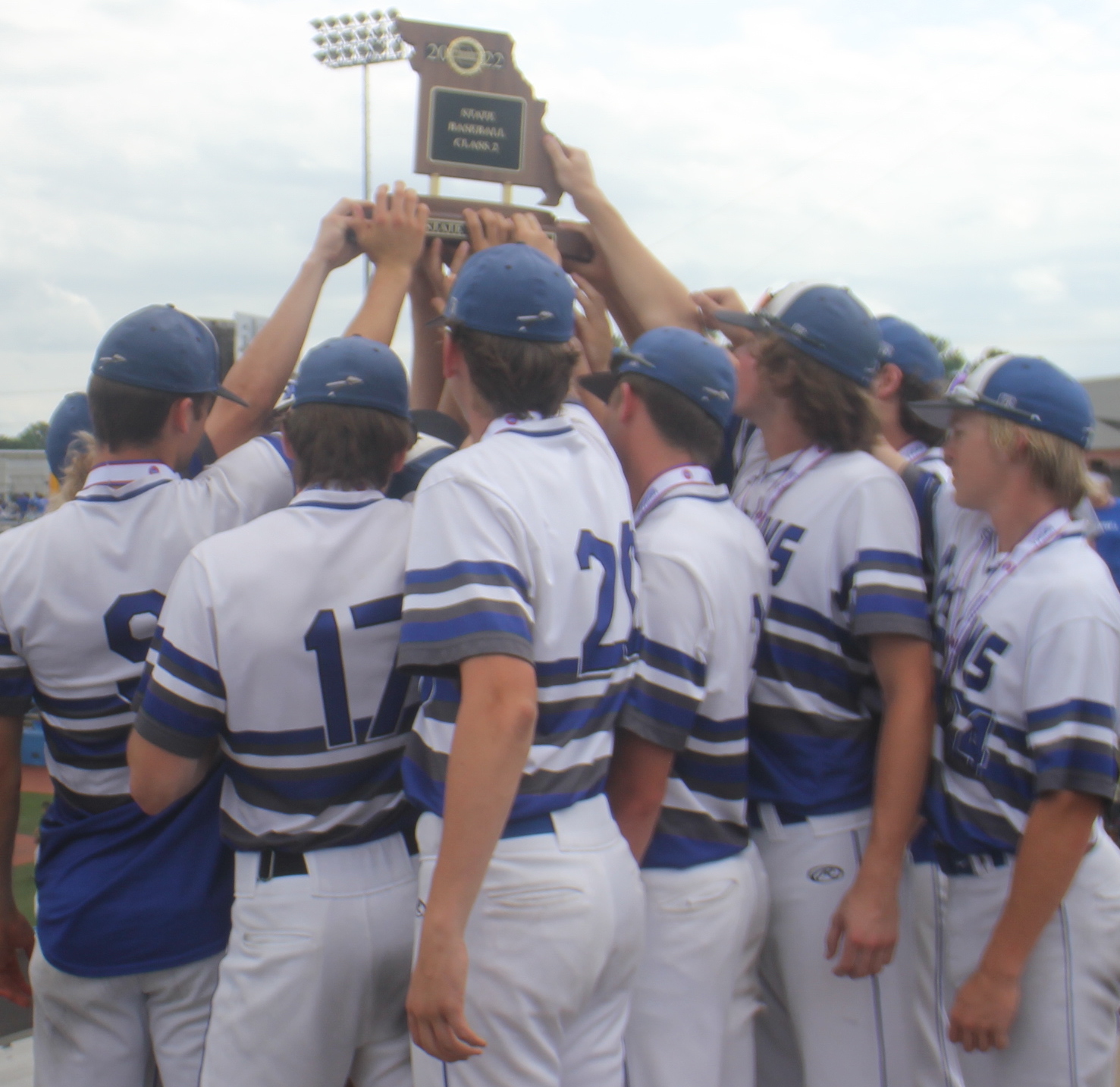 The Russellville Indians come together for one last huddle. 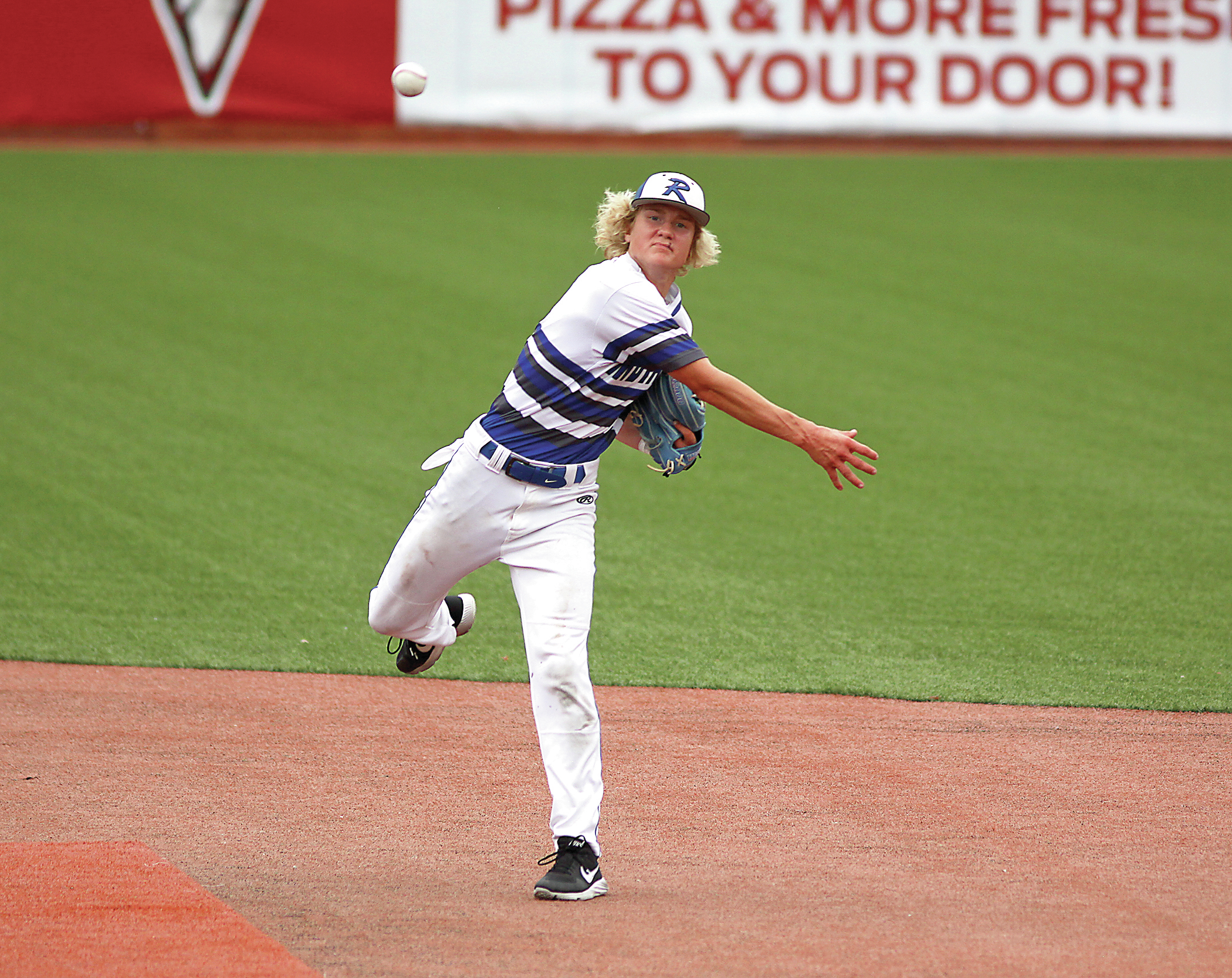 Russellville second baseman Isaiah Kauffman throws the ball to first base for an out during the sixth inning of Tuesday’s Class 2 state championship game against Portageville at U.S. Ballpark in Ozark. (Greg Jackson/News Tribune) 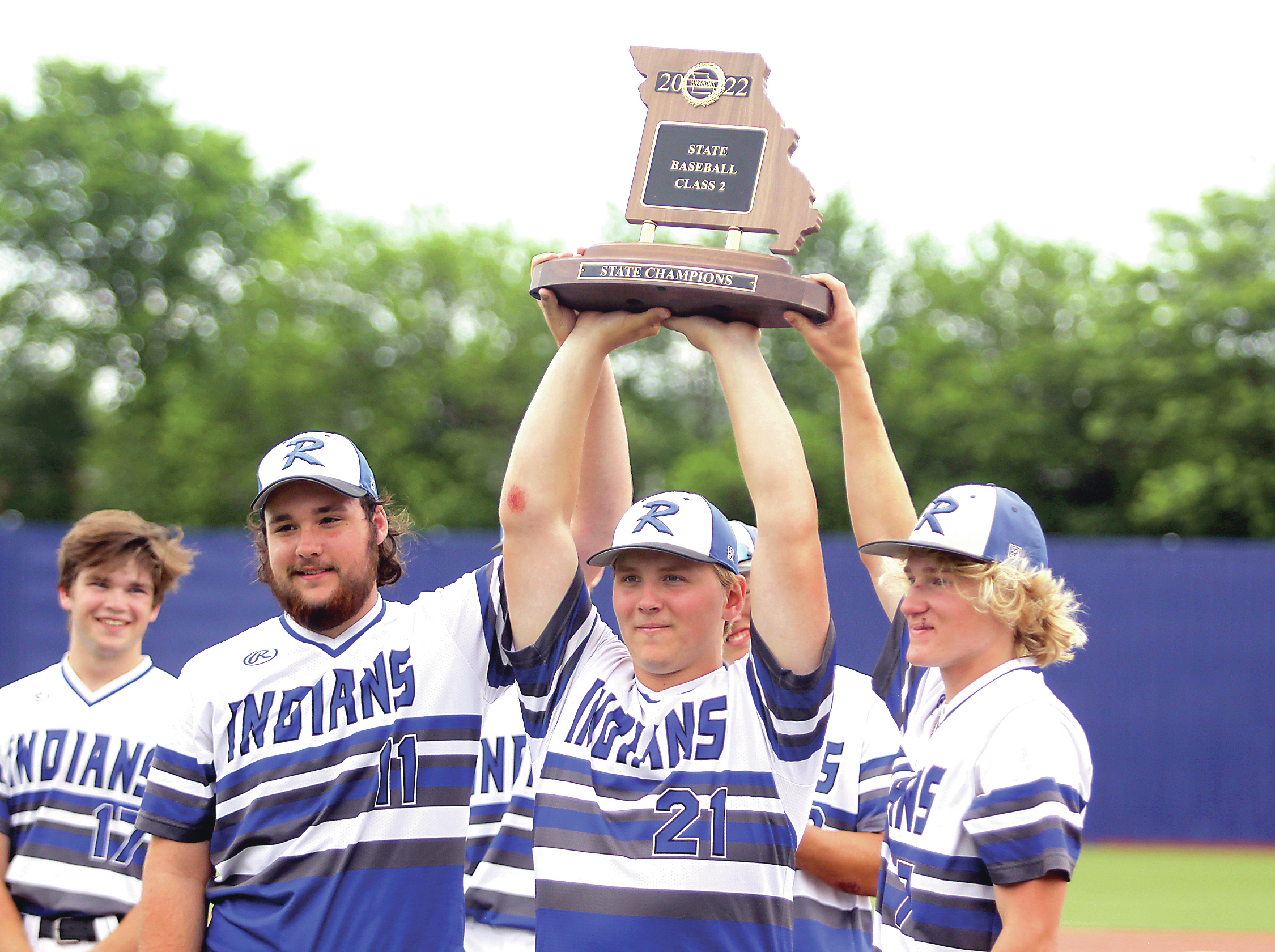 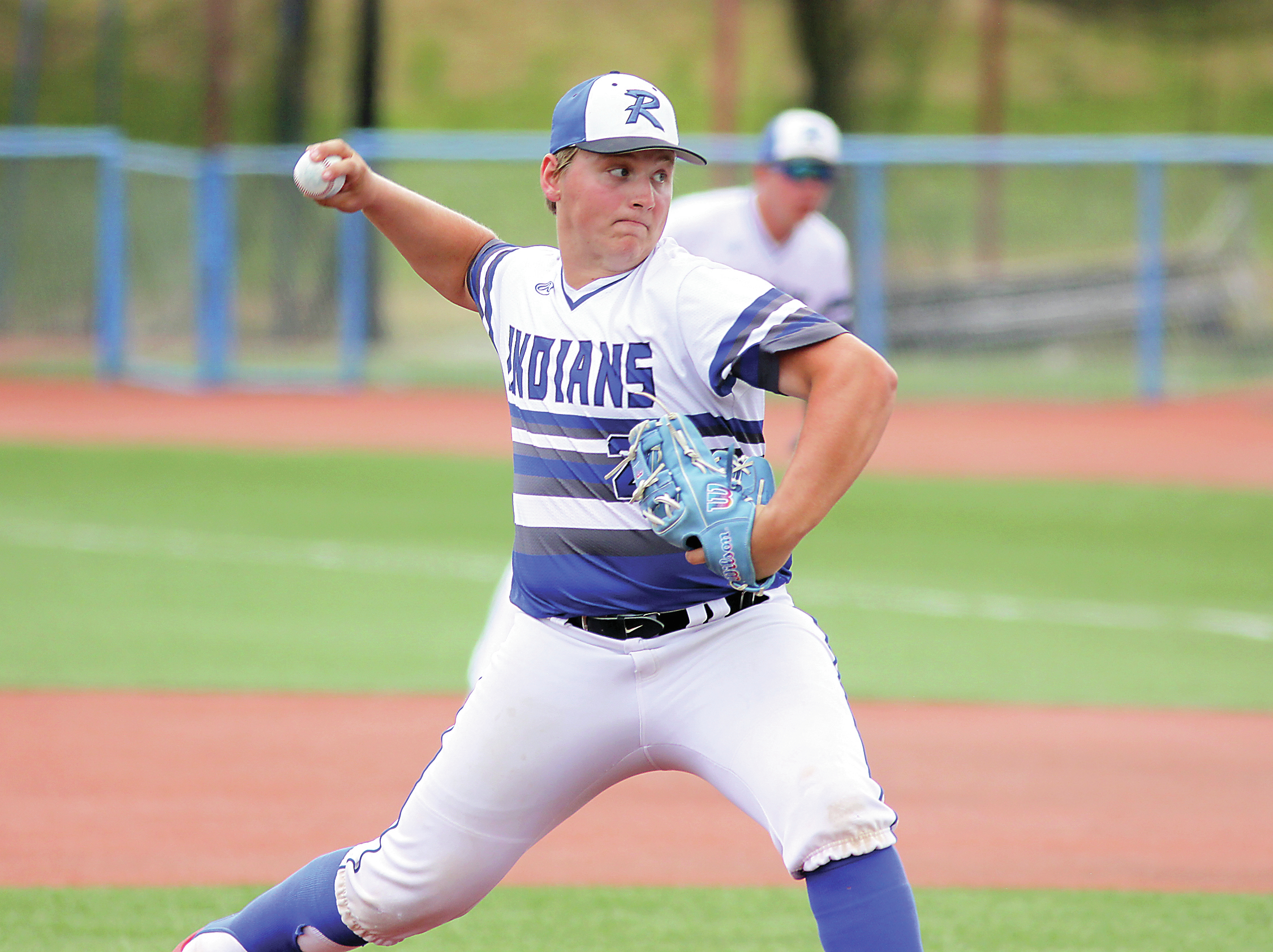 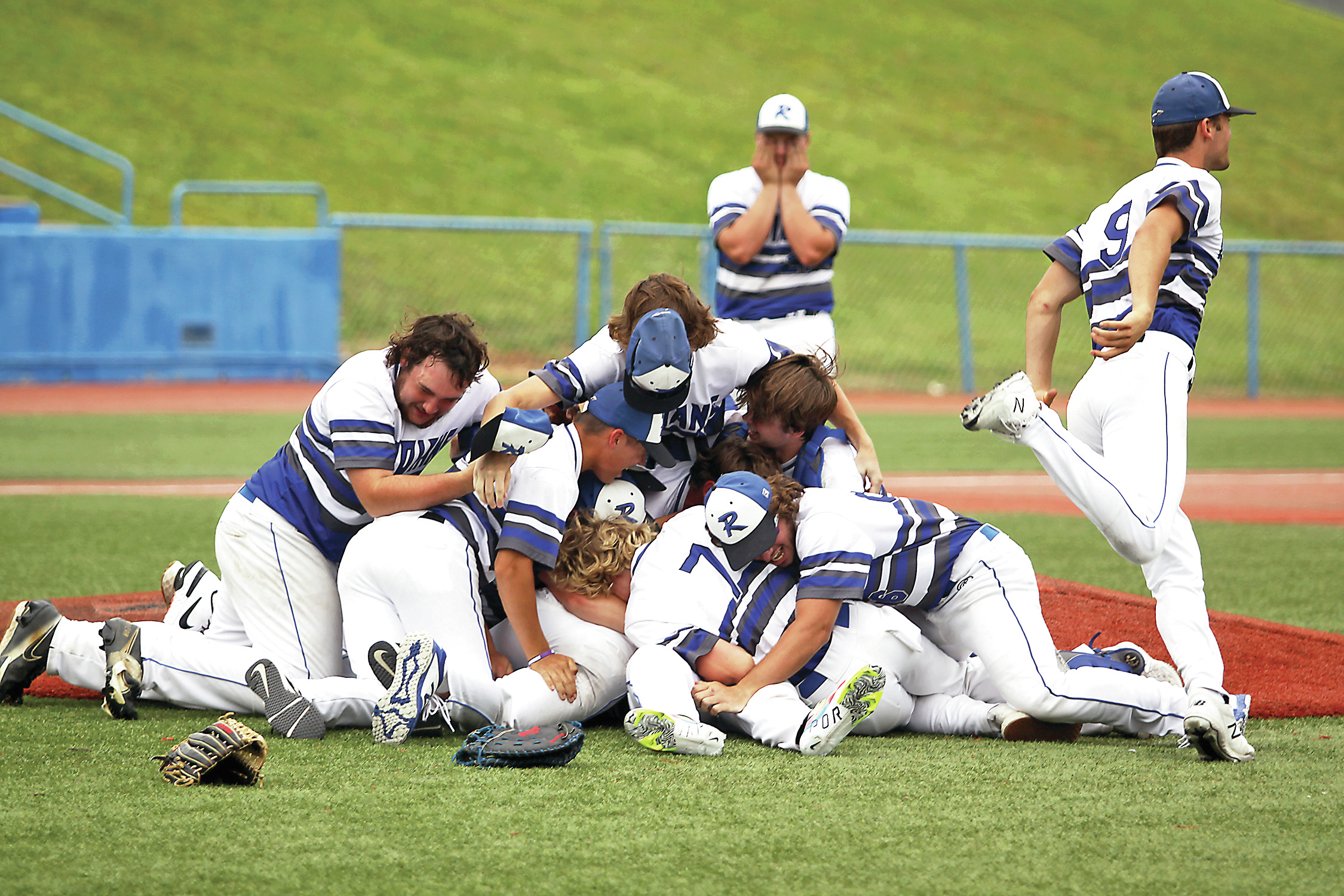 Russellville players form a dogpile near the pitcher’s mound after the final out of Tuesday’s Class 2 state championship game against Portageville at U.S. Ballpark in Ozark. (Greg Jackson/News Tribune) 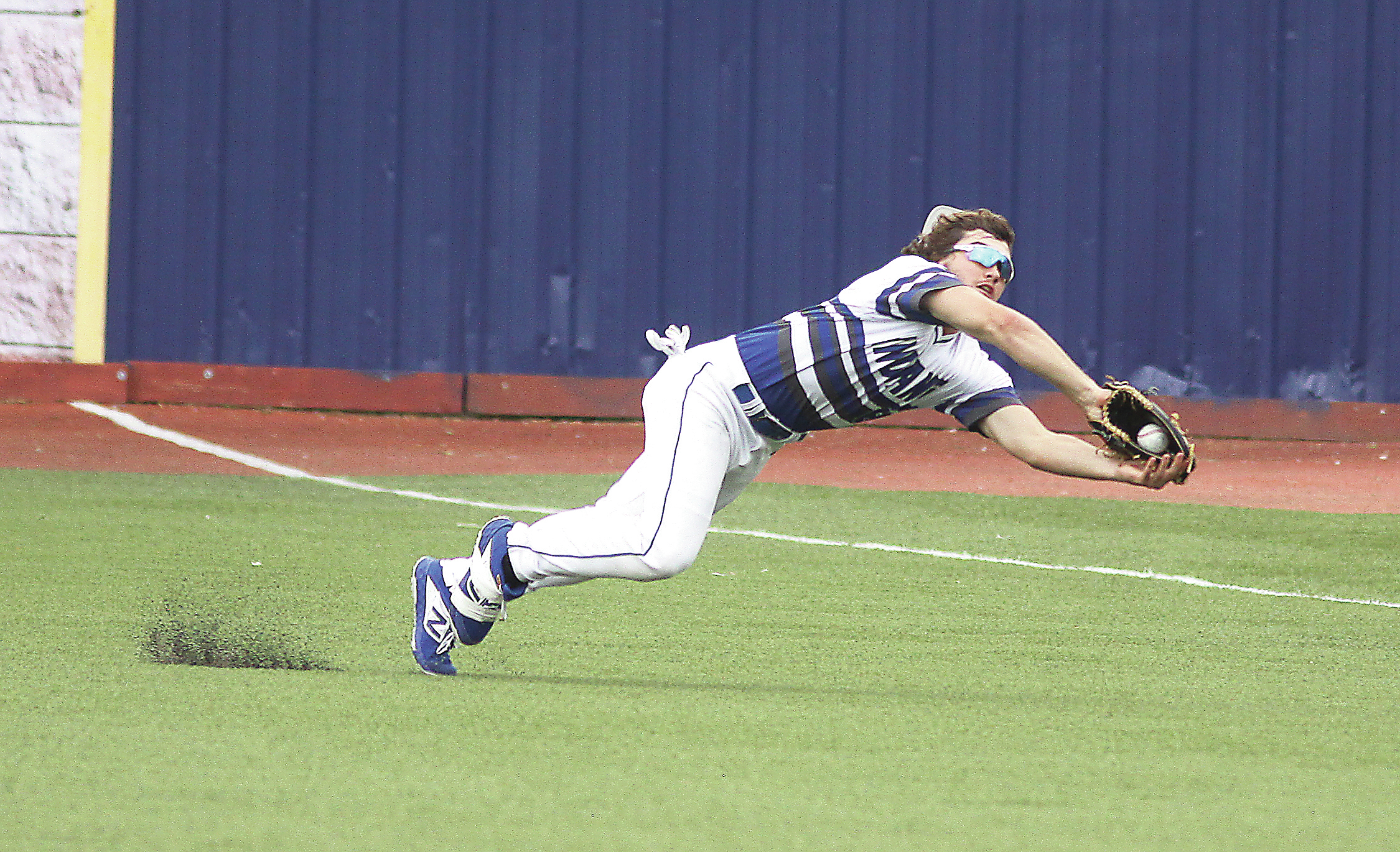