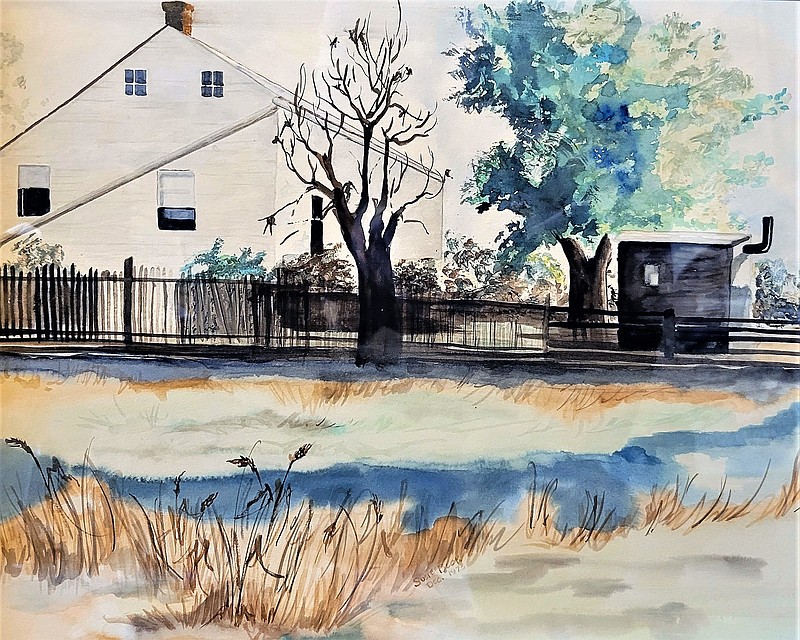 In 1973, Hermetta Beck painted a watercolor of the original house built by John Hedler around the Civil War. Originally a log cabin later covered with wood siding, the home is no longer inhabitable. (Courtesy/Garry Beck)

John Christopher Hedler, a native of Bayern, Germany, contributed to the agricultural foundation of the Midwest when immigrating to Missouri and purchasing his first expanse of farmland on April 15, 1857, according to a deed signed by President Buchanan.

This property was later acquired by the Beck family, with whom it has remained for several generations.

Much of Hedler's life in Cole County was defined by hardship since he not only toiled to build a productive farm near Honey Creek, but had to bury two stillborn daughters. In 1897, when his wife, Katherina, died, she was buried on the farm next to her daughters and Hedler moved to Jefferson City.

The Westliche Post, a German-language newspaper from St. Louis, noted the 90-year-old Hedler died because of serious injuries sustained from falling down a flight of stairs while sleepwalking Aug. 1, 1910. A Union Army veteran of the Civil War, he was laid to rest in the Jefferson City National Cemetery.

"My great-grandfather, Henry Beck, bought the farm from John Hedler some years before his death, but we are not certain when the actual sale occurred," said Garry Beck. "Similar to many family farms during that timeframe, they engaged in agricultural activities like raising livestock, row cropping and taking commodities like eggs and cream to sell in town."

The son of German immigrants, Henry Beck was born in Cole County in 1857 and was a lifelong member of Immanuel Lutheran Church in Honey Creek. In 1883, he married Leona Duenkel, and the couple raised five children, including Rilius, a son born in 1890.

"Rilius was my grandfather and he helped my great-grandfather on the farm for many years," said Garry Beck. "He married Alvina Sommerer in 1916, and they had four children -- Edna, Melinda, Edmund, who they called 'Buddy, and my father, Herman."

Beck continued, "In 1917, Rilius purchased the farm from his father. In addition to the normal farming operations, he established a couple of apple orchards and had a press he used to make cider. Rilius' father died in 1933 and his mother in 1952, and they are both buried at Immanuel Lutheran Church Cemetery."

While growing up, Garry Beck had the privilege of helping his grandfather around the farm and also listening as he shared mirthful stories about his youth, such as the way he learned to swim.

"When Rilius was a kid, he couldn't swim so a farmhand picked up him up and threw him into a pond on the property," Garry Beck recalled. "My grandfather would always chuckle when he told me that story."

Rilus' first wife, Alvina, died in 1926, and he later married Helen Mueller, with whom he had no children.

During the Great Depression, Beck said, Rilius briefly rented out the farm and went to work shoveling coal at the power plant once located west of the Capitol building in Jefferson City. He was later hired as a tower guard at the Missouri State Penitentiary.

"From what I was told by family, he was part of a burial detail for a Black inmate that died and was to be quietly buried at the penitentiary," Beck said. "Apparently, the man's family came down from either Kansas City or St. Louis and my grandfather officiated the funeral because he felt that it needed to be done."

Family lore notes that his grandfather eventually left his job as a tower guard because even though he was a crack shot with a rifle, he had no desire to ever shoot an escaping inmate.

Returning to his farm, Rilius supplemented his farm work with hunting raccoons and other small game, often traveling to Jefferson City to sell the meat. His children helped him around the farm until World War II began to unfold.

"My father, Herman, was the oldest and was drafted into the U.S. Army," Beck said. "He ended up serving as an infantry soldier in the Pacific and participated in the Battle of Leyte Gulf. In the Philippines, he was wounded and received a Purple Heart."

In the years following his wartime service, Herman married Barbara Miller. They became parents to both Garry and his sister, Hermetta. Herman worked for many years in Jefferson City, eventually retiring from Schriefer's Office Machines and Equipment. In his free time, he came to help his brother, Buddy, and their father on the farm.

Rilius died in 1980 followed by his second wife, Helen, in 1994; the couple were buried at the Lutheran church in Honey Creek. Buddy took over the lion's share of the farm duties and, until the early 1980s, lived in the log cabin built more than a century earlier by the farm's original owner, John Hedler.

Garry Beck's father, Herman, died in 1999 and his Uncle Buddy died in 2007. He and his sister inherited part of the farm from their father and were able to purchase the remaining property. The siblings are now the fourth generation of Becks to own the 178-acre farm, which proudly bears the designation of a Missouri Century Farm.

"Up into the 1960s, it was common to see farms of this size in this area that had been owned by a particular family for generations," said Garry Beck. "But it is becoming less common since many of these farms are being sold off so that subdivisions and similar things can be built."

He added, "My sister and I are the heirs of this Beck legacy, and we have no children that we can pass it to, so it may end with us. Times change, but we want to ensure that the story of this farm and those who worked to build it are remembered." 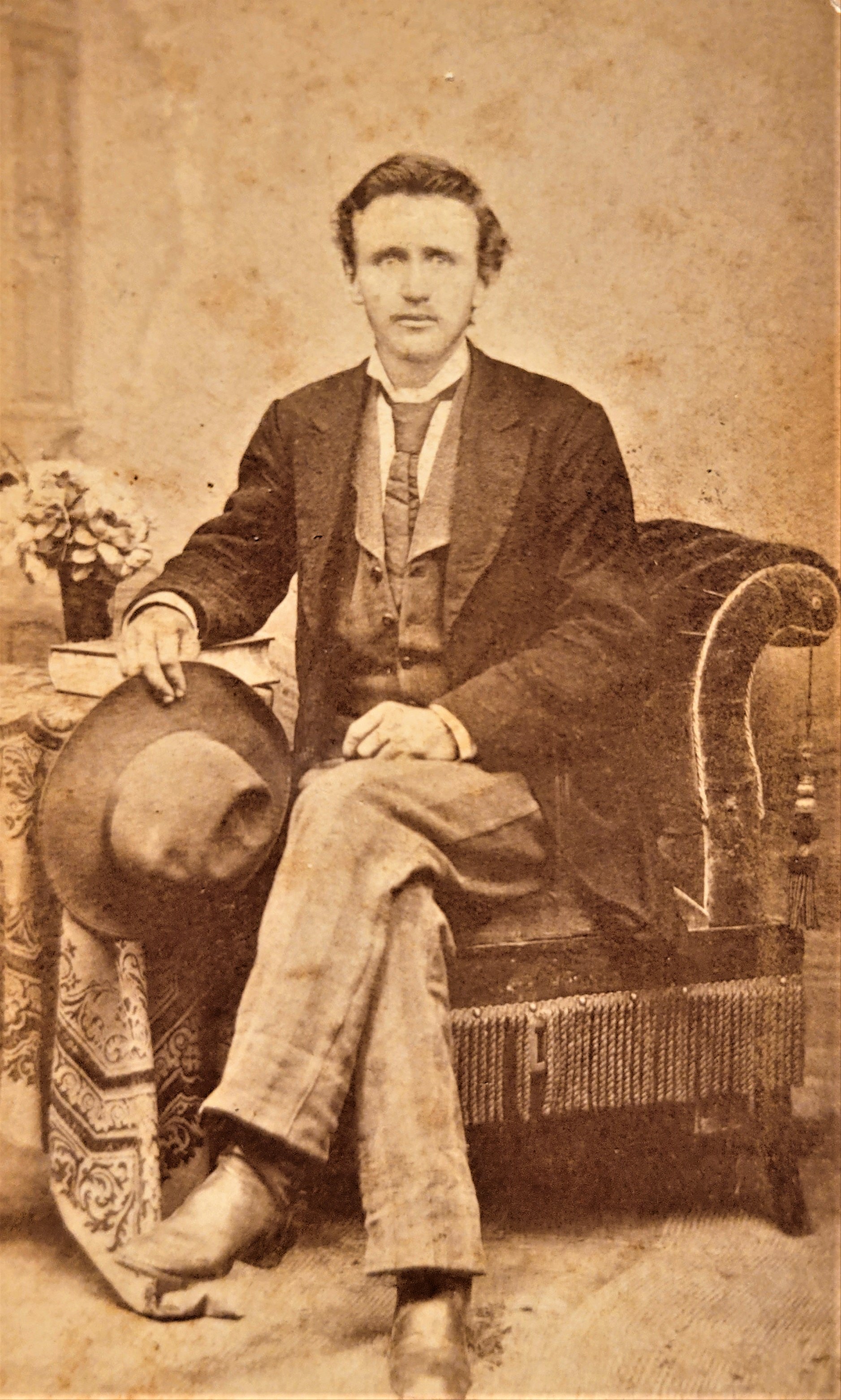