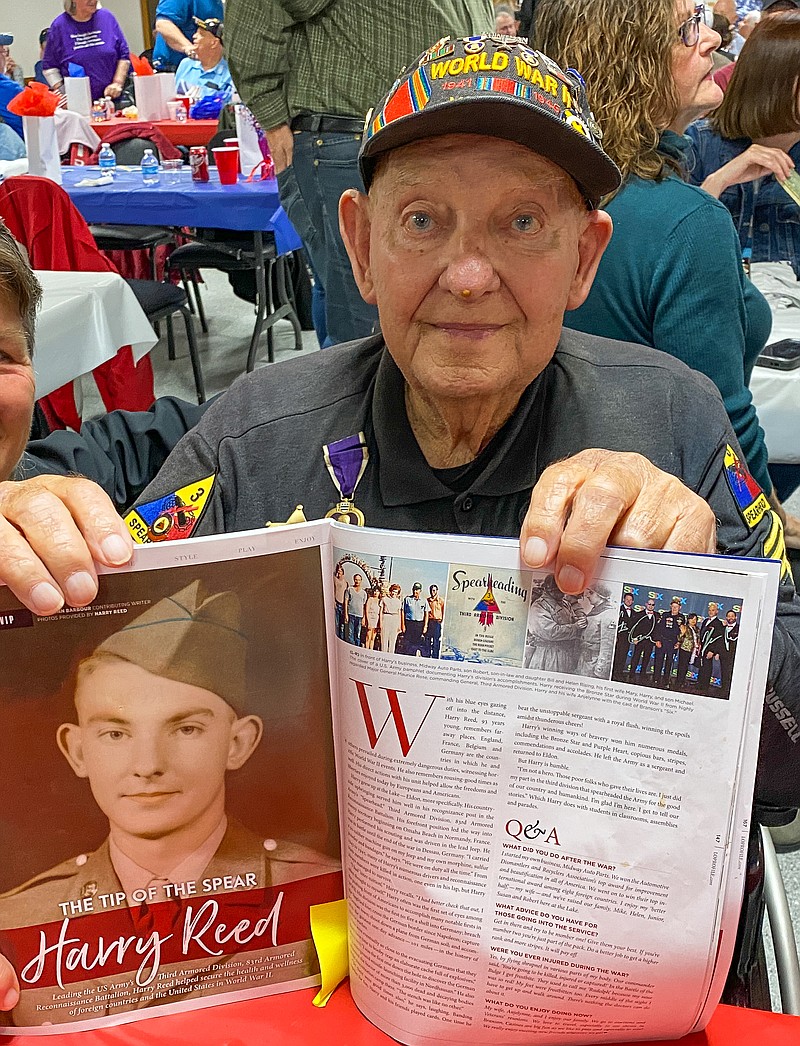 Harry Reed is shown during a Nov. 12, 2021 veterans support dinner. Reed, a native of Eldon and a World War II veteran, passed away Thursday.

A Jefferson City man who was awarded a Bronze Star for outstanding achievement and gallantry in the Battle of the Bulge has died.

Harry Reed died Thursday at the age of 98.

"An 18-year-old Harry Reed was working on his family's farm in 1942 when he received a draft notice informing him of imminent military service," wrote local author Jeremy Amick in an article for the News Tribune in August 2017. "Within the next few months, the young man would be thrust into the front-lines of a war raging in Europe and go on to earn several esteemed awards including the highest accolade bestowed by the nation of France, the Legion of Honor."

Last November, Reed told the News Tribune about how he landed on Omaha Beach in Normandy.

"I wasn't the first one," Reed said. "We sat out in the channel there, until they cleared it out."

He said Germans had massive spikes in the beach that prevented landing craft from making it all the way in. Reed was part of the spearhead that struck into Germany.

"I was in charge of a squad. At the Battle of the Bulge, I lost about all of them," Reed said. "It was about 20 below, and snow knee deep, and Germans everywhere."

A Purple Heart recipient, Reed said he was injured in one eye, on an arm and on his legs.

"It was all through the war. Every little bit -- I got wounded," he explained.

The year after the war's end, Reed was married and went on to raise five children. In later years, he operated a salvage and recycling company in addition to building two subdivisions in the Eldon area.

"The days of seeing members of the Greatest Generation in parades and attending events like Operation Bugle Boy will soon be something of the past," said Amick, who has written several books on the service of local veterans. "Fortunately, these brave heroes like Harry Reed have taken the time to share their stories and reveal through their experiences the true costs of freedom.

"All accolades he has received throughout the years are fully deserved and are a reminder that we can never repay the debt of freedom provided by through the blood and sweat of Harry and his comrades."

Visitation for Reed will be held Wednesday from 10 a.m. to noon at Phillips Funeral Home in Eldon. The funeral service will be held at noon. Memorials are suggested to the Mid-Mo Honor Flight.