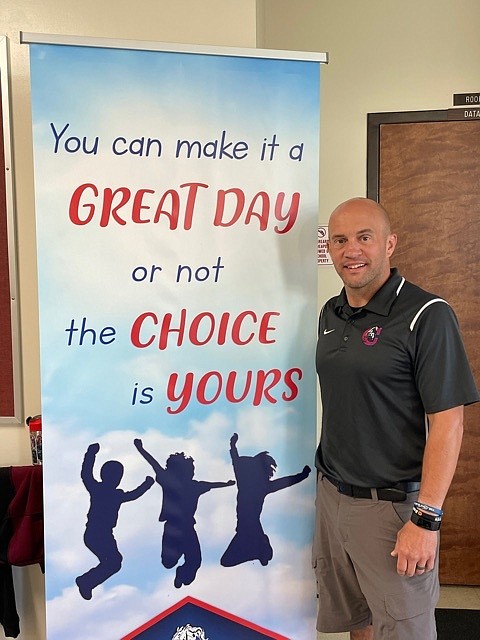 New opportunities can be bittersweet, especially when it means saying "goodbye."

California Elementary School Principal Gary Baker will be leaving the school district at the end of June for a position in Boonville. He said he is excited for the new opportunity, but he will always be thankful for the community support he received as elementary school principal.

Baker said he knew wanted to go into education from a young age. As a high school student, he made the decision to go into the field and later would receive his degree at Central Methodist University. He went on to teach for a year in Bunceton, 10 years in Boonville and 10 years in California.

During his career, he taught from pre-K to 12th-grade subjects such as physical education, health, special services, math and literature, credit recovery and even handled in-school suspension.

"There's just something about the entire process (of education) that hasn't been work," Baker told the Democrat. "My granny always said, 'Find something that you love, and you won't work a day in your life.' I've worked in factories, I've been a farmer, and all kinds of stuff, and (education) never feels like work. It's just been something I love. So it's been a joy to be a part of it."

He said the California R-1 School District is smaller than others, but it feels much larger due to community support.

"The biggest thing is the love and support of the community, I mean you just can't beat it," Baker said. "We have been one of the top 30 largest elementary schools in the state of Missouri, but the feel of it is a very small school. This supportive community ... anything that we need this community provides. The connectivity and the family feel of the staff, it's pretty awesome."

Baker said the district was designed to be a "professional learning community," which means everybody is engaged in the decision-making process. Parents, staff and faculty have a say in how schools move forward. He said it is a very community-driven process with an emphasis in communication.

"That whole process just aligns with my beliefs," Baker said. "There's not one person doing everything and everybody's involved and that has been amazing to see, just how cohesive the staff are. There's educational experts all throughout (the elementary school) building. I've learned so much from the teachers ... we have so many resources here. We are so blessed with everything to help our kids have the most conducive educational experience.

Baker is impressed with all the subjects students are engaged in. From lessons in English language arts to more advanced concepts in STEM (science, technology, engineering and math) and agriculture, he said the district is growing the community's future with a solid foundation."

With an ACT average of 23 and above, the high school students' success starts at the elementary, Baker said. He said it's rewarding watching students graduate and receive accolades from their colleges, trade schools and jobs because he knows from where the foundation for their skills came.

Baker will be returning to Boonville as the school district's athletic director. He said the position grants him a job closer to home as he and his wife prepare for a new baby boy arriving in September.

"This new opportunity is bittersweet because everything about this community, I feel like it is 100 percent, to my core, my beliefs," Baker said. "I have been so supportive and so thankful for everything this community has done, not only for me as an educator but personally. This is family."

When Baker told his staff of the change, he said this is only goodbye for now. He emphasized you never know where the roads are going to bring you. However, he said, the elementary and the school district are ripe for the next step.