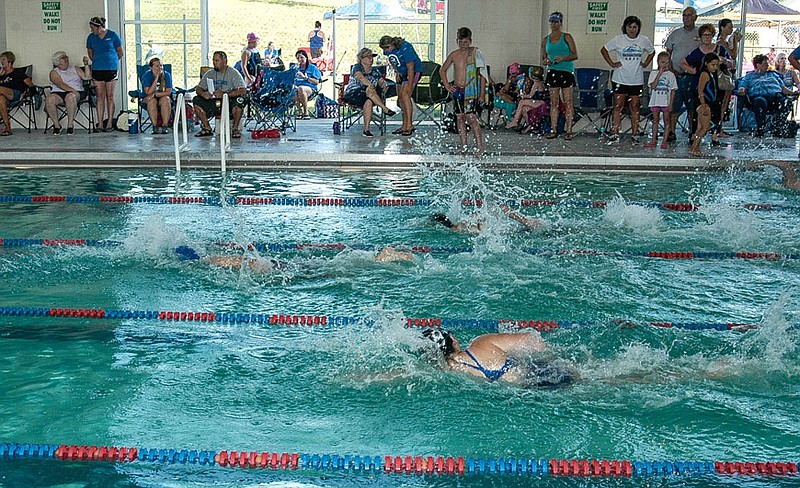 Swimmers race in mixed relays during the competition with three other teams June 28, 2017 at the California municipal pool.

Old plans can require a lot of new discussion.

The California Pool Committee held its first meeting June 15 to discuss the feasibility of a new outdoor pool in the area. Residents advocating for the pool came to show their support, resulting in a passionate discussion about how the city would be able implement the project.

During the Board of Aldermen's previous meeting, members received news that the Missouri Department of Natural Resources approved a $500,000 pool grant for the city. But, inflation has ballooned costs for the project from $1.7 million to $3 million in the 18 months since the city applied for the grant.

Weighing the cost of how much funding it would take to build the pool took up most of the conversation. The outdoor pool would be built as a waterpark for the city. It would include features such as multiple lanes for water sports, tube slides, sprinklers and a shallow end for children to play.

The new pool would bring in visitors to California, create an area for swim meets and establish a place for local families to bring their children during the summer, proponents have said. The main issue for residents and committee members during the meeting is how to establish all these elements while keeping materials in budget for the city.

The initial plan for the pool included six lanes for swimming competitions. The price for swimming lanes are currently set at $100,000-$150,000 per lane and a slide for the project would cost about $250,000.

Conflict arose during the discussion after residents found committee members seemed hesitant to move forward with the project, citing the new increased expenses. Locals such as former Mayor Norris Gerhart suggested potentially cutting the price of the pool down to make it more feasible for the city.

Committee members and residents discussed a possible sales tax for construction, but those at the meeting agreed it was not a viable option.

Ultimately, the committee tasked members and Leslie Scheidt, Parks and Recreation director, with approaching three separate pool building companies for a rate on the project. Scheidt will report back to the committee with how much it would cost to create the outdoor pool, and the Board of Aldermen will vote on whether to move forward with construction.

Scheidt has two companies she will be reaching out to for the project, Westport Pools and KC Gunite. She said she is searching for a third company for assessment of the project.