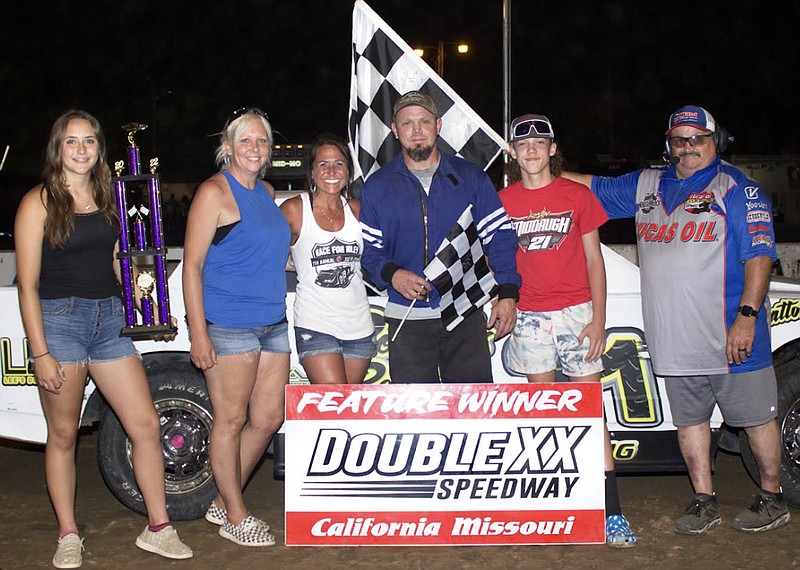 Over the past 33 summers, Father's Day at Double X Speedway has become a tradition for many. An enjoyable evening with friends and family, watching dirt track racing at the local quarter mile. Father's Day 2022 saw a Winged Sprint Car Special with a $2,000 winners share up for grabs. Street Stocks and Pure Stocks were also in competition for the evenings racing action.

Pure Stocks took to the track for the opening events of the evening. Two heat races were contested to set the feature lineup for their main event. Heat number one saw Darin Porter pick up the victory. Cameron Kelly ran a strong second challenging Porter until a lap seven spin in turn one sent Kelly to the rear. Porter prevailed after a green, white, checker dash to the finish. Justin McDowell finished in the runner up spot, Preston McDowell placed third and Kelly settled for fourth. Heat two saw Windsor driver Rodger Deatherage claiming the win after a race long battle with Bradley McDowell who would finish second. Cory Flamm came in a close third and Russell Beach completed the field.

In the Street Stock division, a duo of heat races were contested. Victorious in the first heat was Mark Davis in his first visit to Double X in a while. Dale Berry ran a strong second, John Clancy finished third and Jody Romig completed the running order. Heat race number two was claimed by Joe Miller in the #409. Tyler Crocker finished second and Shane Gillmore was third. Dusty See was credited with fourth.

The Pure Stock class was the first feature on tap and saw heat race winners Darin Porter and Rodger Deatherage leading the field to the green flag. Porter would lead lap one with the field lining out behind him. The hardest fought battle was for the two through five spots race long with several drivers making bids for these positions. At the completion of the twelve lap feature it was Darin Porter taking victory with Justin McDowell earning second, Preston McDowell making a late race bid for third, Cameron Kelly fourth and Rodger Deatherage fifth. Cory Flamm was sixth, Bradley McDowell seventh and Russell Beach in eighth.

In the Street Stock feature, Mark Davis and Joe Miller made up the front row. On the drop of the green the leaders charged through turns one and two side be side but a quick caution for the spinning Shane Gillmore would reset the lineup. It took three tries to get a start but once we were underway the top four cars set themselves under a blanket at the front of the field. Davis would lead with Miller and then Dale Berry both having a turn in the runner up spot. John Clancy would move into third with Miller slipping back to fourth before a lap nine caution for Gillmore would bring the filed to single file behind the leader. Davis would continue to lead with Berry and Clancy on the bottom. Coming to the checkered Berry would make one last run at the leader in the top of turns three and four but it would not prove to be fruitful as Davis would prevail. Berry would hold on for second over John Clancy in third and Joe Miller in fourth. Tyler Crocker would finish fifth with Jody Romig sixth, Dusty See seventh and Shane Gillmore eighth.

For the $2,000 to win, Winged Sprint Car feature young guns Chase Porter and Jack Wagner would be leading the parade to the green flag. Twenty-five laps of battle would decide the victor. Point leader Taylor Walton would suffer a mechanical problem on the line up lap and would not be able to compete in the feature event. Jack Wagner would take the quick lead in the JHR #77 with California's Tyler Blank giving chase. Wagner was super smooth on the bottom groove while Blank was rolling the top shelf on a technical track. Behind the leaders, Samuel Wagner was running a comfortable third with Chase Porter settled into fourth and Garrett Hulsey in fifth. As the leaders would encounter lapped cars it was like a game of checkers to see who would move where. With Wagner committed to the bottom and Blank continually hammering the top groove the laps wound down, the leader was able to use a lapped car to gain an advantage and take the victory. Blank would finish a hard charging second, Samuel Wagner finished a strong third, Chase Porter would come home fourth and Garrett Hulsey completing the top five. Tyler Elliott would lead the second five in sixth, Broc Elliott in seventh, Austin O'Neal in eighth, Jake Griffin ninth and Mackenzie Borchers in 10th. Russell Potter was 11th in the running order.

Next Sunday night will feature the lone Late Model appearance at Double X for 2022 with the running of the Jason Russell Memorial race. Last year Aurora driver Justin Wells claimed the victory in the event. Be sure to join us for an evening of racing action and remembering and honoring a talented driver who ran many laps at Double X in the early years of his career. Be sure to follow the Double X Speedway Fan Page on Facebook, text "XX" to 1-888-294-5521 for updates and important information about Double X Speedway. 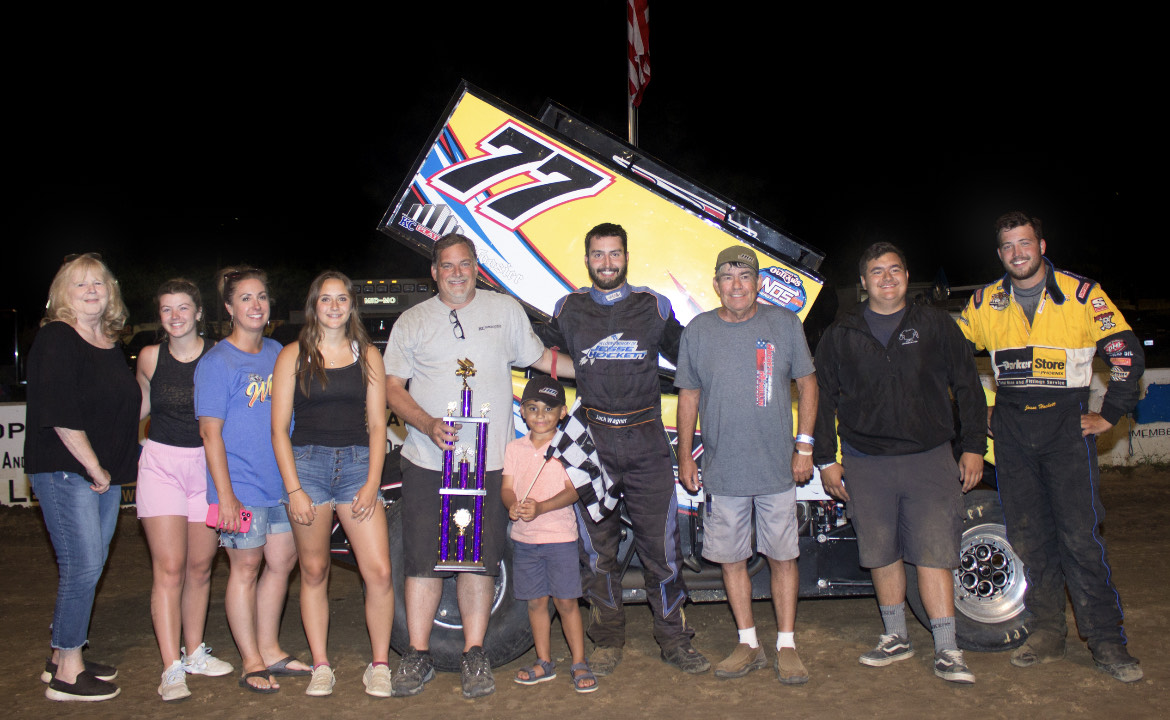 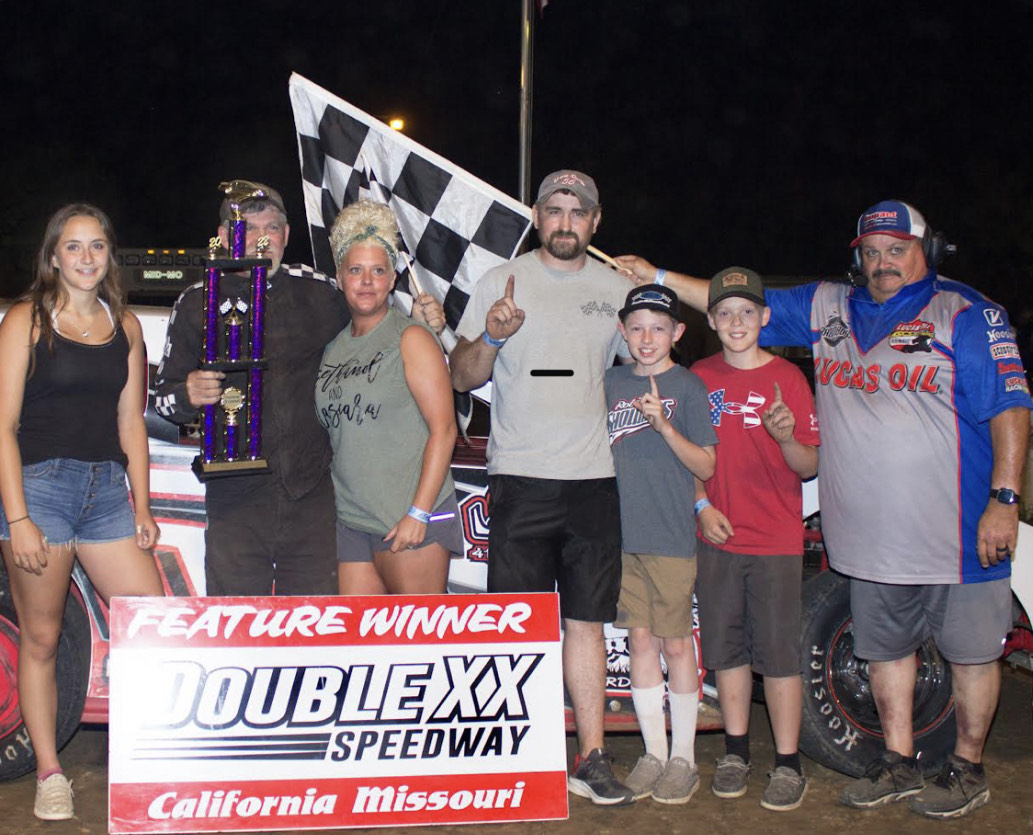 Mark Davis of Grovespring accepts his Super Stock feature trophy from Ellye Messerli of California assisted by Brad Stuedle who was Director of Competition for the 2022 Father's Day event. (Submitted photo)