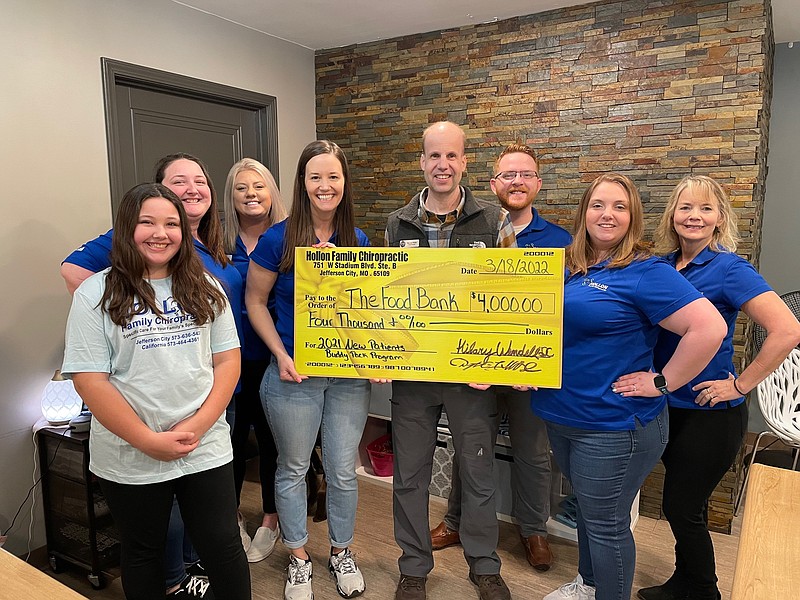 A California chiropractor donated thousands of dollars to the Food Bank.

According to owner Hilary Hollon, new patients received a $20 rate for their first appointment. Funds will be collected over the year and given to a charity of the business' choosing.

Using funds from its "New Patient Process," Hollon Family Chiropractic presented a $4,000 check to Food Bank Regional Manager Darren White. He said the money donated will be placed into a program for school children. Funds will be used to buy bags of food for children and their families to have during time away from school.

"These funds will go through the Food Bank's Buddy Pack program, which we'll use specifically for Moniteau County," White said. "We cover 32 counties. Every county that we raise funds in goes to help that particular county, so this will definitely support that program locally."

White said his organization needs donations from businesses and potential partners to maintain its many programs. He said the Food Bank appreciates its partnership with Hollon Family Chiropractic.

Hollon said this is the California office's third year contributing to local charities. This idea came from a greater campaign known as the "Give Back Movement," which operates nationally.

"There's many offices across the country that are doing this right now through a group called, 'Integrity Doctors.' It sort of stemmed from their idea, but we took it locally and tried to find different charities or groups that needed money," Hollon said. "One that was brought to us was the Buddy Pack program. We see a lot of teachers, and a lot of school-aged kids and stuff like that, so we decided to partner with them."

She explained the Food Bank isn't the only organization her business works with. Before opening doors to patients in California, its Jefferson City office partnered with the Special Learning Center. Hollon said over the past few years, the business has given "tens of thousands of dollars" to benefit the organization in the form of money, equipment and security needs.

"I would say if (someone has) any events coming up or if they themselves are like a group that's looking to raise money, definitely contact us," Hollon said. "That's something that we do. We try to find those partnerships throughout the community."