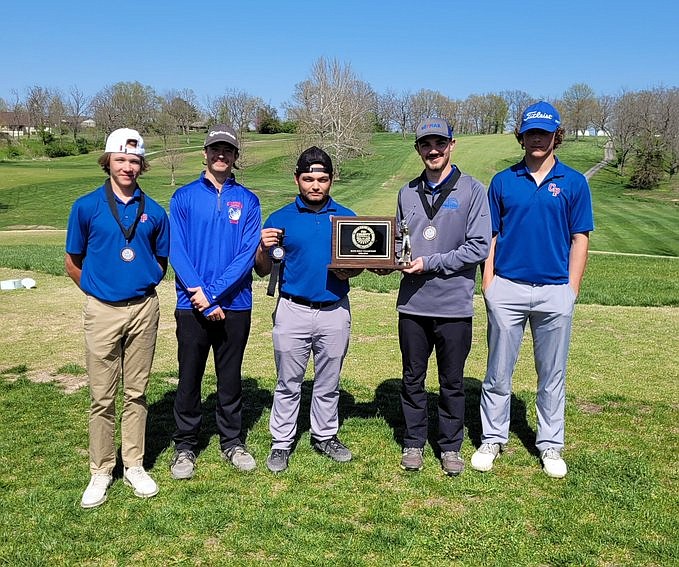 The California boys golf team climbed the mountain and reached the summit last Tuesday in the Tri-County Conference Championship at the Eldon Golf Club.

California was the only school in the Tri-County Conference with three all-conference individuals, as sophomore Will Boyd, freshman Ayden Howard, and senior Enoch Dunnaway each finished in the top 10.

Head coach Lance Boyd felt his team was nervous going into the tournament because of what was at stake, but California found a way to hold back the nerves when it counted and take the conference title.

"Despite the team not having their collective 'A' game, they still battled for the victory," Boyd said. "They are learning how to score even when they don't have their best day. We need some improvement in controlling nerves and remaining calm are a continuous battle. This game is very difficult, and remaining calm when adversity strikes is key to putting a solid round together."

Boyd said Eldon's golf course was a difficult course to play on, with hole No. 3 being the toughest, a hole that was a par-3, 174 yards over water. Because the players were hitting the ball into the wind, many shots fell short and ended up in the water and caused several players to lose strokes.

The Pintos had to change their game play to grind through holes like the third and try to get as many pars and birdies as they could.

"The boys were very happy to take home the trophy in the Tri-County Conference Tournament," Boyd said. "It ended up being more of a grind than they anticipated, but they got the job done."

California will now get its prepared for the postseason later this month.