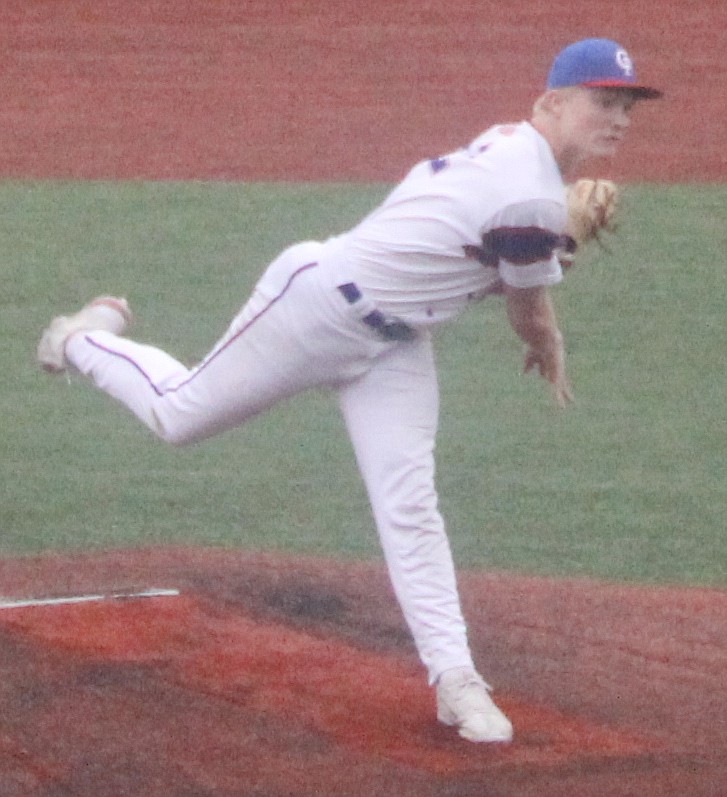 Junior Ian Peterson shut down the Panthers with 10 strikeouts in four innings on 75 pitches on Thursday night. (Photo by Evan Holmes)

It was a festive atmosphere last Thursday night as the California Pintos celebrated their Senior Night against the Knob Noster Panthers.

For the first five innings, the game was a pitching battle between California's Ian Peterson and Knob Noster's Eric Bennett-Wade. Peterson, who had injured his ankle only a few weeks earlier, put the pain of his injury behind him and pitched a gem by collecting 10 strikeouts on 75 pitches in four innings to lead the Pintos to a 3-2 victory.

"Ian was a horse on the mound and we pushed his pitches up and got him to about 75 today," California coach Steven Stock said. "They didn't do much against him."

But while Peterson was doing his job, Bennett-Wade was also having a strong pitching performance himself and both pitchers traded scoreless innings. Even when Peterson was taken out of the game in the fifth inning and replaced by Hunter Berendzen, Berendzen continue the string of scoreless innings up until the bottom of the sixth inning.

In the bottom of the sixth, Calen Kruger hit a single to lead off the inning. Stock then opted to use Cameron Combs to step in as a courtesy runner. Two batters later, Combs reached third and Ethan Bloch stepped up to the plate. Bloch singled to left-center field and scored Combs to give the Pintos a 1-0 lead.

California was now three outs away from a Senior Day win. Knob Noster opened the inning with a single and then a walk off Berendzen. Then with two outs and two runners on, sophomore Gentry hit a fly ball to right field that went over the head of right-fielder Will Edwards that scored both runs and gave the Panthers a 2-1 lead.

Now the tables had turned, it was Knob Noster who was three outs away from a win. California was down to their last out and the bases empty when Drake Schlup stepped up to the plate. With the count 2-0, Schlup took a fastball to right-center field for a triple to five California a chance. Knob Noster gave them help by walking the next three Pintos batters and Schlup walked home from third and tied the game at 2. Just when California thought they had given the game away, it was now heading for extra innings.

"We said that the biggest thing was when you come up to the last inning and your up one, and your facing anyone, let alone seven, eight, and nine, and they haven't done anything, you've got to make them hit the ball," Stock said. "We hit a kid and then we turn around, got an out, and then we walked a kid. Then you turn it over to the top of the lineup and you're asking for trouble. But to our credit, we got out of it with the score even after seven. Then once we got past their our number one. The kids just put some good at-bats, made them throw strikes, which they struggled with and it allowed us to score."

California got out of the eighth inning with the tie still intact and force the Panthers to leave two runners on base. With a chance to win in the bottom of the eighth, California once again got help from Knob Noster when the Pintos got a single and two walks to load the bases with two out. The Panthers made a bold and slightly risky move by changing pitchers with the winning run just 90 feet away. Kruger was up to bat for the Pintos and the at-bat went all the way to a full count of 3-2 with two outs. The ensuing pitch hit Kruger on the forearm and California walked-off Knob Noster on a hit by pitch. The win improved California's record to 15-6 with one regular-season game remaining. It was also the Pintos third walk-off win of the season and the second on a hit by pitch.

"We told the kids after the game that we went out and took the game away from them. We thought we had it in the bottom of the sixth. Then we turned around and gave it right back to them. Then what a big hit Drake had. We're down two outs and our last two strikes. He hits a triple and allows us to score that run. So we took one, gave one, and took one back. We took the game from them," Stock said. "We're going with our best to Southern Boone and if Ian is on the mound and throws the ball like he's capable, we'll compete with Southern Boone. Hopefully late in the game, we'll be able to score one more run than they do."

After they play their regular season finale Tuesday at Southern Boone, the Pintos will prepare themselves for the Class 4 District 9 Tournament in Versailles. They will play at 4 p.m. Monday against either Buffalo or School of the Osage. 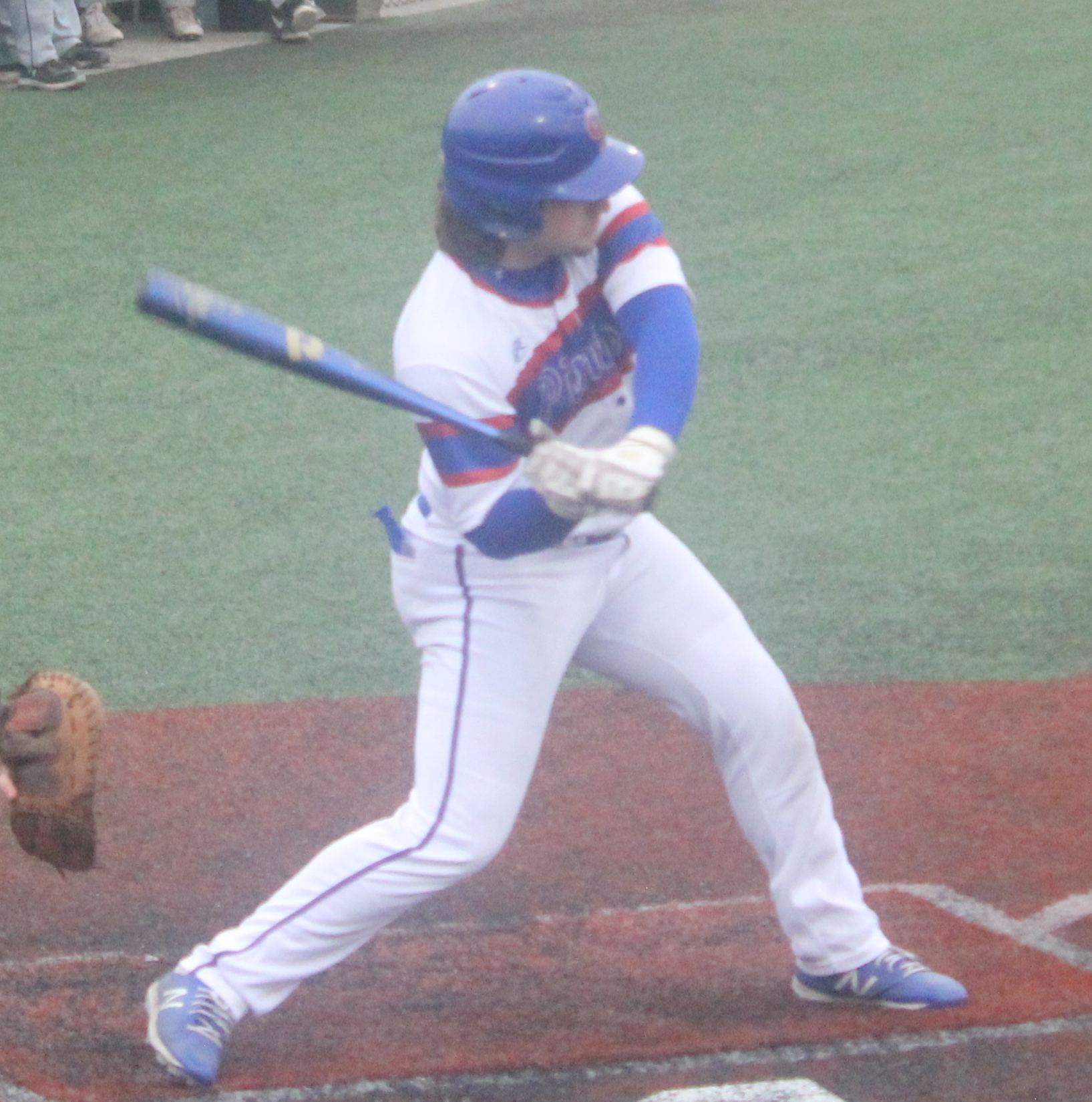 Senior Ethan Bloch gives the Pintos a 1-0 lead in the bottom of the sixth with a RBI single to left field. (Photo by Evan Holmes) 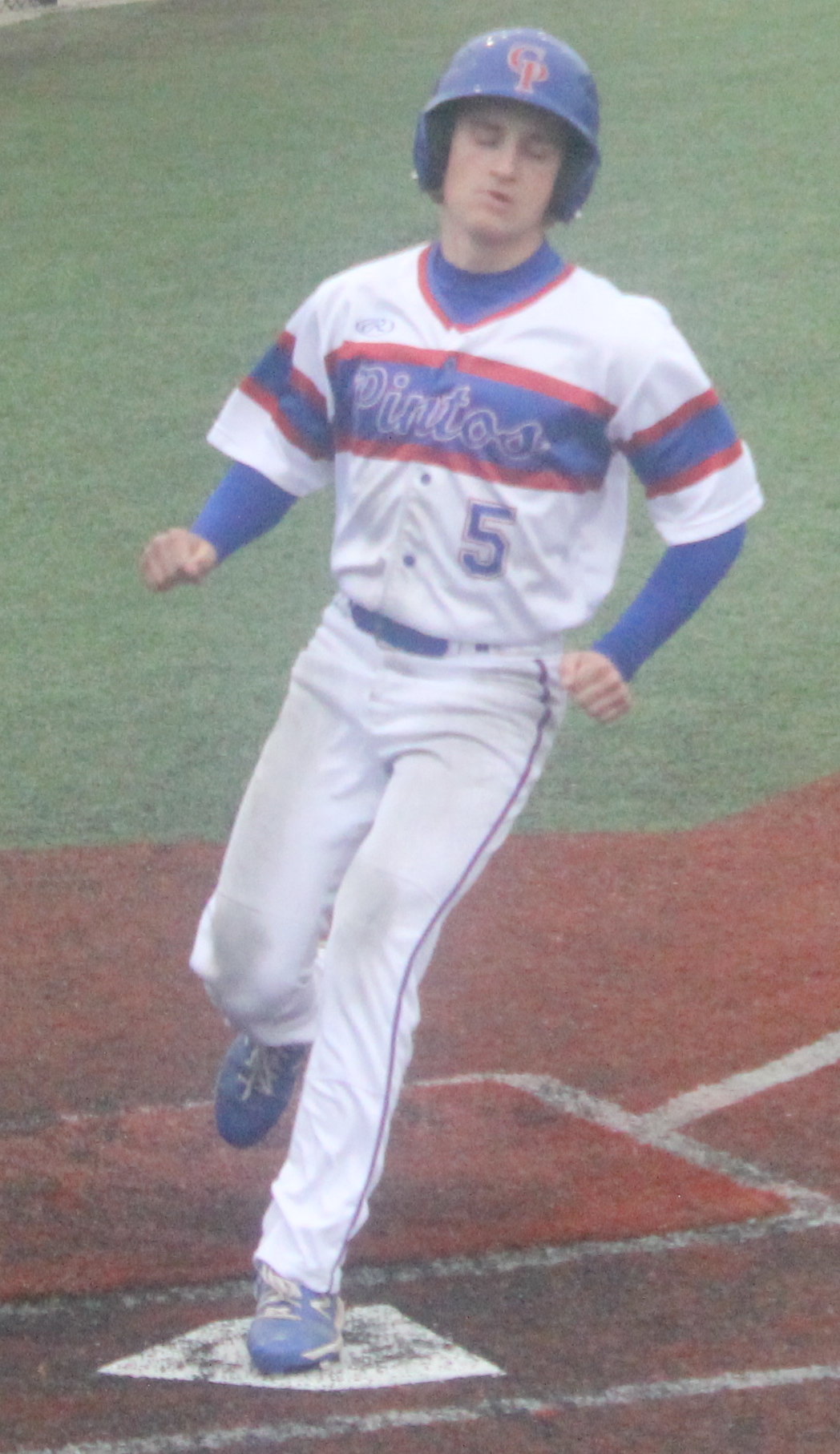 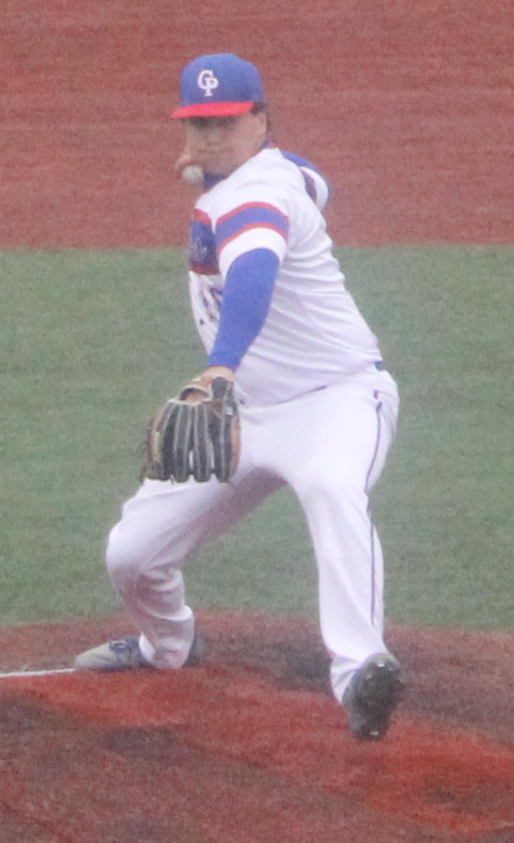 Junior Hunter Berendzen took over for California in the fifth inning on struck out five batters in three innings. (Photo by Evan Holmes) 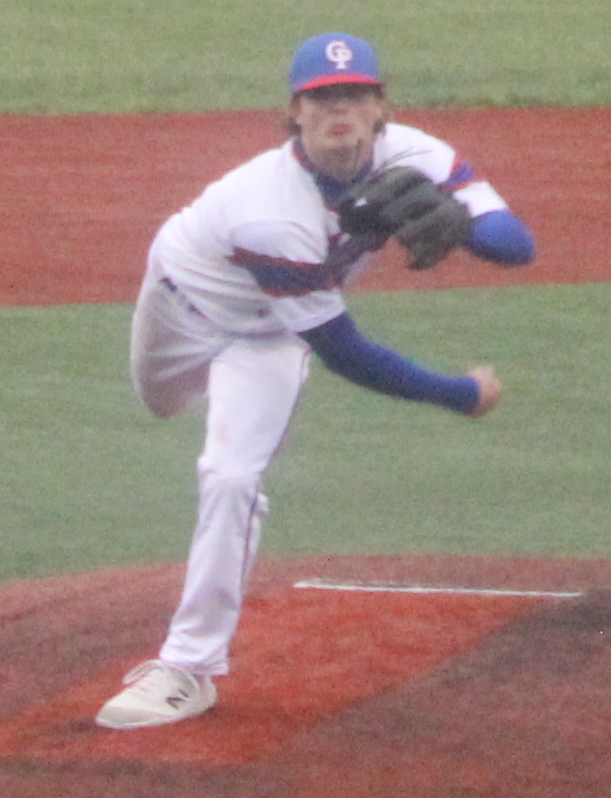 Senior Calen Kruger got the win for the Pintos against Knob Noster. (Photo by Evan Holmes) 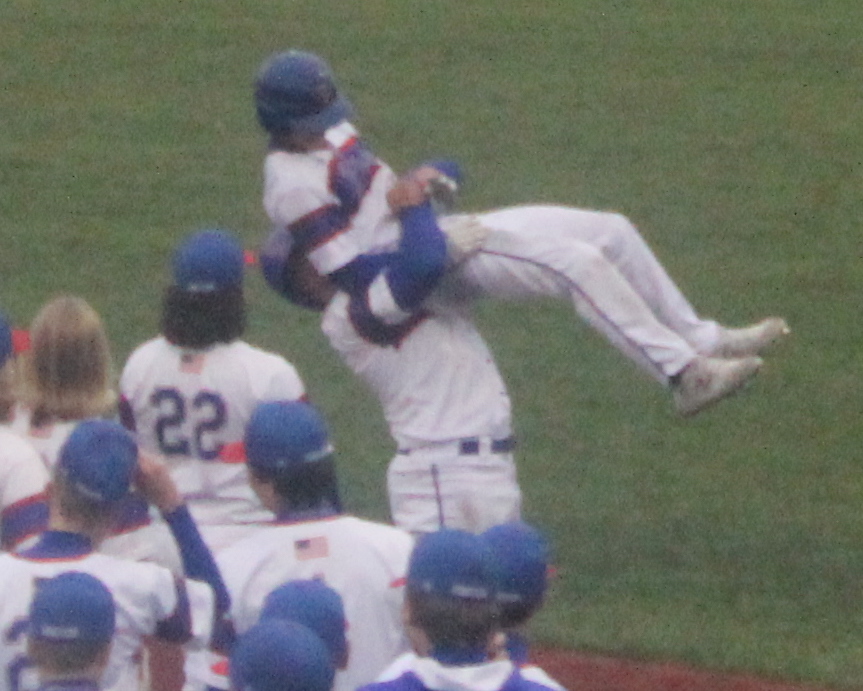 Junior Hunter Berendzen lifts up teammate senior Calen Kruger in celebration after the latter wins the game for the Pintos on a walk-off hit by pitch in the eighth inning. (Photo by Evan Holmes)