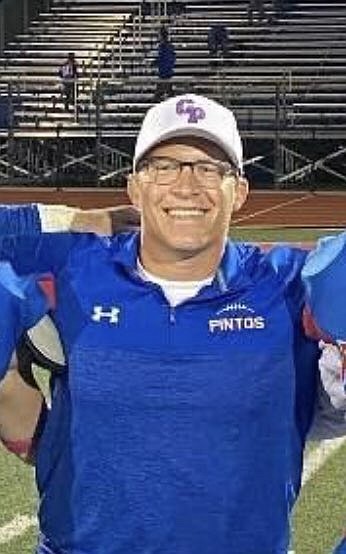 On April 14, California High School made an announcement there would be a change in leadership in Pintos wrestling.

Heimann graduated from Moberly High School in 2016 and decided to go back to his alma mater to coach. He became an assistant coach for Moberly's wrestling and football team for three years and the baseball team for two years. Heimann said he got the inspiration to become a high school coach from his father, who was an assistant coach for Moberly's wrestling for more than 2o years.

During his time at Moberly, Heimann helped coach five children to nine state medals and a fourth-place finish at the 2019 state championships.

After the 2020-21 school year, Heimann and his wife, Andie, moved to Jefferson City and landed teaching and coaching positions at California High School. Heimann will continue to be the wide receiver coach for Pintos football. But he feels both honored and humbled to be the new head coach of California wrestling.

"It feels great. Being a head coach was never really my goal as a coach though," Heimann said. "I always felt like down the road, that might be something I would be interested in, but things changed and I felt like I was ready to lead a program now and here we are. I am excited to continue to build this program and reach new heights that have never been done here at CHS. Coach Payne is moving to a new school to become the head football coach at that school. He's a great guy and coach and is going to do great at his new school."

Heimann claims that although he doesn't have much expertise as a head coach of a wrestling team, he believes that he can teach the Pintos how to handle themselves in big moments and handle themselves mentally on the mat.

"I think the big thing is wrestling experience," Heimann said. "I have only been coaching for a few years, but I have been around the sport and wrestled since I could walk. Being able to explain certain wrestling situations and positions during practice because I have been in them myself, is important in the sport of wrestling. Not to mention, the nerves of a wrestling match or walking out of the tunnel at the state tournament are crazy and being able to understand what the wrestlers are feeling and being able to help them stay focused and perform is something that is vital in a coaching staff.

"The sport of wrestling is hard and the practices and training kids to be great is hard. Knowing what that feels like and how the kids feel in late January into February is something that coaches have to understand in order to keep their kids in the best possible position to succeed."

The 2022-23 season is still months away for Heimann and the Pintos, but California's wrestlers will be very busy this offseason. Getting themselves prepared for the long road ahead of them next winter under their new head coach. Heimann has multiple goals that he wants his team to achieve next year and it all starts with a strong commitment to wrestling and consistency among every wrestler. Heimann believes may be one of California's challenges, but it can be done.

"My biggest goal right now for the 2022-2023 season is to get kids involved in the sport," Heimann said. "We can't be a program without them. Another goal is to fill a line-up. As much as this is an individual sport, it is still a team sport. There are 14 weight classes on a varsity team. In order to compete in duals versus other teams, we have to have 10-14 kids at 14 weights. It gives us a better chance to win duals when our team has a full or near full line-up. I would also like to see us get our first State Medalist this coming year. It would be CHS's first ever wrestling state medalist. I think these goals are very attainable.

"As for long term program goals down the road, I just want us to be consistent -- consistent in how we do things and consistent in how we wrestle," he continued. "If we do that, our outcomes will follow suit. Some years are better than others, but the key is being consistent. Great programs don't have 3 good years and then stink for 12 years. They are consistently good or great year after year and that's what I am hoping California Pintos wrestling can be."