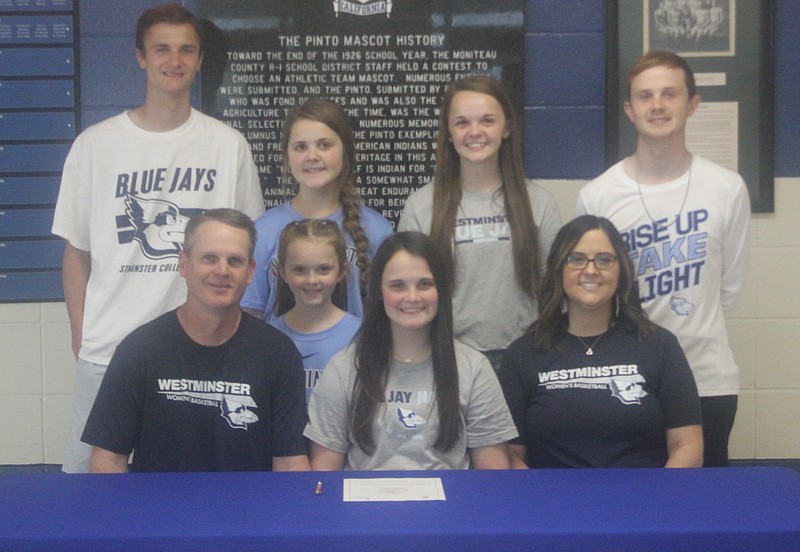 Trishelle Porter (front center) with her parents and five siblings on Monday afternoon during her commitment signing at California High School. (Photo by Evan Holmes)

It was a special day Monday at California High School when Lady Pintos basketball star Trishelle Porter signed her letter of commitment to Westminster College.

The fourth out of six children to Doug and Melanie Porter, Porter comes from a basketball family and her older sister, Tristan, played for the Lady Pintos on their 2018 state runner-up team. Porter made her announcement about her commitment to Westminster on her Twitter page last month. She will playing with her sister, who also announced her commitment to Westminster one week later.

Porter had family, friends, teammates, and coaches by her side as she signed her commitment letter. She is the first Lady Pinto to sign a commitment letter to play collegiate basketball. During her senior year at California, Porter broke her career-high points in a game twice by scoring 27 points against Eldon on Jan. 6 and 33 points against Versailles on Feb. 7. Porter also played an instrumental part of helping the Lady Pintos win the Class 4 District 10 championship by beating Springfield Catholic in the semifinals and then Fair Grove in the finals in overtime.

The Porters considered playing college basketball together for either Westminster or Iowa Wesleyan. But they decided to join the Westminster Lady Blue Jays because of the easy commute from California, and they also felt that the direction the Lady Blue Jays were taking would be a good fit for them.

The Porters will hit the court for the first time as college basketball players for Westminster this November.