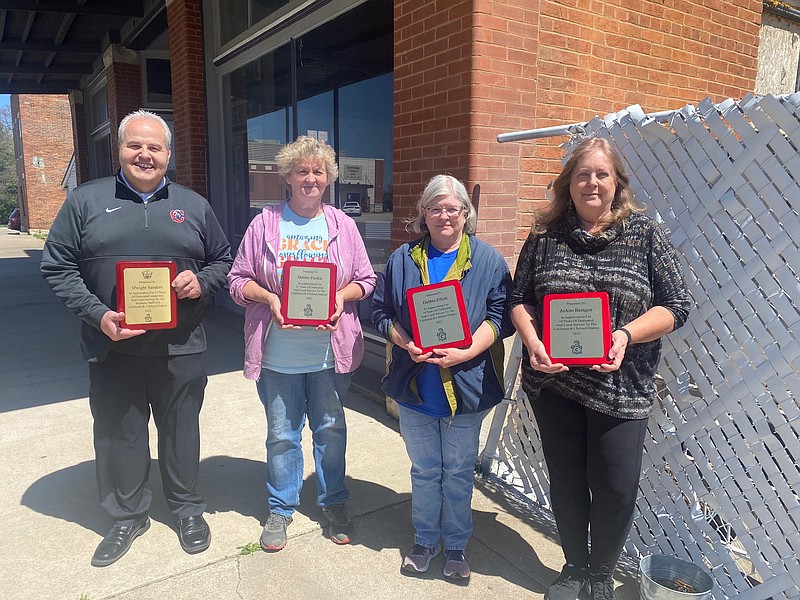 California R-1 School employees who are retiring at the end of the 2021-22 school year, from left, are Dwight Sanders, Debbie Pardoe, Debbie Elliott and Jo Ann Bestgen.

The California R-I School District recently held its Employee Appreciation Luncheon at the Sweet Chipotle Event Center. A luncheon was served to honor faculty, staff and board members.

Superintendent Dwight Sanders recognized the 2021-22 school board members. Board president Derek VanLoo thanked the faculty and staff for their dedication to the students of Moniteau County. Board members Ryan Porter, Brandy Brockes, Paul Bloch and Landon Porter helped with the reception. Mr. Sanders recognized Jeremy Burger for his three years of service to the school board.

The board recognized the following employees for their service to the school district as well as the 2021-22 academic year:

CTA President Julia Potter created a slideshow to highlight the district's employees. The presentation was shown during the Appreciation Luncheon.

The 2022 California R-1 Employee Appreciation Reception ended with Mr. Dwight Sanders thanking employees and board members for their support of the school district.