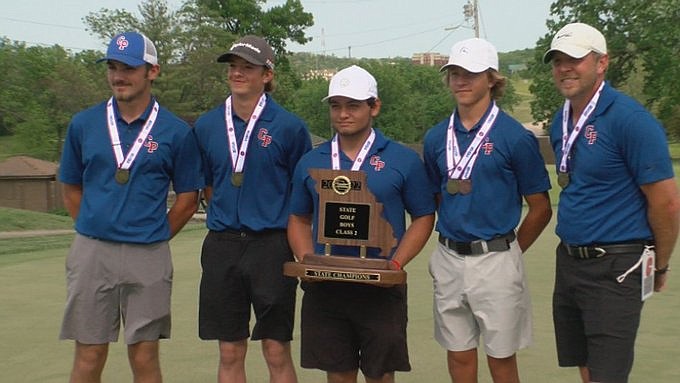 The California High School Boys Golf team won the 2022 Class 2 State Championship in Columbia on Monday with a combined score of 671. (Photo by California School District)

California has a state championship.

The Pintos had four members of their team -- William Boyd, Enoch Dunnaway, Ayden Howard and Jackson Hackett -- qualify for state to win the first state title in the history of the program. Boyd finished fourth and Howard tied for ninth to each earn all-state honors for California.

Pintos coach Lance Boyd felt going into the two-day tournament his team had an advantage from already playing at Columbia Country Club twice this season. Not only did they have a good look at the course, but it also made it a little easier for the Pintos to anticipate the scoring pace of the tournament. In addition, the weather would not cause any difficulties for the golfers except for a slight breeze on some of the holes on the back nine.

"We definitely felt like we had a bit of home course advantage since we had already played two tournaments at CCC (Columbia Country Club)," Boyd said. "The boys put their knowledge of the course to good use. For the first time this golf season, the boys got to enjoy two pleasant days of weather on a course that was in excellent condition. The entire field benefited from the beautiful weather and pristine conditions."

After the first day of competition last Monday, California was in first place in the team standings, two strokes head of Barstow. In the individual competition, Boyd was in fourth place with a 7-over 78. Dunnaway stood in seventh place with an 11-over 82, while Howard was just behind Dunnaway in ninth with a 12-over 83. Hackett shot an 18-over 89 in the first round.

During some stretches of the course -- like holes 10, 11, and 12 -- California knew it would have to find ways to stay as close to par as it could, because par would be a good score. The strategy paid off and the Pintos were able to keep their lead through the second day of competition.

"We knew going into this tournament that holes 10-12 would play with the most teeth, and that stretch proved to be a big difference in the tournament outcome," Boyd said. "Our goal was to play bogey golf through those 3 holes, and we did slightly better than that by playing those three holes a combined plus-21. By comparison, second-place Barstow played those three holes plus-27. The boys kept their cool through that difficult part of the course and it paid dividends."

When the dust settled and the final scores were tallied, California claimed the title with a 671, 11 strokes better than Barstow. Boyd finished fourth in the individual competition with a score of 153, while Howard finished ninth with a combined score of 169.

Coach Boyd was proud of all his players in that they contributed exactly what they needed for California to win the state championship.

Despite shooting 78 the first day and being in the fourth place in the individual competition, Will Boyd did not have the Day 1 he wanted as he struggled to sink a couple of his putts but came back strong on Day 2 by finishing the back nine of the course two-under-par to secure fourth place. Dunnaway was solid on both days and kept his composure when he did have some struggles in his second round. Howard played a steady tournament of golf and helped California put up low scores during some of the hard holes on the course. Hackett had a difficult first day, but found the touch to his swing in round two and closed strongly.

Coach Boyd made history in his first season as head coach, and he used the foundation built by those before him to lean on. Now it's time for the Pintos to celebrate and Boyd expressed how he couldn't have been happier for both his team and California itself.

"The boys were incredibly happy to bring home the first golf state championship in Pintos history," he said. "This is my first year as coach, and I'm only the third boys golf coach in program history. That's pretty impressive for a program that goes back to the 80s. Coach Wells and coach Miller had a lot of success with this program in the many years that they each coached it, and they really set the foundation for something like this to happen. This championship is part of their legacy.

"As for the boys, they will always be remembered for bringing this trophy home to California. And they conducted themselves as champions throughout the season. Many times this year other coaches and parents would tell me that they were not only impressed by the boys' skill on the course, but also by the good character they displayed. This is a group the entire community should be proud of."