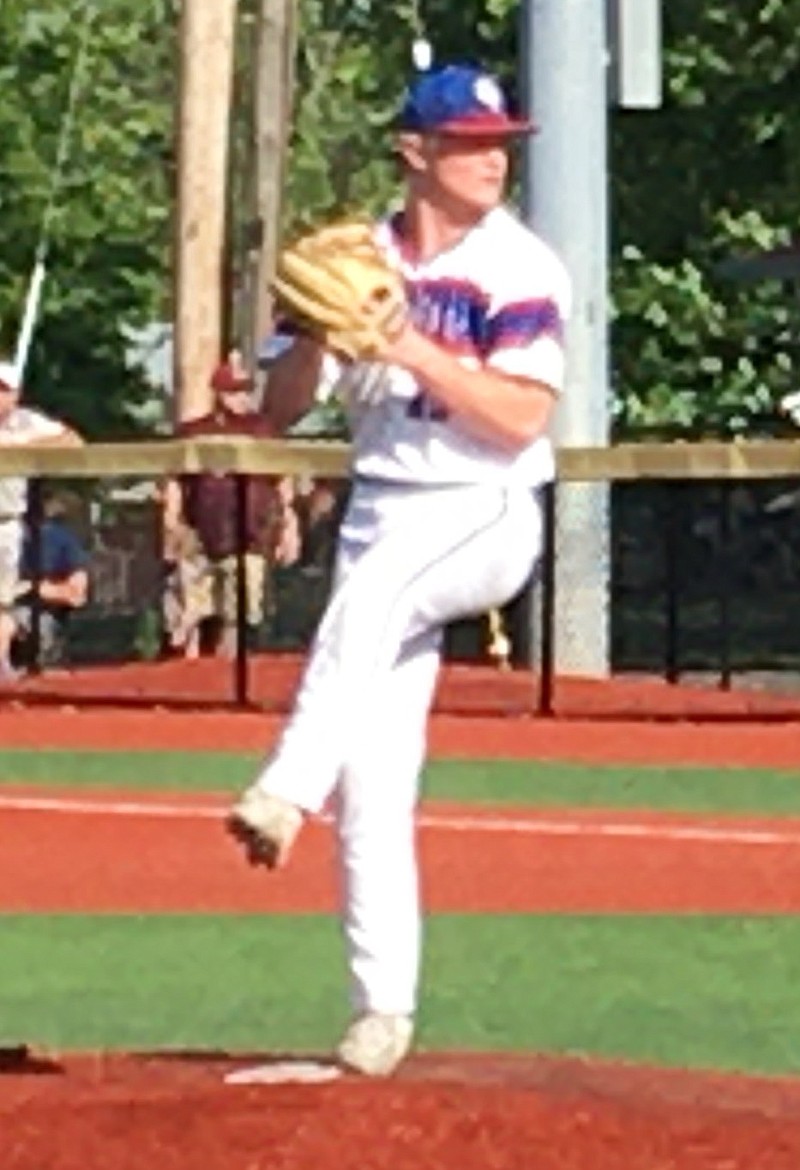 The California Pintos are baseball district champions. That is a sentence that hasn't been uttered since 2007.

The California Pintos had been on a roll for most of the 2022 season and had secured the No. 1 seed in the Class 4 District 9 tournament in Versailles, defeating Eldon 7-5 to win their first baseball district title in 14 years.

After soundly defeating the Buffalo Bison 10-0 in six innings last Monday, the Pintos went back-and-forth against the Mustangs for most of the way, until California took advantage of some pitching struggles from Eldon in the fifth inning to score four runs. The Pintos did face a seventh-inning scare but managed to hold on for the victory.

"I told our guys before today's game that we only had one more important game to win," California head coach Steven Stock said. "Now we've won that game and it's time for us to start a new journey. This was one of our main goals this season and now we've done that," Stock said. "We're now going to take every game one at a time and continue this ride as long as we can. Logan- Rogersville has a really good team and we look forward to getting down there and playing baseball again."

In the district final against the Mustangs, it was junior Ian Peterson for California taking on sophomore Hunter Hees on the mound. Eldon opened the scoring in the bottom of the first when senior first baseman Jason Holland hit an RBI single to score a runner from third base. But California answered in the bottom of the first and tied the game at 1 after a balk from Hardy allowed senior Calen Kruger to score.

The tie carried over into the third inning where Peterson ran into a predicament when he loaded the bases with no outs. Peterson's third-inning situation went from bad to worse when he gave up two runs after loading the bases, first on a bases-loaded hit-by-pitch and then an RBI single from junior Cannon Ahart to give Eldon a 3-1 lead.

Stock had slowly brought Peterson back into the rotation after the junior came back from an ankle injury that had sidelined him for two weeks. Stock said Peterson had a few stretches in the game where he wasn't on top of his game and had a hard time throwing the ball in the strike zone. But Peterson did finish the game by giving just four runs on three hits with three walks and five strikeouts.

"Ian got himself into trouble a couple of times and he was able to find ways to leave runners on base," Stock said. "These are tough games to pitch in and you need to find a way to put the pressure off to the side and take care of your business. The pressure was great, but Ian was able to keep us in the ball game. Without his help, we might not have won today. You've got to tip your cap to him."

California got a run back in the fifth inning after junior Hunter Berendzen led off the inning with a stand-up double and later scored on an error to make it 3-2.

Then in the bottom of the fifth, California took control of the game. The inning began with three straight walks to load the bases. Senior Logan Bax then reached first base on an error, allowing sophomore Cameron Combs and senior Trevor Myers to score and put California in front 4-3. Senior Ethan Bloch then hit a single to advance Bax to third. Peterson followed that with a sacrifice flyout to score Bloch. Senior Kaden Bax then completed the Pintos surge with a triple to right field to drive home his twin brother, Logan, to give California a 6-3 lead.

California sophomore Will Edwards gave the Pintos one more run in the sixth with an RBI double.

"They did everything in the fifth inning to help us take the lead in the ballgame," Stock said. "We were fortunate enough to capitalize on the walks that they gave us and both Logan and Kaden Bax came up with big hits when we needed them. That inning really helped us get some confidence and I think that the guys thought at the moment that this game can be theirs for the taking. When we got to the seventh, we let them back in the ball game. Calen had a tough time finding the strike zone and we knew that we still had to earn the win. Eldon wasn't going to give up. That's just the type of team they are. But we got it done and I couldn't be happier for our guys."

The Pintos were only three outs away from a district title and a four-run cushion to fall back on. After Peterson walked the first batter of the inning, Stock decided to take him out of the game and gave the nod to Kruger. But just as Peterson did in the third inning, Kruger has difficulties finding the strike zone and Eldon was suddenly back in the ball game. Kruger walked the next three batters, allowing junior Kasen Bashore to score make it a 7-4 game. Kruger and the Pintos caught a break when they got a double play against the next batter. Hunter Hees did make it home to make the score 7-5. With a runner on second with two outs, Kruger faced the batter that represented the game-tying run, stared the batter down and struck him out to end the game and give the Pintos the district title.

The Pintos' postseason ride went through U.S. Ballpark in Ozark on Tuesday to take on Logan-Rogersville (23-7) in the sectional round of the Class 4 state tournament. 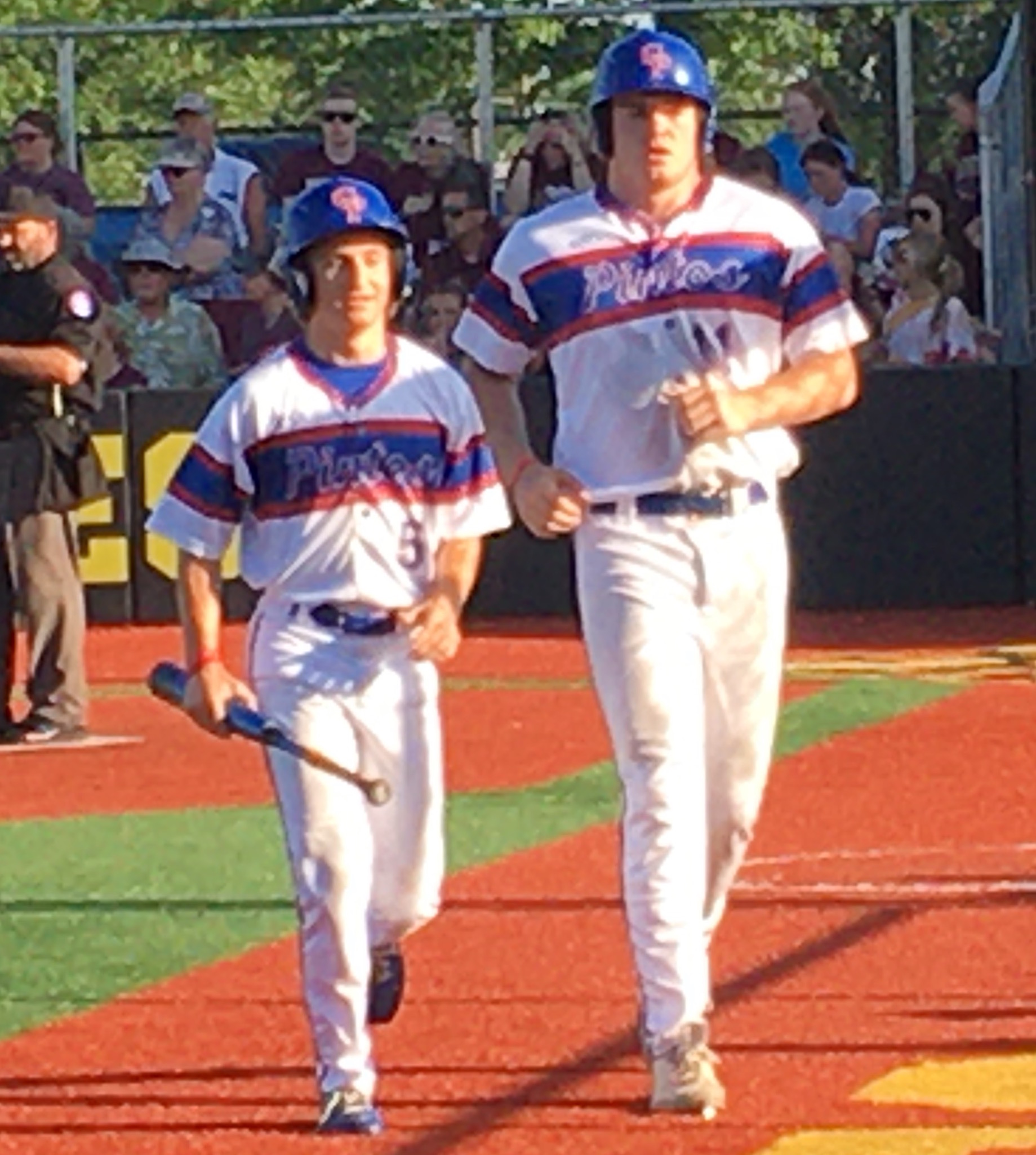 Sophomore Cameron Combs (left) and senior Trevor Myers (right) head back to the dugout after the Pintos take a 4-3 lead in the fifth inning. 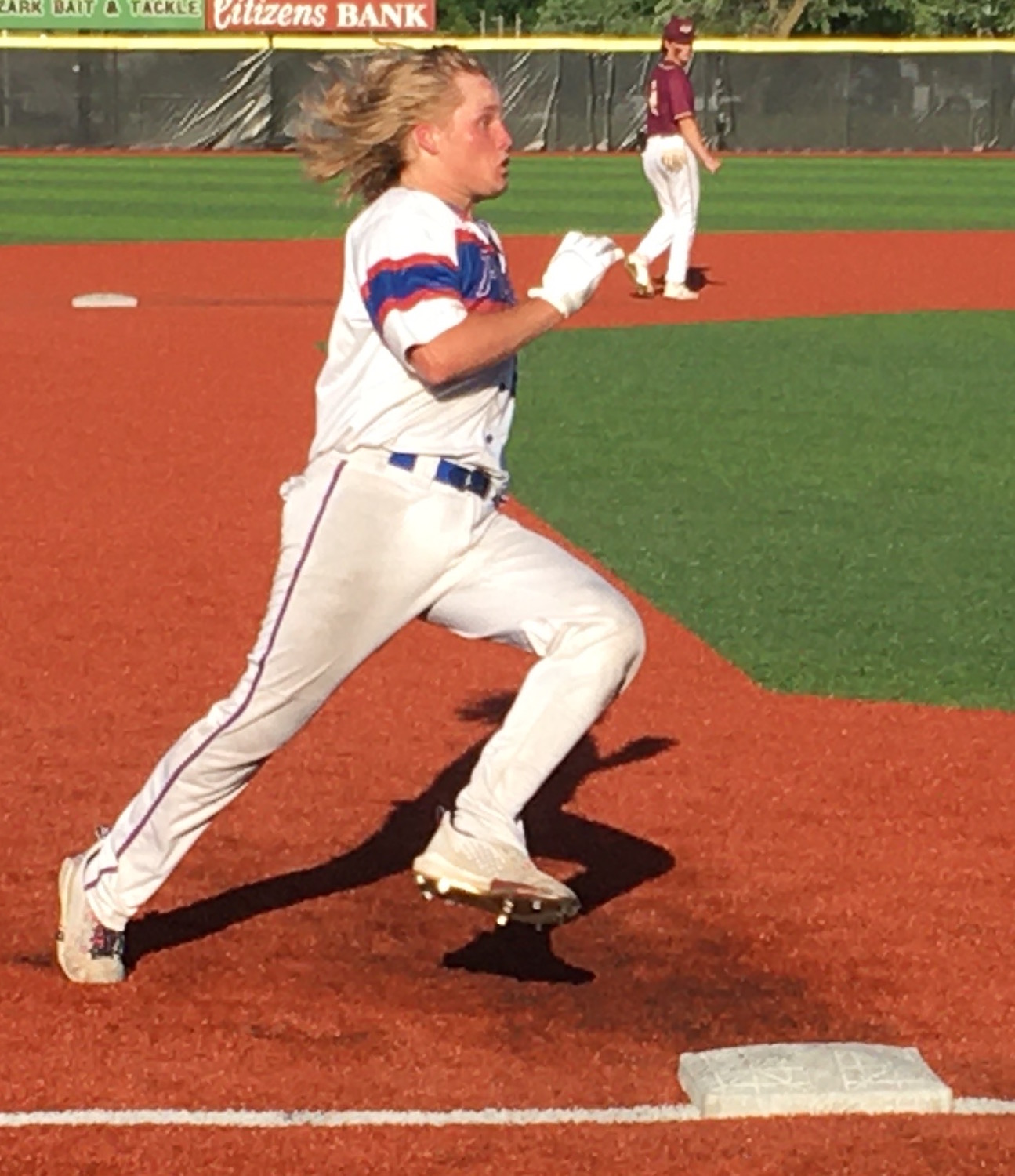 Senior Kaden Bax reaches third base and gives California a 5-3 lead in the fifth. 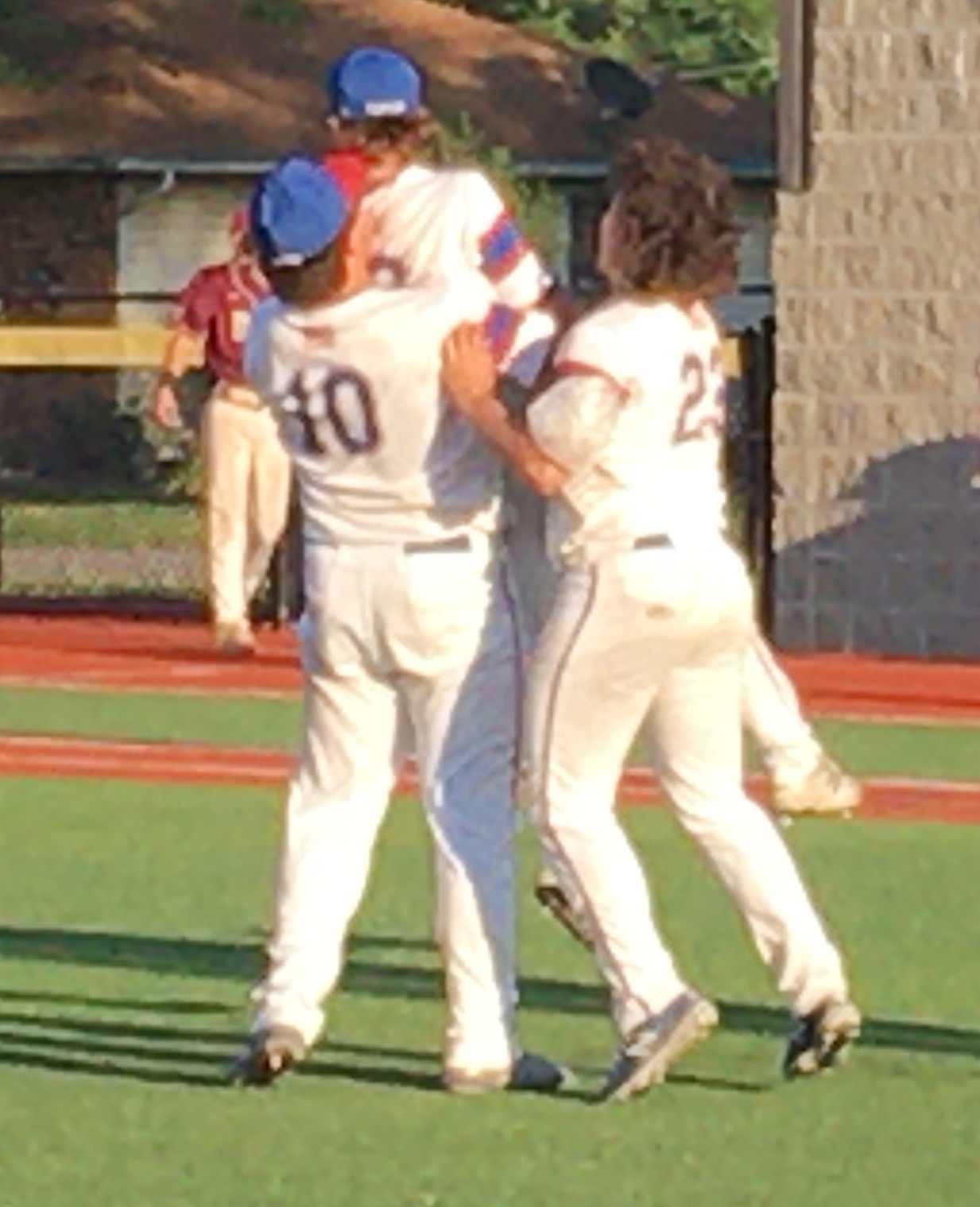 Senior Calen Kruger is mobbed by his teammates after clinching the district title. 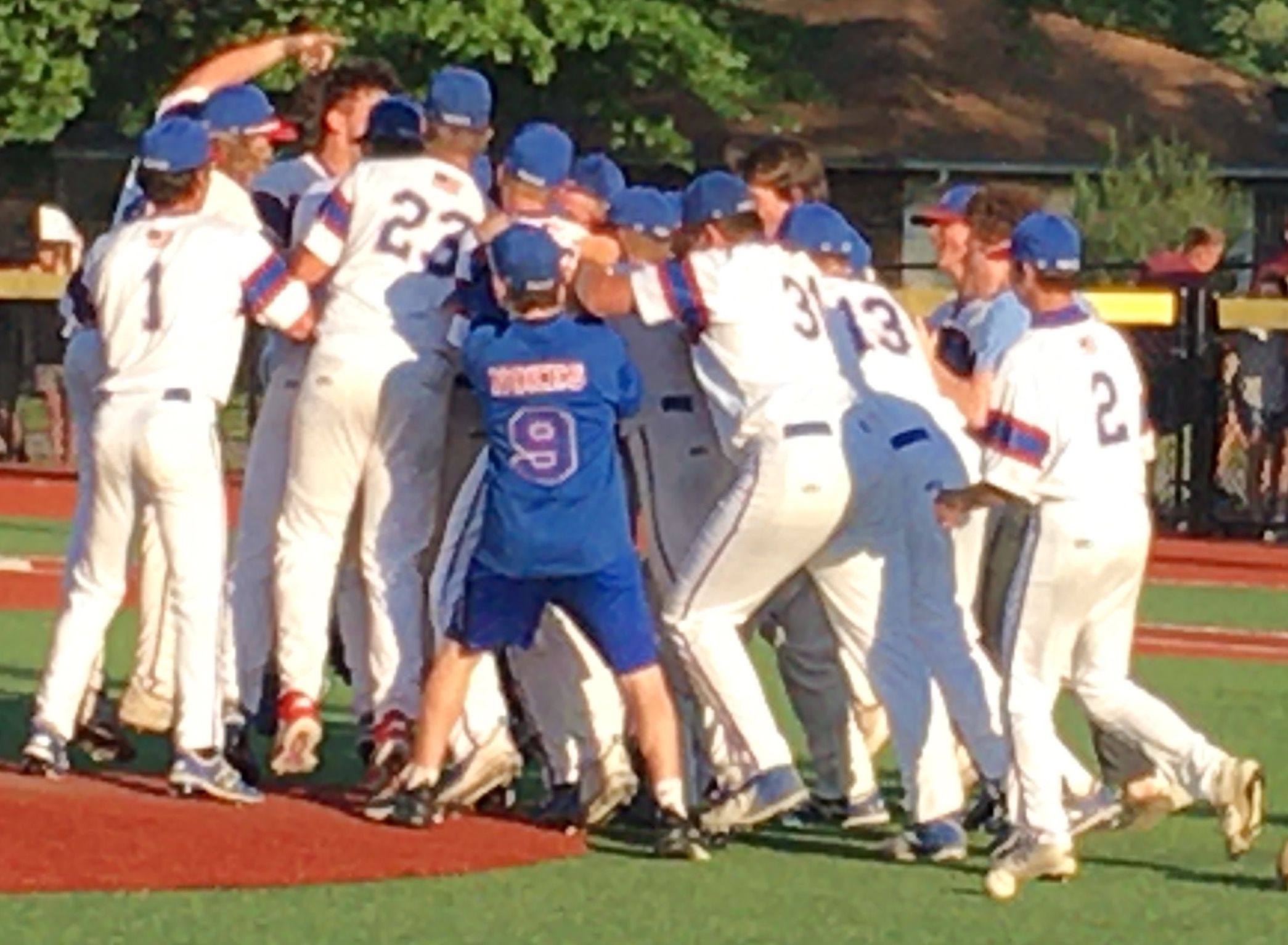 The California Pintos celebrate their district championship win over Eldon on Wednesday. 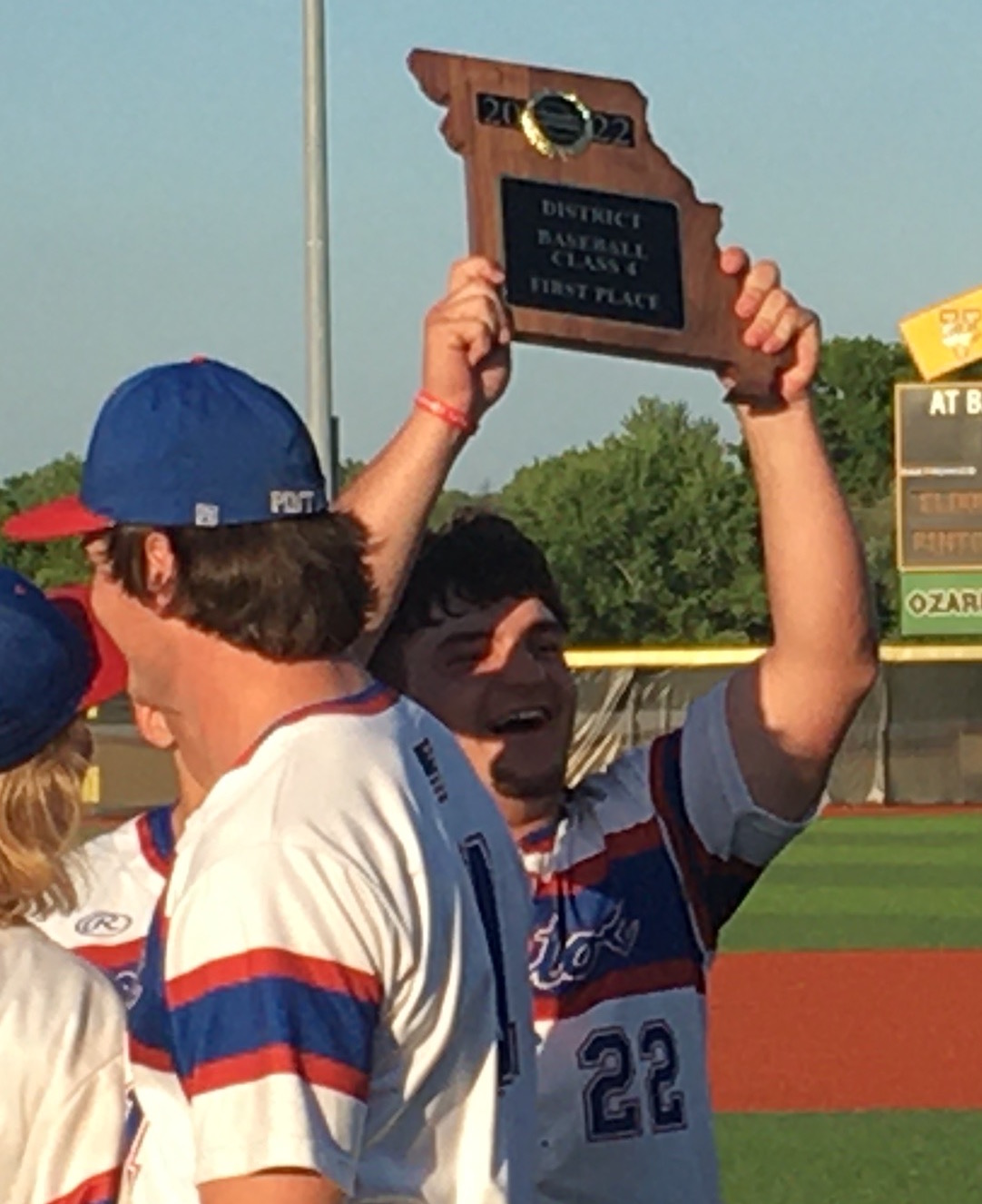 The Pintos won the Class 4 District 9 championship over Eldon 7-5. They will play at Logan-Rogersville on Tuesday night.