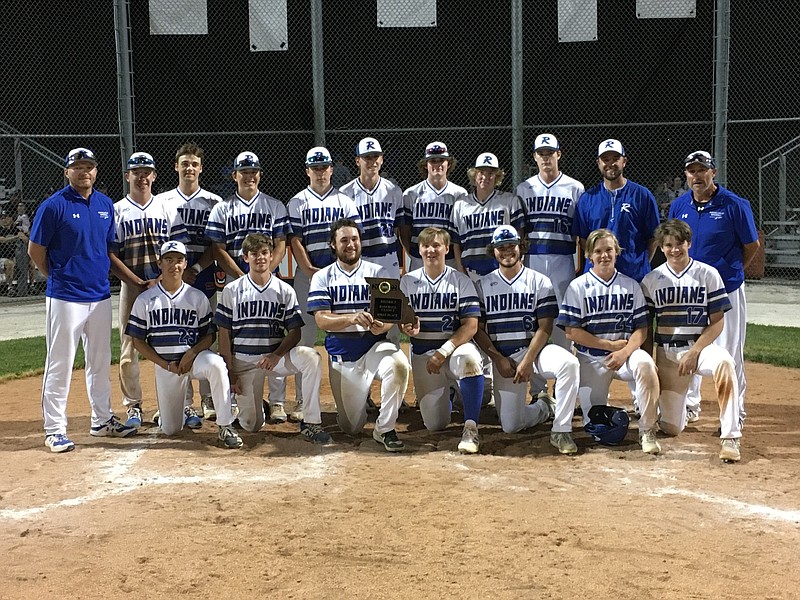 The Russellville Indians won their fourth district in six years last Tuesday night in a 3-2, 10 inning win over the Eugene Eagles.

The Indians will host Putnam County today in the Class 2 quarterfinals defeating New Bloomfield and Eugene in districts by respective scores of 5-0 and 3-2 in 10 innings and then Salisbury 6-2 in sectionals.

Russellville held the enviable position of No. 1 seed at the Class 2 District 8 Tournament in New Bloomfield. The Indians took care of business in the semifinals against host New Bloomfield last Monday and then moved on to the finals to play the team that knocked them out of the playoffs a year before, the Eugene Eagles.

From the opening pitch of the game, Russellville knew that they were in for a fight against the Eagles. For Eugene, their game started and ended with senior pitcher Tyler Renn. Renn left the Indians guessing and swinging at pitches from all angles. When Renn's pitching onslaught was complete, he had struck out sixteen Russellville batters and had thrown strikes on 84 of 108 total pitches.

"Tyler was fantastic today," Russellville head coach Lucas Branson said. "There's a lot of great players in this area and he's one of those guys that's at the top of the list. Every time that he is out their on the field, we know that every single pitch, he is going to be locked in. Our guys didn't execute perfectly. But we were able to stay in it and just kept battling. I told our guys that we just need to grind out at-bats."

Despite going up against a man that had been throwing strikes all night, Russellville was able to stay in the game with their own stubborn defense with senior pitcher Logan Cinotto leading the charge. Although the Indians defense wasn't as pretty by allowing more runners to get on base, Russellville kept themselves in a scoreless ball game.

But Eugene brought the scoreless streak to an end in the top of the fifth when Tyler Renn's little brother, Colby Renn, hit an RBI single to left field and the throw was cut off, giving the Eagles a 1-0 lead. Eugene had drawn the game's first blood and Russellville now had to play catchup with a seemingly large one-run deficit. But the Indians surprised everyone by tying the game at 1 in the bottom of the fifth inning when junior catcher Jake Schulte drove in teammate Alex Oligschlaeger on a single to left field. The game remained in a 1-1 deadlock after Oligschlaeger was cut off at third base in the bottom of the seventh inning. The district championship game was now heading for extra innings.

Eugene retook the lead 2-1 in the ninth inning on another RBI hit from Colby Renn. Tyler Renn's night was now over and Eugene turned to senior Javan Steinhardt to take over as pitcher. Unlike Renn, Steinhardt had difficulties throwing strikes and walked the next batter to load the bases. Two batters later, Alex Oligschlaeger tied the game at 2 with an RBI single.

When the game went to the 10th inning, Russellville relief pitcher Jesse Daniel retired the side and gave the Indians their chance to walk-off with the district title. Javan Steinhardt once again struggled to throw strikes for Eugene and Russellville seized the opportunity by putting their first two runners, Alex Oligschlawger and Bryce Bryant, on second and third with no outs. After senior Isaiah Kauffman struck out swinging, Jake Schulte stepped up to the plate. Schulte swung on a 2-1 pitch and hit a flyball to deep left-center field to give the Indians the win and the district championship.

"I was just looking for a ball to put in the outfield," Schulte said. "That's really all I was trying to do. Get a little bit of air underneath it so the runner could tag. I got the pitch I wanted and I did exactly what I wanted to do with it. This is way up there in my favorite moments of playing baseball. I will never forget this game."

The win propelled the Indians to a berth in the Class 2 State Tournament and gave them revenge from the loss to Eugene in districts a year earlier. Coach Branson had a belief going into the late innings that the team who would win this game would be the one who got the last at-bat. His prediction was correct and it was his team that got the at-bat that they were looking for.

"Starting with the first day parctice, our goal was to be the one seed and have the last at-bat," Branson said. "We knew how important that was going to be having gone through the loss to Eugene last year in the semifinals. Where we didn't have the last at-bat. As long as we got that chance to hit last, we would be in a spot to win. We won this game because the guys believed in each other. The amount of resolve and just the fight that these guys have, it's something that we've built and establish a mindset. The best team may not always win, but the team that fights the best is the team that wins."

After the Indians calmed themselves down and moved on the sectional round of the Class 2 State Tournament, they made the trip back home to play host to the District 7 champion Salisbury High School Panthers. After leaving the bases loaded in the first inning, the Indians were able to pull out to a 6-0 lead on the Panthers with four runs in the third and two more runs in the fourth inning. Schulte once again led the offense by going 2-for-4 with three RBI and a solo home run to lead off the fourth.

Salisbury made a few minor adjustments and answered back with two runs in the bottom of the fourth, letting the Panthers back in the game. But Russellville's defense buckled down and kept Salisbury scoreless the rest of the way and advanced to the state quarterfinals with a 6-2 win over the Panthers.

Branson believed his team felt comfortable offensively because the early hits and bases they got throughout the first four innings. It gave them confidence to do it again and they knew they could get hits in bunches.

"I think that our guys were loose at the plate," Branson said. "We had a chance to get a couple of runs in the top of the first. We saw right away in the top of the first and I think that contributed to give guys throughout the lineup confidence and that second time through the lineup, we were able to break the game open. We didn't make very good adjustments after that. So that's something we will have to be better at. But that was the biggest thing."

On the defensive side, the Indians chose to give senior Charlie Miller the start on the mound. Miller provided a lift for Russellville by pitching a complete game for the Indians. Although he did give up two runs to the Panthers in the bottom of the fourth inning, Miller finished Monday's 6-2 win over Salisbury by allowing two runs on five hits and threw eight strikeouts.

"Charlie was really good today," Branson said. "His last several starts have been just fantastic. He's pitching at an elite level and he is an elite player and that's what we expect of him. Depending on who were playing, it's going to be a challenge. Obviously, when you get to late May and you're still playing and everybody is good. So we'll find out who we're playing and get ready for the next game." 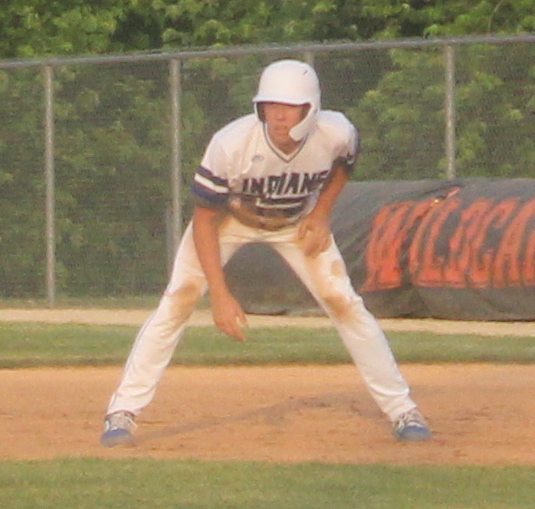 Junior center fielder Christopher Seaver looks to steal second base after hitting a single in the fifth. 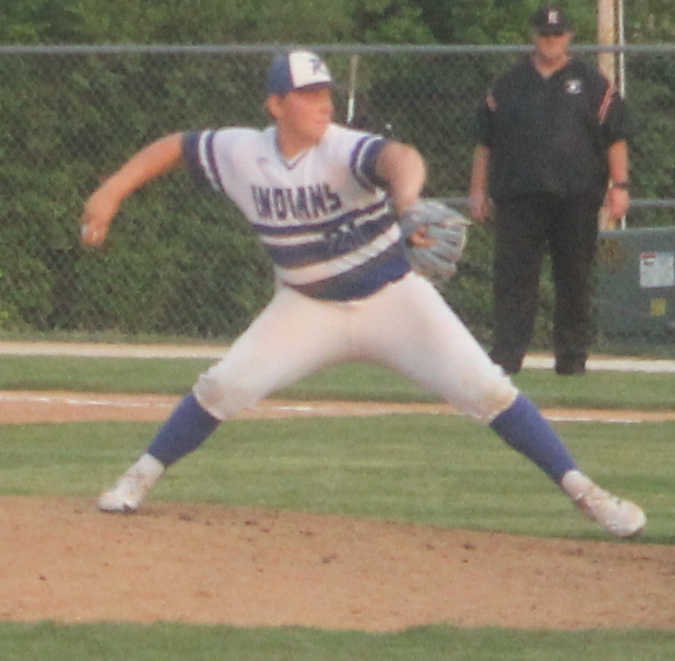 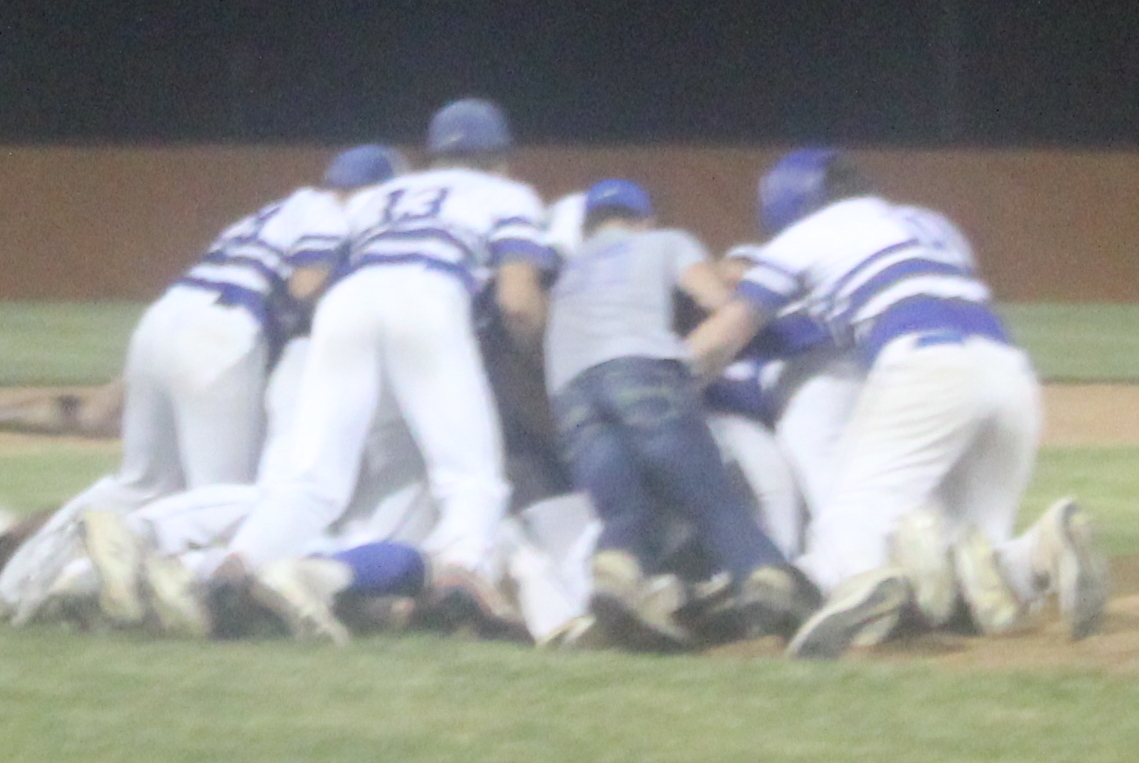 The Indians mob catcher Jake Schulte after the junior hits the district-winning walk-off double in the tenth inning. 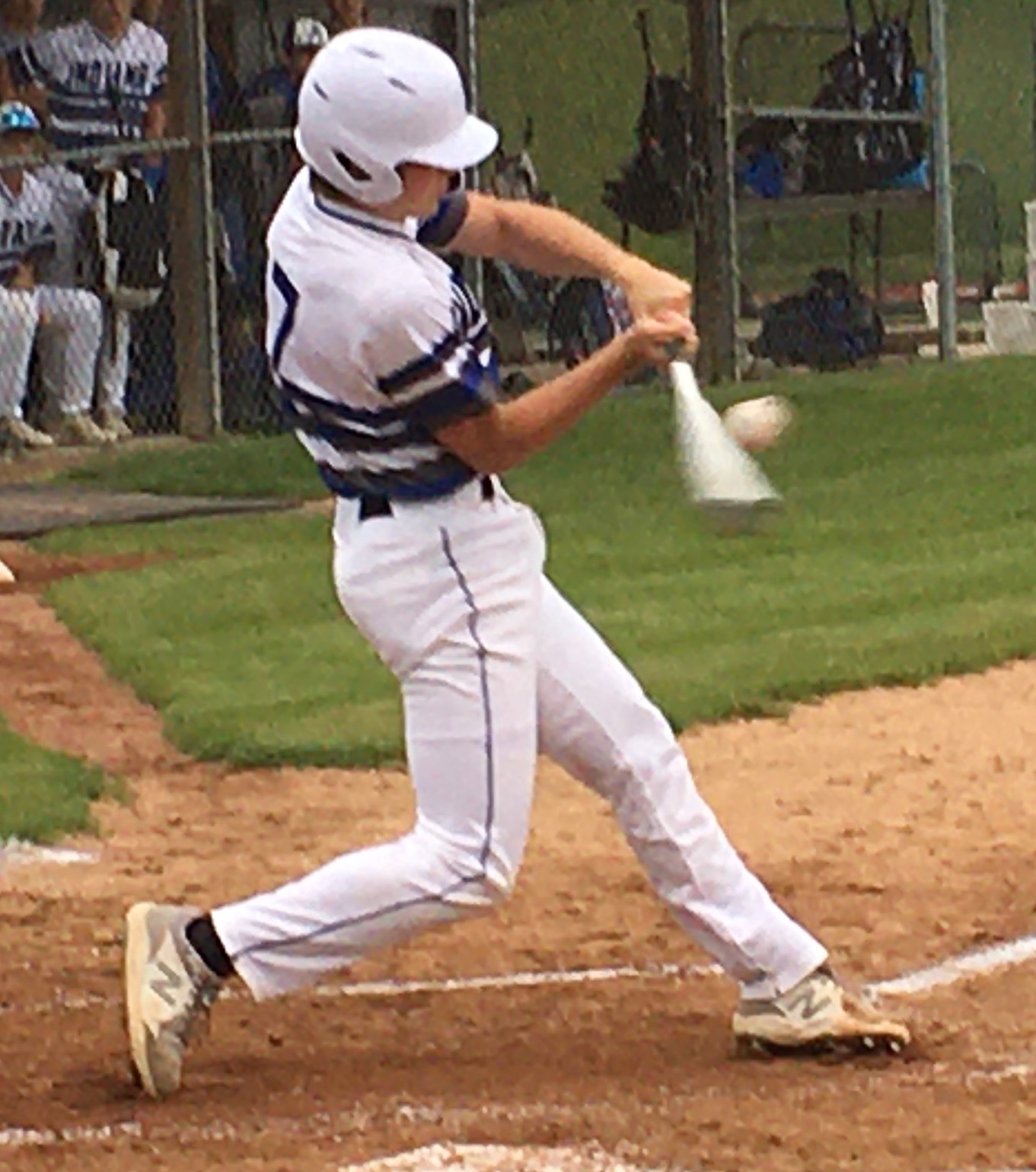 Junior Jake Schulte hits an RBI single to score two runs and give the Indians a 3-0 lead over Salisbury. 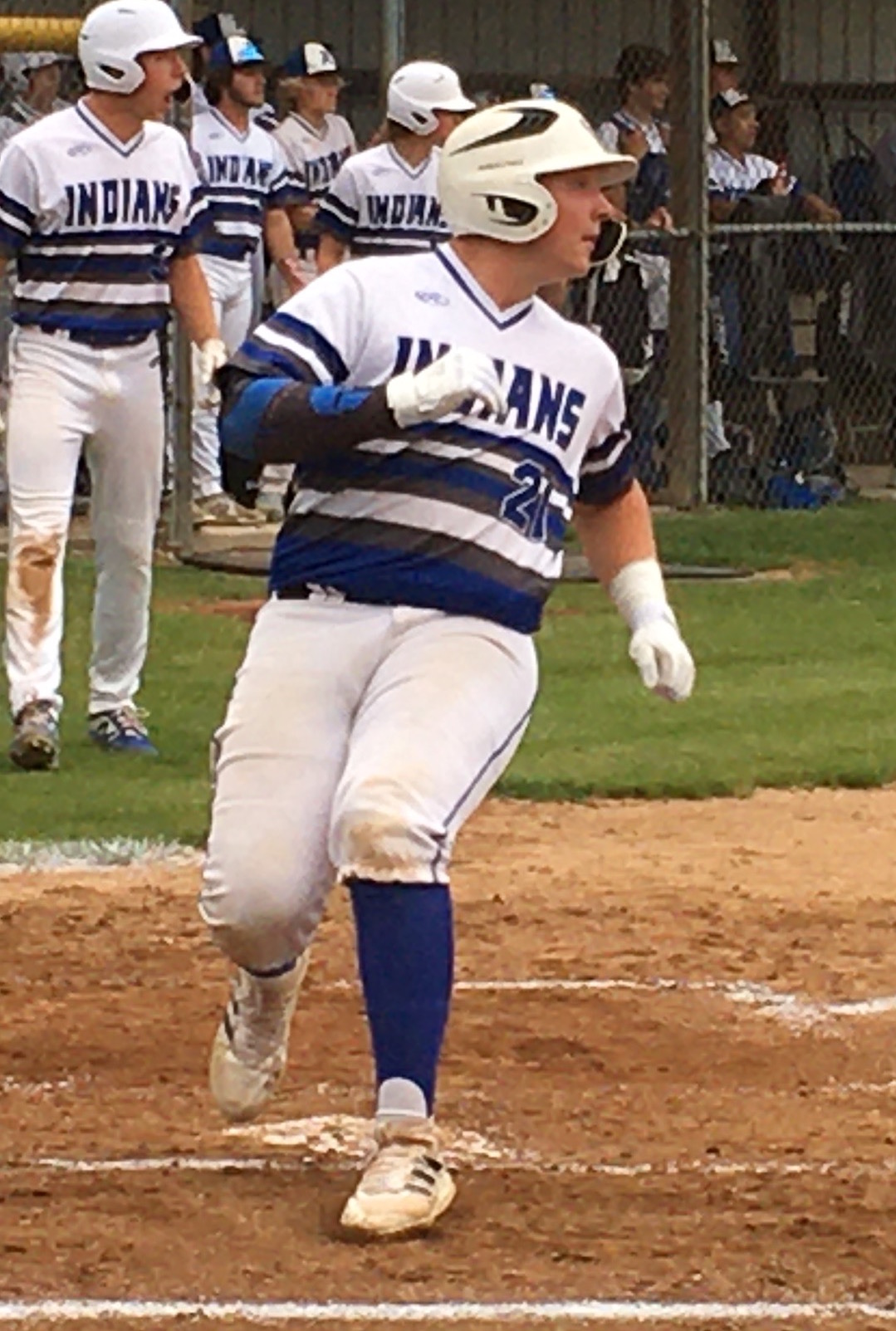 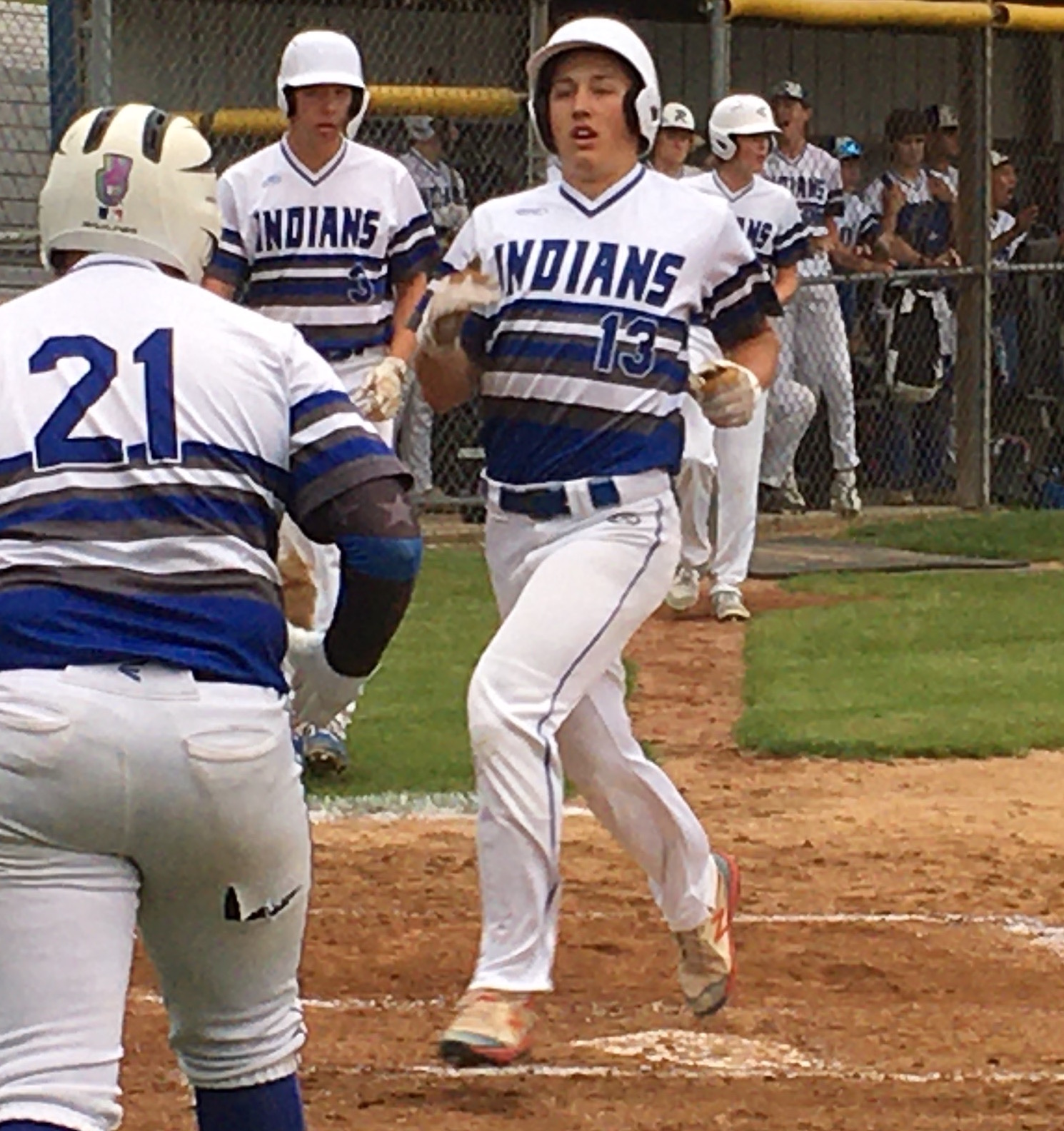 Junior Chris Seaver runs home to give Russellville a 3-0 lead in the third inning against the Salisbury Panthers. 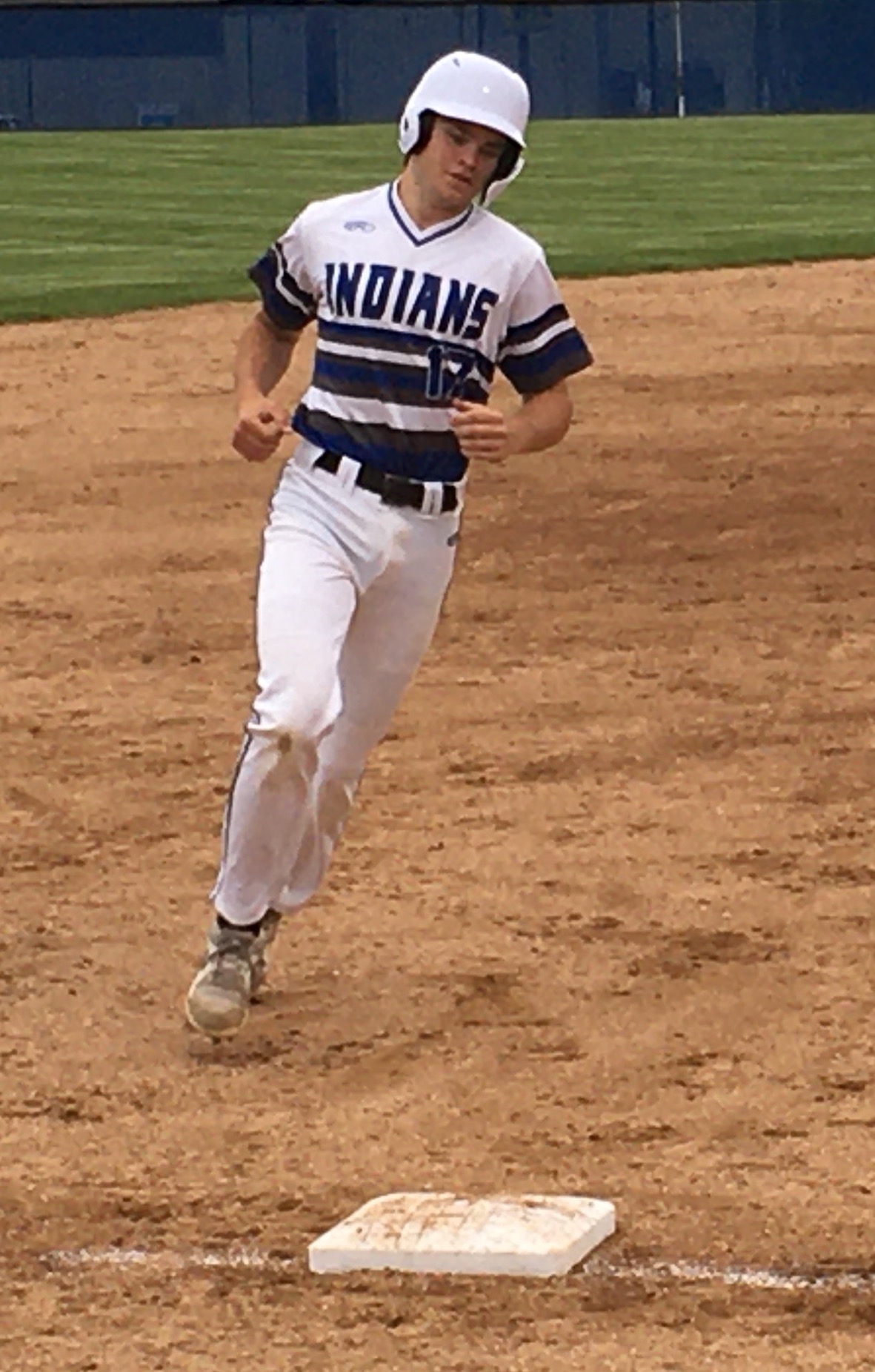 Junior Jake Schulte rounds third base after giving the Indians a 5-0 lead against Salisbury on a solo home run. 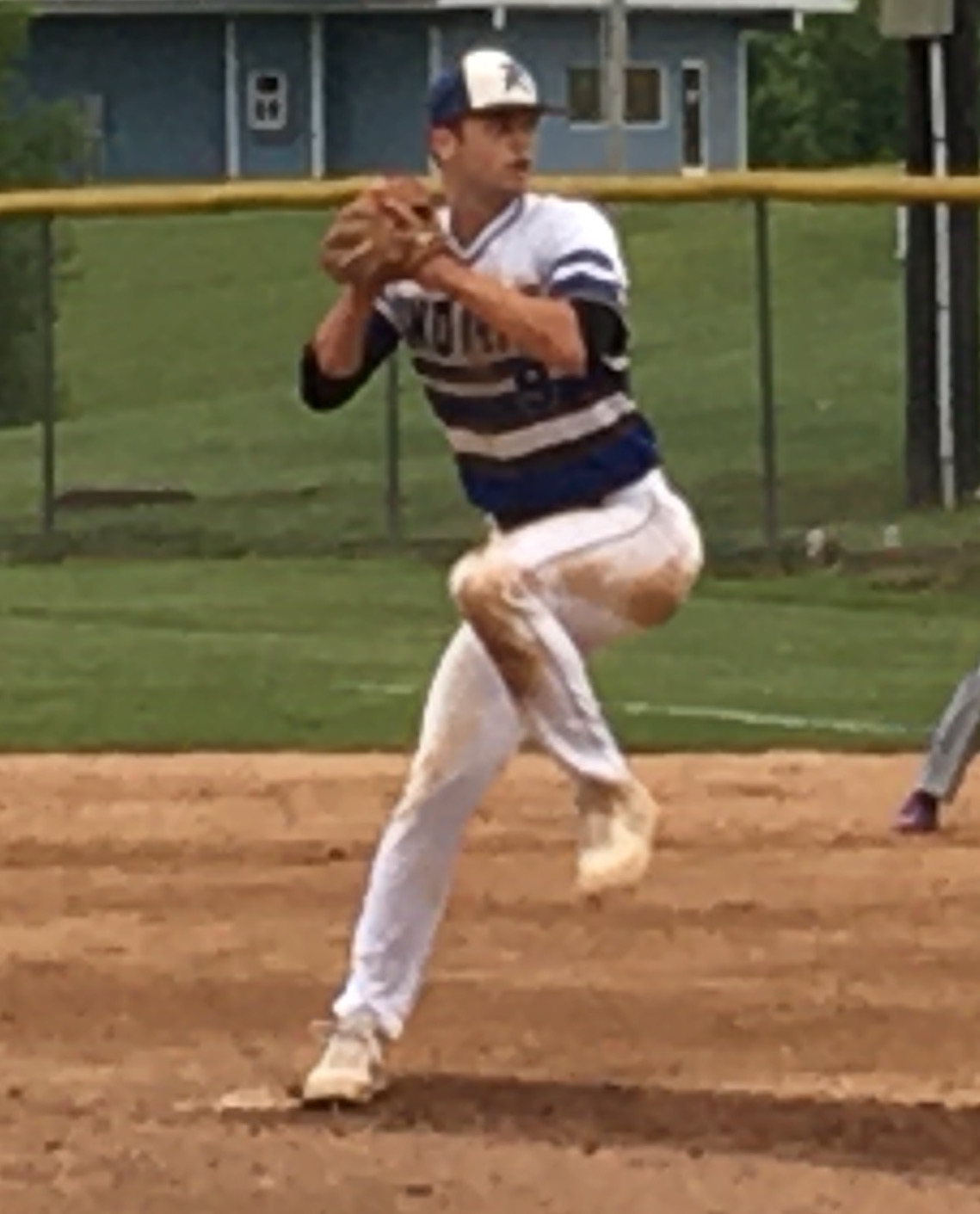