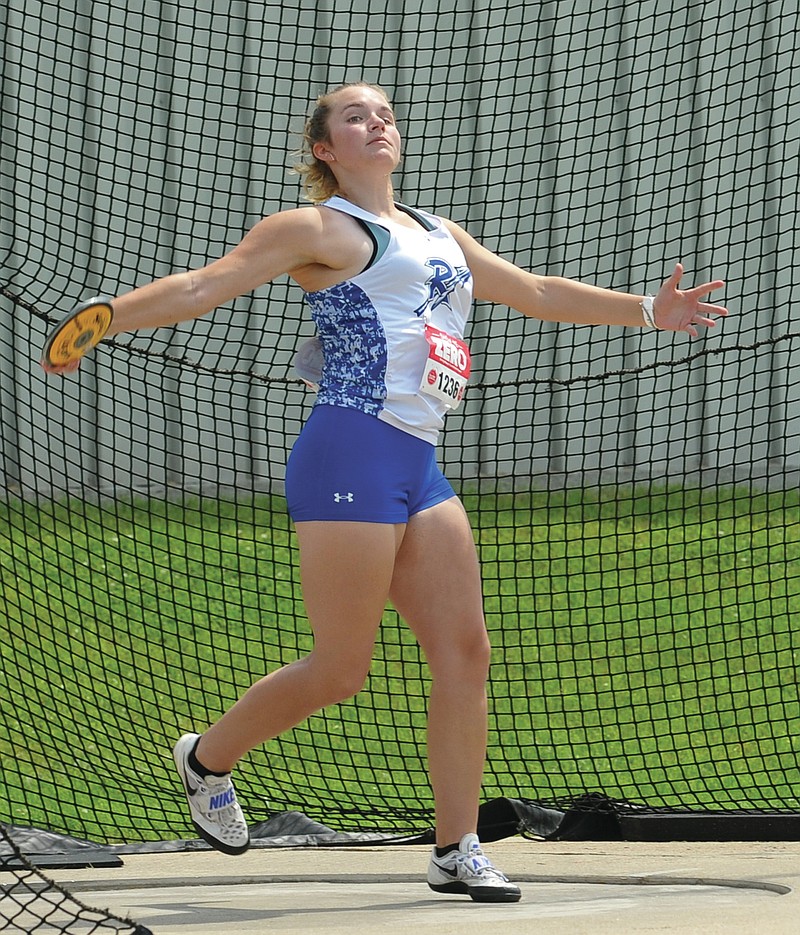 Russellville's Josie Stewart releases the discus on one of her attempts Friday, May 20, 2022, in the Class 2 track and field state championships at Adkins Stadium. (Julie Smith/California Democrat photo)

JEFFERSON CITY, Mo. -- Josie Stewart led the way for the Russellville Lady Indians on Friday in the Class 2 track and field state championships at Adkins Stadium with her third place finish in the girls discus.

Stewart claimed all-state honors and a podium finish after her throw of 119 feet, 10 inches, a personal-best for the junior.

"Calm mind, get in the ring and everything you're thinking about just goes away," Stewart said on how she was able to set a personal best on the biggest stage. "... I just wanted to give it all I got, as strong as I could get it out there."

Stewart lost out on the title to Schuyler County's Kaitlyn Hatfield, who won with a throw of 139-6 in her final attempt.

Stewart started the competition with a throw of 98-1 in her first attempt before setting her personal-best mark on her next throw. She closed out the opening round with a throw of 113-0 before three fouls while trying to improve her score in the final round.

"Amazing, it felt really good," Stewart said after receiving her medal on the podium.

Her teammate, Trinity Riggs, claimed 14th place in the discus as the only other Russellville athlete to compete in the state meet. She finished sixth in the same event at last year's state meet.

Riggs' best mark of 96-9 came in her first attempt before two fouls closed out her preliminaries. Only the top nine then advanced to the final round.