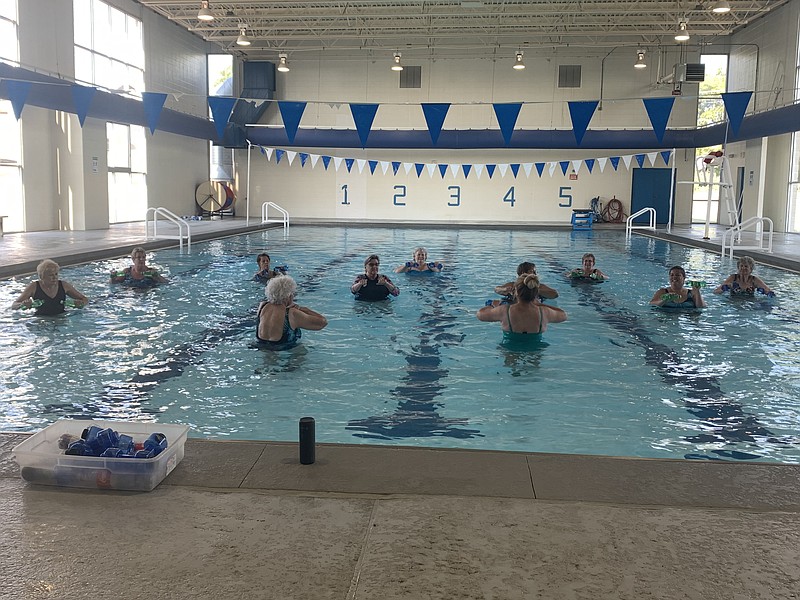 For some, exercise is a chore.

For Lana Dicus, exercise is fun.

The California native has combined two of her passions -- teaching and exercise -- into water aerobics classes at the California City Pool. Her classes, however, are not new; She has been teaching the classes twice a week since 1982.

Dicus said she has "no idea how many hundreds of people" have taken her water aerobics classes throughout the years. Her first exercise classed weren't in water.

Her sister, who taught Jazzercise courses in Chesterfield, inspired Dicus to teach the dance-style courses in the early 1980s in California.

Dorothy Hughes, a registered nurse at Memorial Hospital (now Capital Region Medical Center) in Jefferson City, contacted Dicus about sponsoring a water aerobics outreach program in California. She started teaching the classes after completing training. While her classes have remained a constant, she said much has changed.

For instance, the city purchased the pool from the the California R-I School District in 2008. Dicus said the city added steps into the pool, which has made it easier for people to enter and exit the water.

"I've added a few things," Dicus said. "Now we use water weights in the pool, and my music is better because they have easier sound systems. (The) acoustics are pretty bad in there. But through the years, you know, I've seen hundreds and hundreds of different people come and go through the class."

Dicus said water aerobics has numerous advantages over exercises, such as being able to exercise without hurting the joints.

"I've had several people come after surgeries because a lot of them can't even walk," she said. "But they can get in the water and, because of their body weight weighing so much less, they're able to get full range of motion in their joints, and get some cardio at the same time."

Another advantage, Dicus said, is the exercise portion and being able to strengthen your muscles.

"... Water is a natural weight, so you got the resistance of the water for your muscles, so if you're going to have surgery it's great because you can start strengthening those muscles," she said.

The heart also gets a workout. Dicus said water aerobics is a form of cardio anyone can do at any age. She said the classes, which meet for about 70-75 minutes, don't get your heart rate up too much, but instead keeps it up for a longer period of time.

"You never get your heart rate quite as high as you do as if you were running outside," she said. "We do use our arms a lot to get the heart rate up."

The advantages to water aerobics isn't just physical. Dicus said water aerobics offers a "mental lift" and friendships have been developed through her class.

Dicus said the classes are for everyone. She said parents have even brought their children to get them more active.

"In general, it's a great way for pretty much all ages to exercise," she said. "If you've had any kind of injury, it's great rehab."

Dicus said one of her concerns is the lack of attendance at the pool, which could be caused by a lack of promotion.

"I have two ladies who are coming now that aren't natives and they had no idea there was a pool in town," she said. "... I would like to see some signage out, even by the pool (with) like the hours it's open, what's available there to use, because I still feel like that pool could be utilized a little more efficiently than it is."

In addition to a lack of promotion, Dicus said the removal of amenities, such as an outdoor diving pool and wading pool, has had a dramatic effect on usage.

"When they took the diving boards and the baby pool out, the attendance just fell dramatically," she said. "There was really nothing for kids to do except cool off."

She said she remembers the same facility being so crowded in the late 1970s that her son had to remove his swim ring and vest to enter the pool.