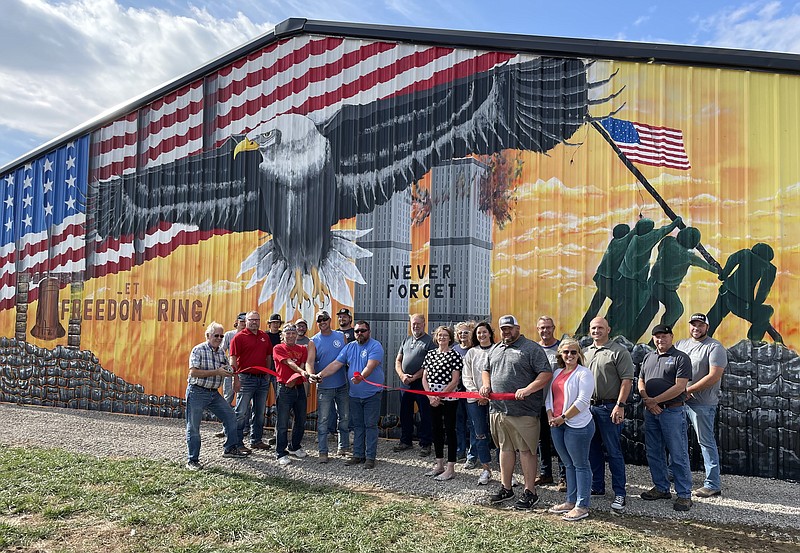 Democrat photo/Kaden Quinn The California Area Chamber Commerce stands with painter Dennis Holliday and Drinkard Construction, Get It, LLC owners Curt Drinkard and Josh Hoskins as they cut the ribbon to their company's new mural on Friday, Nov. 4.

A massive mural celebrating American history, culture and freedom now adorns the side of a local business in California.

The California Area Chamber Commerce gathered at 711 Pinto Lane for Drinkard Construction, Get It, LLC's ribbon cutting for its new mural.

After moving from their first base of operations on 102 Railroad Ave., Drinkard Construction, Get It, LLC owners Curt Drinkard and Josh Hoskins decided to add some flare onto their new location.

The two commissioned Drinkard's cousin, Dennis Holliday, a local artist, to paint a mural on the side of their building. They explained Holliday previously painted a mural onto the side of their last building and hoped he could provide the same service to where Drinkard Construction operates today.

Drinkard said he and Hoskins found an image celebrating America's history they wanted painted onto their business. The two believed it would act as a proper send up to the country's past.

"We wanted to do something on the end of this (new building), just to kind of give back and that kind of stuff and wanted to kind of do a tribute thing" Hoskins said. "We saw something similar to this. We talked to...Denny about it and he's like, 'Sure, no problem.'"

According to Holliday, the mural is about 60 feet wide and 27 feet high. Although he doesn't have an exact amount of time he painted the project, he said he tells people he worked about 1,000 hours on the mural.

He explained Drinkard and Hoskins initially only wanted a large American flag and a bald eagle flying beside it as the image for the mural, however, more details began to accumulate as time went on.

Eventually, Holliday added images of the 9/11 attack on the World Trade Center, World War II soldiers raising the flag at Iwo Jima and the Liberty Bell. These images even have flourishes of their own with small details signifying different times and dates they occurred in history.

"There's a lot of climbing up and down scaffolding," Holliday said.

Holliday said he had a construction business for a long time, however, working in art is something he's done "forever."

Along with acting as an art teacher for schools such as Calvary Lutheran High School in Jefferson City, Holliday also painted on murals throughout Mid-Missouri. This includes a mural he created at the former Westgate Lanes in Jefferson City, murals commemorating California history and murals painted in Eldon and Versailles.

"After my children graduated and moved out of the house, I got to tell people that I'm like an athlete - I get paid to play," Holliday said. "This is a good time for me."

Drinkard and Hoskins said they love the mural and what it represents. They wanted something patriotic and are happy it signifies Americans' ability to be free to pursue success in whatever field they please.

"It means a lot. You know what I mean? Just the freedom (it represents)," Drinkard said. "You get all the American freedom of being able to...start a business and doing good work, quality work for people. Just being able to do what we do in America. To be proud citizens. That's exactly what it's all about."