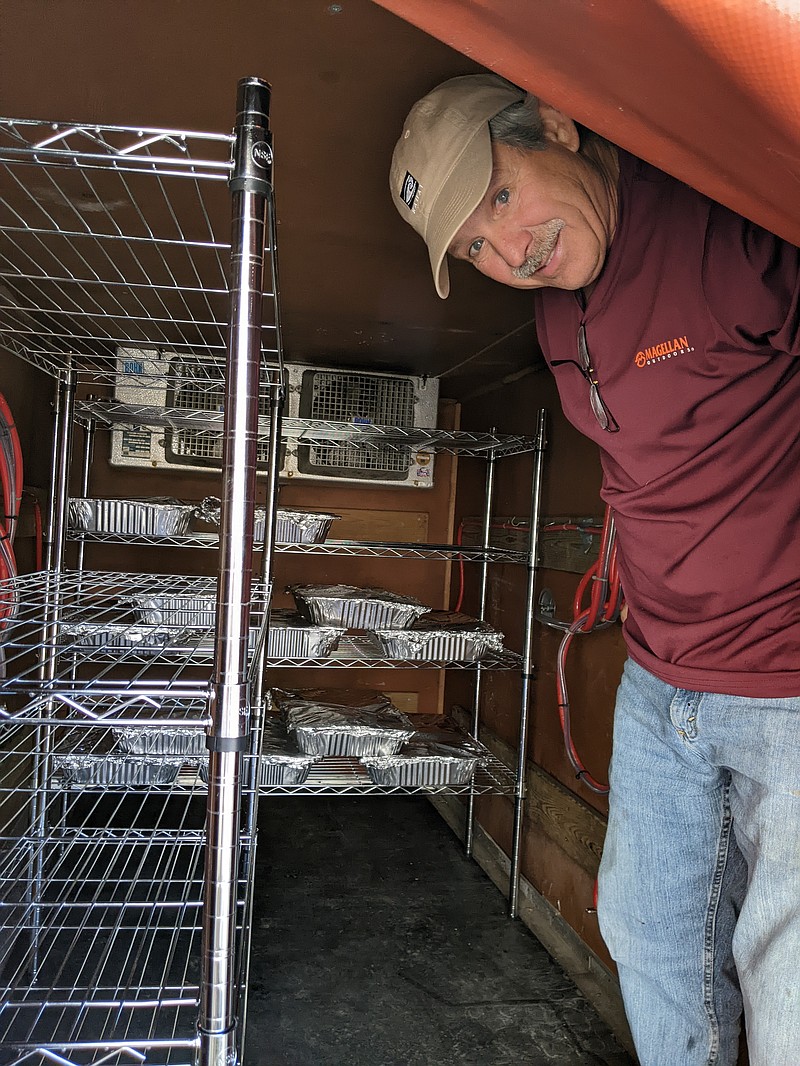 Preparing a Thanksgiving meal for about 1,000 people takes days.

The church is expecting between 850-1,000 people to get a free, hot Thanksgiving meal at its 14th annual holiday feast and fellowship event.

Immaculate Conception, located at 1206 E. McCarty Street, is serving turkey, stuffing, mashed potatoes, green beans, corn, yams and dessert from 11 a.m. to 1 p.m. Thursday. Dine-in, carry-out and delivery options are available, and meals can be reserved by calling the church office at 573-635-6143.

Mike Schnieders was among the crew firing up the ovens at 5 a.m. He and the other volunteers roasted and deboned 50 turkeys throughout the day.

The turkeys weighed 926 pounds altogether, which Schnieders said will likely net about 460 pounds of cooked meat.

Bruce Ring, who Schnieders refers to as the head cook, said the most difficult part of cooking 50 whole turkeys at once is thawing them.

"It takes forever to thaw the things," Ring, the former owner of Zesto Drive-in and a champion barbecuer, said with a chuckle.

Immaculate Conception volunteers have prepared its Thanksgiving turkeys the Sunday before for years, Schnieders said.

Time is spent cooking turkeys in ovens and electric roasting pans, removing meat from bones, putting the turkey meat into pans with gravy to prevent drying and storing the pans in a donated refrigerated trailer.

Sunday's prep work unfolded like an assembly line. Some volunteers cleaned the birds and pulled out their necks and gizzards while others added a full stick of butter, salt and pepper to each before cooking.

"I can only get this kind of help on Sunday," Schnieders said. "You know, Monday and Tuesday folks got to go back to work, Wednesday once again. There's way too much going on Wednesday, so this just works."

Patricia Dohlman is preparing stuffing and rolls Wednesday, Schnieders said, but the rest of the sides and desserts are made Thursday. The turkey is reheated in the oven Thursday before it is dished out onto plates.

The church used to exclusively use its ovens to cook turkeys but has learned during the past decade and a half to incorporate electric roasting pans, Ring said. The donated refrigerator, previously used as a beer wagon, became necessary after the closure of Save A Lot, which used to allow the church to store its turkey pans in its refrigerators.

"It's gotten down to a science now," Ring said.

"You have some down time where you're just waiting for stuff to cook, but for the most part it goes pretty quick," he continued.

Ring, who said he likes to think of himself as a worker bee in the Thanksgiving operation, has been around since the beginning. He said attendance at the meal has ballooned since the church started doing it around 2008.

"It's probably a bad thing that that many people need to have a free dinner, but it's a good thing that you've got a lot of people that you're helping get a good Thanksgiving meal," he said.

As of Sunday, nearly 500 people had called to ask for Thanksgiving meal deliveries, Schnieders said. He said he's expecting a similar number in combined dine-in and carry-out meals.

The church served about 850 people last Thanksgiving, which was down from prior years. About four years ago, Schnieders said, Immaculate Conception served about 1,200 meals.

The meal isn't restricted, he added, so anyone and everyone is welcome to grab a meal to go or take a seat at the shared table.

The Jefferson City Police Department will be among those getting a Thanksgiving meal from Immaculate Conception. Schnieders said the department is set to get 25 meals this year.

"Bring it on," he said. "Let's take care of them. If nobody's cooking them a Thanksgiving meal, we will."

Schnieders said the Immaculate Conception parish has really embraced the Thanksgiving meal as an annual tradition.

In addition to volunteering their time to prepare and serve food, members of the congregation donated non-perishable food items and cooking supplies. From donating canned goods to delivering meals, Schnieders said hundreds of people contributed to make the meal a success.

"They sign up and they donate every bit of it," he said. "I usually don't have to buy very much, maybe some yams but that's about it."

Anna Kolb said she volunteered to break down turkeys Sunday to help those in need and the elderly who may not be able to cook a Thanksgiving meal or have a family.

She said everyone deserves some sense of community and a place to go to celebrate the holiday with others.

"I just think it's a really cool event," Kolb said. "You see a lot of people come together -- people bringing food, people volunteering."

By Thursday, the multipurpose room of Immaculate Conception becomes "a machine in motion," according to Schnieders.

Volunteers manage each portion of the service, from greeting people getting a meal to delivering those who can't make it in person.

About 90 percent of the meals are gone within an hour and a half, Schnieders said.

"It's like a vacuum," he said. "It kind of gets your heart rate up and then it's almost over and you're going, 'Whew, what just happened?'"

In addition to Immaculate Conception, several area nonprofits and churches are providing fresh meals on Thanksgiving Day or providing Thanksgiving food to families in need. 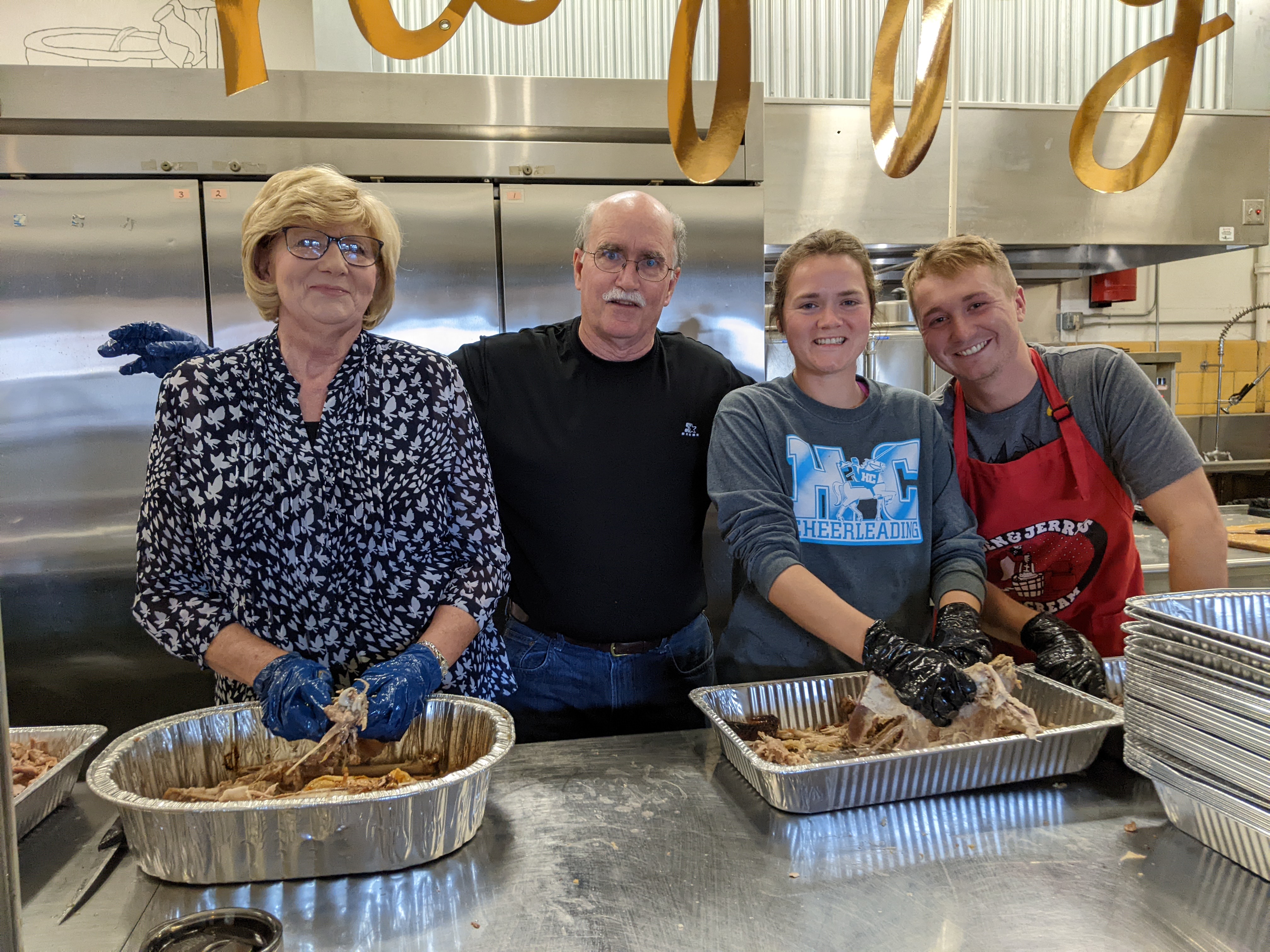 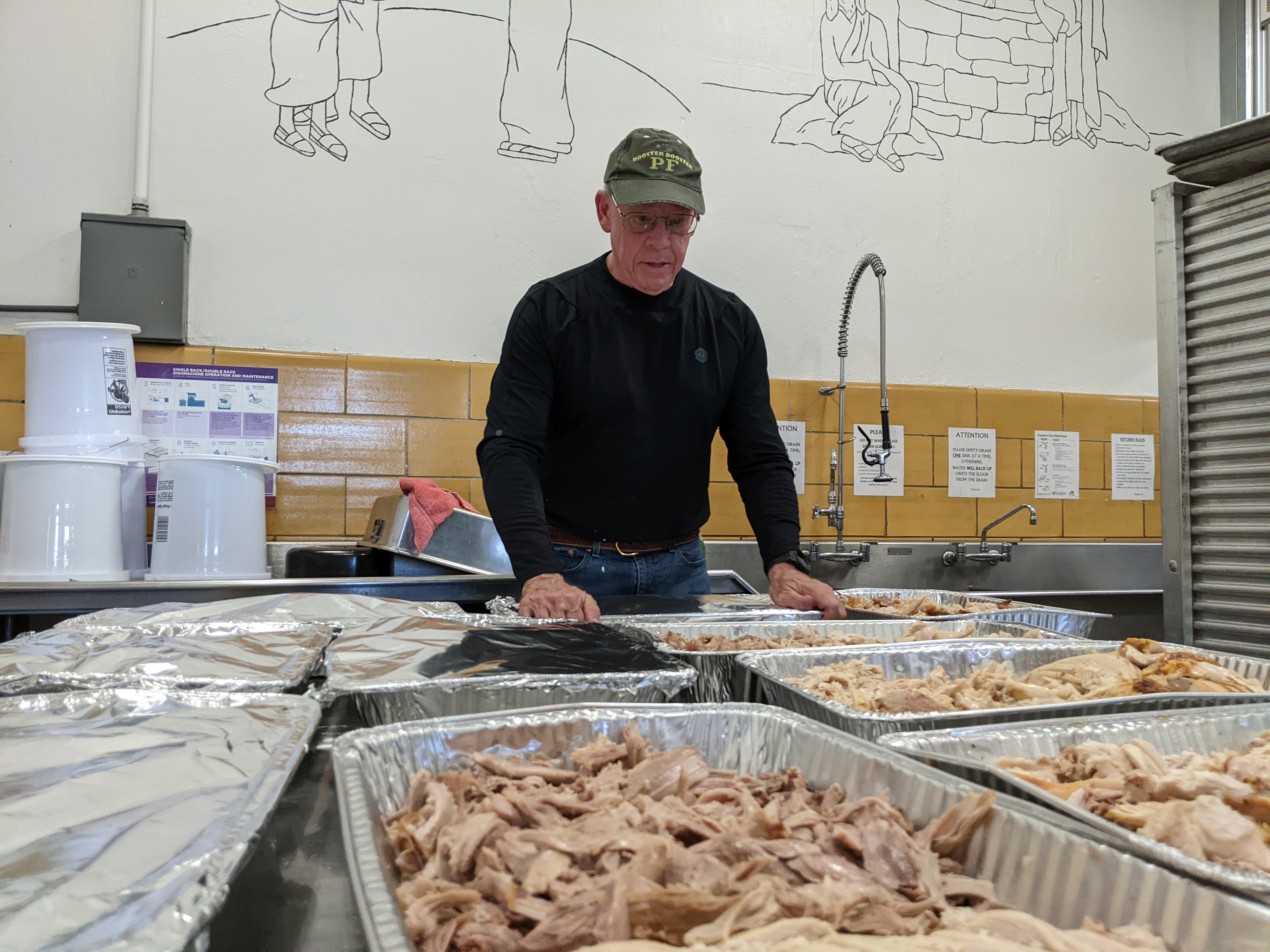 Ryan Pivoney/News Tribune photo: Bruce Ring wraps prepared turkey and gravy in foil for the Thanksgiving meal Immaculate Conception Catholic Church is offering Thursday, Nov. 24, 2022. Ring, the former owner of a Zesto Drive-in and a champion barbecuer, was the head cook Sunday and said thawing the 926 pounds of turkey meat was the most difficult aspect of preparing 50 whole turkeys. 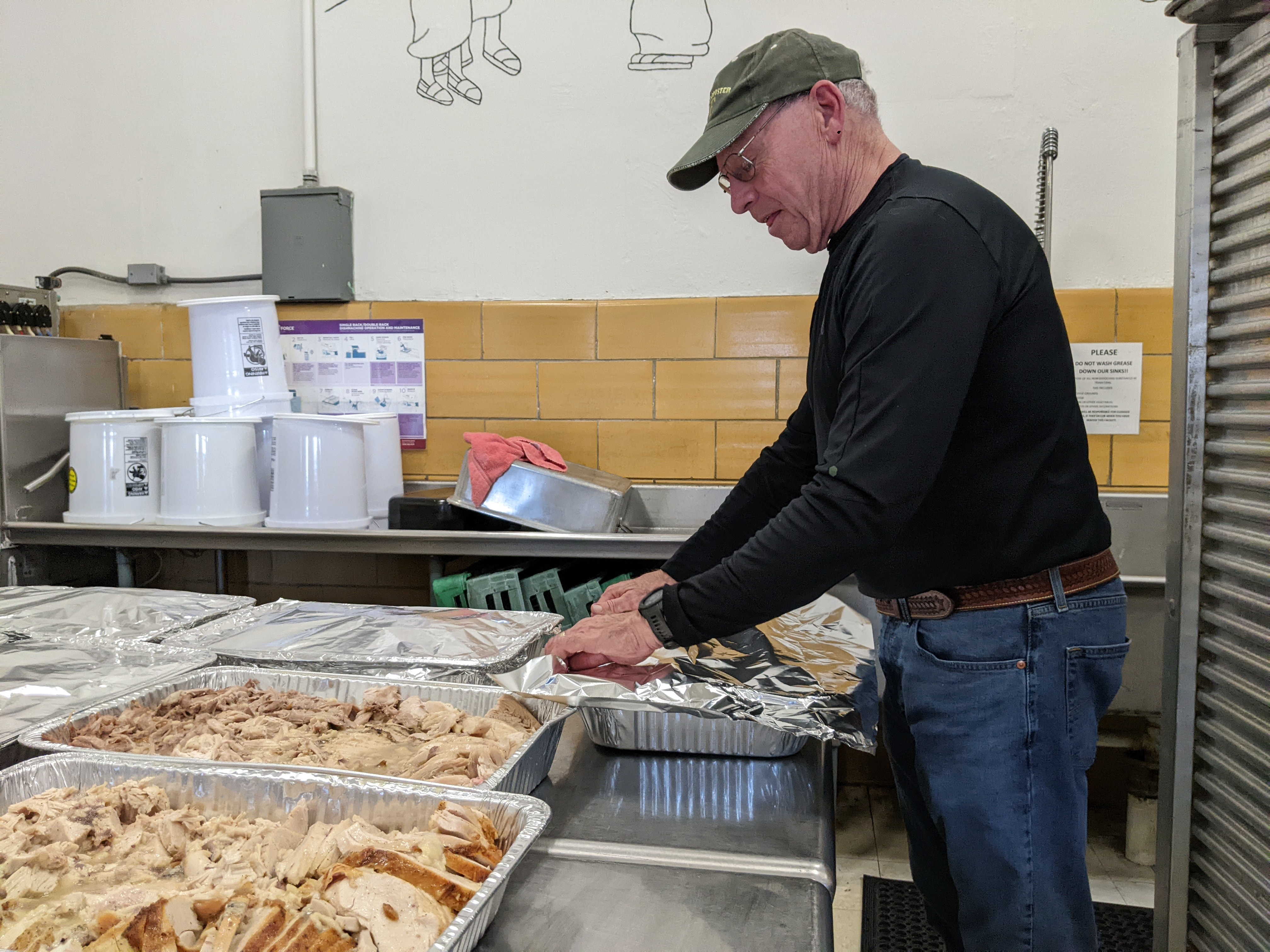