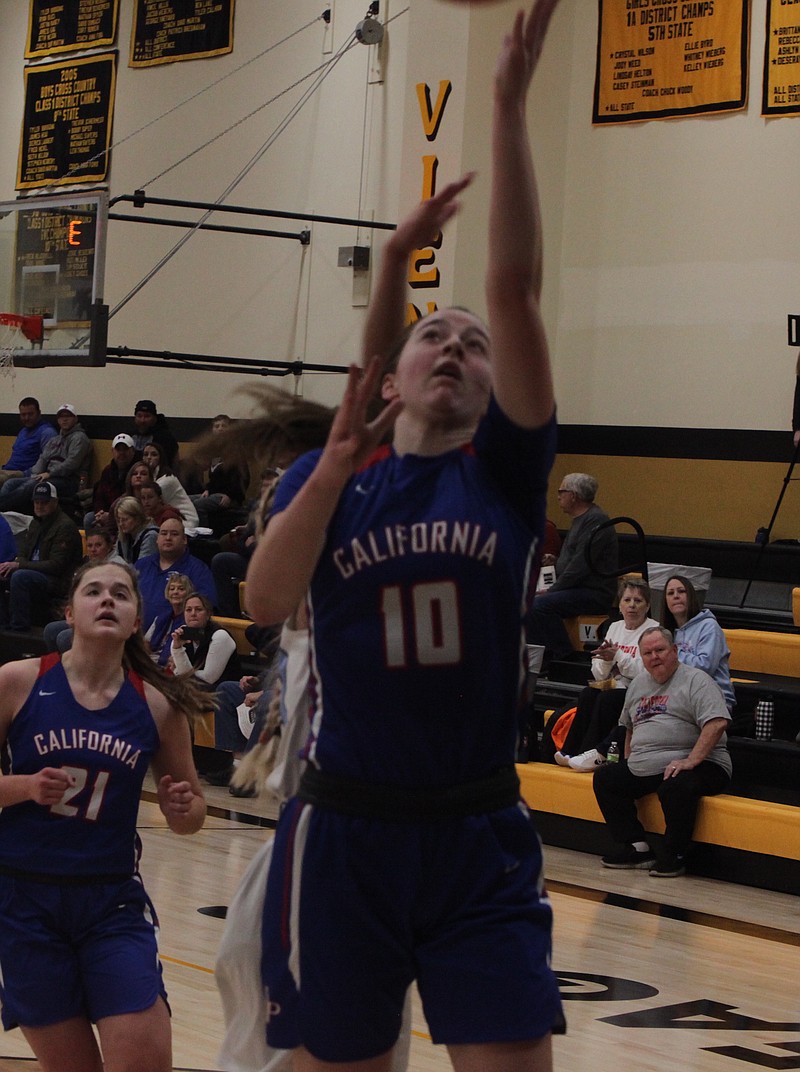 Senior forward Lauren Friedrich soars to the rim for a layup off a steal. Friedrich had a game-high 23 points.(Democrat photo/Evan Holmes)

California Lady Pintos basketball returned for a new season on Saturday morning when they took a trip to Vienna to take part in the first annual Vienna Eagles Shootout. California's opponent at the shootout was the Salem Lady Tigers. It was not a clean game for the Lady Pintos, but with the help of their defense and two big scoring runs in the first and third quarters, California managed to pull away from the Lady Tigers, winning the shootout game over Salem 71-38.

"I'm very happy with our girls for how they came out with their energy and their effort. Their ability to handle adversity today helped us out and this is a great step one for us," Head Coach Bobby Sangster said.

Sangster's starting lineup for the season opener consisted of senior Alayna Butts and junior Penelope Cotten as the guards in the back-court, with senior Lauren Friedrich and junior Isabelle Rohrbach at the forwards, and junior Ella Bailey as the starting center.

The Lady Pintos won the opening tip and Rohrbach scored California's first points of the season on an uncontested layup eight seconds into the game. California turned to a full-court press defense and Salem was caught off-guard. Using the press, California took off to a 14-0 lead with 5:26 to go in the first quarter.

However, the early double-digit lead came with a drawback. The Lady Pintos began to gamble more and more on defense, which got them into early foul trouble. After Cotton was yanked to the bench with her second foul, California was in the penalty and sending Salem to the foul line. The Lady Tigers clawed back into the game and cut the California lead to three. Friedrich built the lead back up nine after hitting a three-pointer from the left corner at the end of the first quarter.

"It was a great run. Although, I'm a little concerned about the lull we went into afterwards, but that's something that we've got to adjust. We've got to help each other out in the first few minutes," Sangster said. "If you're not ready for that initial burst, then that can jump on you. Salem did a great job of regrouping themselves after that by pressuring us and making their free throws. They put us in a spot where we had to rely on a bunch of people because of foul trouble."

With the Lady Pintos in the penalty for the entire second quarter, Salem took advantage by making 10-16 free throws in the first half. In addition to the foul trouble against California, both teams struggled with turnovers. Sangster said that the biggest reason for California's turnovers was the team's passing, it was not sharp. Fortunately for the Lady Pintos, t led 33-20 at halftime.

Although they were again troubled by fouls and turnovers in the second half, California's defense maintained its aggression and Salem was unable to handle the pressure of California's press defense. The Lady Pintos forced nine turnovers in the third quarter and went on a 9-0 run midway through the quarter to go up by 21. With Friedrich scoring eight points in the third quarter.

Up 53-33 at the start of the fourth quarter, California put the game on ice when junior Hailey Rademan hit four straight shots in the first three minutes of the quarter. The Lady Pintos outscored the Lady Tigers 18-5 in the fourth and came away with a 71-38 victory over Salem.

"There are some things we've got to clean up, but these girls have very large expectations for themselves. They understand our program's standards and they're willing to pay the price. When you have those things in play, you have the opportunity to be very competitive," Sangster said. "Salem had some struggles tonight and we wish our best to that Savannah Manthey girl they have. She had a procedure earlier this morning. So they were a little shorthanded without her and she makes a big difference for them. Our thoughts and prayers go out to her."

Friedrich had a game-high 23 points on 9-15 from the field, with five rebounds and a block. Rademan had 13 points on 5-7 from their field with two assists.

For Salem, seniors Ashton Bowers and Erway combined for 30 of the Lady Tiger's 38 points.

Even though California did not play a fluid game on Saturday morning, Sangster thought that the win was a good step in the right direction for the Lady Pintos. Now California will go back to the drawing board and watch film to get themselves prepared for game two against Centralia.

"We knew that a lot of things that we could control, we weren't. We weren't boxing out well on the glass at either end. We knew that our passing was just atrocious in the first half. The girls were very upset at themselves about their passing, but they did a great job of making the mental and physical adjustments to fix that," Sangster said. "When you start cleaning up and adjusting your games after learning from your errors, good things can happen. Good things happened for us in the third quarter and we were able to pull away. I think it's going to be fun to watch what we did make mistakes on today, how we can fix those mistakes, and how we can improve ourselves going in the Centralia's den on Monday."

California now moves on to the Tipton Tournament on Nov. 28, where they will play New Bloomfield in the first round. 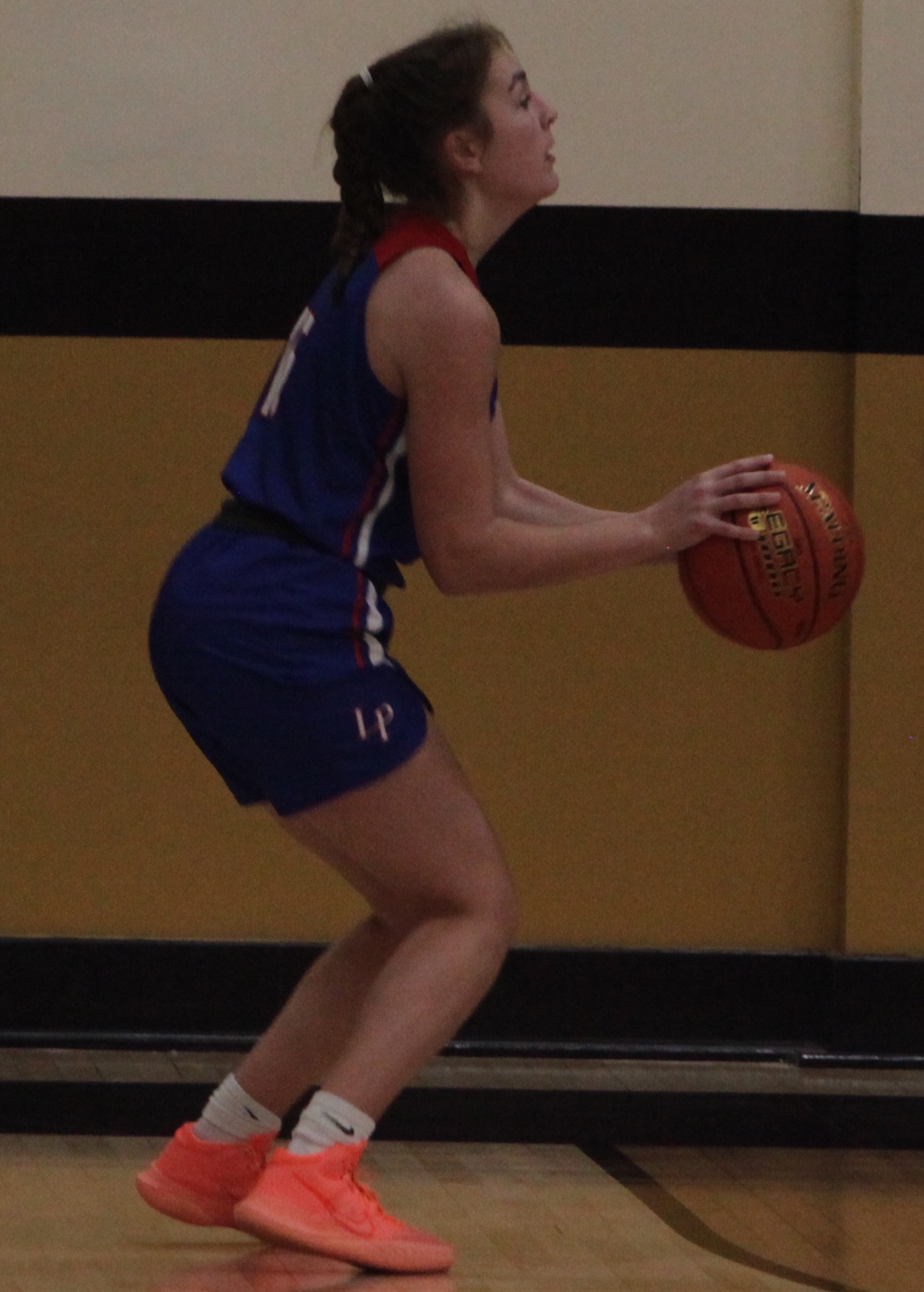 Junior guard Hailey Rademan went 4-4 from the field in the fourth quarter on Saturday morning and finished the game with 12 points. (Democrat photo/Evan Holmes) 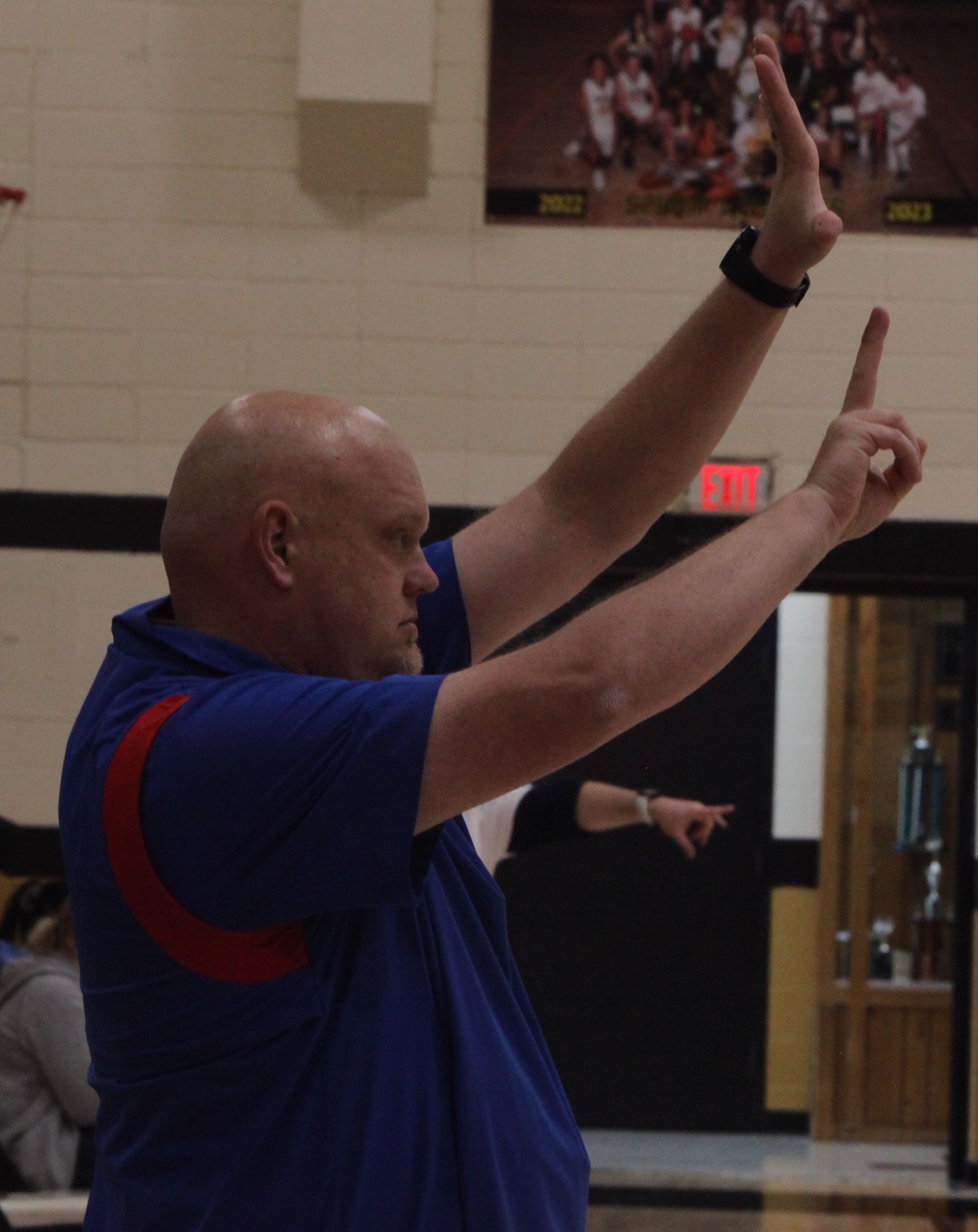 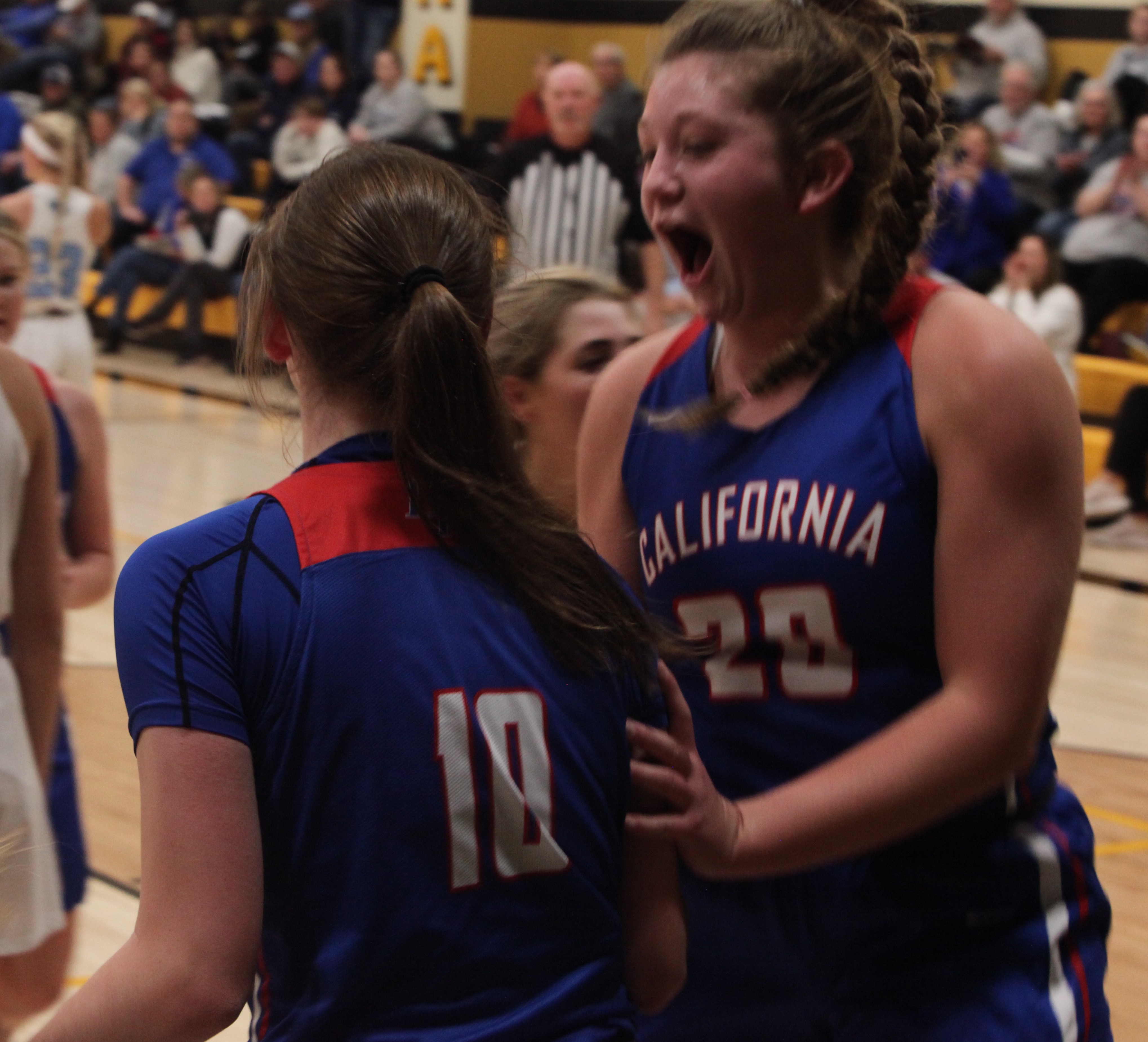 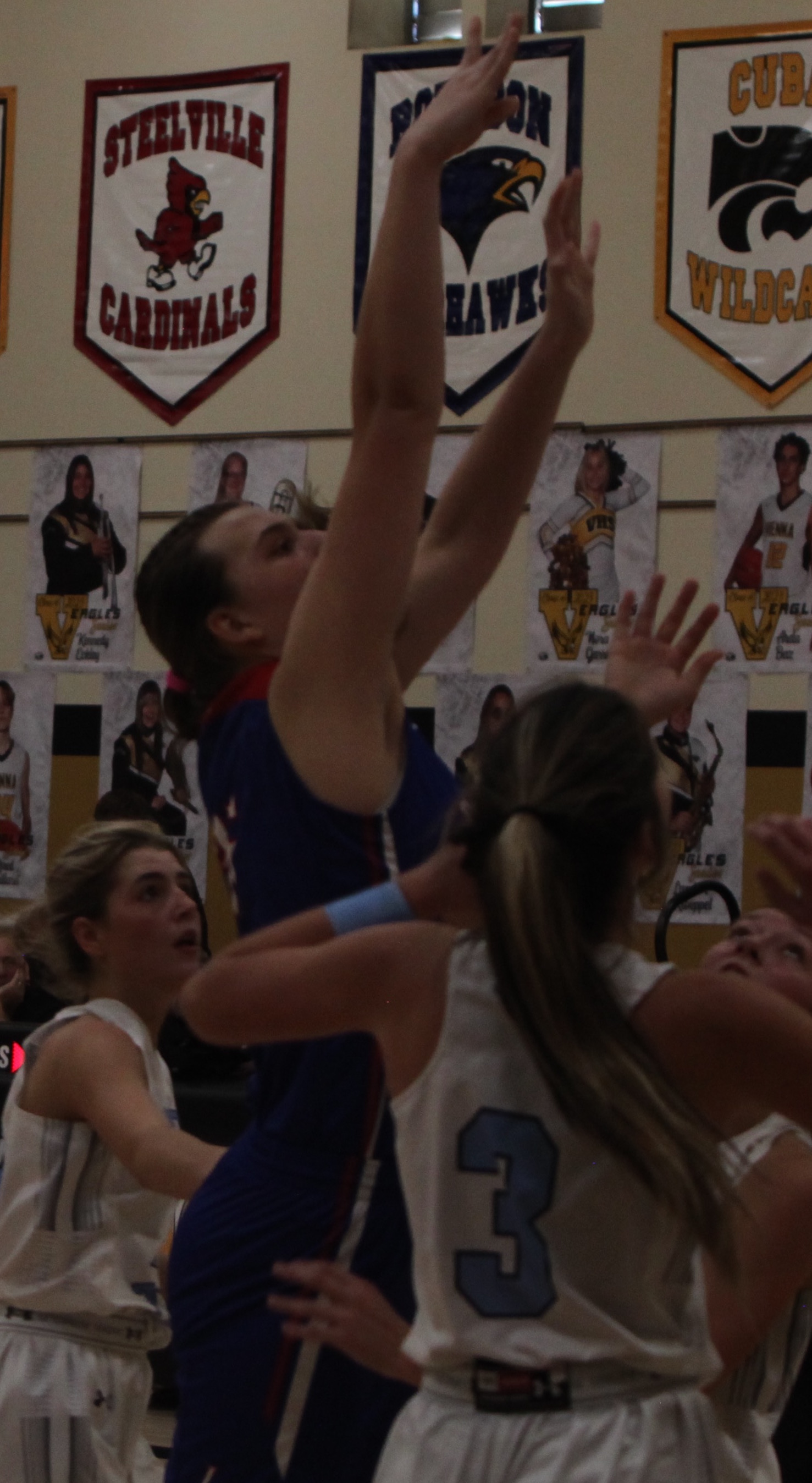 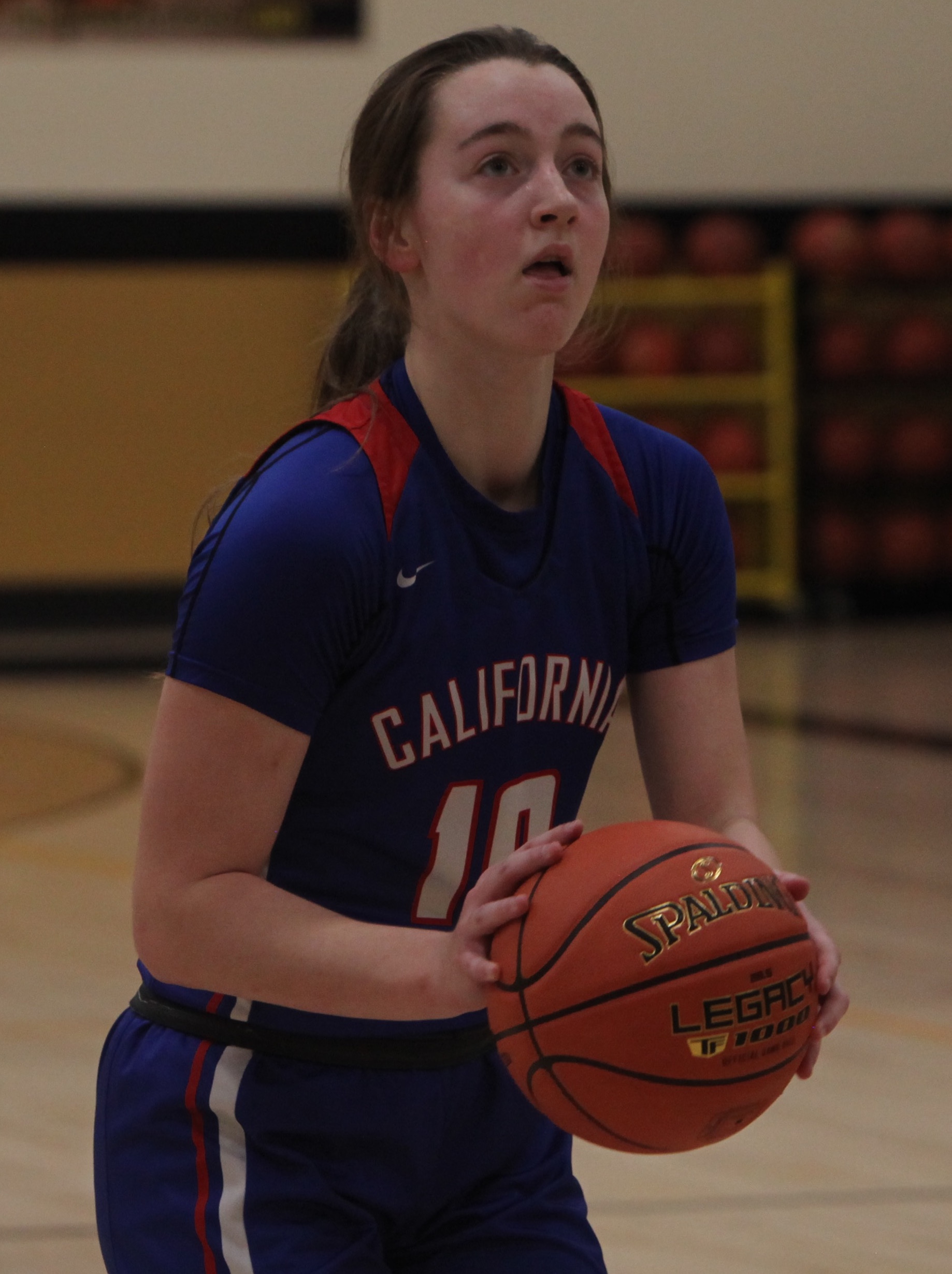 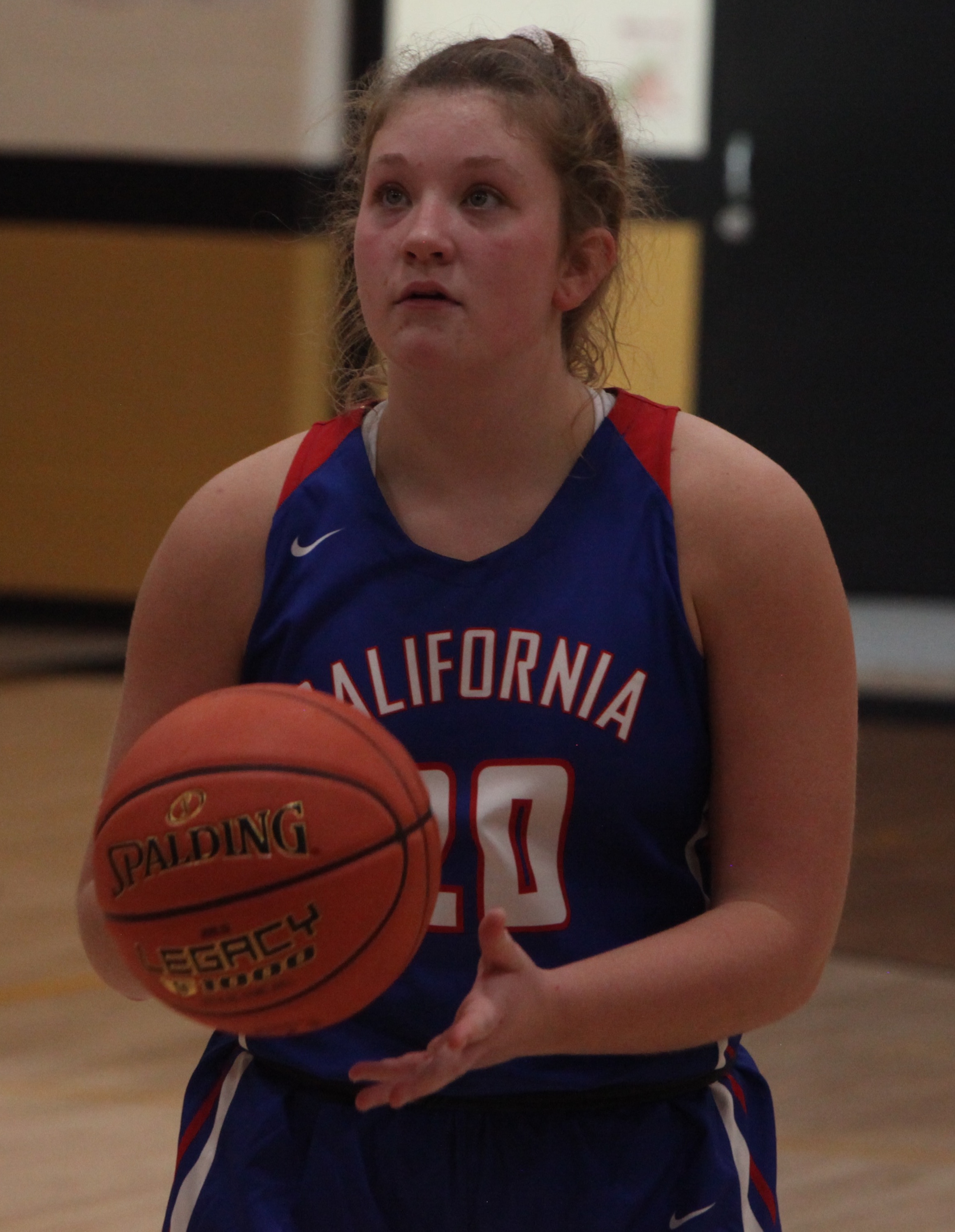 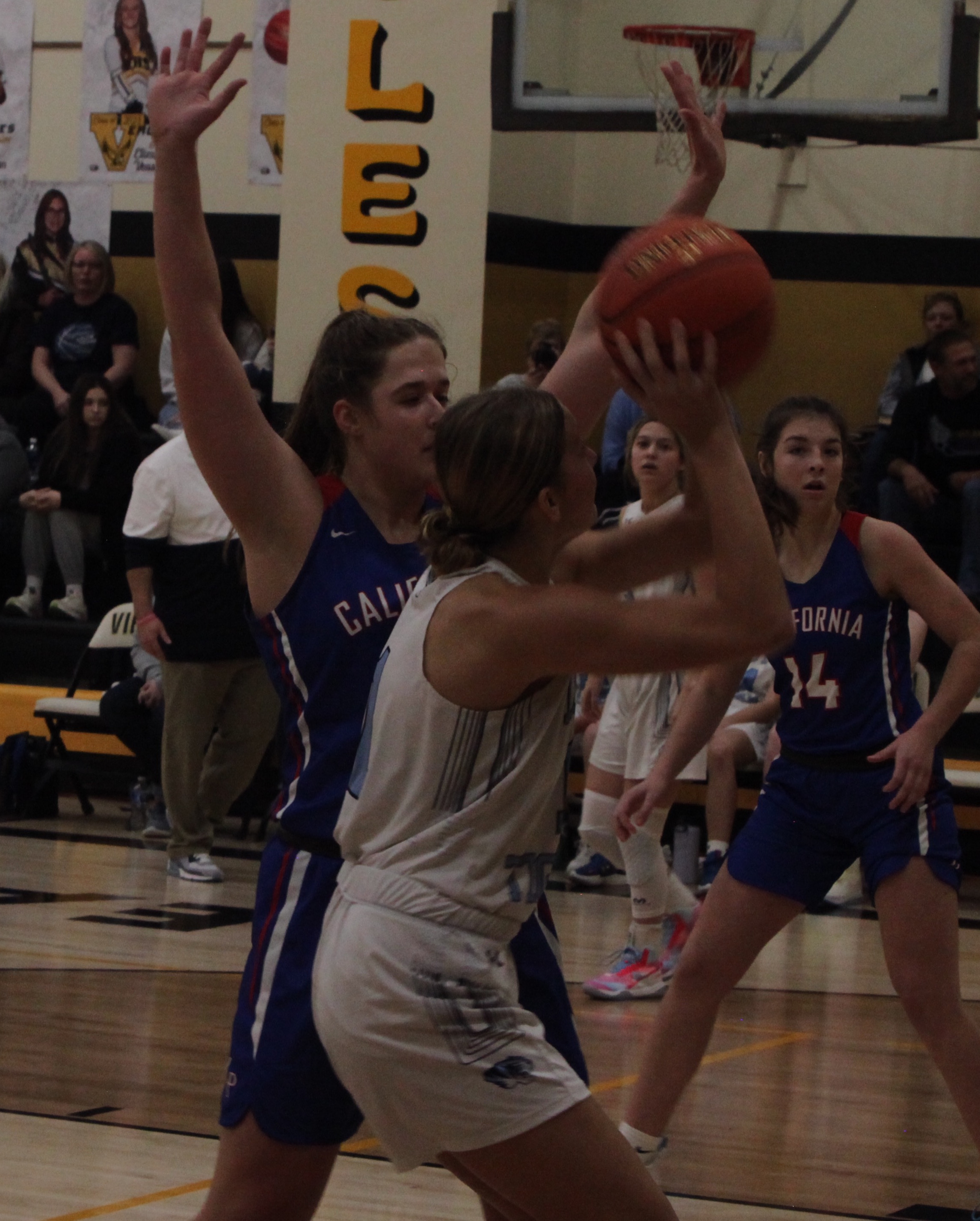 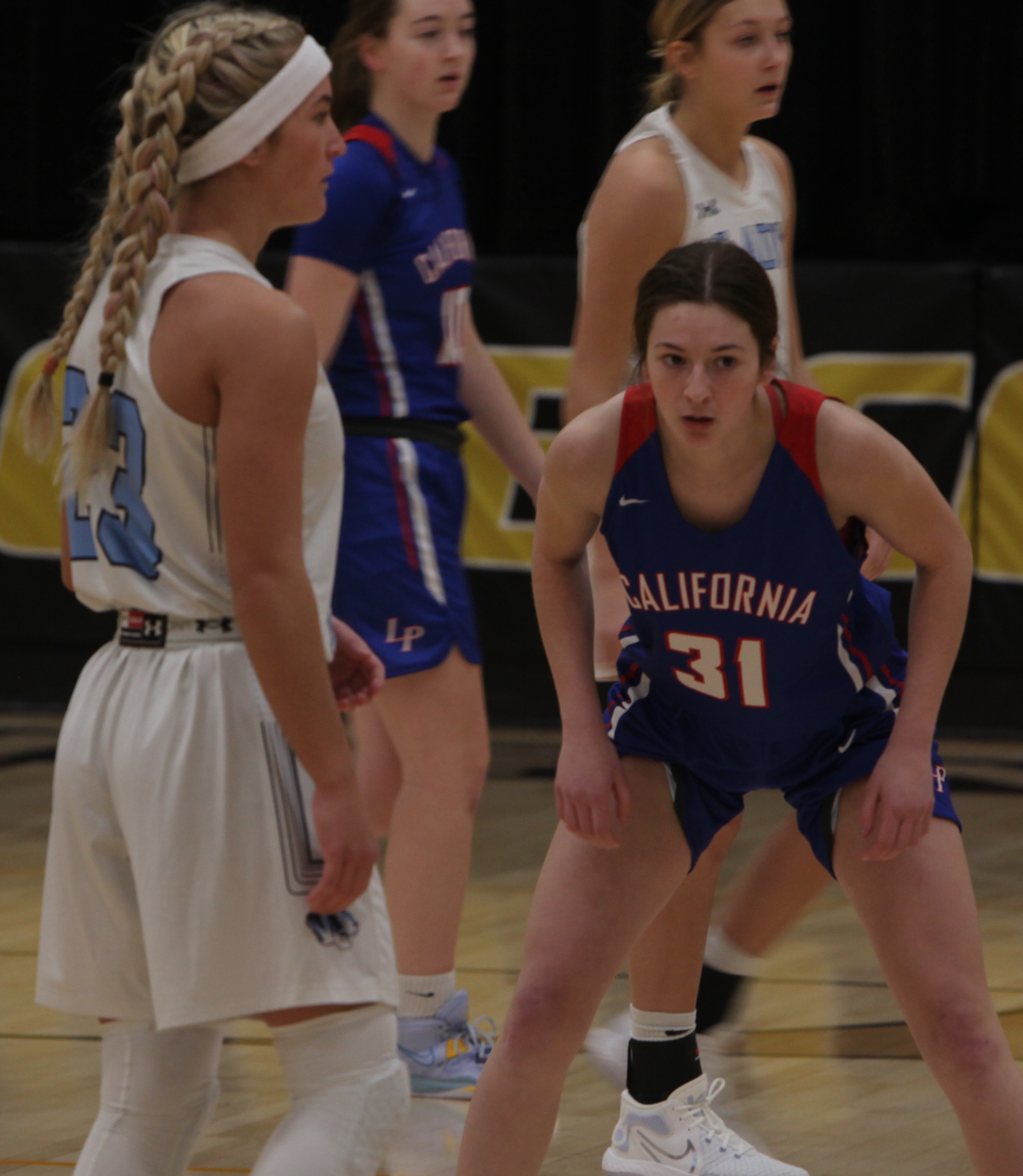 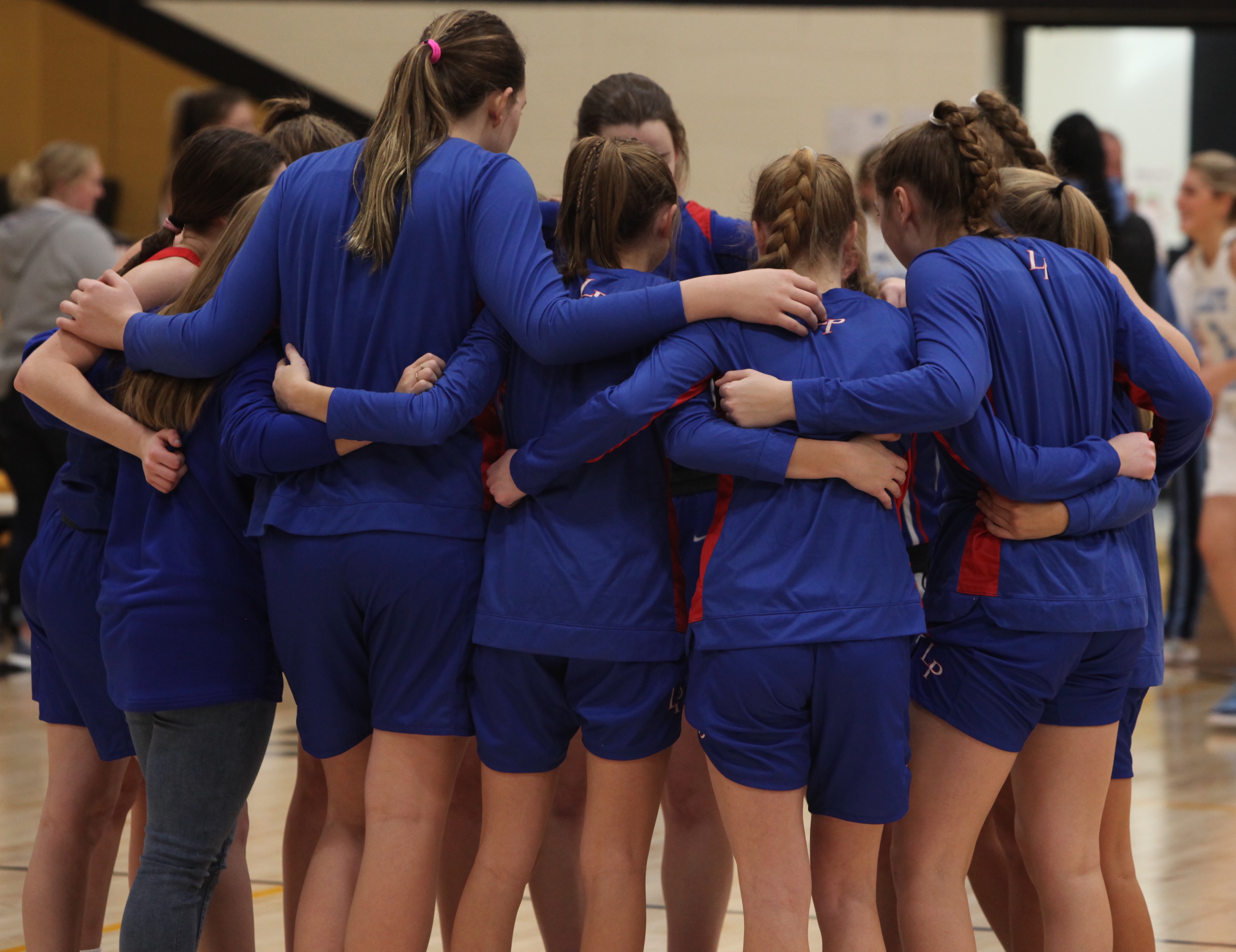 The Lady Pintos hold a team huddle before the opening tip against the Salem Lady Tigers. (Democrat photo/Evan Holmes)