Duds into suds: Failure turns into rewards for local entrepreneur 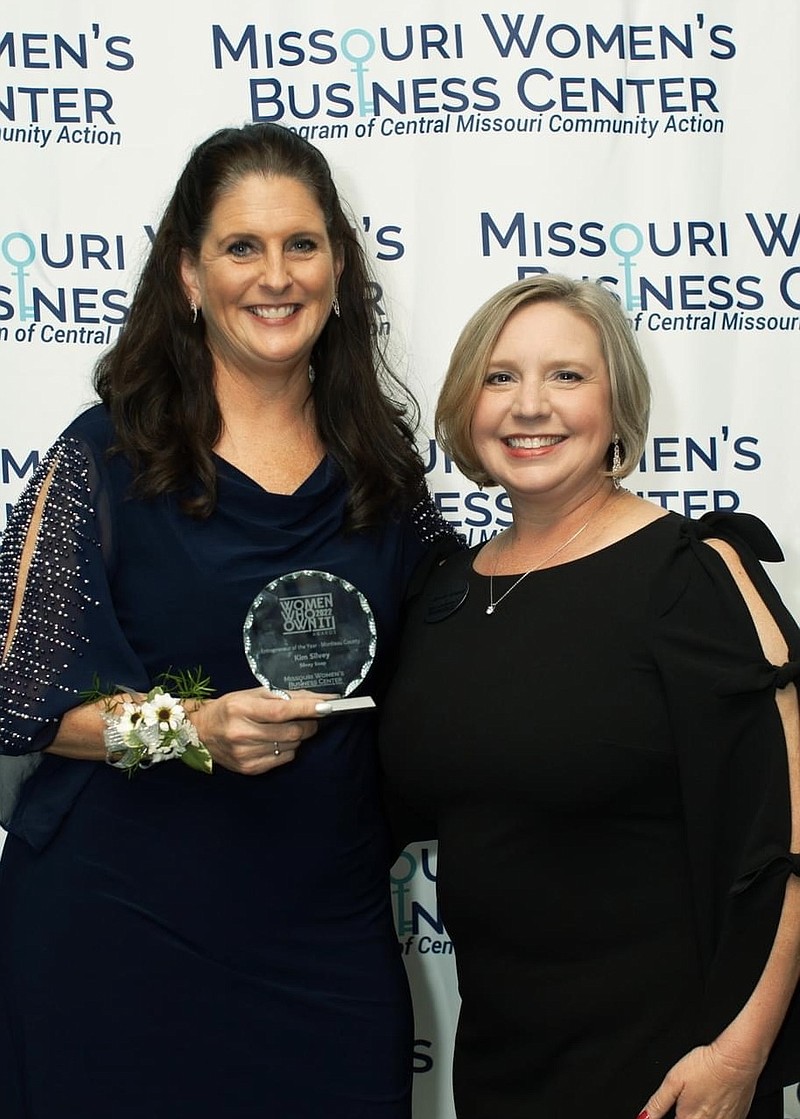 Submitted — Kim Silvey, left, poses with Jennifer Schenck, a business coach at the Missouri Women's Business Center, after being named Moniteau County's Entrepreneur of the Year for 2022 on Nov. 10 at the Elks Lodge Event Center in Columbia. Schenck will be working with Silvey, owner of Silvey's Soaps, on growing her business.

If you would've told Kim Silvey that she'd own a soap-making business a decade ago, she wouldn't have believed you. However, that's exactly what happened.

Kim Silvey, owner of Silvey's Soaps, established her soap business more than two years after she refused to concede to a failed batch of soap. Silvey was recently rewarded for her perseverance and entrepreneurial spirit by being named Moniteau County's Entrepreneur of the Year for 2022 by the Missouri Women's Business Center (MoWBC) during its fourth-annual Women Who Own It Awards show.

Silvey said she was surprised at receiving the award and felt like the "small fry" at the award show, held Nov. 10 at the Elks Lodge Event Center in Columbia. While many entrepreneurs at the event are listed on Amazon or have shipped internationally, she sells her soap online through a website she made herself and through boutiques around Missouri.

Jennifer Schenck, a business coach with MoWBC, nominated Silvey for the award after meeting her following a speech she presented at the Central Missouri Leadership Breakfast. As a coach, Schenck will help Silvey take her business to the next level after she retires from her full-time job as an art teacher at North Elementary School in Holts Summit.

"I think there's a lot that I can do that I haven't done just because I'm working full time," Silvey said.

She said the event was not only a great networking opportunity, but also an inspiration.

"It was very inspirational because I met a lot of people there that we can network together and some places who want to carry my soap in the future," she said. "It was inspiring to hear everybody else's story, how they got started and what their story has been."

Silvey's own story began in September 2015, when her first batch of soap failed.

"As (an) art teacher, I'm always doing creative things, and so I made a batch of soap and it didn't work," she said. "It was a disaster and that kind of made me mad, so I just kept doing it until I got it the way I wanted it. Then my husband liked it, my family liked it, I gave it away to friends and family, and at a certain point I thought 'I'm going to try to sell it.'"

Silvey said she took her business online after taking the LaunchU course offered by the Moniteau County Regional Economic Development Council (MRED). She said the end of the course coincided with the beginning of the COVID-19 pandemic, allowing her time to learn how to build the site.

"(The LaunchU class) taught me all about the accounting aspects, is this going to work, flow sheets, your cash flow, insurance," Silvey said. "... Because I was just selling soap at the farmers market, not thinking about (how) I needed all this stuff licensed."

Silvey's Soaps products can be purchased at www.silveysoap.com, or locally at Winding Road, 324 S. Oak St. The products are also stocked at the Jefferson City Hy-Vee, Bella Boutique in Eldon, MindRight Wellness in Columbia, Garriott Porter Art Studio in Fulton and Kru & Co Boutique in Osage Beach, along with boutiques near Kansas City and St. Louis.

"I couldn't do (this) if I didn't have customers," Silvey said. "I try to take care of them and they take care of me."