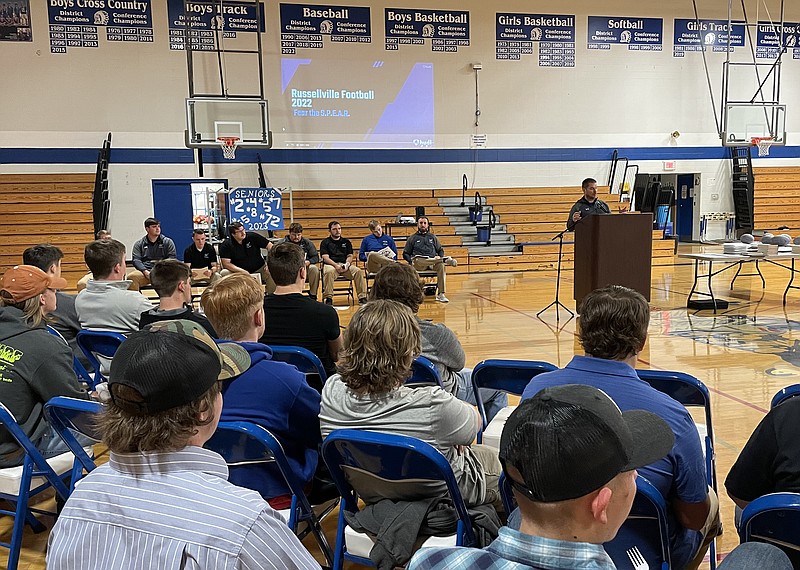 In only its third season as a program, the Indians made a statement to the Missouri football world they were a team to be feared. Under the direction of head coach Timothy Rulo, Russellville won eight out of ten games, including a win over Crystal City at the Homecoming game in the final seconds.

When Rulo first took over as Russellville's head coach, he said one of his long term goals was to make Russellville a better team every year and build a winning tradition, just as Russellville baseball and softball have. Today, Rulo says the 2022 Indians team has helped the young program to blossom into becoming a household name.

"Going into the season, we were looking to play our hearts out every night and get better each week. We really felt like the offense and defense made huge strides this season. The growth that we saw in the players was outstanding," Rulo said. "Our team, especially our seniors, talked about wanting to have a winning record this year and hosting a home playoff game. We definitely feel like we surpassed our goals for this season."

Now that the 2022 season is in the books, Russellville has spent the last few weeks reflecting on the run that they have had and how they can take the next step in 2023. Rulo said that it has been a great season for not just Russellville, but for him as well. For Russellville, there are a couple of things that could've gone differently, particularly in the Class 1 District 5 quarterfinals against Fayette, but Rulo says that he has enjoyed every moment of the season and he's going to celebrate the 2022 season for a long time.

"Every season and every win is special, but our biggest win this year was when we beat Crystal City on Homecoming Night when we made a goal line stand to win. That was amazing," Rulo said. "There are always things that in hindsight you would want to do differently. In the end, we are just honored that we were able to coach these guys and be a part of the history making season here at Russellville. This will definitely be one I will not forget."