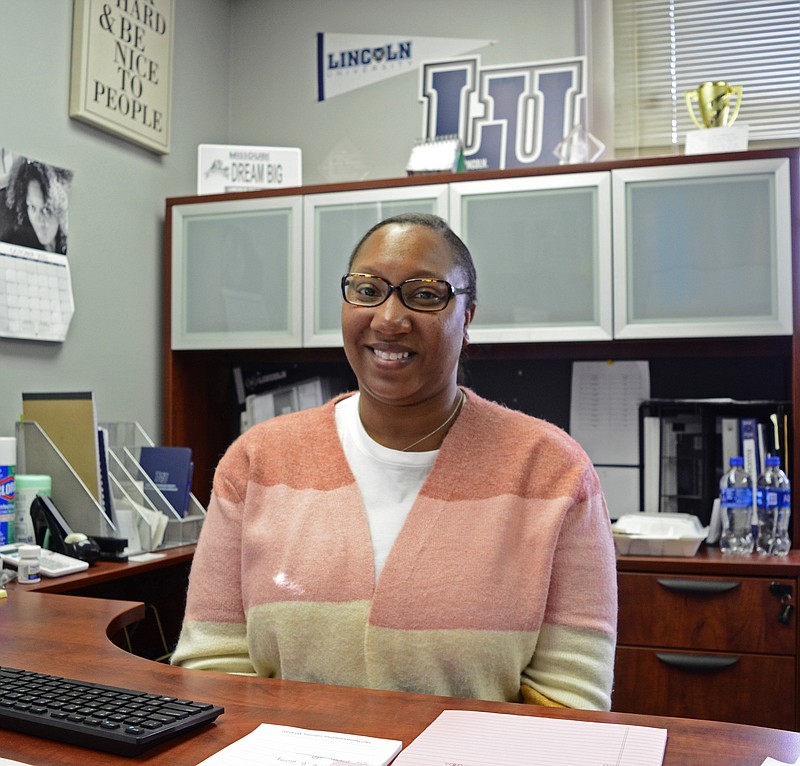 In roughly three months on the job, Lincoln University's director of admissions and recruitment has brought excitement and experience to an area of campus that has historically struggled.

"I want people to feed off of my energy," she said. "It's easy to get excited here."

She was born and raised in Champagne, Illinois, a college town home to the University of Illinois Urbana-Champaign and Parkland College. As a low-income, prospective first-generation college student, Williams participated in academic support and mentorship programs at the two institutions and said she practically grew up on the campuses as she spent most summers there. She stayed in residence halls, ate in the cafeteria and even got a taste of college social life.

Looking for a change of pace, Williams went to Fisk University for her undergraduate degree. After attending graduate school elsewhere and working for the government, she returned to the university for her first foray into a career in higher education.

She said her upbringing shaped her move to higher education.

"I didn't realize it then but I do think so because my college journey really did change my life," Williams said. "Choosing the school that I chose, being in a small atmosphere, having professors and individuals on campus who I connected with and who kind of helped push me along the way, now I remember that as I pour into other students coming in."

"I can definitely relate to the first-generation, low-income students and how college can change that for them," she continued. "It can really just change the landscape of their entire family."

Williams said she initially thought she wanted to join the student affairs office when she returned to Fisk so she started working in residence life. She found her way to the admissions office after about three years and began working as a remote recruiter visiting schools, graduations, graduation parties and churches.

"Wherever I could go to kind of work my territory and meet the students, the parents and counselors, that's what I did," Williams said. "I think that really helped me, now that I'm a director, really pour into my staff and say it's about relationship building."

Lincoln more than doubled its admissions and recruitment staff over the past year as it added remote regional recruiters in St. Louis, Kansas City, Mid-Missouri, Chicago and the Bootheel. It brought the staff from three to eight.

And for the first time in a decade, Lincoln had an increase in enrollment this fall. It was a 2 percent increase.

Williams said she inherited a vibrant, experienced two-person staff when she joined in July, and she's been interested in fostering those qualities into the future with plans to double or triple the size of the office.

Where Williams shines best is in the admissions office, she said. She enjoys working on internal solutions to recruitment challenges and getting involved with other parts of campus. She maintains an open door policy and a smile to greet whoever enters.

"In the past, a director of admissions is pretty tied up doing all things admissions and recruitment," Williams said. "But because we're so efficient here, it allows me to be at the table and in a lot of those conversations so I know how everything works at Lincoln, and I can better sell and promote. It feels good to be included."

Lincoln has an opportunity to reach further into the various student populations on campus, such as international and commuter students, Williams said, which requires learning more about what brings those populations to the university.

Many Lincoln students come from under-served and unprivileged areas, she said, which comes with a different set of recruitment challenges.

College can change family structures by, say, removing an older sibling who would typically babysit a younger brother or sister, she said.

"You have to be somebody, in my position, who cares about that because you don't want to disrupt in a negative way a family dynamic, but you also want to present this opportunity," Williams said. "In the long run, this will really pay off not only for the student but their family."

Jefferson City has been a great transition from rural Itta Bena, Mississippi, Williams said. She said she's still exploring the area but enjoys the local shopping and cuisine, as well as diving into some local organizations, particularly those involved with professional development and community service.