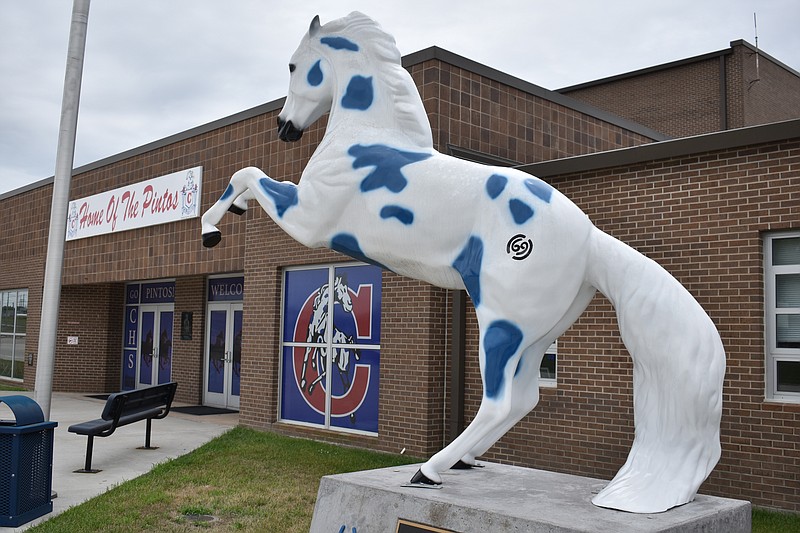 Democrat photo/Garrett Fuller — FILE — The California R-I Board of Education discussed a proposed archery program and changes to administrative reports at board meetings at their October meeting Oct. 19 in the California High School media center. The board will meet next at 6 p.m. Nov. 16.

A new archery program may be coming to California's middle and high schools soon.

The proposed archery program and administrative reports at board meetings were two highlights from the October California R-I School District Board of Education meeting held Oct. 19 in the California High School media center.

The proposed archery program dominated the new business portion of the meeting. Teachers Jennifer Porter and Kayla Stewart, and high school Principal Jeff West, presented information about archery programs in schools, along with a survey completed by high school students.

Stewart said archery might interest students who aren't invovlved in other programs offered at the schools. Archery is already taught in physical education classes at middle and high school levels, enabling the program to be recognized by the National Archery in Schools Program (NASP). She said NASP requires archery to also be taught in physical education courses for the program to be recognized.

"When we do (archery) in PE class, there's a lot of kids that maybe don't like PE, but as soon as we do something like this their attitude is completely changed," she said.

"Kayla reached out to me in March-April," she said. "Where she came from, she coached archery and just kind of talked to me about 'Could we get something going here?'"

Stewart said she is interested in coaching at the high school level. The school would have to find an addtional coach, whom the Missouri Department of Conservation would train.

Porter said the district has the equipment, facilities and interest needed to start a program. She identified two locations for practices: the middle school gymnasium, which she said isn't used after school in January and February, and the high school courtyard.

Porter said participants would need two to three hours of practice per week.

Although Porter and Stewart wished to have the club officially sponsored by the district, Superintendent Daniel Williams suggested keeping the club separate initially because of financial and other issues.

"We don't have a very optimistic financial outlook for the next year or two as a district, so I worry about adding an additional expense to the district knowing we're already in a spot where we could be deficit-spending and are, this year, currently," he said. "I think my focus and my recommendation is that we probably focus on maintaining the programs that exist rather than taking on an additional expense."

Williams explained the district would be required to pay for coaches, supplies and transportation if it became a student activity sponsored by the district. He also voiced concerns over fundraising and control.

"I think remaining independent of the school, initially at least, is a good thing where I look at one of the fundraising ideas is a gun auction, which we as a school district cannot be a part of, so that opens up latitude where have no control, no say, really don't want to be a part of making decisions for monies that we don't control," he added. "Gives you better latitude as your own private group as to what you do to raise your funds."

The archery program will not be a school-sponsored activity at this time, but board members said students could use district equipment and facilities for archery.

In other action, the board considered streamlining presentations of administrative reports.

Williams said he value administrator and visitor's time and could use it better. He said administrators attend many events, and that if board meetings ran more smoothly, they wouldn't be there as late.

Despite concerns about how late meetings run, Williams suggested board members set aside time during meetings to hear presentations about programs and individual departments.

He said a previous district he worked at rotated presentations between building administrators monthly. The board determined that administrators will not make monthly presentations, but would continue to provide written reports and answer questions at the meetings.

While Williams and others felt the administrator reports wasted time, Paul Bloch, a board member, disagreed.

"I get a lot out of the reports from the principals, and I usually ask questions," he said.

Bloch suggested members could simply ask questions before the meeting to save some time.

"Susie (Gorrell, board secretary) will tell you if I have questions about checks or things like that I ask her before the meeting to get it out of the way. We could cut some of our time out that way," he said. "And, yes, we do have to make (building administrators) come in. But this is kind of important what we do here. And I think they all understand that; They might not want to come in, but I think they need to."

Bloch said the board has become increasingly isolated from administrators, faculty and staff. He said there used to be groups present at every meeting.

"I don't have that daily interaction that comes home to me to let me know about what's going on in the school," VanLoo said. "So without communicating directly with one of you or Mr. Williams or Susie, I feel that disconnect as well."

West presented a report about the Jobs for American Graduates (JAG) program at the high school. Jordan Bruns, a high school student who won the JAG essay contest, will attend an essay reception Tuesday at the Governor's Mansion in Jefferson City.

The California R-I School District Board of Education will meet next at 6 p.m. Nov. 16 in the CHS media center.