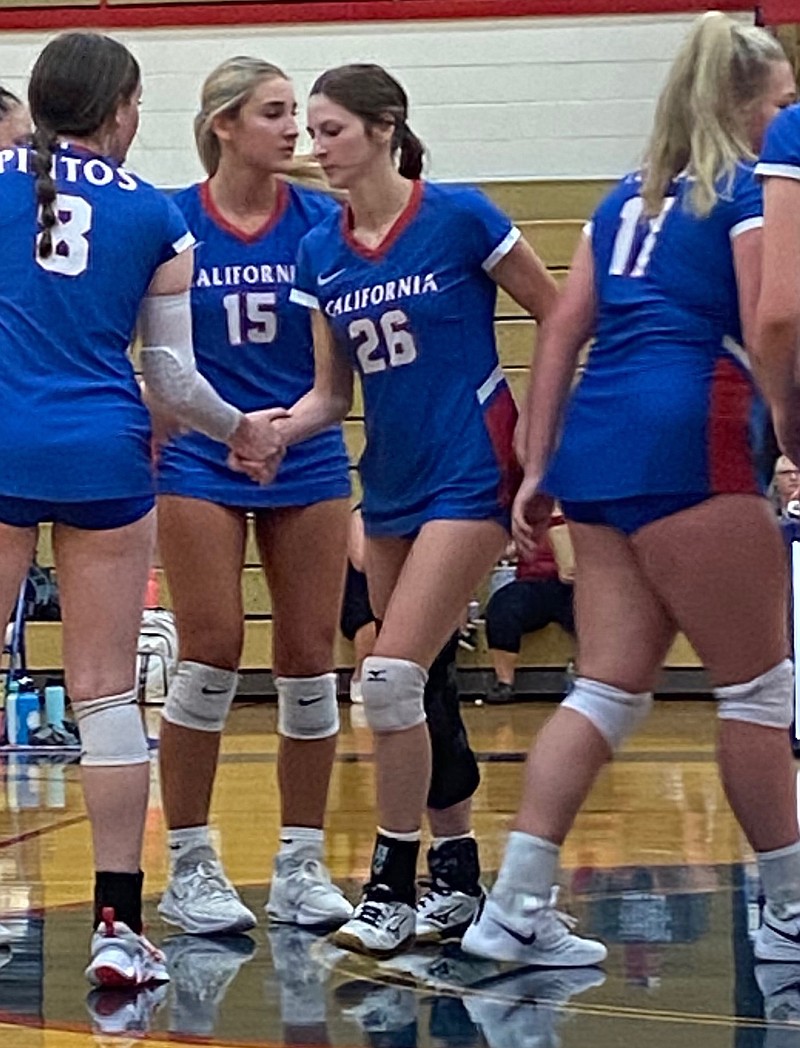 Junior Penelope Cotten gets a spike point for the Lady Pintos against the Lady Bulldogs. (Democrat Photo/Evan Holmes)

The California Lady Pintos opened the season with two matches last week, one against a rebuilding team and the other a Tri-County Conference and district rival.

California wasted little time in getting its season off on the right foot, defeating the Mexico Lady Bulldogs and Boonville Lady Pirates in straight sets to go to 2-0.

In their first match against Mexico last Tuesday night, the Lady Pirates went against a Lady Bulldogs team who was looking to bounce from winning just four matches a year ago.

Head coach Julie Bailey admitted she thought her team was nervous coming in the match. As a result, California gave up some points to Mexico on mistake plays like bad serves that were either too short or too long.

After winning the first set 25-13, Bailey used the intermission to address her team and put to rest the team's anxiety. The words showed their effects for the rest of the match. In the following two sets, California didn't give Mexico any second chances. The Lady Pintos went on to sweep the Lady Bulldogs 3-0 by winning the second and third sets 25-8 and 25-10.

"I think we came out maybe a little nervous and had those first game jitters. We made a lot of unforced errors in the first set. I think I looked up at the scoreboard at one point and all of their points were from our unforced errors. They made some bad passes off services and we had some balls go off of our kids. That normally doesn't happen," Bailey said. "They called a timeout and I talked to the girls about cleaning that up. And then from that point forward, for the rest of the night, I felt like they did. They fixed all that and got those jitters out of the way and then they were ready to go."

Two days later, it was game time again for the Lady Pintos. This time, they would be up against a familiar foe in conference rival Boonville.

California had won their last seven matches against Boonville dating back to 2016 and looked to make it eight.

"I'm lucky to coach them, because I have a lot of athletic girls whose spend a lot of time outside the season playing club ball or just doing athletic things," Bailey said. "They're not sitting at home on the couch. And even if they're not club volleyball players, they're on the basketball court all the time getting better. When you improve athleticism, it helps in any game you are playing in. So I've been lucky to have really great athletes."

But beating this Lady Pirates team on the road would be no easy task. Boonville had also made improvements in their off-season and were now in their second year under the direction of coach Brittney Lowe and led on the court by front line hitter and blocker Madison Smith.

After the freshman and junior varsity both won their matches with Boonville 2-0, it was time for the varsity team to hit the floor.

Unlike Tuesday's match against Mexico, there were no jitters for California and they quickly jumped out to a 13-6 lead in the first set led by the front-line presence Lauren Friedrich and Isabella Kincaid. But the Lady Pirates would not be deterred.

Smith led the Lady Pirates back into the set with four blocks on the next nines plays. With two of them leading to points. Within just minutes, California's 13-6 lead was cut to 21-17. But form that point on, senior Emma Whitson put to rest any further doubts. California scored four of the last five points of the half with Whitson earning a block, an assist, and a kill to win the first set 25-18.

In sets two and three, California once again jumped out to an early lead and refused to relinquish it. And once again, it would be Whitson who took center stage with Kincaid as her right hand lady. With Whitson made the final kill of the match, California won both set two and three by the score 25-14.

Bailey said many things went right for her team throughout the match. She attributed the win in large part to the timely hitting from Whitson, the digs and defense from Kincaid and assists from Abby Trachsel and Emma Braby.

"Holy cow! How many awesome digs did that girl Isabella have? She had some amazing defensive plays. That really set our team on fire to see her go all out like that. The rest of our team just carried forward with that," Bailey said. "Abby and Emma have always done a great job for us on the back row and it gets overlooked all the time. They don't get that credit, but they really deserve it. We have a really good passing team and a really good defensive team."

Bailey said the great play of her team through the opening week of the season is no surprise to her. Bailey has had supreme confidence in her players because of the work they have put in throughout the year and they know how to play at a high level. 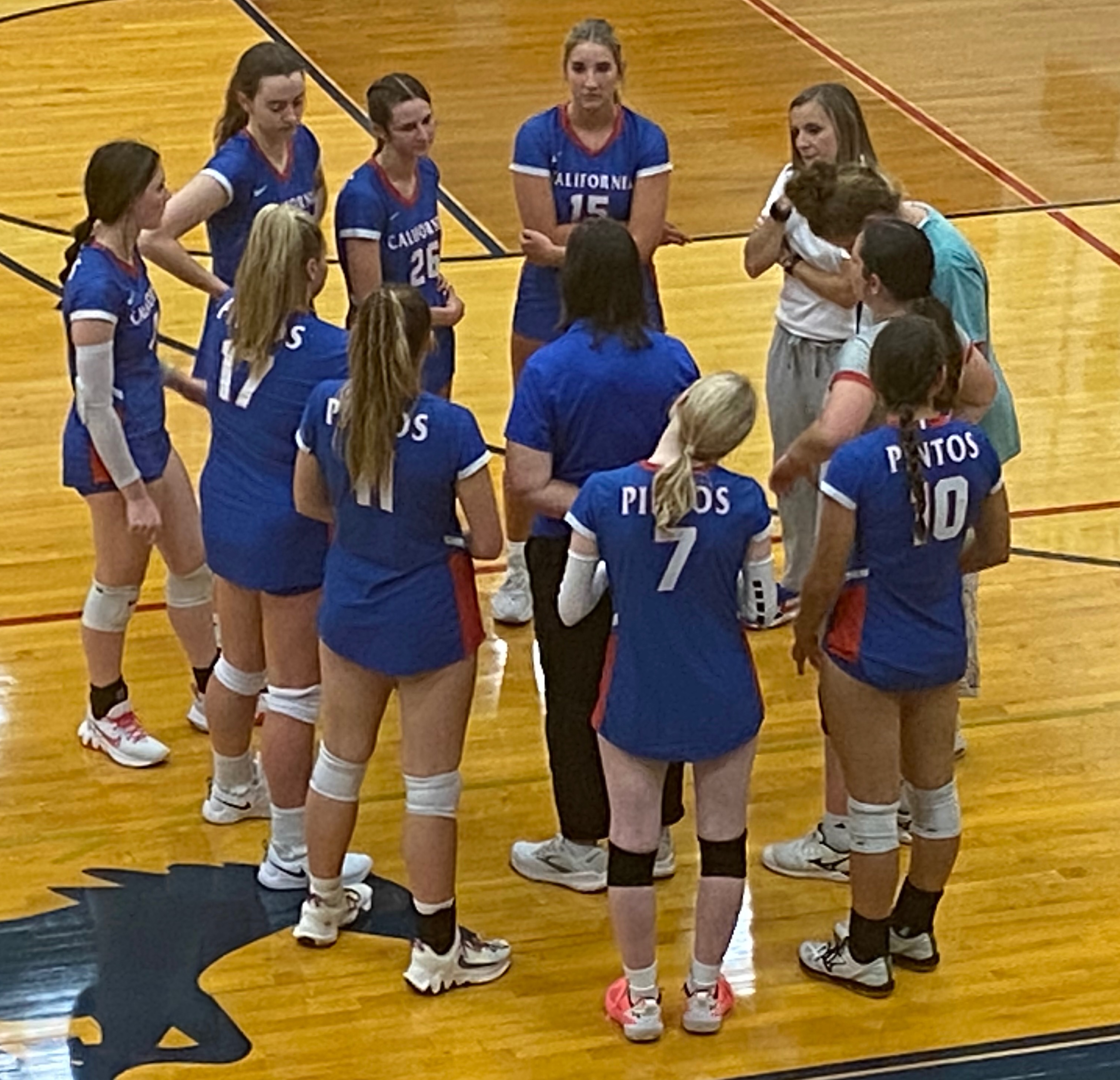 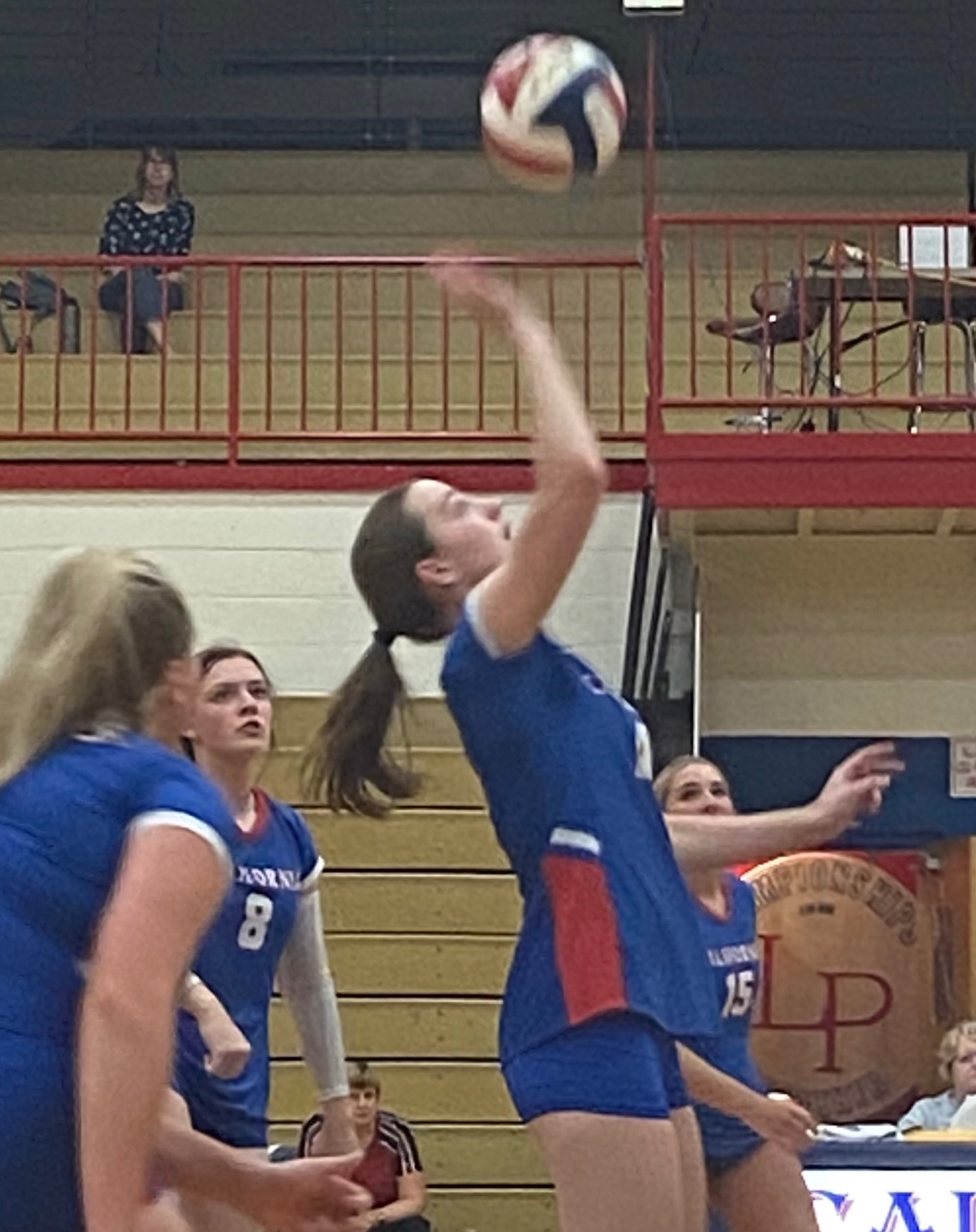 Senior Lauren Friedrich puts California up 6-1 in the second set against Mexico with a spike. (Democrat Photo/Evan Holmes) 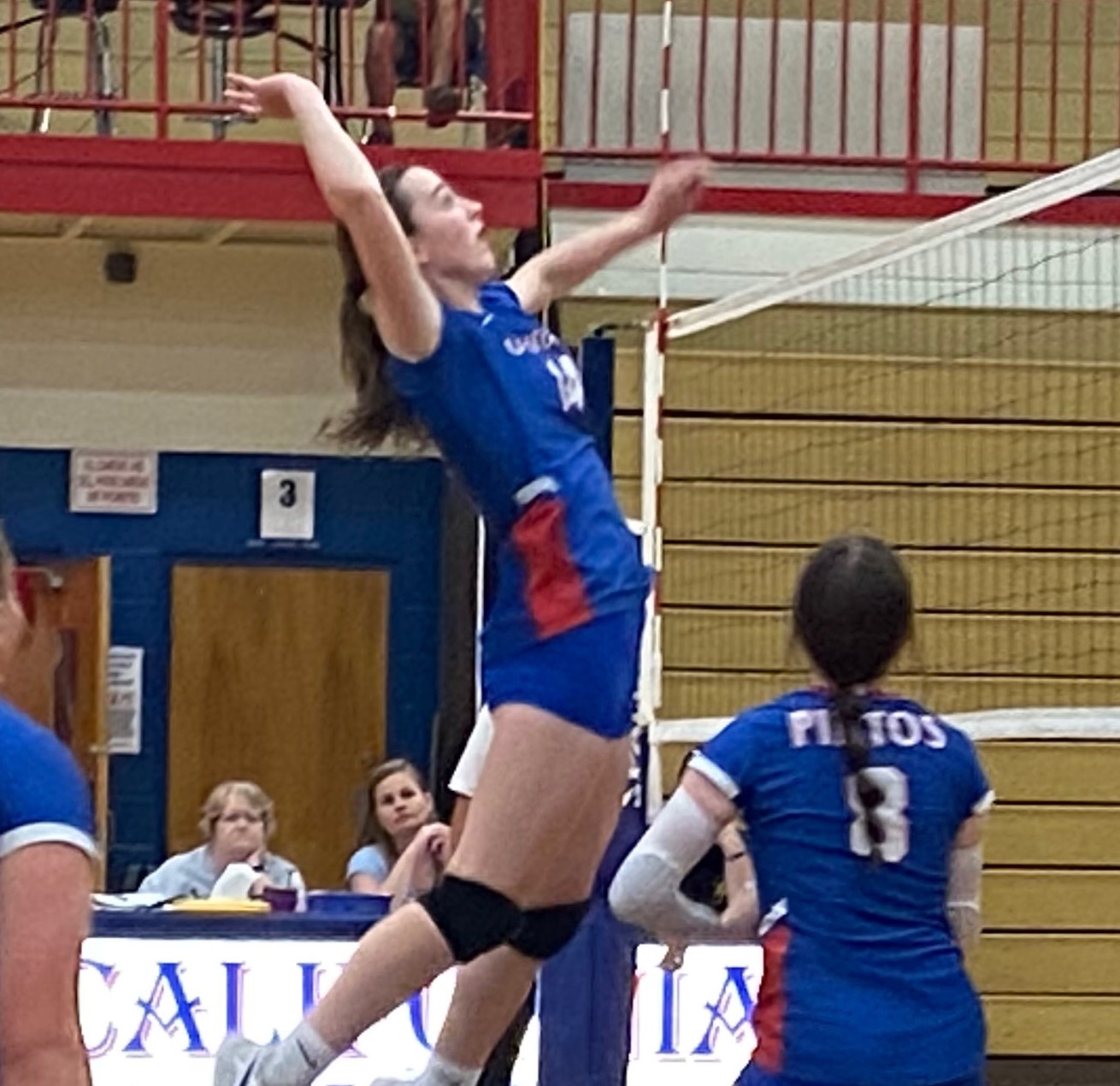 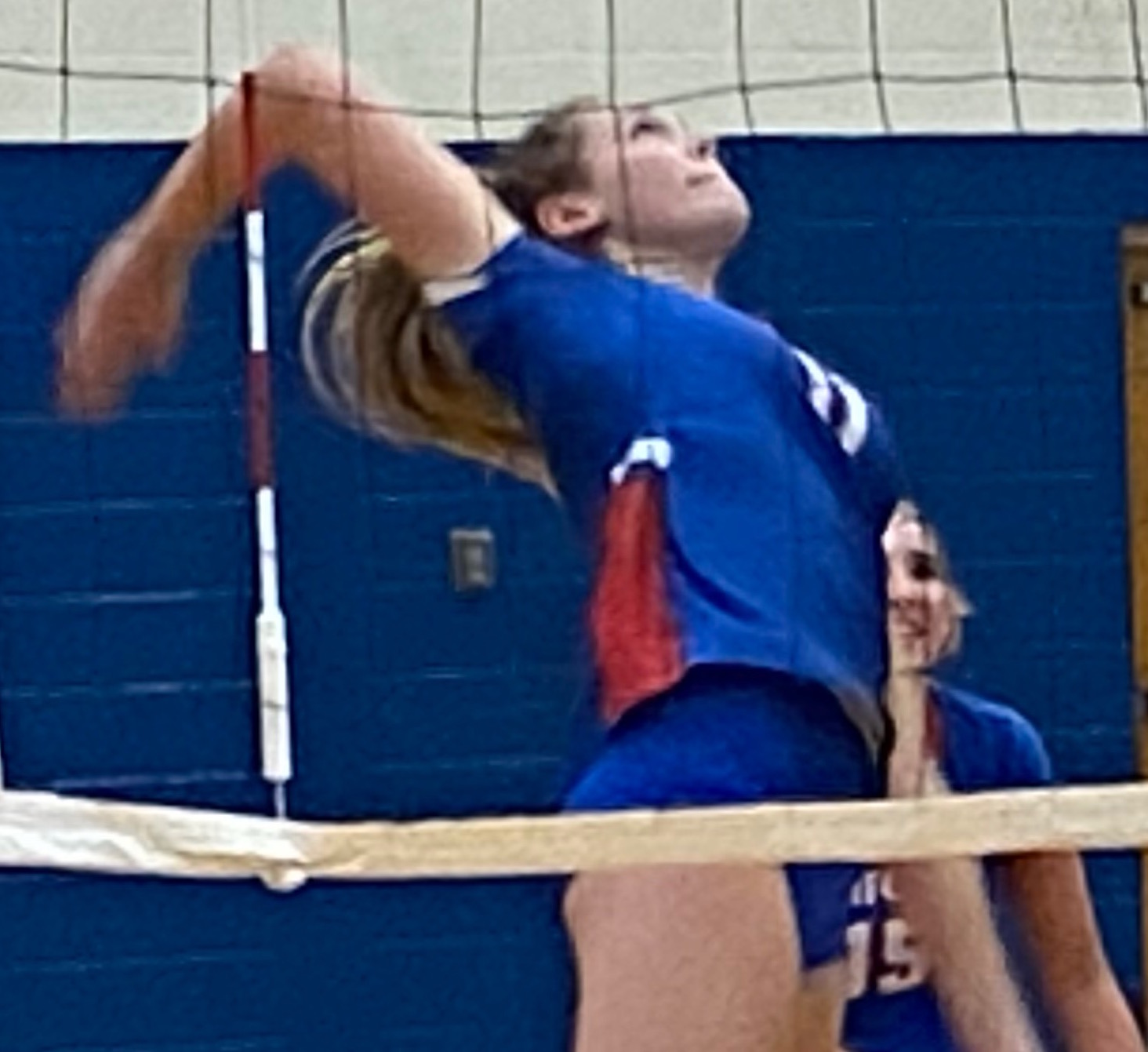 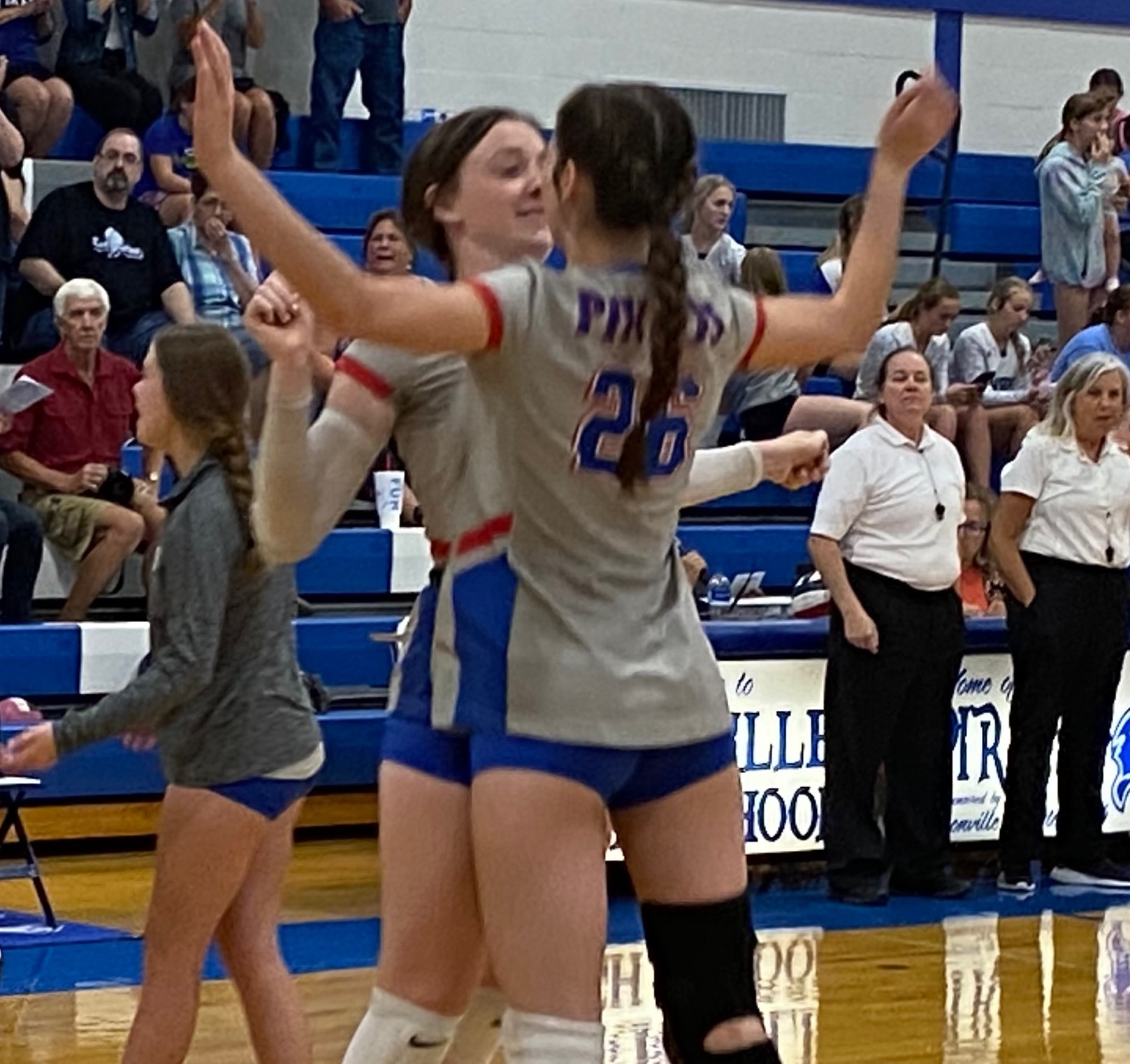 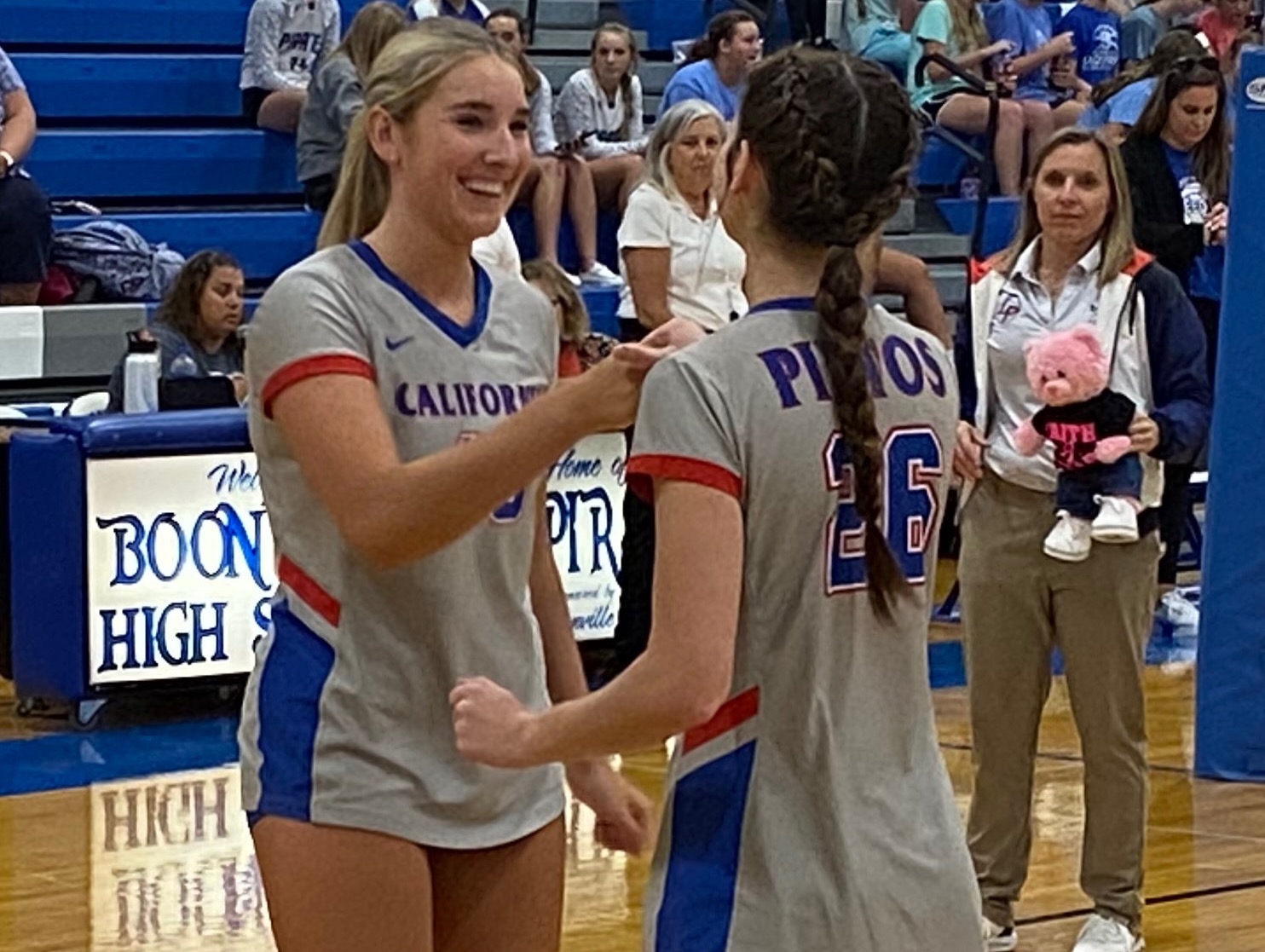 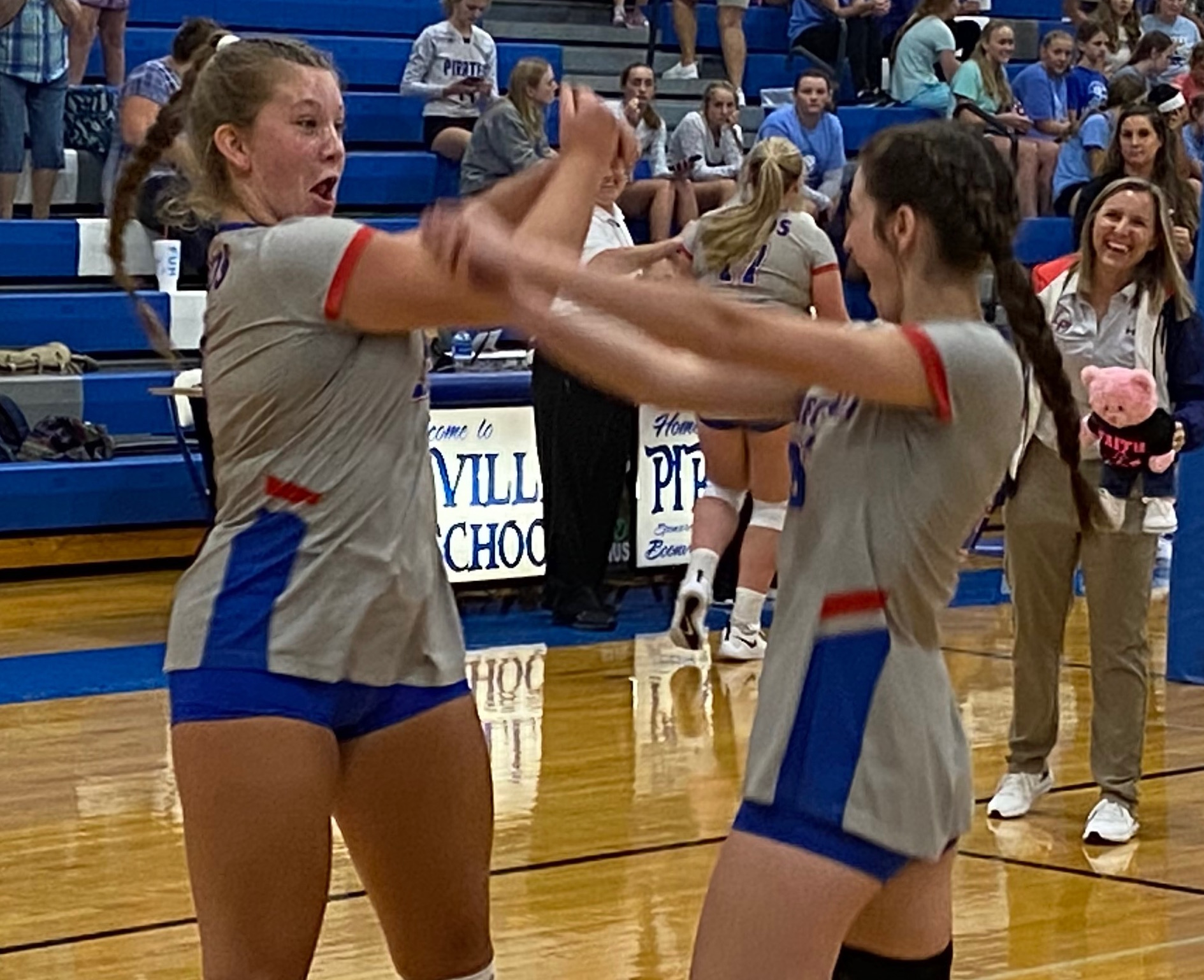 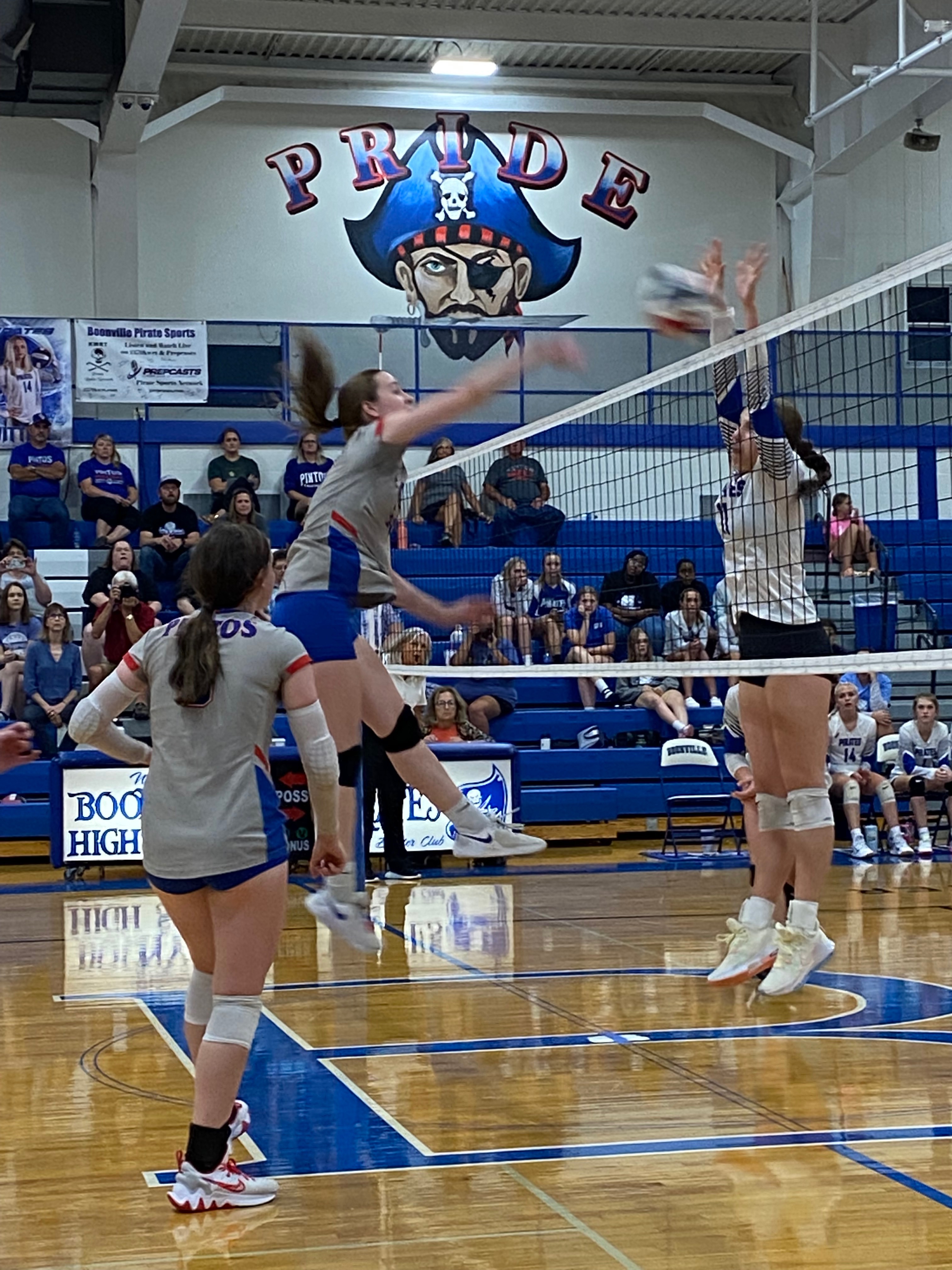 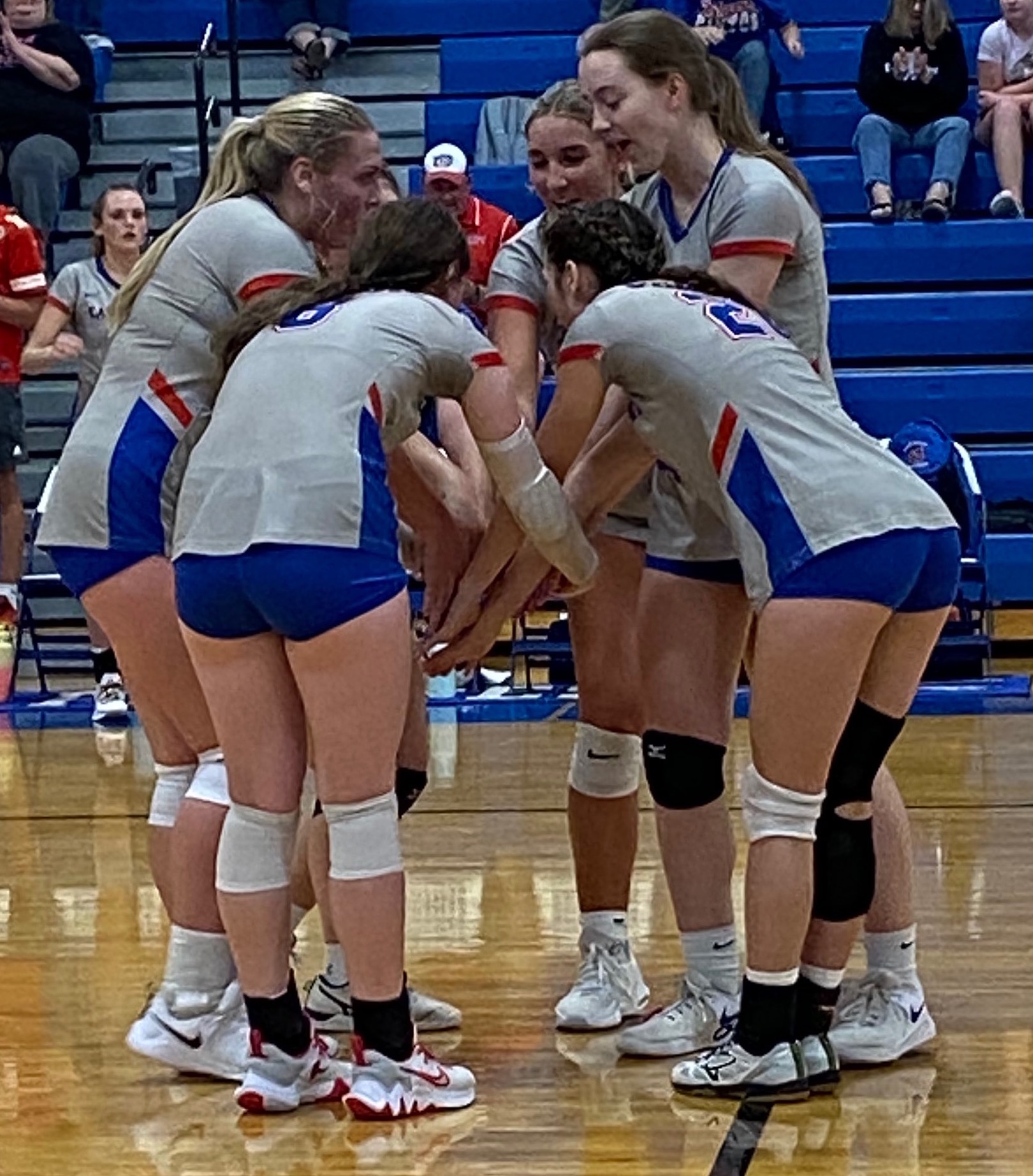 The Lady Pintos celebrate an ace in the third set against the Lady Pirates. (Democrat Photo/Evan Holmes) 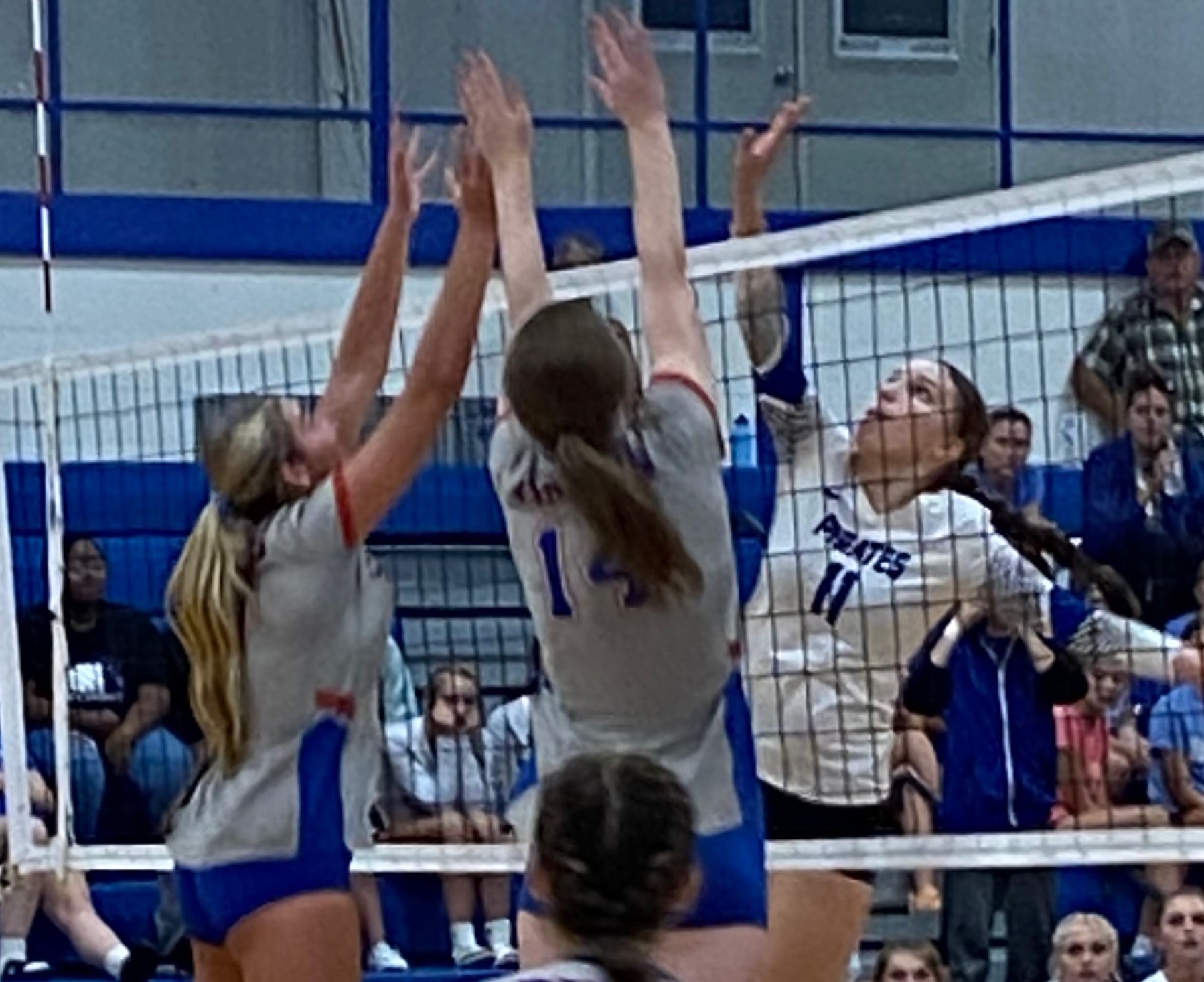 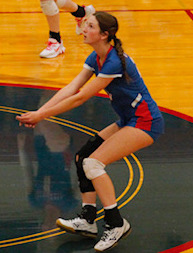 Junior Penelope Cotten gets a dig for the Lady Pintos against Mexico. (Photo submitted by Andrea Kincaid) 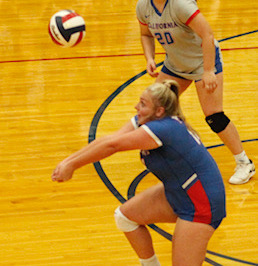 Senior Abby Trachsel gets a dig for the Lady Pintos against Mexico. (Photo submitted by Andrea Kincaid)

Junior Isabella Kincaid gets a dig for the Lady Pintos against Mexico. (Photo submitted by Andrea Kincaid) 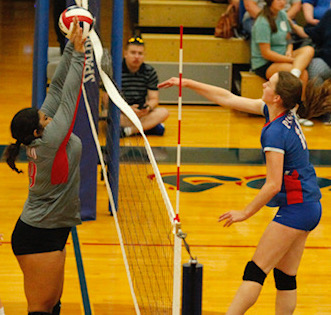 Senior Lauren Friedrich gets a spike for California over the outstretched hand of the Lady Bulldogs defender on Tuesday. (Photo submitted by Andrea Kincaid)