Pintos bounce back in win over Fulton Hornets 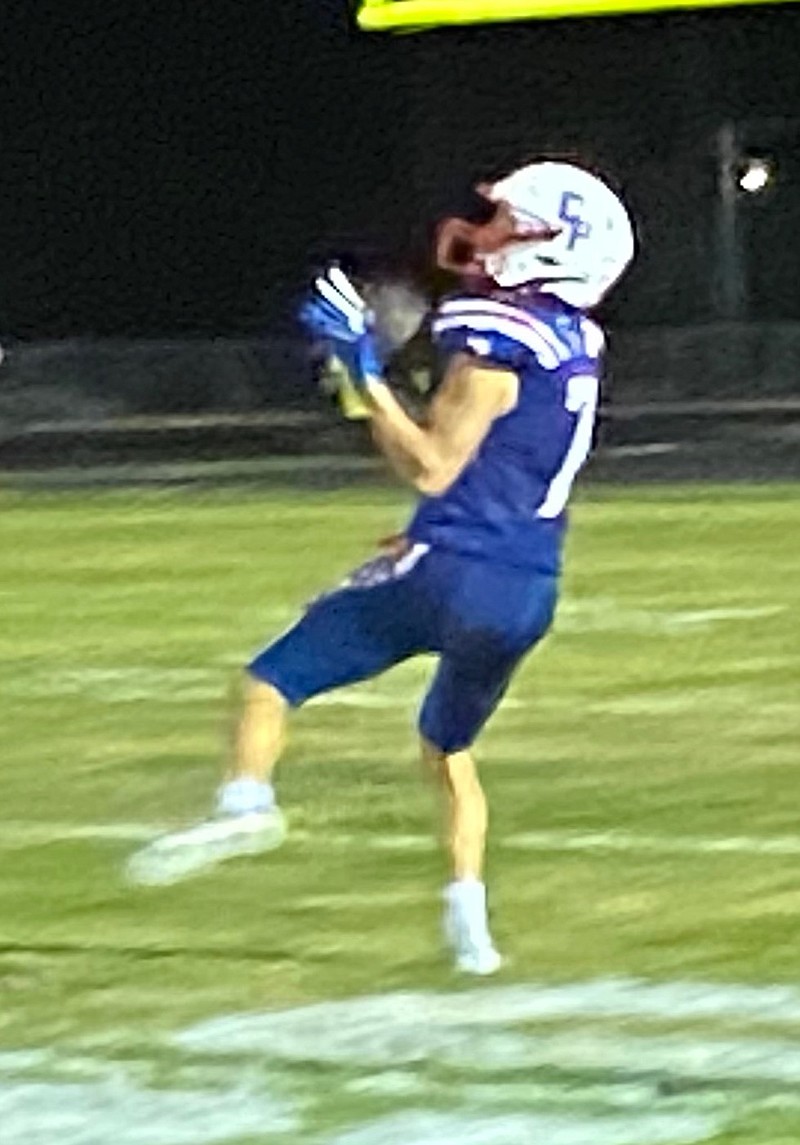 Junior wide receiver Cameron Combs makes a 42-yard catch for the Pintos in the fourth quarter against the Hornets. Combs made five catches for 58 yards. (Democrat Photo/Evan Holmes)

The 47-34 loss to the Savannah Savages on opening night was a bitter pill for the California Pintos to swallow.

But head coach Seth Womack got his players to put the loss behind them and move forward to their Week 2 matchup against the Fulton Hornets. California took command of the game right from the opening play and quickly put Fulton in the rear-view mirror with a 61-34 victory against the Hornets for their first win of the 2022 season.

Fulton won the coin toss and chose to defer until the second half, so California started the game on offense. Just :52 into the game, California quarterback Martin Klimer threw a 29-yard touchdown pass to his younger brother Hayden Kilmer.

The touchdown was not only an important one, it was also a redemption moment for Hayden Kilmer who had two fumbles against Savannah that led to points for the Savages. Womack said Kilmer did a good job of putting the game against Savannah behind him and it helped his performance against Fulton.

"Once that game is over and we reviewed it on Sunday with the players, it was a new week and Hayden showed just how resilient he is as a young man," said Womack.

On California's next possession, Martin Kilmer delivered six more points for the Pintos on a 47-yard rushing touchdown down the left sideline to put the Pintos up 12-0 in the first three minutes of the game.

But the Pintos were far from finished. Fulton took over at its own 15-yard line on their ensuing drive. On the first play, California junior defensive back Walker Friedmeyer poked the ball out of the running back's hands before he hit the ground. No whistle was blown and Friedmeyer took the ball 85 yards the other way for another Pintos touchdown. After a brief discussion by the officials, the call stood and the Pintos completed the ensuing 2-point conversion to take a 20-0 lead midway through the first quarter.

"Anytime you can score on a turnover, it's big for your team," Womack said. "However at that time, the game was probably already out of reach. Even so, it was a big play for both him and our team at the time."

The game seemed to be even more out of reach as California continued to frustrate the Hornets early and often by controlling every phase of the game in the first quarter. On the next two kickoffs, California went with short kicks to try and get Fulton to fumble the ball. Both times, the Hornets fumbled the kickoff and the Pintos recovered the ball. The two turnovers led to two more touchdowns in the first quarter for California. A six-yard rushing touchdown from sophomore running back Tyler Oden and a 46-yard receiving touchdown from Kilmer to Friedmeyer. After just twelve minutes of play, California ad blown the game open with a 34-0 lead.

California began the second quarter with another touchdown with a four-yard passing touchdown from backup quarterback Gavin Porter to Friedmeyer. Womack made a little bit of a risk by inserting Porter into the game. But he felt it was critical for his younger players to get time on the field when given the chance.

"Giving our younger guys time on the field is huge for their development. We need to see what those guys can do against varsity competition," Womack said.

After the Hornets got on the board late in the second quarter with a 17-yard rushing touchdown, the Pintos felt they needed to keep their foot on the gas despite still ahead by 35 points. Porter brought the Pintos into Hornets territory. But California faced a third-and-long from the Hornets 40-yard line. Porter took the snap and connected with junior wide receiver Ayden Bryant for a 40-yard touchdown and knocked the wind out of Fulton's sails.

Fulton did manage to score two more touchdowns before halftime. But California still sat comfortably in the locker room with a 47-22 lead.

And the second half would become a curtain call for the Pintos after Martin Kilmer re-entered the game and threw a 56-yard touchdown pass to Bryant and ran into the end zone himself for a 21-yard rushing touchdown on the Pintos' first two possessions of the second half.

Throughout the rest of the game, Womack and his coaching staff started to once again substitute their younger players into the game and give them varsity experience. Several of those players made an impact in the second half. Freshman Derek Jordan intercepted a pass from Fulton quarterback Walker Gohring. Sophomore Will Edwards completed three of six passes in the fourth quarter for 45 yards. With sophomore Jace Schreck catching one of those passes for 42 yards. And junior Cameron Combs caught five receptions for 58 yards.

When the final horn sounded, the final score was a 61-34 win for the Pintos.

Kilmer finished the game with three touchdowns and 9-of-12 passing for 185 yards and two rushing touchdowns on two carries for 68 yards. Womack has been impressed with Kilmer's play through the first two weeks of the season and his statistics speak for themselves.

"Martin met and exceeded every expectation placed on him," said Womack. "I'm very proud of his performance this week and last week as well. He's progressing very quickly and I have no doubt that he will continue to improve his game."

Hayden Kilmer had two receptions for 35 yards and a touchdown, while Oden had four carries for 12 yards and a 6-yard touchdown. Combs had five catches for 58 yards, while junior running back Austin Suen had six carries for 27 yards. Porter completed 4-of-6 passes for 62 yards and two touchdowns.

But perhaps the biggest difference for California in this game was the turnover ratio. After committing five turnovers previously against Savannah, the Pintos committed zero turnovers against Fulton and forced the Hornets into three turnovers. Which led to 21 California points.

"Turnovers are huge as we've previously mentioned to our kids. Usually the team the commits fewer comes out ahead," said Womack. "This week, we did a better job of holding on to the ball and it helped us get the win."

The Pintos will go back on the road Friday to open the Tri-County Conference portion of their schedule against Southern Boone in Ashland. 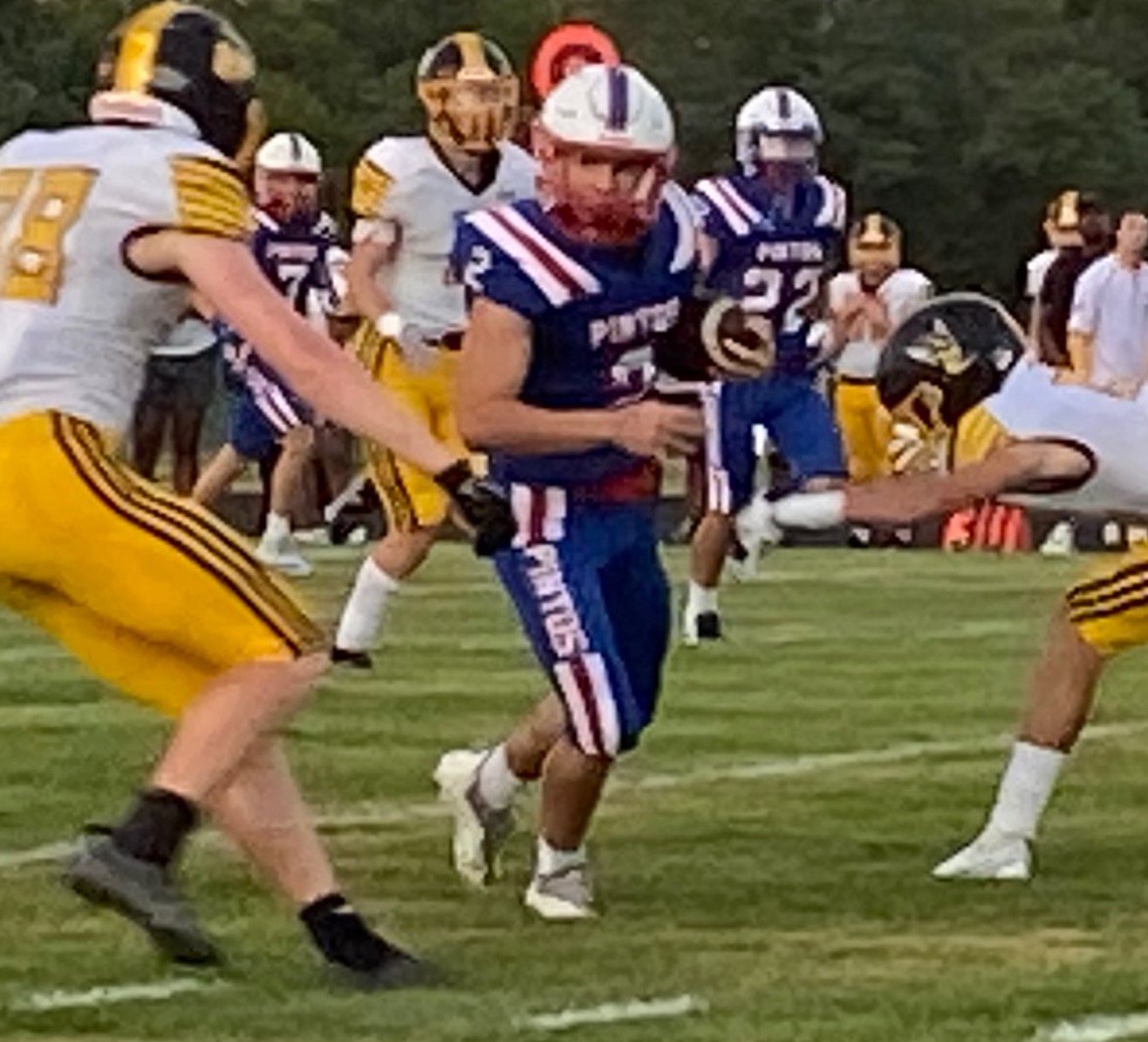 Sophomore running back Brooks Volkart gets past the Hornets defense and picks up a first down in Fulton territory. Volkart ran for 51 yards against Fulton. (Democrat Photo/Evan Holmes) 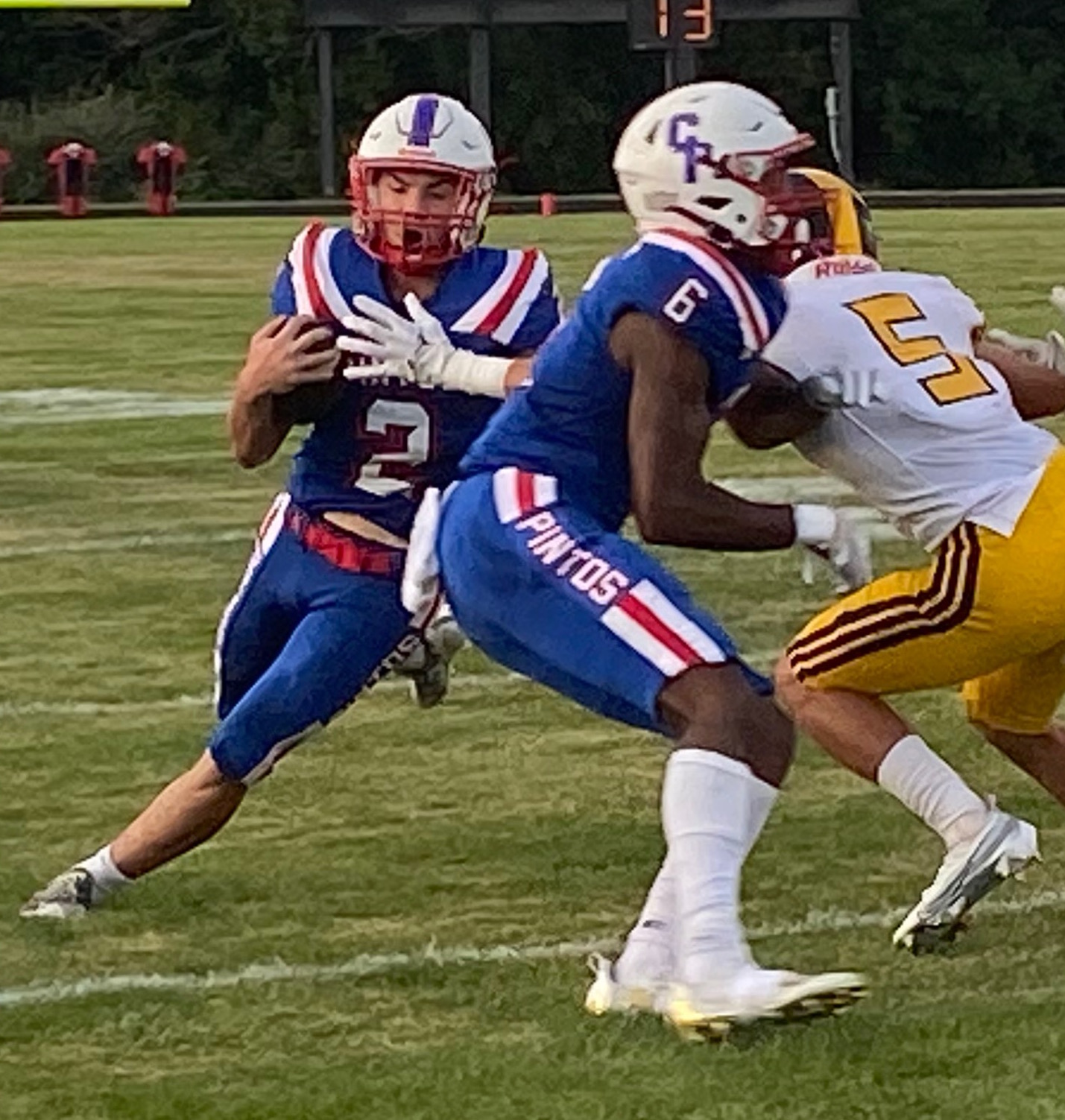 Sophomore running back Brooks Volkart (left) converts a third down play for the Pintos with the help of a block from teammate Ayden Bryant (right). The Pintos went 6-9 on third down against Fulton on Friday night.(Democrat Photo/Evan Holmes) 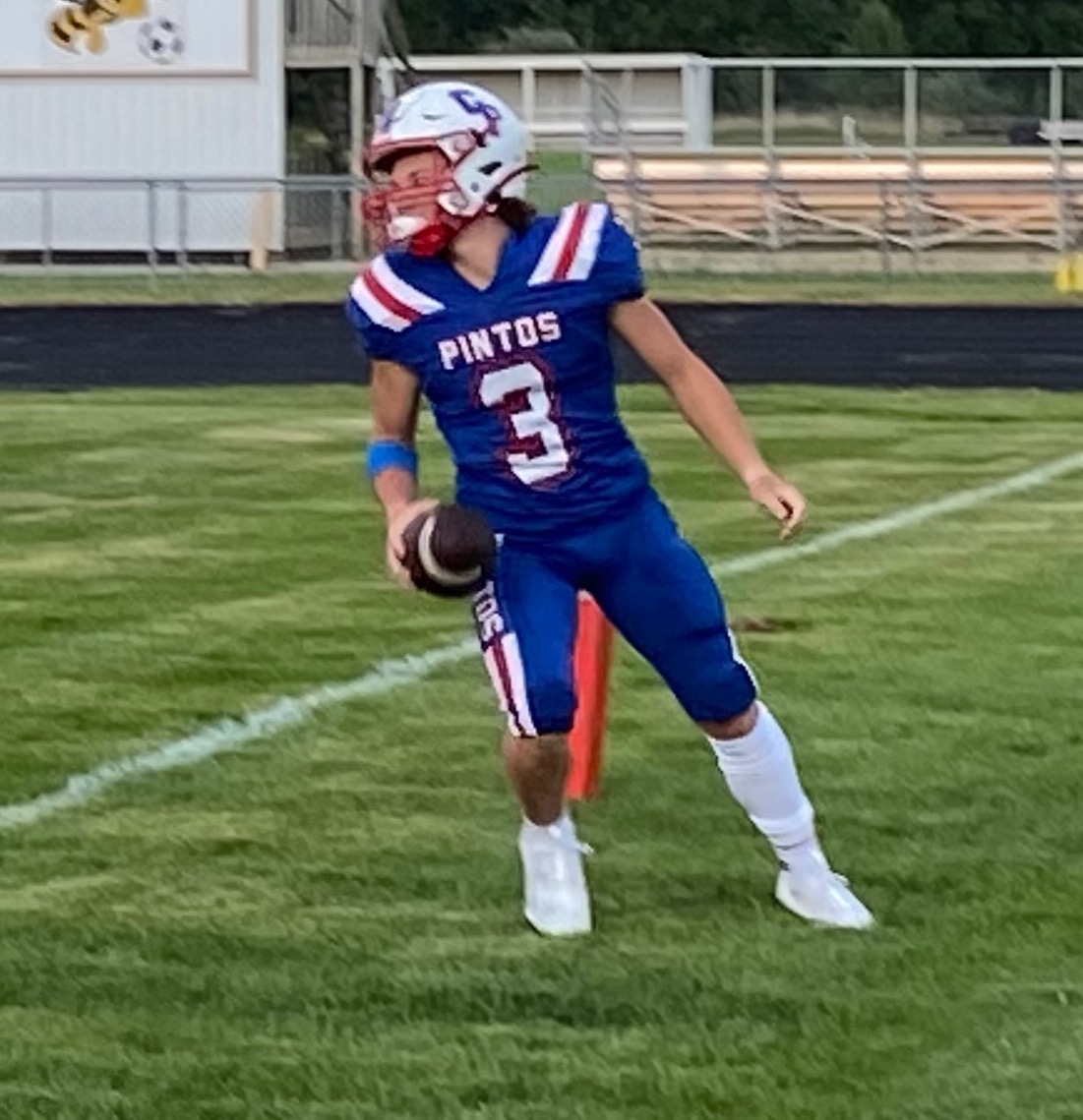 Sophomore running back Tyler Oden takes the ball into the end zone for a six-yard touchdown to give California a 27-0 lead. (Democrat Photo/Evan Holmes) 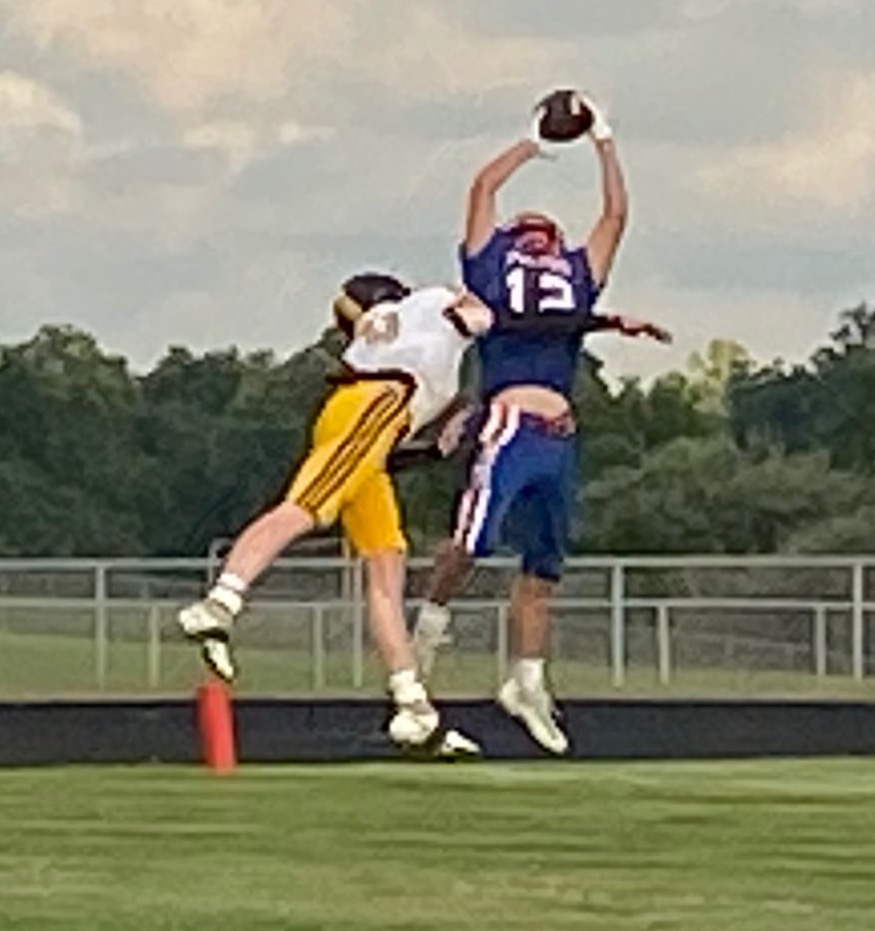 Sophomore Hayden Kilmer makes a leaping catch from his older brother Mto put the Pintos up 6-0 in the opening minute. (Democrat Photo/Evan Holmes) 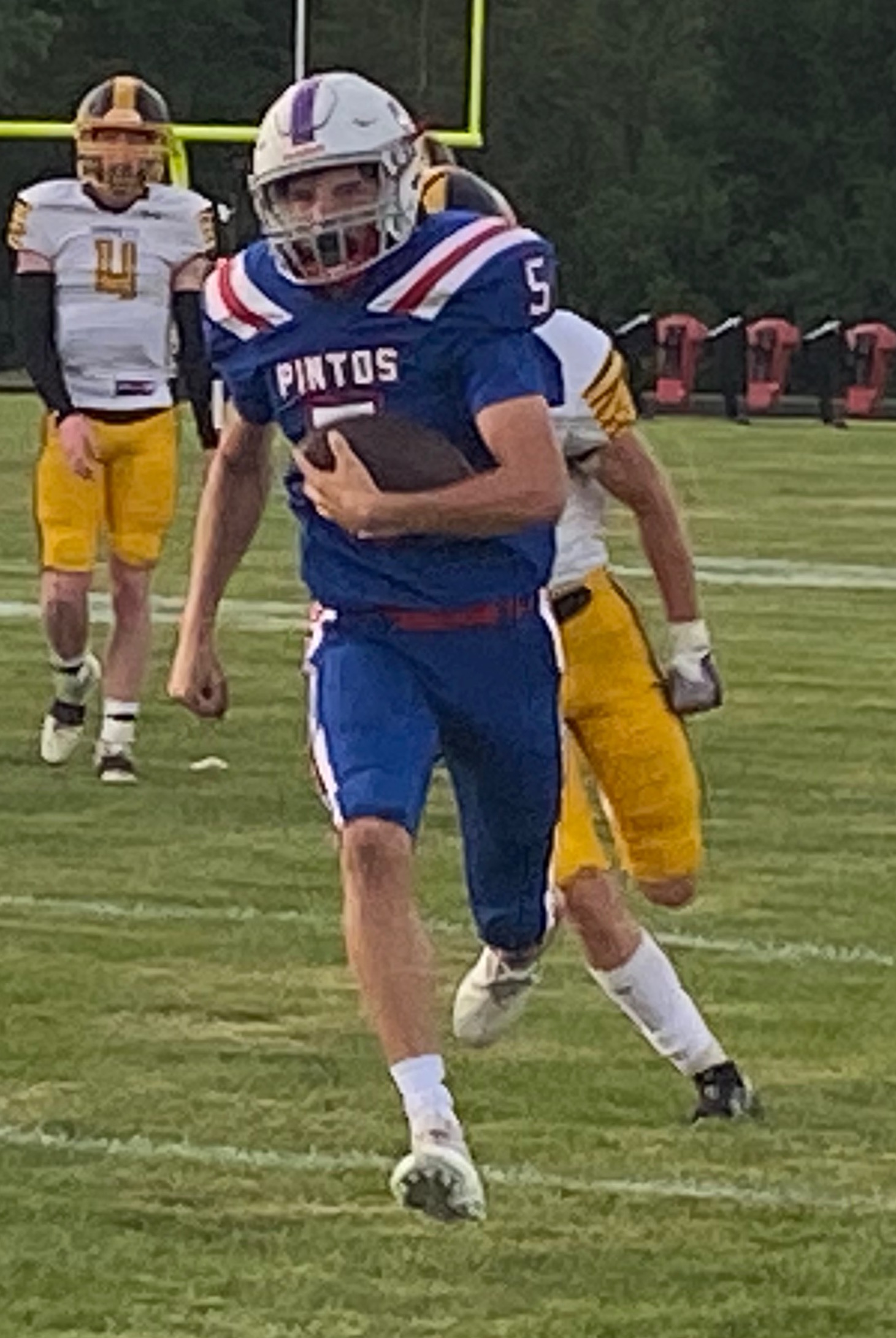 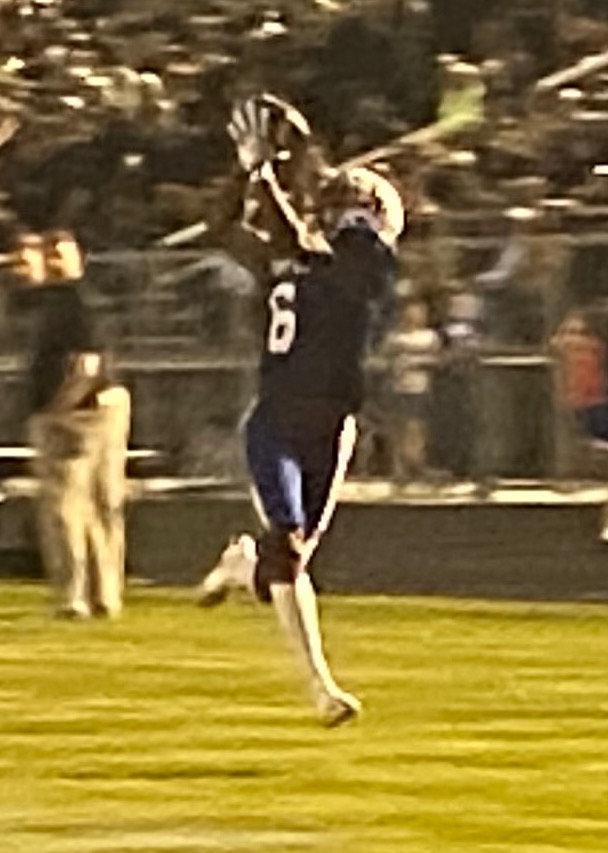 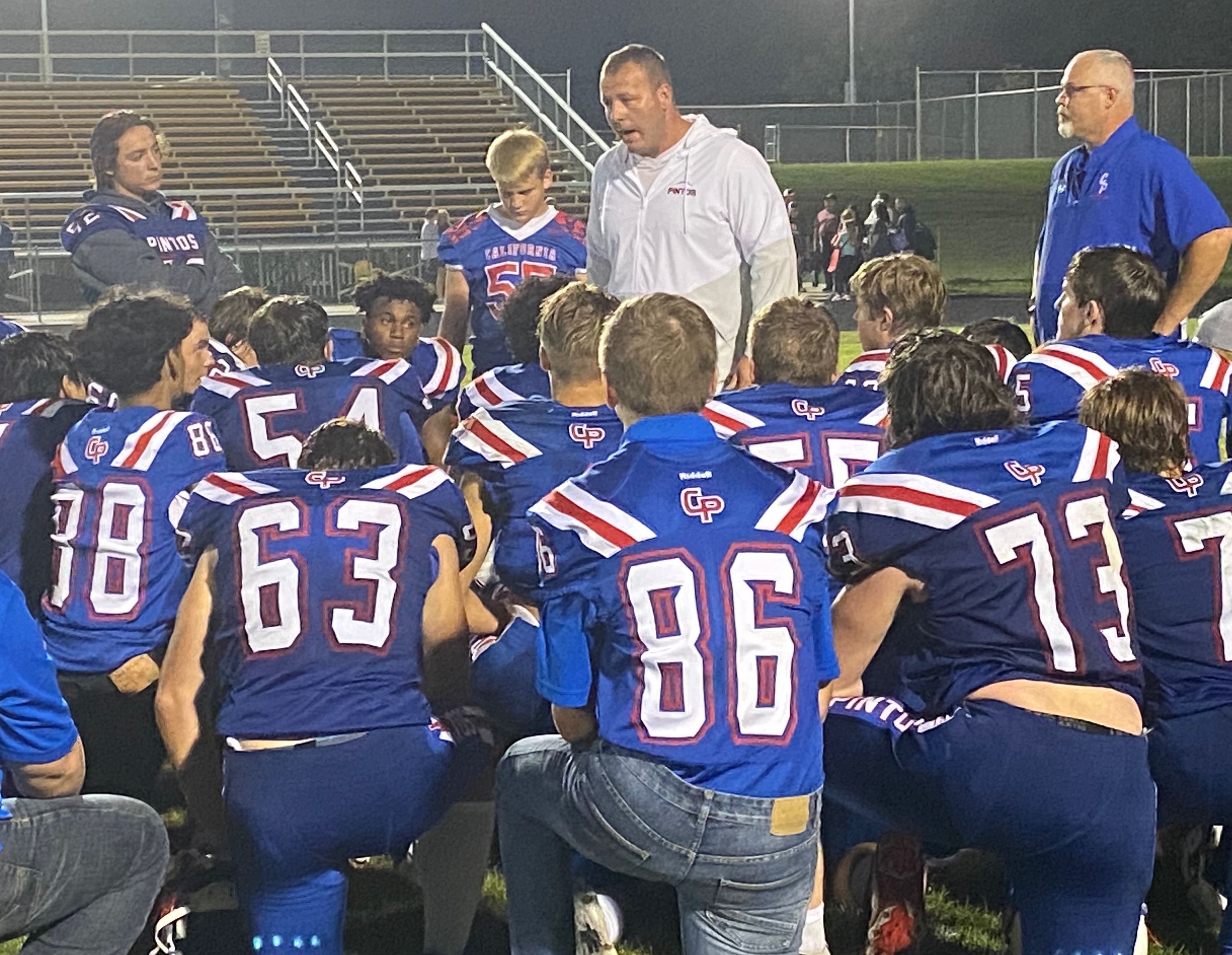 Print Headline: Pintos bounce back in win over Fulton Hornets