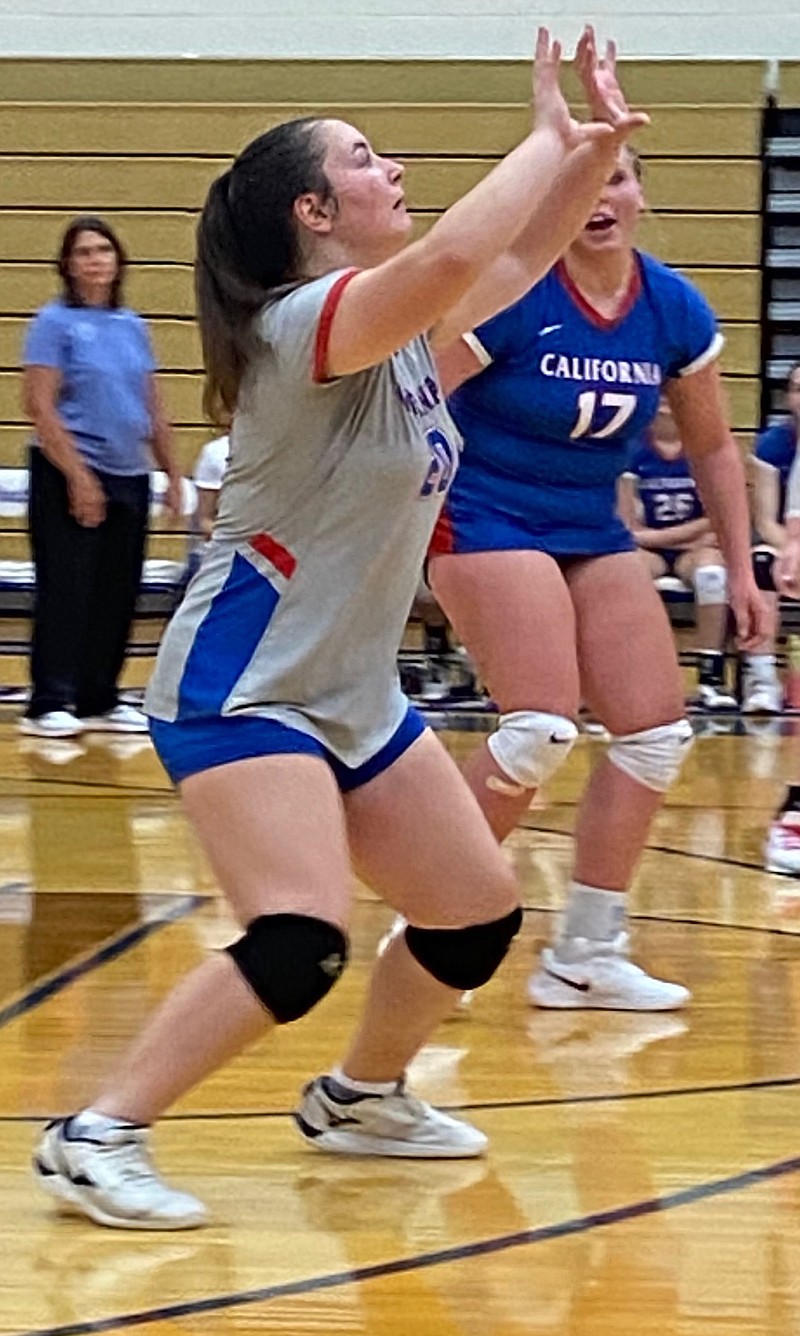 Senior Emma Braby set up her teammate with an assist. (Democrat photo/Evan Holmes)

The California Lady Pintos came into last Thursday night's match against the Eldon Lady Mustangs brimming with confidence. Coming off a resounding 25-12, 25-14, 25-12 win against Sedalia Smith-Cotton behind a season-high 18 kills from Lauren Friedrich, California remained unbeaten and looking to continue the string.

Eldon proved to be a tougher opponent than California had originally thought, and the Lady Mustangs pushed the Lady Pintos to the brink of a loss early on. But California rallied together to come back and win the first set and then dominate the rest of the match to beat Eldon 28-26, 25-14, 25-11 and go to 5-0 on the season.

After winning the first two points of the opening set, the Lady Pintos were looking to play their brand of volleyball early on. But what they hadn't planned for was Eldon's defense being as disruptive as it was. Eldon's defense not only returned the ball, but also spread its defense and refused to let any ball hit the ground.

"They were a scrappy team and we hadn't really played a team that just kept returning the ball. I think that threw us for a bit. But once we figured out that it's coming back, we adjusted to their great defense and we were able to attack them," California coach Julie Bailey said. "Because of their great defense, we weren't getting the passes and the sets we needed to hit the ball. But once we adjusted to the fact that the ball would be coming back to us, we started making good passes and we were able to attack. Which made it a lot harder for them to play defense against our attack."

The Lady Mustangs grabbed the next four points and maintained the lead all the way through a majority of the set. Unable to get a grip on Eldon's defense, California found itself in a deadlock with the feisty Lady Mustangs, who continued to control the first set and force California to defend against the return.

Bailey has always known the Lady Mustangs were capable of this kind of attack with all the start athletes that they have.

"They seemed to be everywhere," she said. "They didn't let any ball die and they have great defensive passers. They're really quick and they have some really great athletes that I've watched since my daughter was little. We played against them in basketball and volleyball. It's always been a challenge no matter what we play them in whether it's volleyball or basketball. Jaci Mueller is an outstanding volleyball player. Sydney Halderman is really quick to the ball. Haley Henderson is a great athlete who plays back row. They're competitors too, all of them."

Although the tempo of the first set belonged to Eldon, California held its ground and fought back to send the set to extra points. With the score tied at 26, Friedrich and Isabella Kincaid got back-to-back kills to steal the first set away from Eldon 28-26.

Now playing with reckless abandonment and adjusting to Eldon's defense, California never let the Lady Mustangs back into the contest. Underscoring their new resolve, they emphatically ended the match 3-0 by winning the second set 25-14 and the third set 25-11.

"Our hitters started just pounding the ball on them," Bailey said. "We weren't doing that as much in the first set. We had to change a lot because of their great defense and once we adapted to that, we were able to attack them and it was harder for them to set up their offense. With our defense, I thought we played the second two sets outstandingly. I mean, we weren't letting anything hit the floor either. We were going all out as well."

One of the biggest keys to California's dominance in the second and third sets was the spectacular play of its front-line hitters; in particular, Friedrich and Macie Trimble. The California pair combined for 20 kills and four blocks against Eldon.

"They just didn't have an answer for Lauren and Macie really. The team's that we've come up against, don't have the middles that we're blessed to have. Most schools have one good middle. We're lucky to have two or three," Bailey said. "On Tuesday night, we were in Smith-Cotton and the scorekeepers asked me if there was anything my girls couldn't do. 'I think you can put anyone, anywhere on the court and be successful.' And I said, 'Yeah, we're lucky to have eight girls who can play every position on the court."

Two days later, California played Eldon again twice in the Melissa Hoerber Invitational Tournament in Fulton. The two tied their first match at one set each and then California won the second matchup 2-0. California went on to defeat Bowling Green, Kirksville, and Savannah twice to win the tournament. 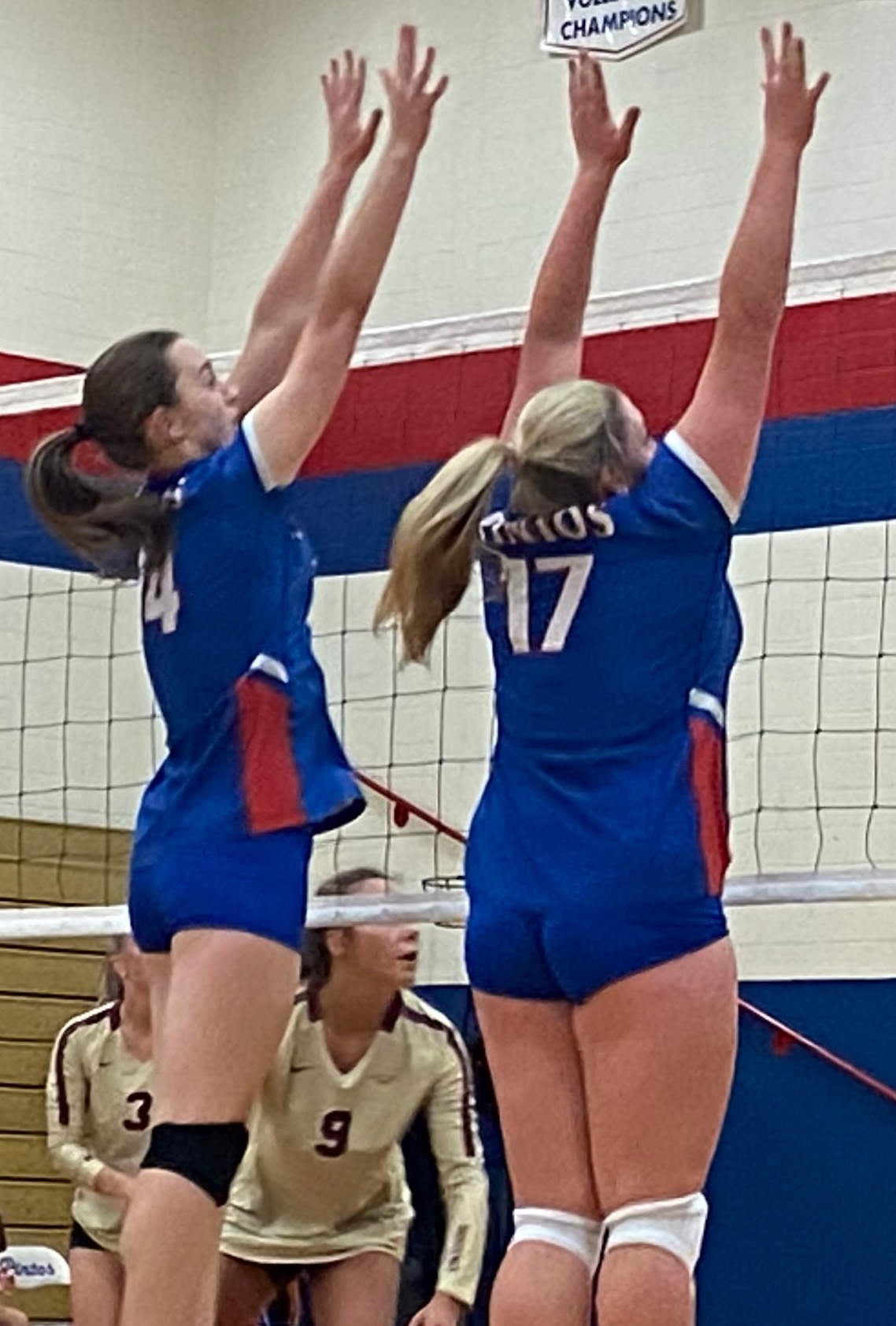 Seniors Lauren Friedrich (left) and Abby Trachsel (right) go up for a tandum block against the Lady Mustangs.(Democrat photo/Evan Holmes) 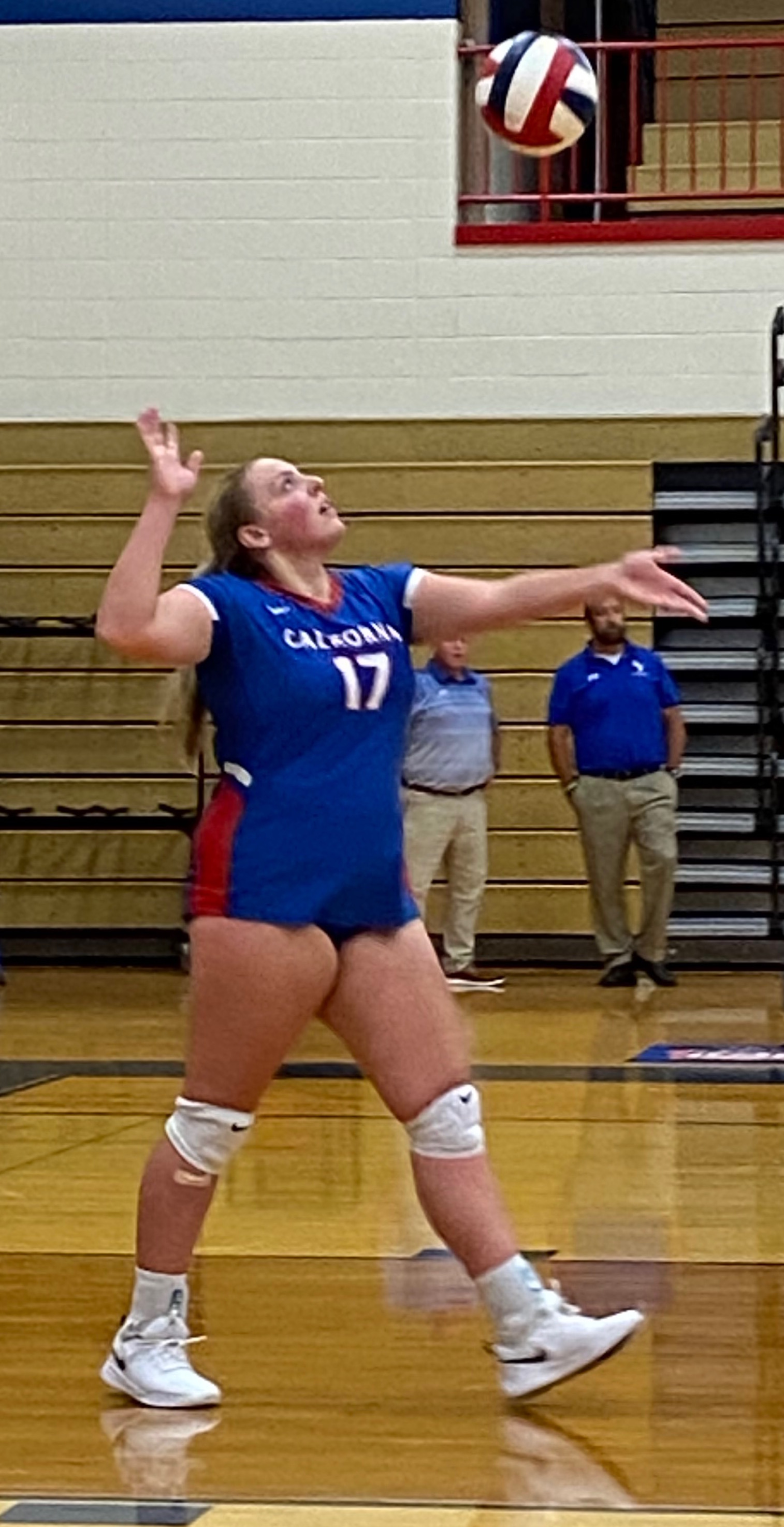 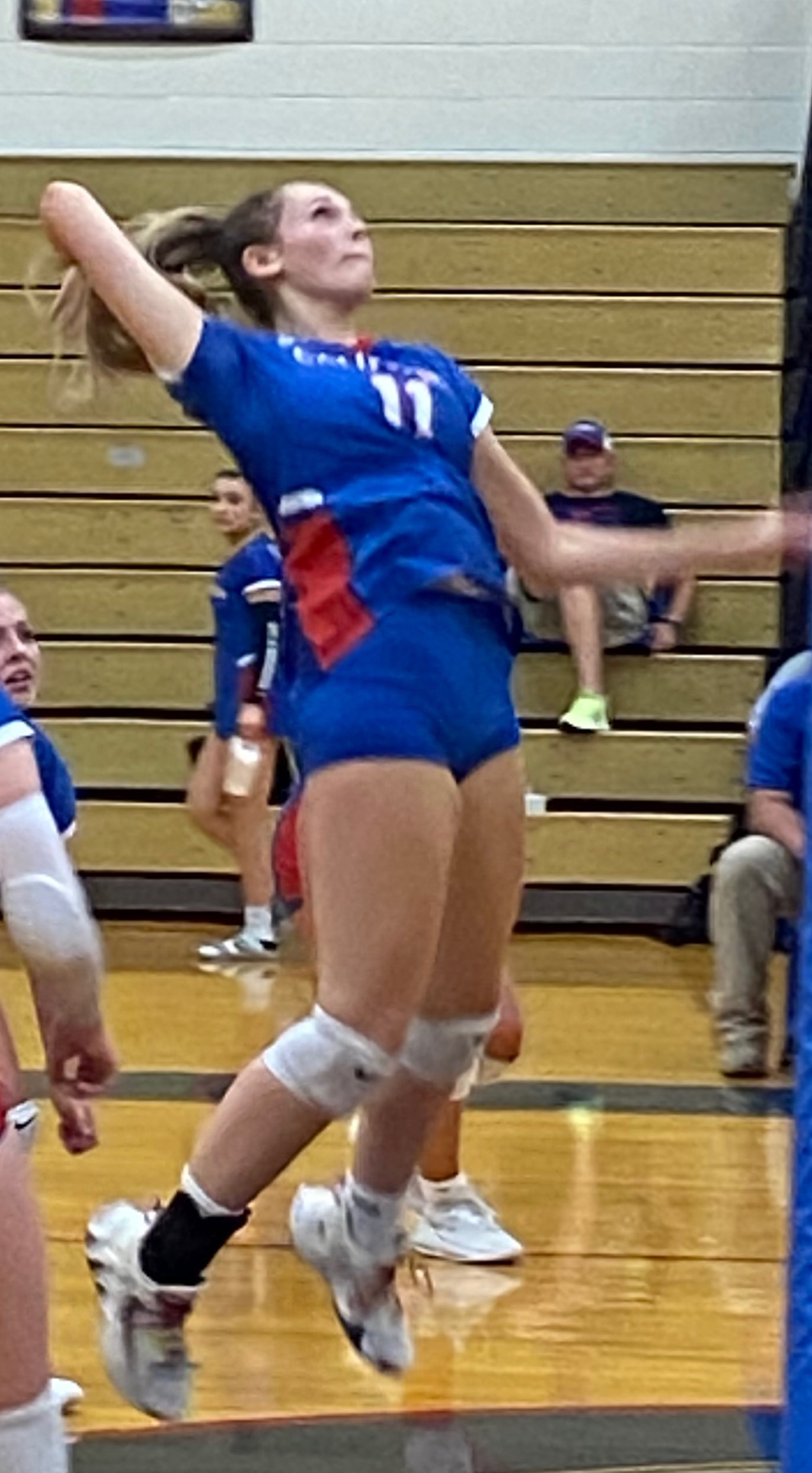 Junior Macie Trimble goes up for a kill in the third set against the Eldon Lady Mustangs. (Democrat photo/Evan Holmes)

Junior Isabella Kincaid jump up for her signature power kill from the left side against Eldon. (Democrat photo/Evan Holmes) 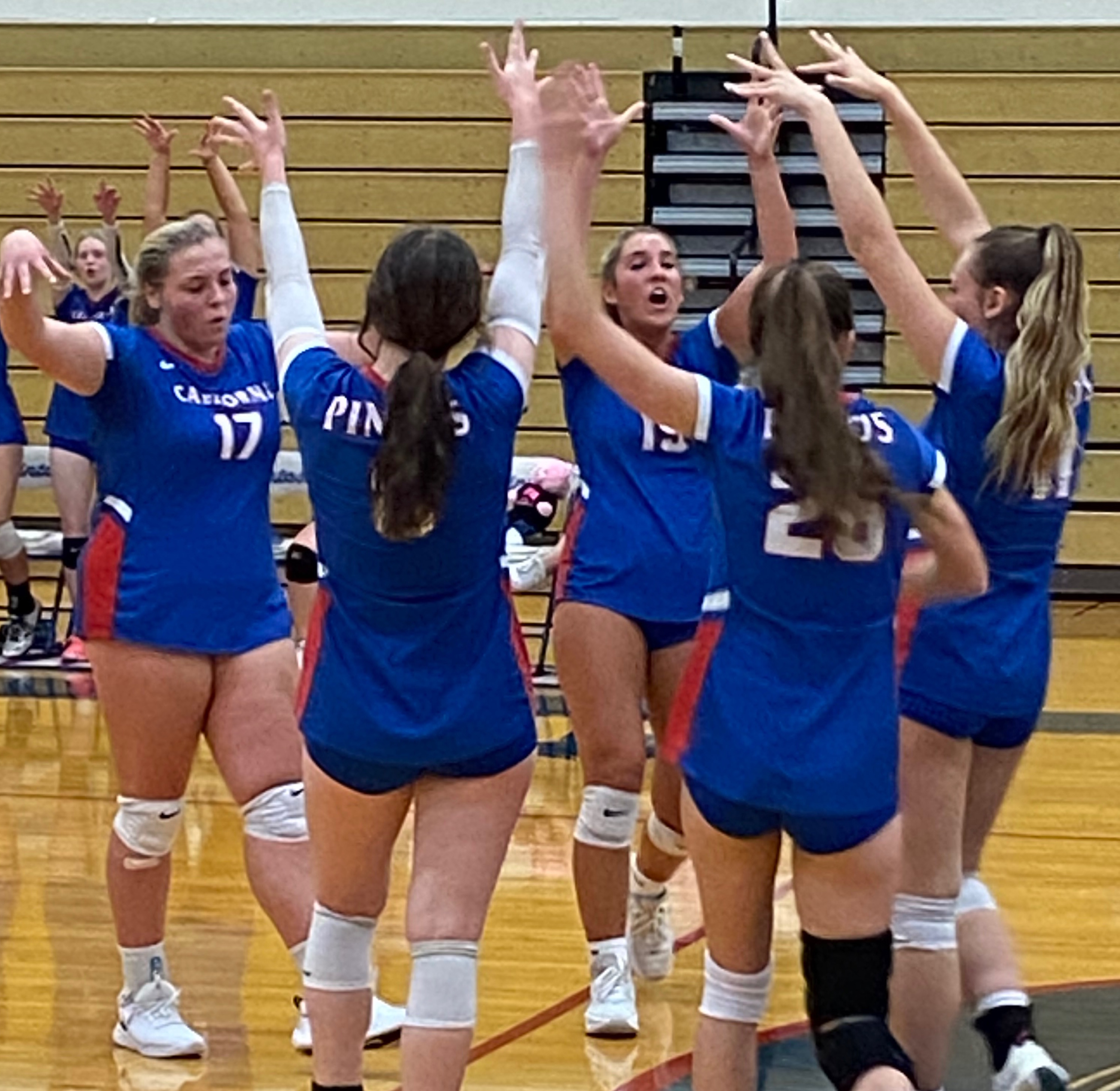 The Lady Pintos get a block point in the third and final set against the Lady Mustangs. (Democrat photo/Evan Holmes) 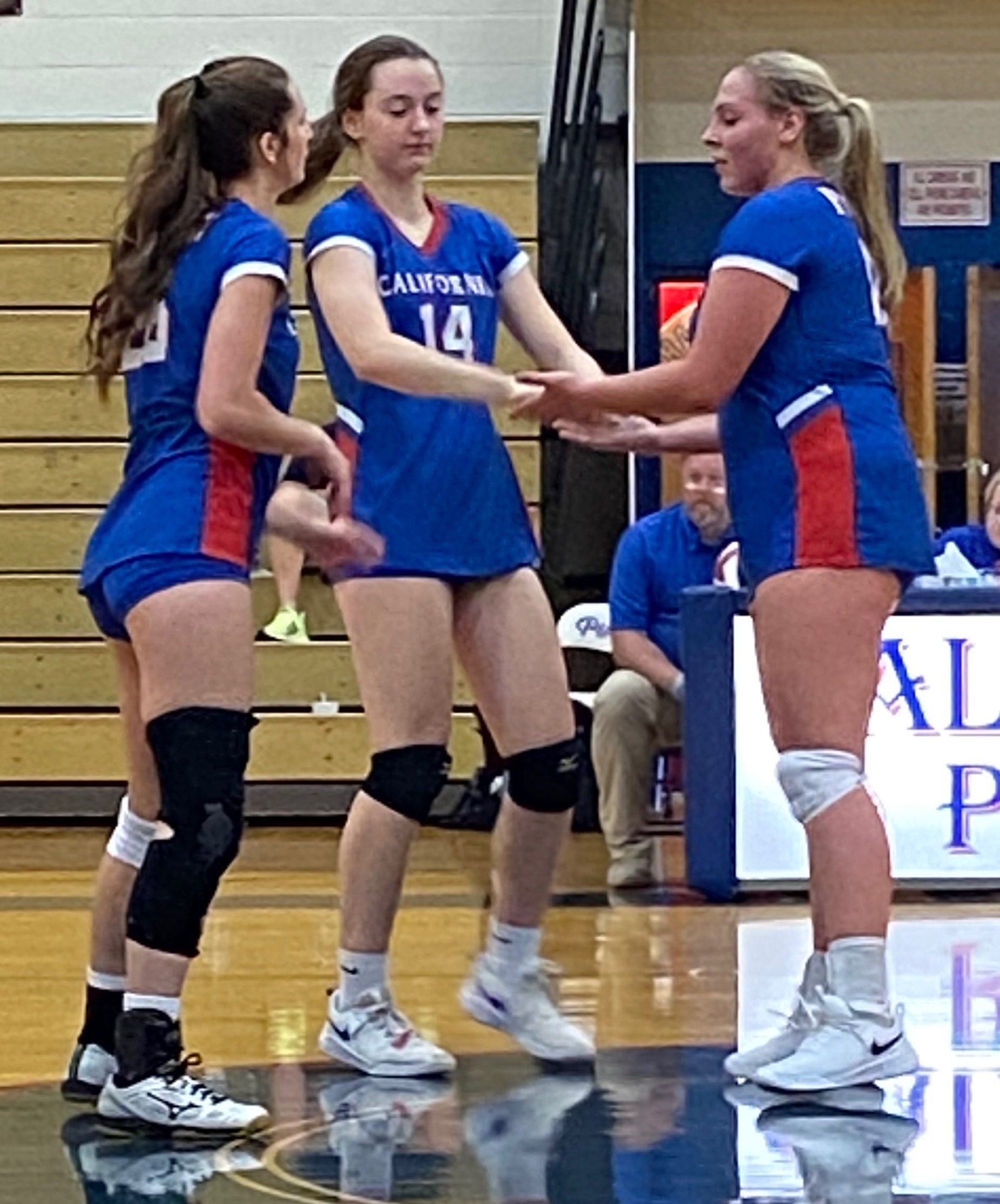 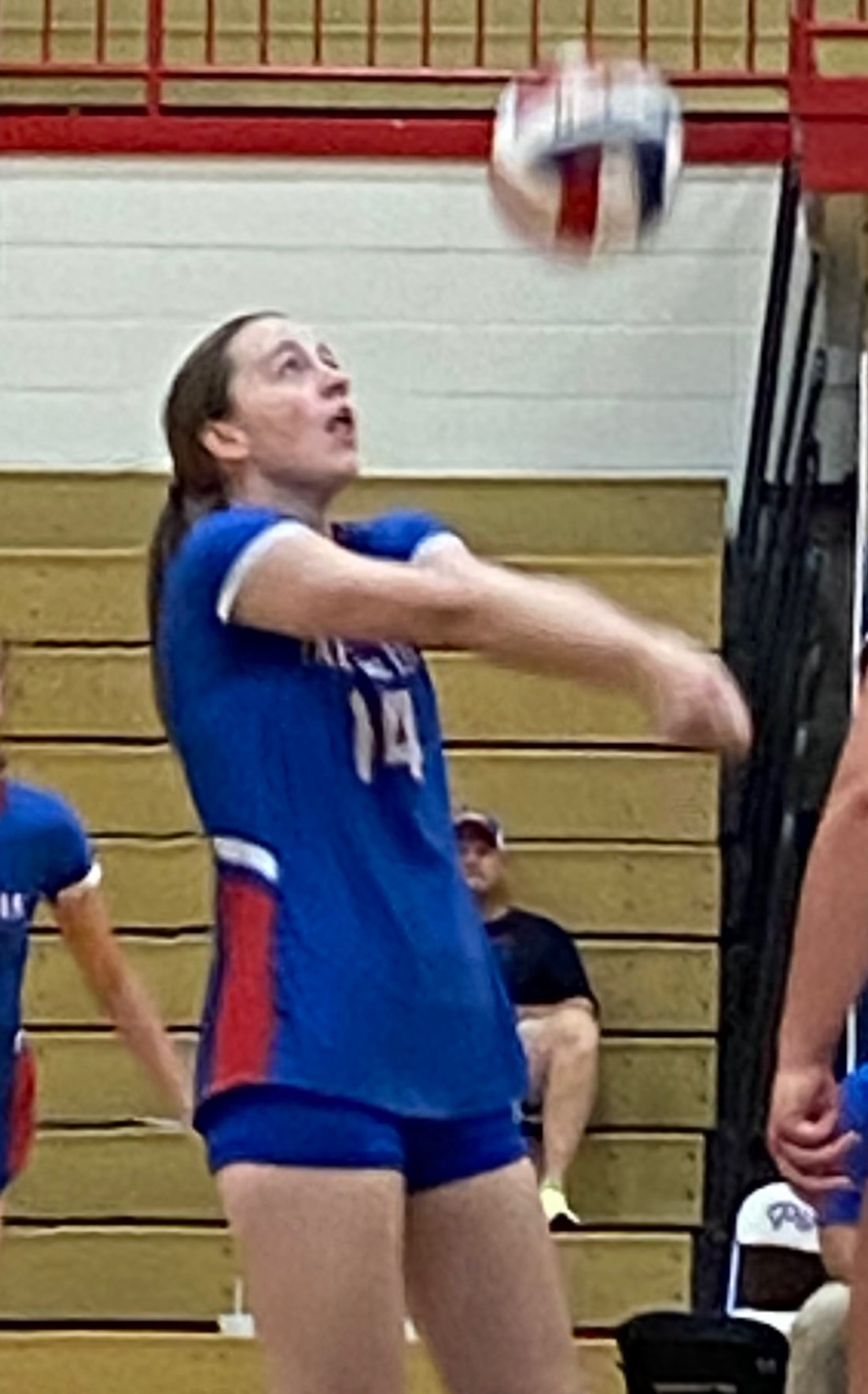 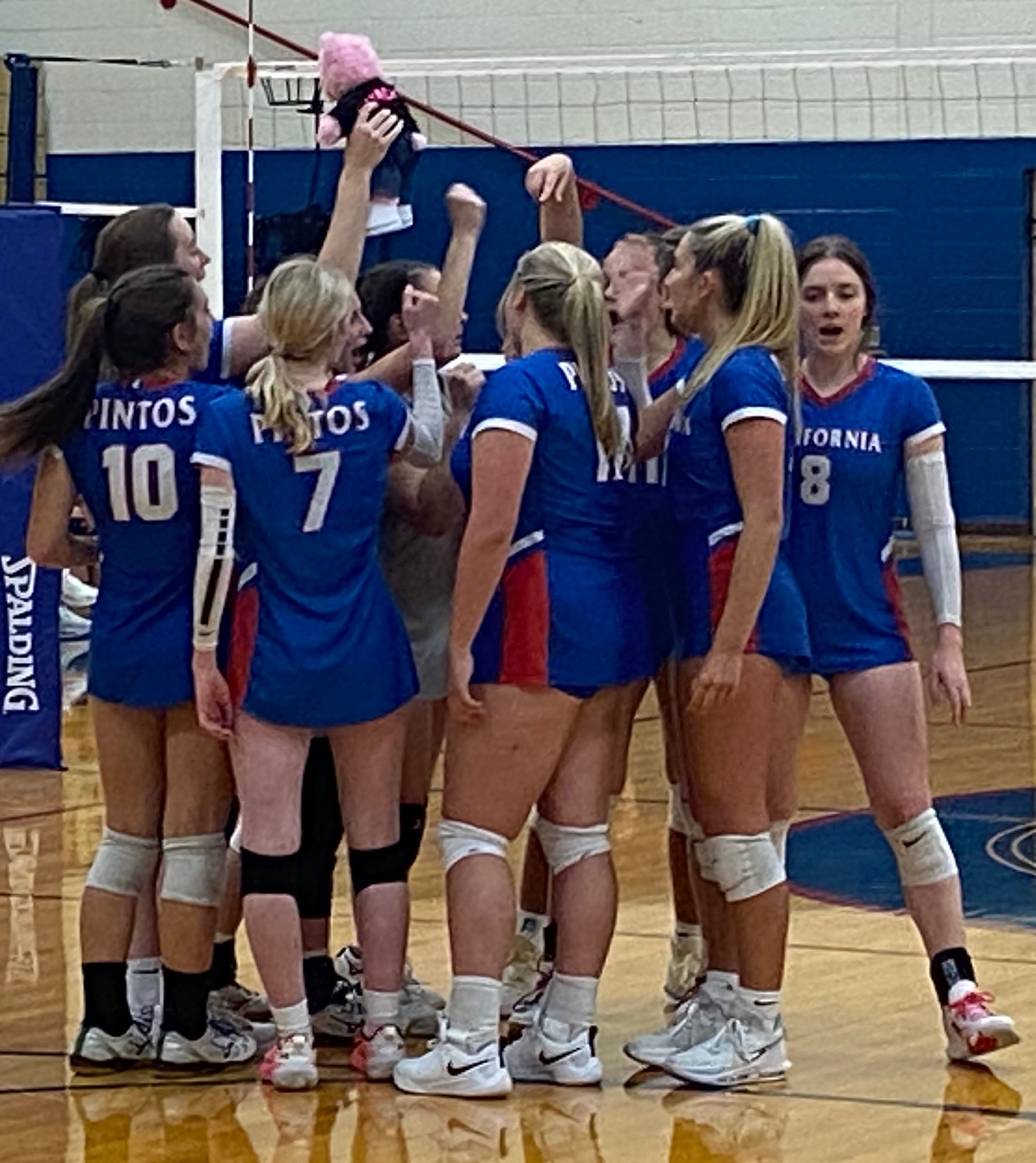 The Lady Pintos break their team huddle and get set to take on the Eldon Lady Mustangs. (Democrat photo/Evan Holmes) 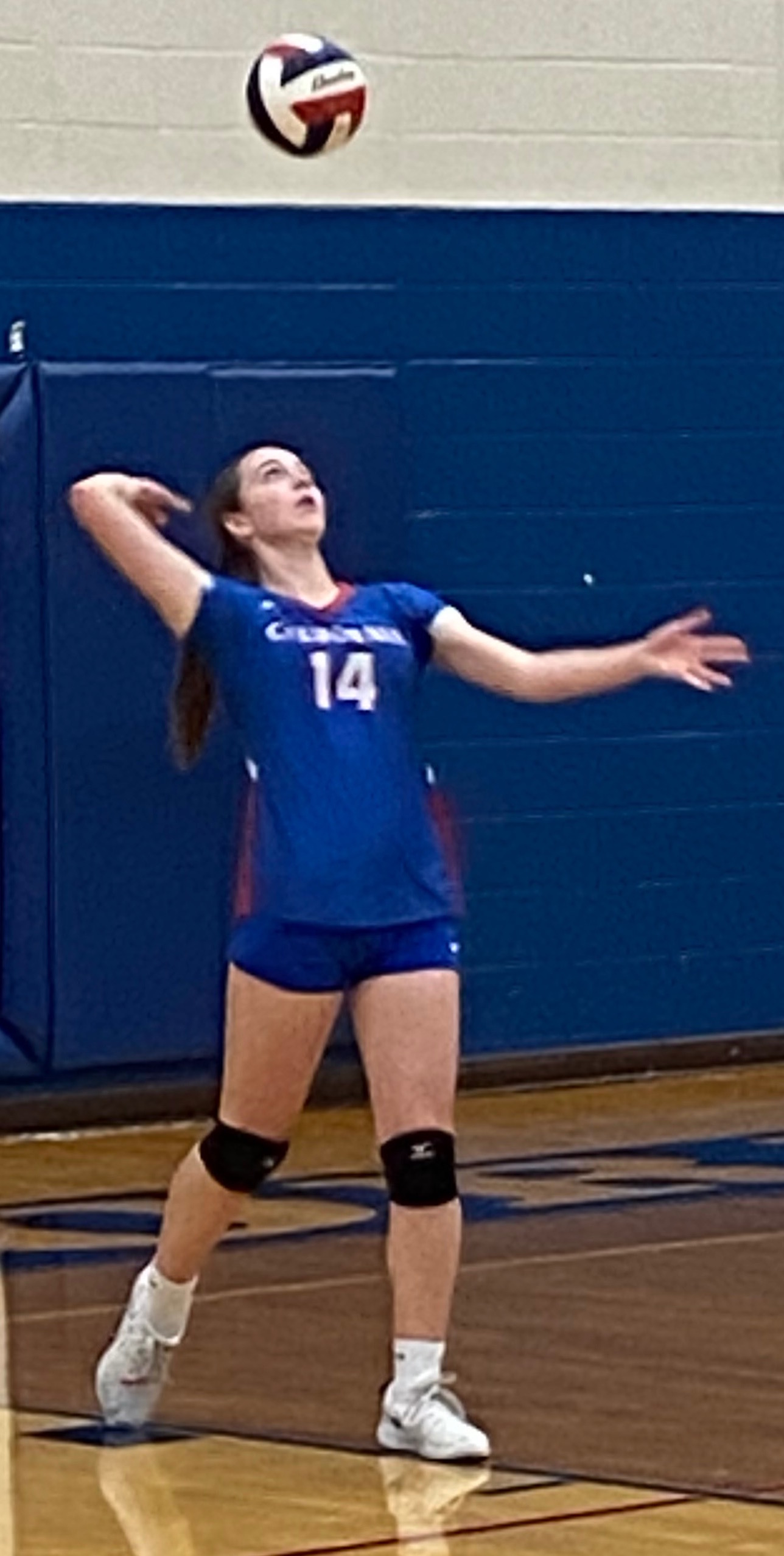 Senior Lauren Friedrich serves the ball to Eldon in the first set in Thursday's match against the Lady Mustangs. (Democrat photo/Evan Holmes)

Senior Lauren Friedrich gets a kill to put California up 27-26 in the first set against Eldon. Friedrich had a team-high 16 kills on Thursday night. (Democrat photo/Evan Holmes) 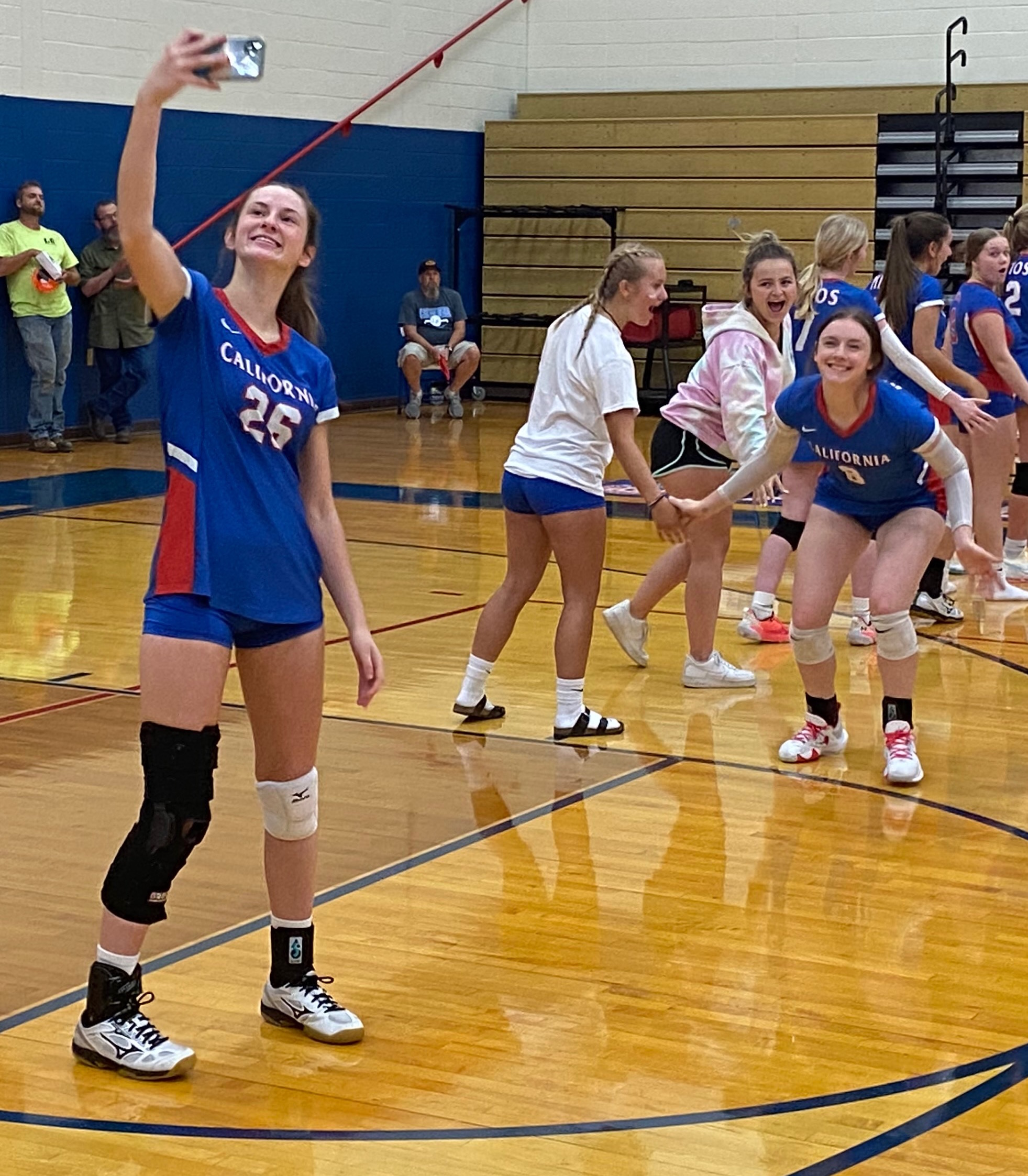