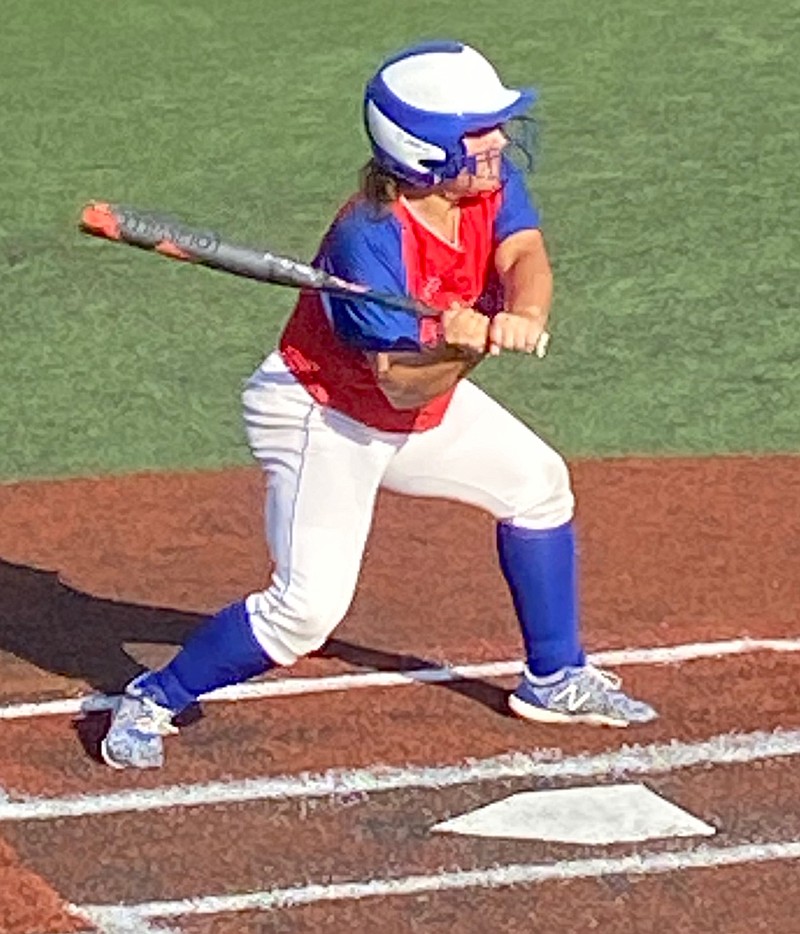 Senior Grace Dampf gives the Lady Pintos their first hit of the game in the third inning against Eugene. (Democrat Photo/Evan Holmes)

California High School softball had been riding a wave of good feelings since the calendar turned from August to September. The Lady Pintos were on a four-game winning streak going into Monday night's home game against the Eugene Lady Eagles. The teams fought into extra innings, where Eugene ended California's winning streak with a 3-2 win.

The Lady Pintos had won all four games in September going into Monday night's game against Eugene. Head coach Steven Stock said the reason for California's winning streak was consistency -- something the Lady Pintos struggled to maintain last season.

Monday night's game was scoreless after two innings, but it was Eugene who drew first blood with a run in the third and the four inning to take a 2-0 lead.

Going into the bottom of the fourth inning, California only had one hit and Eugene's starting pitcher Ashlynn Kliethermes had been making it difficult for everyone to get on base. The Pintos got a runner on base when junior Addie Clay hit a single to right field. Senior Alexa Gunnerson substituted for Clay at first base and later advanced to third base. The next batter, freshman Ryleigh Roellig hit a single down the right field line to score Gunnerson from third to make it a 2-1 game. Roellig then advance to second base on error throw from the third baseman. The next batter, sophomore Kylee Wright hit a line drive double to center field to bring home Roellig and tied the game 2-2.

"You look at the two runs we scored, we got a run or two on base, and then we hit a ground ball or a line drive to get them home. It was timely hitting again and we got a couple of runs," Stock said.

The two teams remained scoreless going for the next three innings and the game went to extra innings. In the top of the eighth inning, Kliethermes led off for the Lady Eagles against California's starting pitch Gabrielle Rorhbach. Kliethermes popped up the 1-1 pitch behind home plate. Three Lady Pintos chased down the ball. Catcher Addie Clay went for the catch. But the ball hit the ground just a few feet in front of her and the at-bat continued.

Two pitches later, Kliethermes made the Lady Pintos pay for their mistake with a single to center field. Junior Aly Haeffner came in as a courtesy runner for Kliethermes. Sophomore Shaelyn Boessen then hit another single to right center field to put runners on the corners for Eugene with no outs. Junior Kaylee Kampker was the next batter for Eugene. Kampker swung at the 0-1 pitch and hit an infield single. Despite a change for a play at the plate, Rohrbach's throw home came late and Boessen gave the Eagles a 3-2 lead.

California got out of the inning two batters later and now needed to ger another run off of Kliethermes to extended the game. Despite a two out doubl from freshman Peyton Dunham, Eugene made the final out on a pop-up to third base and California's four-game winning streak ended with a 3-2 loss to the Lady Eagles.

"I don't think Addie's missed catch in the eighth is what cost us the game. Yeah, you do have to make that play. But the bottom line is when you go to eight innings, you've got to be able to score more than two runs in one inning, Stock said. "That's seven innings where we didn't put anything across the board. It's pretty hard to win when you go seven shutout innings. Give them credit. Their pitcher threw a whale of a game. I'm not sure how many, but we flew out about 10 or 15 times. But like I said, the girls came in and battled. Sometimes you come out and you hit a little better than other days. But that's part of playing softball."

In the loss to the Lady Eagles, California had trouble getting runners on base because they were not putting the ball on the ground. The Lady Pintos had 12 fly outs and pop outs combined against Eugene. Coach Stock wanted to get runners on base with ground ball and line drive hits. As it gives his players a better chance of getting on base.

Despite the disappointing loss to Eugene on Monday, Stock has already seen a positive change in his team. His team is getting more consistency on both sides of the ball. The Lady Pintos have still won eight of their first twelve games and will look to add more wins over the next few weeks after Monday's setback to Eugene.

"These girls have come out and done a nice job and we've competed most of every game. We've had a couple of letdowns. But they came out tonight and played in a great ball game," Stock said. "We struggled at the plate and hit too many balls in the air. When we needed a ball on the ground or line drive to make their defense play, we just couldn't get it done. It's easy to defend when all you're doing is catching fly balls. Sometimes, that's just the way it goes in softball." 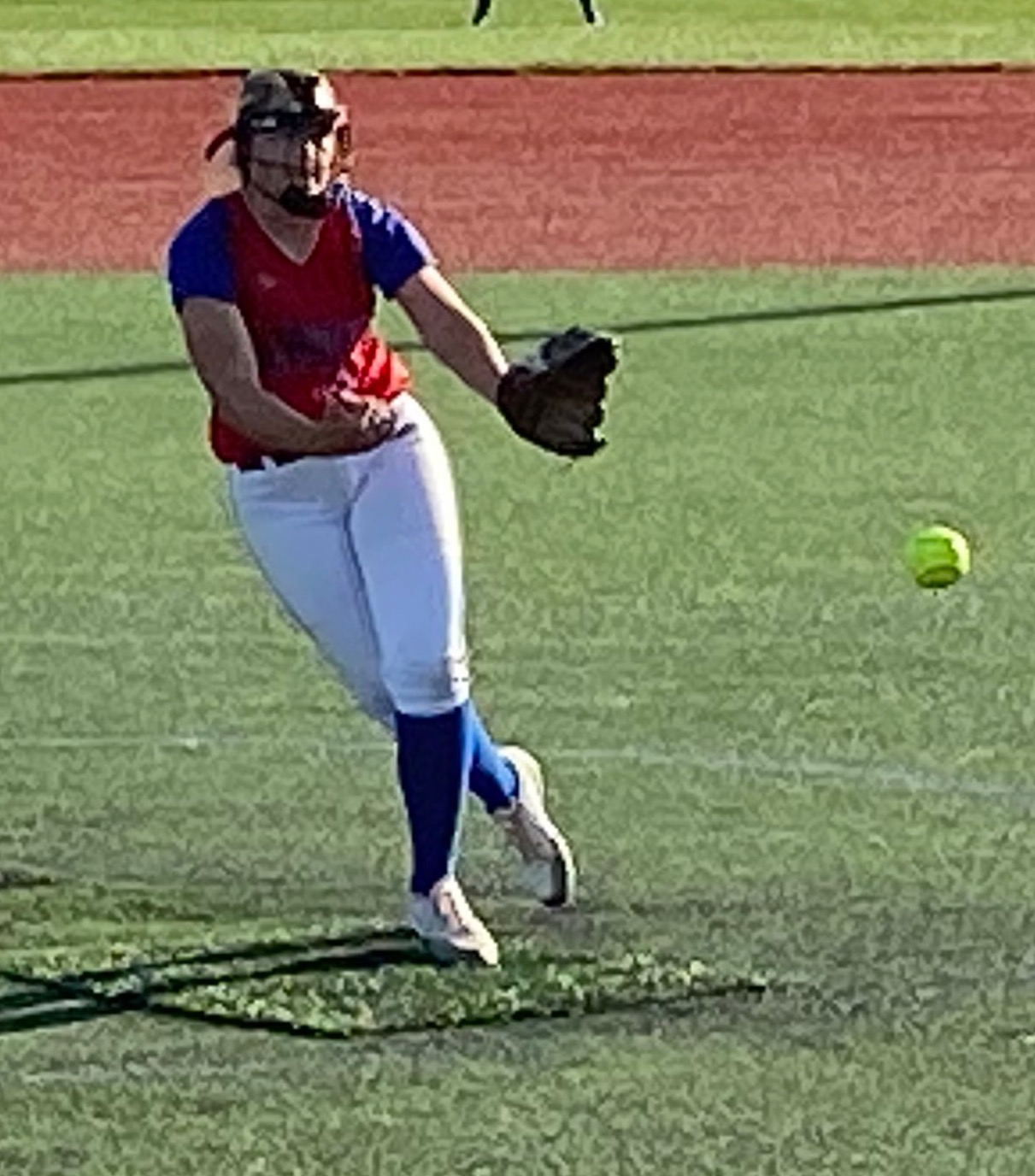 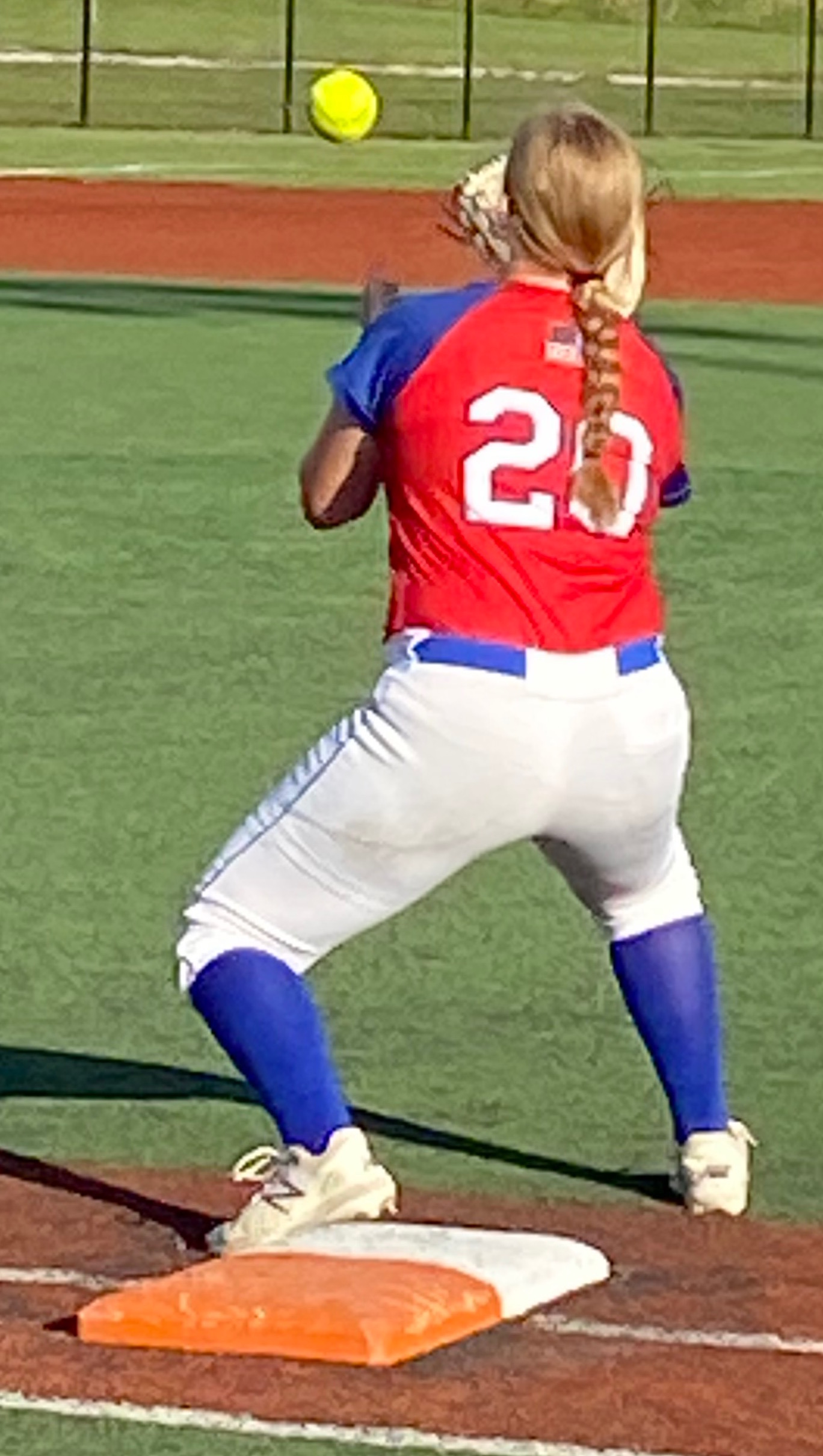 Sophomore Kylee Wright makes an out at first base for the Lady Pintos against the Lady Eagles. (Democrat Photo/Evan Holmes) 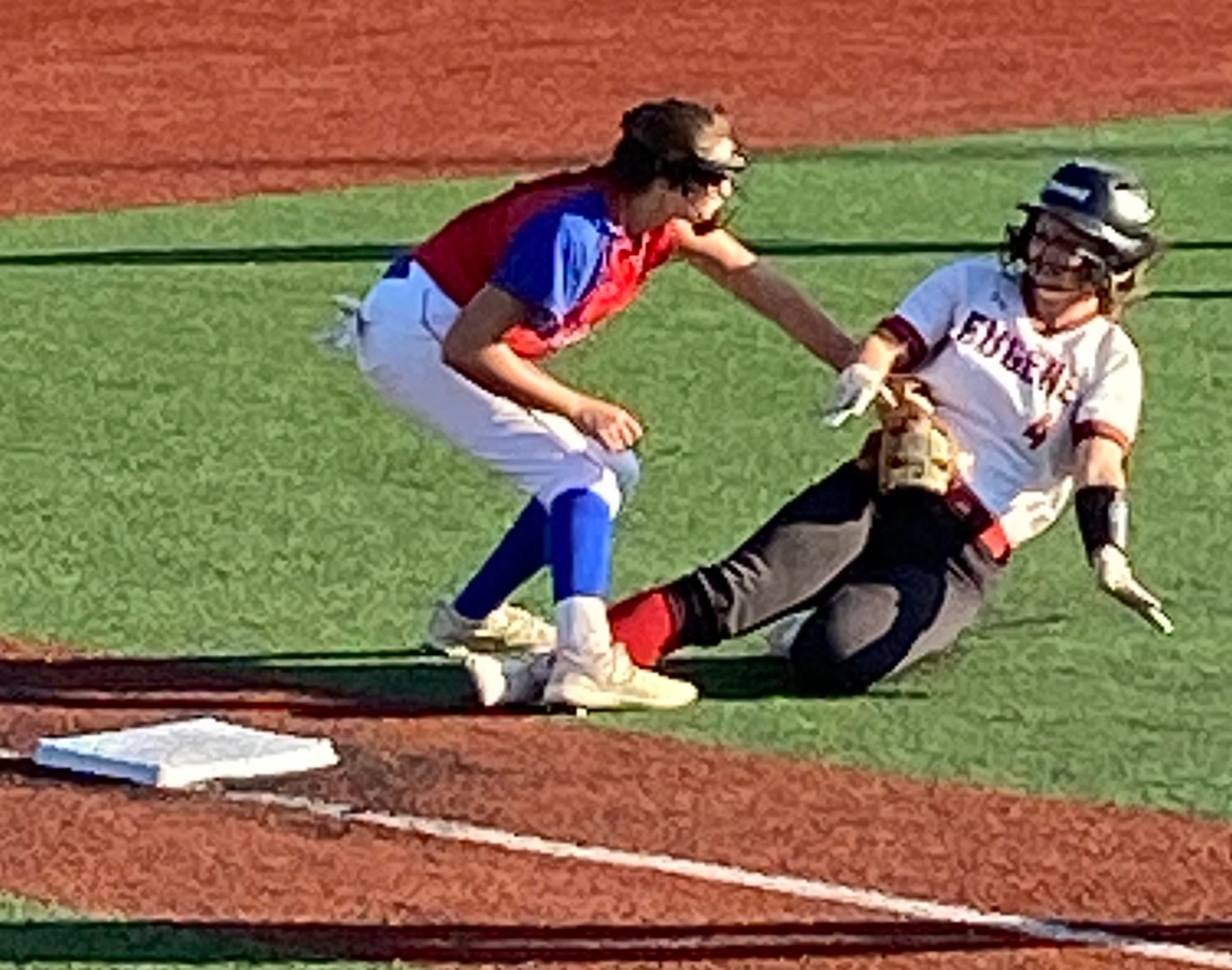 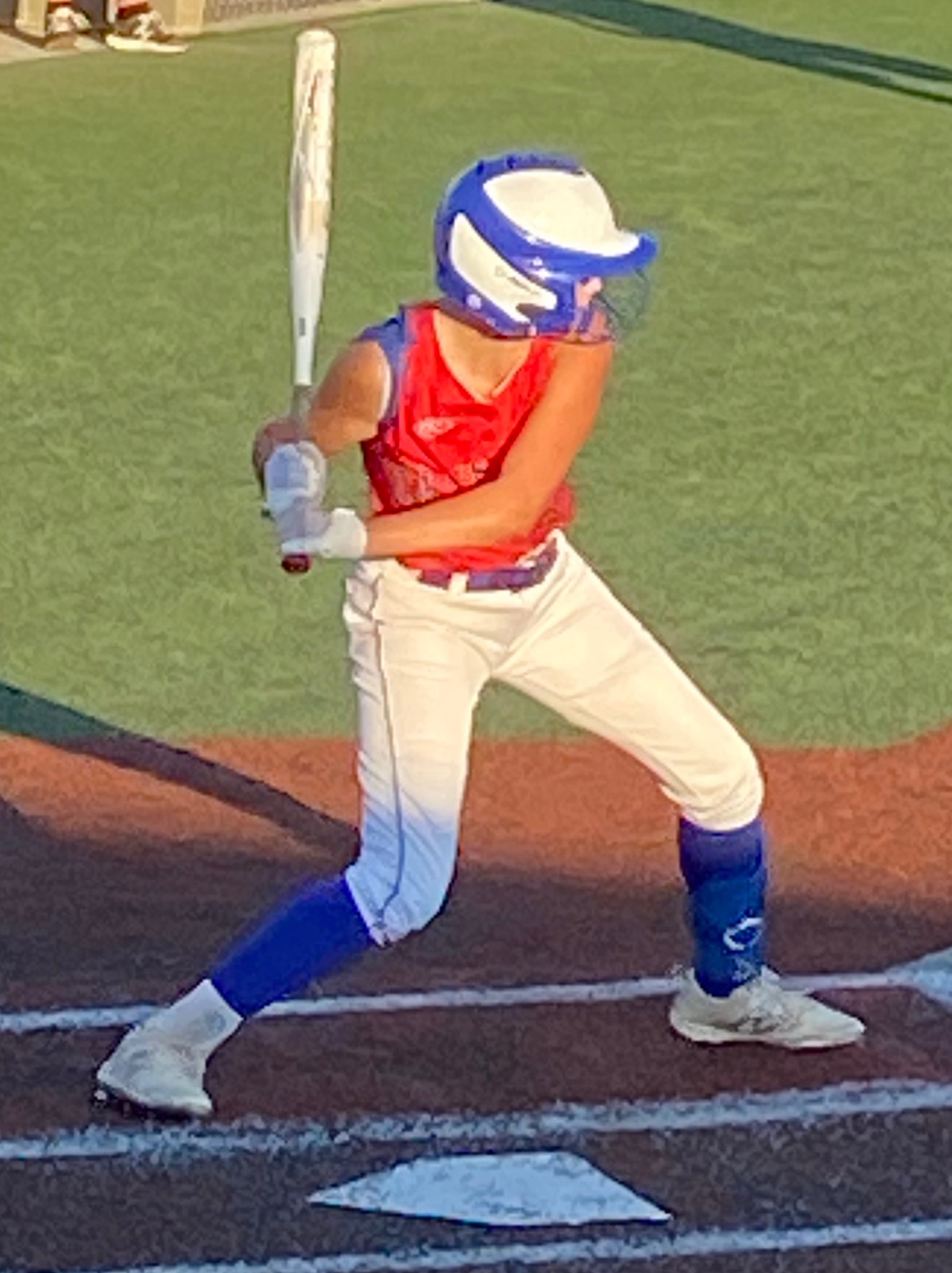