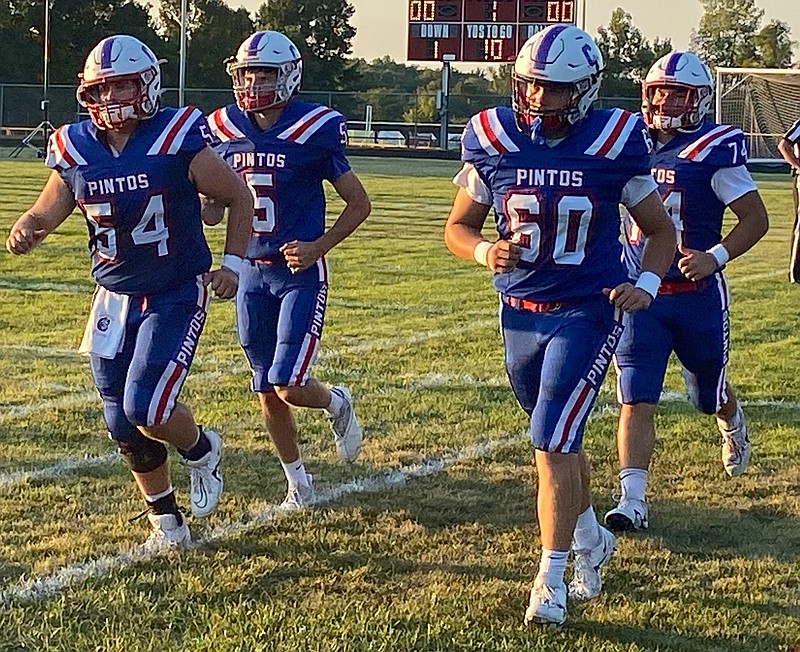 Coming off a bounce-back win against the Fulton Hornets in Week 2, the California Pintos were on the road again last Friday to start the Tri-County Conference portion of their schedule by playing the Southern Boone Eagles.

The game was back and forth from the start with both teams trading leads, possessions and big plays. But in the end, it was the Eagles who got the last score of the game in the final minute to defeat California 29-28 in Ashland.

Last season, the Pintos played the Eagles in the regular-season finale. In that game, California dominated Southern Boone for the opening kick, winning the game 66-39 for their first victory against Southern Boone since 2015.

Pintos coach Seth Womack knew this year's Southern Boone team was loaded with firepower. The Eagles are led by wide receiver Chase Morris, who set a school record with 313 receiving yards in the Eagles' 45-42 Week 1 loss to Odessa.

"When it came to defending Morris, we wanted to make sure he was always accounted for," Womack said. "He is a very good player and he's going to get his yards. But you have to stay near him at all times and make him earn every yard he gets."

Both teams traded interceptions to start the contest, with junior defensive back Cameron Combs coming away with the interception for California. After Morris picked off California quarterback Martin Kilmer on the ensuing drive, he broke the scoreless tie with a 20-yard touchdown catch from quarterback Austin Evans. The extra point split the uprights to give the Eagles a 7-0 lead with 4:04 to go in the first quarter.

For the first time this season, California had to recover from giving up the first score of the game. But the Pintos wouldn't be behind for long.

After forcing the Eagles to punt early in the second quarter, the Pintos got a big play when running back Tyler Oden found a hole and took the ball 69 yards to the Southern Boone 12-yard line. A horse-collar penalty on Southern Boone moved the ball half the distance to the goal line at the 6-yard line.

Four plays later, Martin Kilmer sneaked the ball into the end zone on a 1-yard quarterback keeper touchdown to give the Pintos a 14-7 lead.

Just before halftime, Southern Boone responded to Oden's run and Kilmer's touchdown with a 5-yard touchdown pass from Evans to Kellen Ash. But California held the lead, 14-13 after the Eagles missed the extra point.

Both team went three-and-out to begin the third quarter. On the ensuing Southern Boone possession, Ash got the ball off a double handoff, confusing the Pinto defense, and the run went 55 yards deep into Pinto territory. Although California's defense came back to hold Southern Boone to a fourth-and-9, the Eagles converted a 15-yard touchdown on a pass from Evans to wide receiver Tristan McKee. Southern Boone they made a 2-point conversion to go up by seven at 21-14 with 8:08 to play in the third quarter.

On the next drive, California had the ball on a second-and-9 at its own 37-yard line. Martin Kilmer threw a short pass to Walker Friedmeyer, who made the catch, got away from his defender and -- with nothing but green grass ahead of him -- took the ball 57 yards to the Southern Boone 6-yard line.

Three plays later, California tied the game at 21 on a 1-yard touchdown run from Oden.

In the fourth quarter, California jumped back on top. After three failed pass attempts to Ayden Bryant in the second half, Martin Kilmer connected with Bryant on a 41-yard touchdown pass and took a 28-21 lead with just under nine minutes to play. Bryant has scored a receiving touchdown in each of California's first three games.

After Bryant's touchdown, the Pinto defense forced Southern Boone into a turnover on downs after linebacker Colin Althoff stopped a run up the middle on fourth-and-2.

California went three-and-out on its next drive and Southern Boone had another chance to tie or take the lead with just under five minutes remaining in regulation.

Althoff once again made a big play at the start of the drive by sacking Evans for a 6-yard loss. But the Eagles saved the game when Evans found wide receiver James Basnett for a 30-yard catch on fourth-and-8.

With less than a minute remaining, Evans found Morris all by himself in the end zone for a 10-yard touchdown pass. Still trailing 28-27, Southern Boone coach Mark Ross took a timeout to decide whether to go for the tie with an extra points or two go for the win with the 2-point conversion.

Ross decided to go for two points to take the lead. California's defense had Evans on the run on the 2-point try, and it looked like Evan would be tackled short of the goal line. But at the last second, Evans found Ash in the left corner of the end zone. Ash made the catch, the conversion was good and Southern Boone now led 29-28 with 55.7 seconds remaining.

It was going to be an uphill climb for the Pintos, but California still had one more chance to win with less than a minute and two timeouts left.

Out of nowhere, the Pintos found momentum and got all the way to the Southern Boone 18-yard line with 4.1 seconds remaining. California was too far away for a game-winning field goal, so it was touchdown or bust for the Pintos.

Martin Kilmer took the snap and threw to a Pintos' receiver in the right corner of the end zone. The pass went off the intended receiver's hands and fell to the ground for an incomplete pass and Southern Boone won the game.

"I told the guys after the game that we needed to keep our heads up and put this game behind as quickly as possible," Womack said. "We played a good game. We just ran out of time at the end."

One of the games within the game was the amount of penalties against both teams. Southern Boone had 11 penalties in the game, including nine false starts, while California had only five penalties. Womack was disappointed his team was not able to capitalize off those yards.

"It's frustrating to lose to someone, regardless of how many penalties they have," Womack said. "We have to capitalize on our opponents mistakes. All we can do now is go back to watching film, evaluate it and develop a plan to fix our mistakes."

The Pintos will look to once again have a bounce-back game this Friday when they play the Blair Oaks Falcons (3-0), ranked No. 2 in Class 2 in the Missouri Media Rankings.

California will once again be in the position of the underdog against Blair Oaks, but that isn't a role Womack and his team hasn't been in before.

"I think we are always an underdog," Womack said. "We are the second-smallest school in our conference by enrollment, so we always have to have that approach and continue to work harder than our opponents and do what we do efficiently."

The Pintos and Falcons kick off at 7 p.m. Friday night at Riley Field.

The California pintos run onto the field. Ready to go to battle with the Southern Boone Eagles. (Democrat Photo/Evan Holmes) 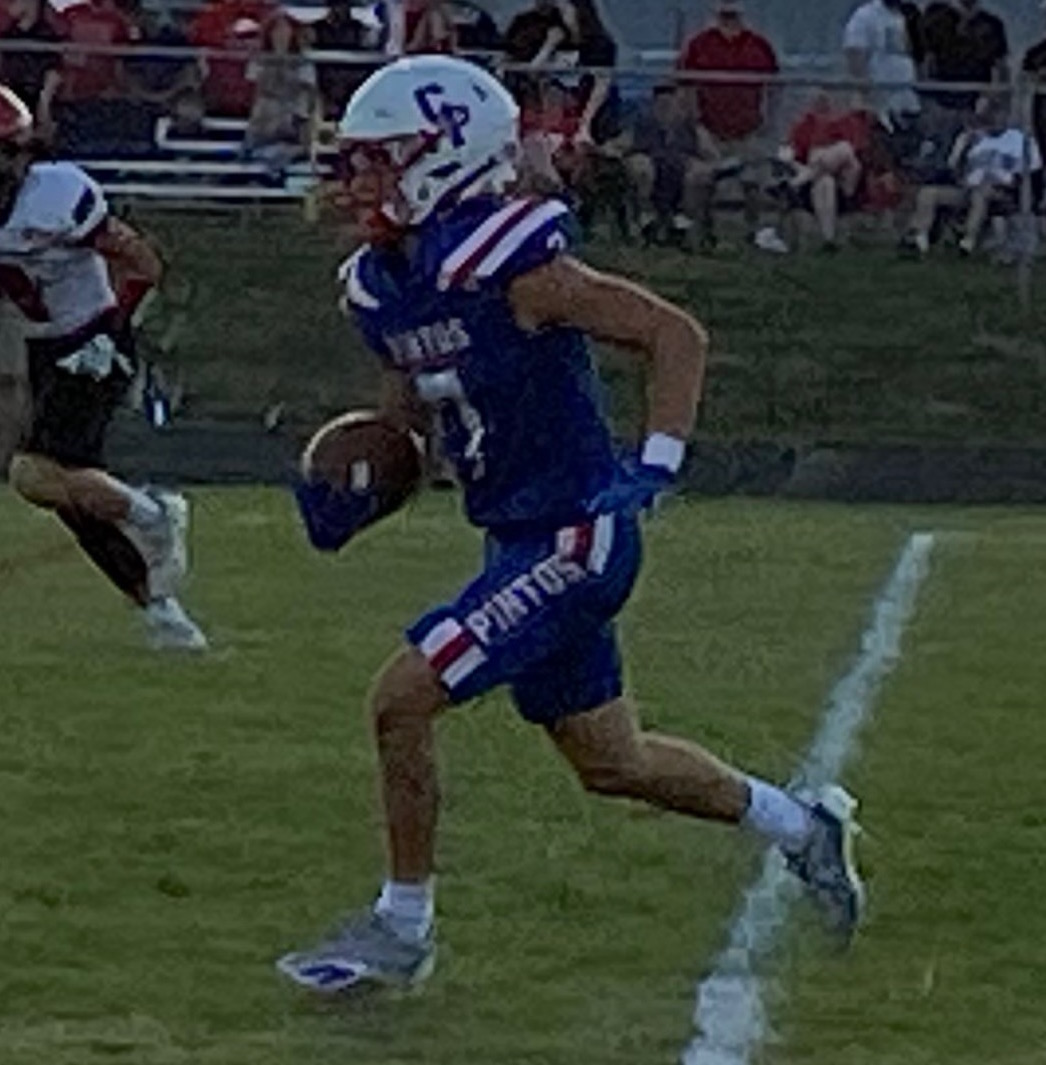 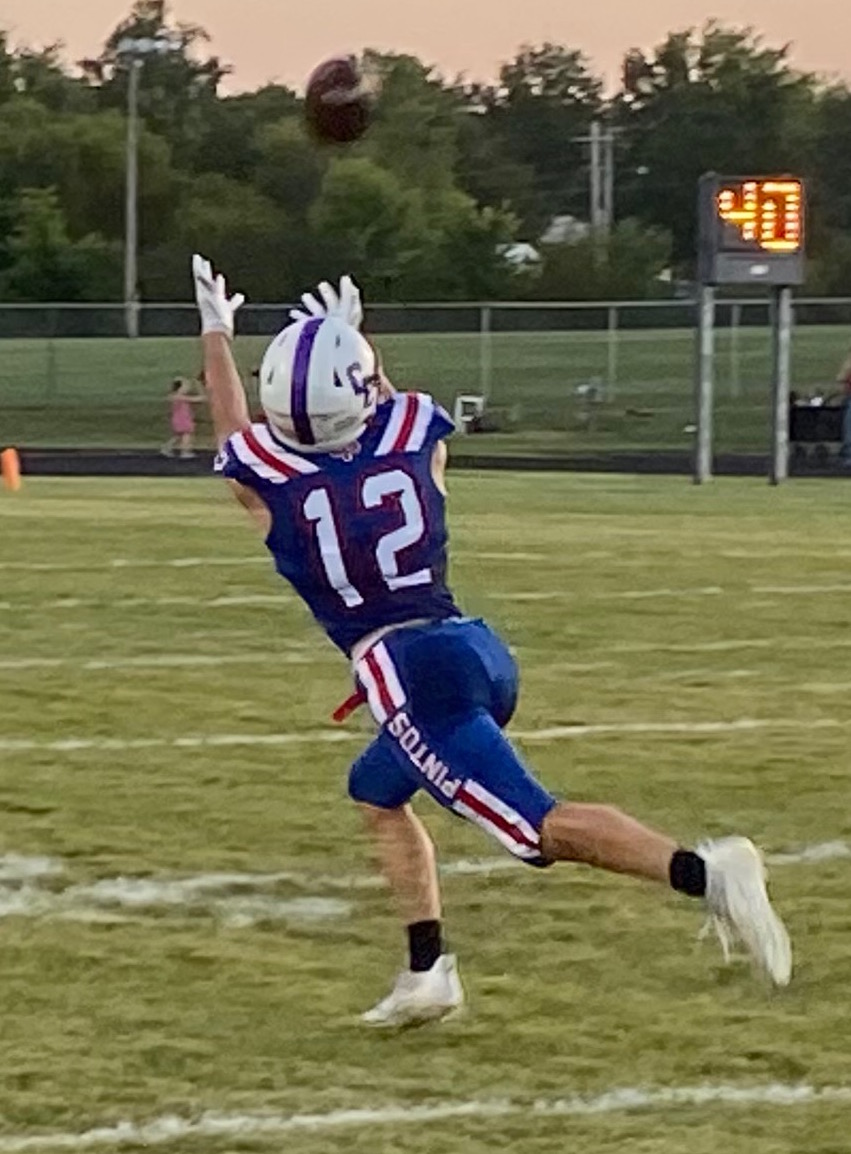 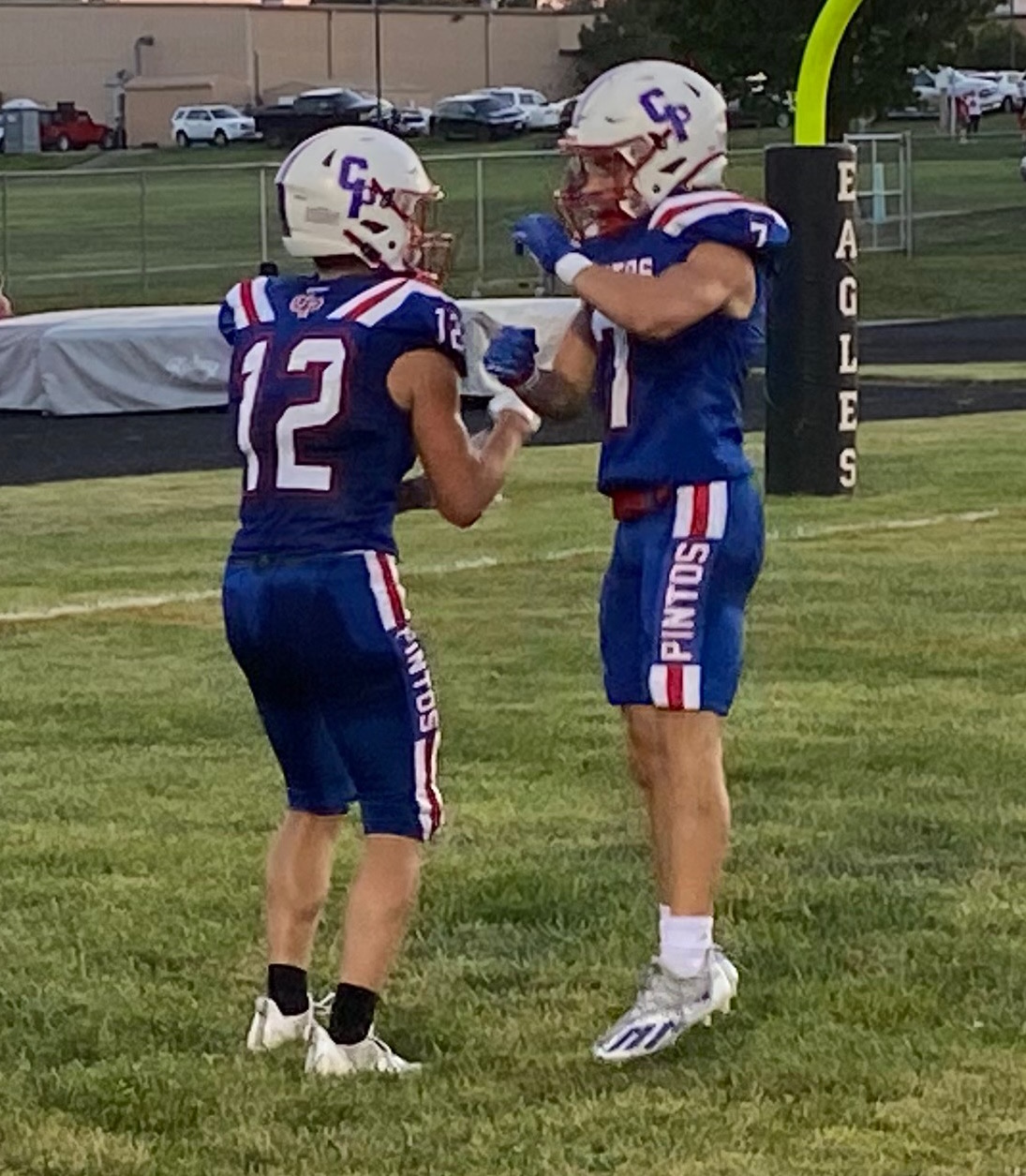 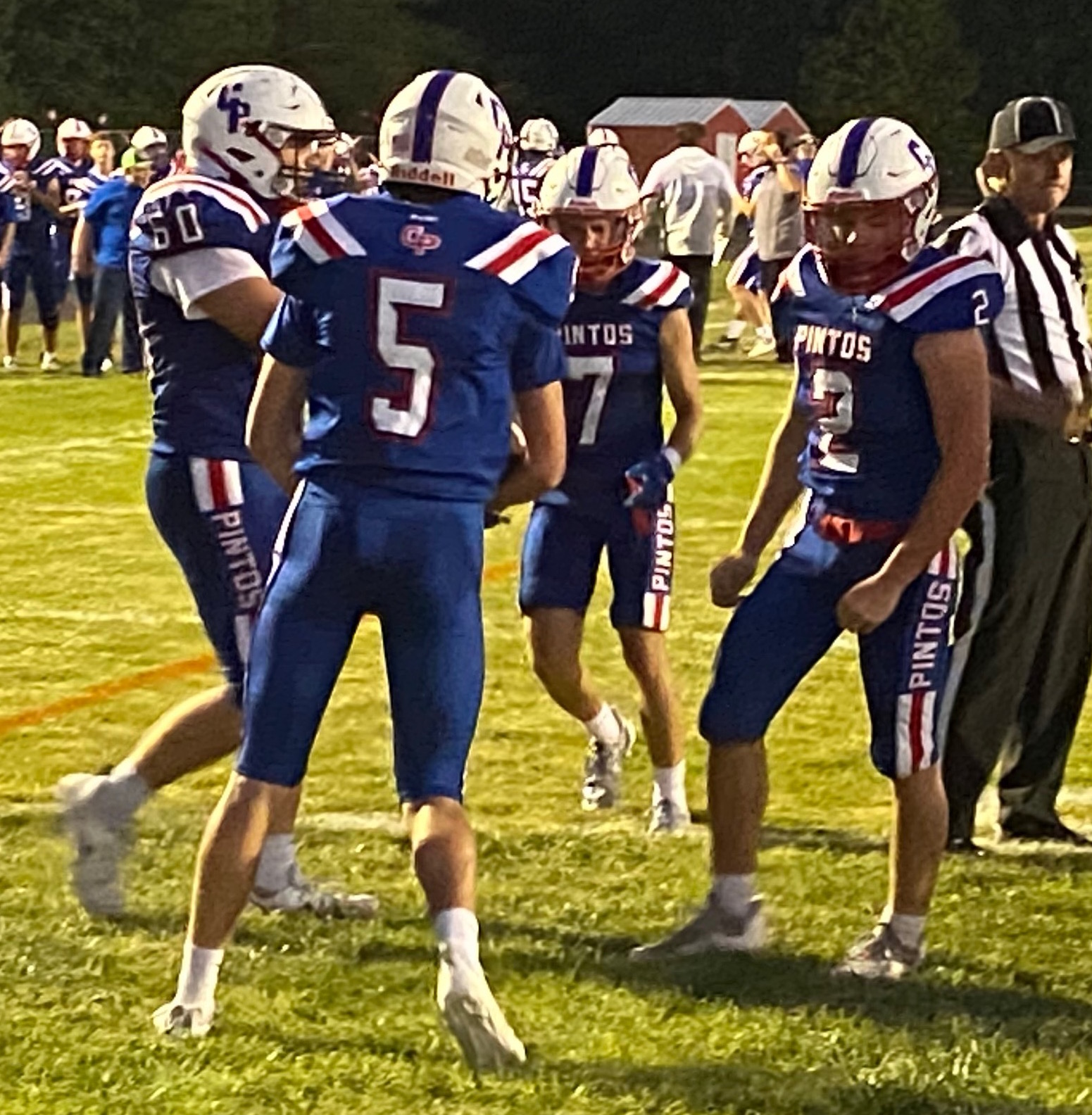 Junior quarterback Martin Kilmer converts a fourth down run for a touchdown to put California up 14-7 in the second quarter. (Democrat Photo/Evan Holmes) 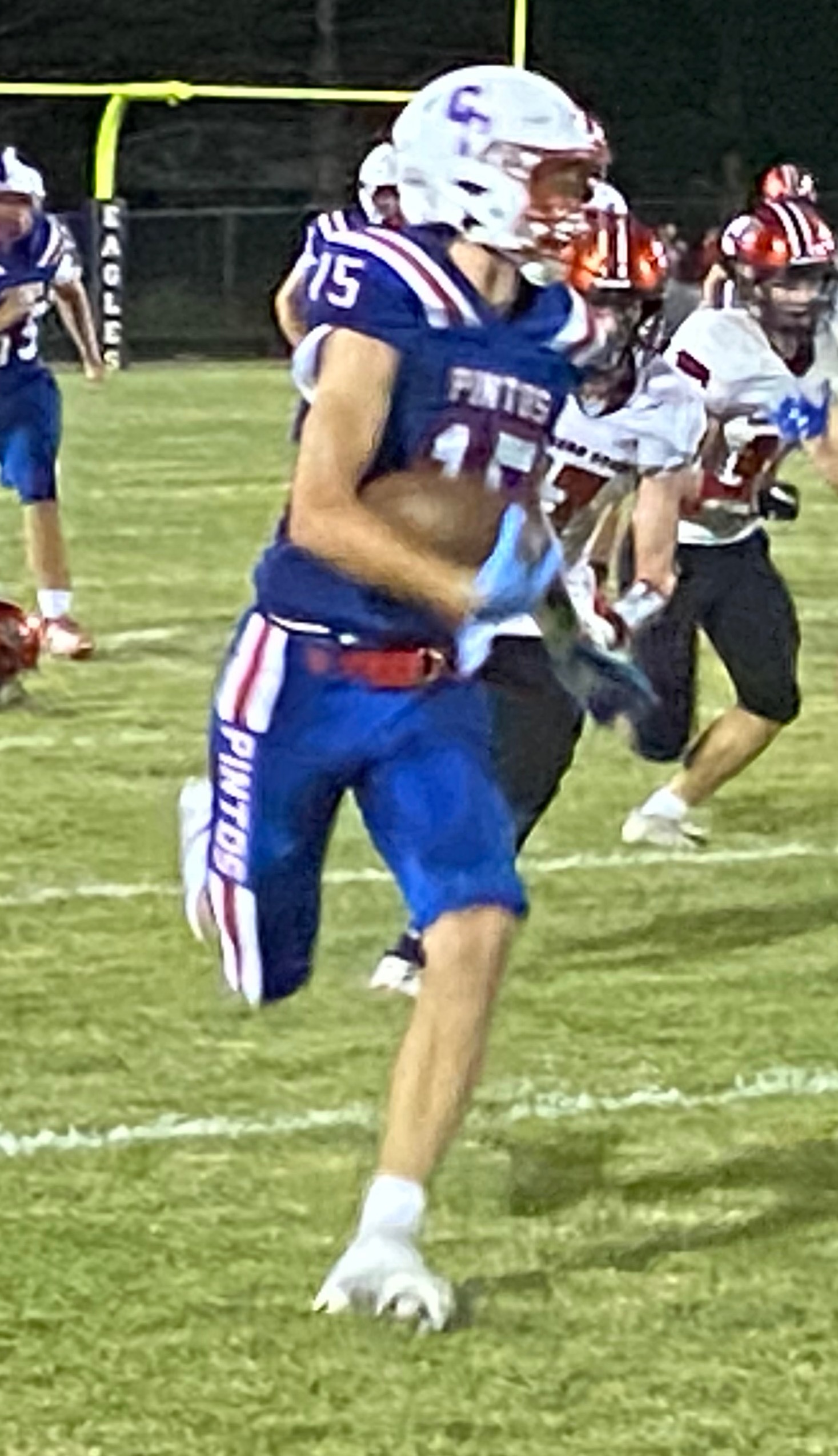 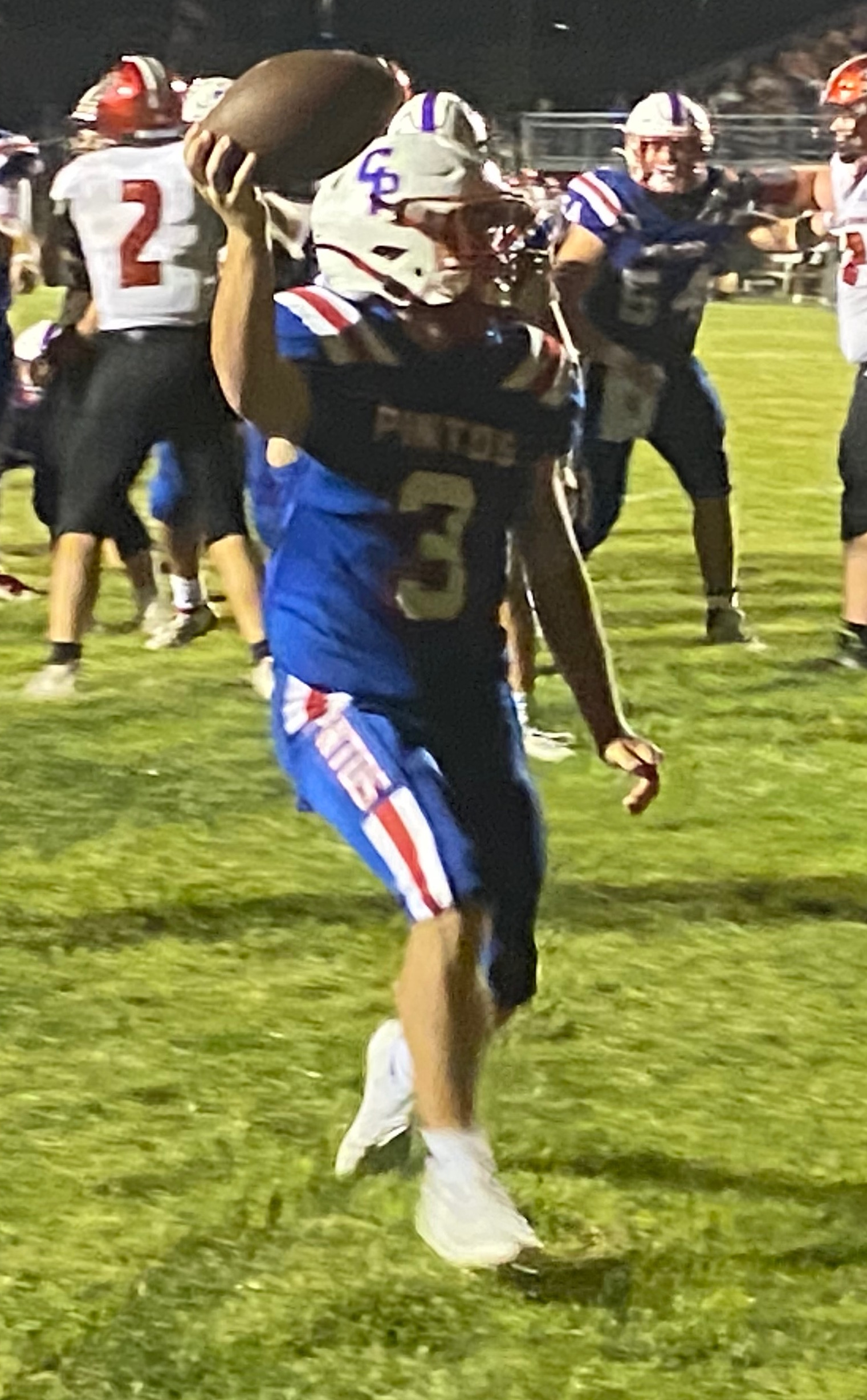 Sophomore running back Tyler Oden runs the ball in for a one-yard toudown to tie the game 21-21 in the third quarter. Oden had nine carries for 85 yards against Southern Boone. (Democrat Photo/Evan Holmes)