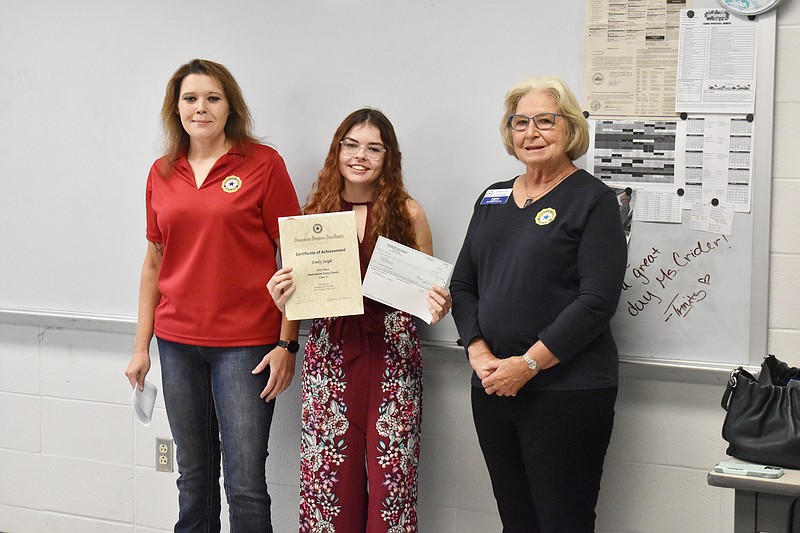 A Russellville student has been rewarded for getting out of her comfort zone.

Jurgle's essay responded to the prompt, "How can we support families who provide care to their veterans?"

"Miss Crider's been encouraging me to do a lot," Jurgle said. "She knows I'm a good writer. She pushes me to do more, get out of my comfort zone."

For the essay, Jurgle drew inspiration from her mother -- a traveling certified nursing assistant who helps care for veterans. In the essay, she talks of a community uniting to care for veterans and their families by creating an organization staffed by volunteers from companies, churches and medical responders to offer services to help veterans, such as medical services. Volunteers would have a designated area and tasks and would be reimbursed with meals and pay for mileage.

Being a part of a military family was another inspiration, Jurgle said. She wondered what would happen if something happened to her aunt, who is currently deployed in the Navy, and her family wasn't able to care for her.

Paula Harmon, chair of the essay contest for Unit 5 of the American Legion Auxiliary of Jefferson City, said it was clear why Jurgle's essay won at all three levels.

"I cannot speak for the district or state committees, as I do not serve on them, but I know her words touched those of us on the local unit committee, and I imagine the reason she won the state competition was the very reason she won at the local level: You spoke from the heart," Harmon said.

When Jurgle found out about winning, she said the first thing she did was reach out to the person who inspired her to enter the contest.

"The first thing that I did when I found out is I texted Miss Crider ... in all caps with how I won or something, and I thanked her for pushing me to do this," Jurgle said, adding the essay took months to complete, which she finally finished at 1 a.m. after work one day.

"It is so amazing to see students who are finding the power within their writings," Crider said. "She has a gift, and it needs to be shared."

From the state level, Jurgle will compete for a regional award.

Harmon said they had tremendous support from the Cole R-1 School District for the Americanism essay, which is open to students in grades 3-12. She said she received "just shy of 200 essays" from the district.

Dorothy Goodin, president of District 8 of the auxiliary, said the essay contest is a "good, thought-provoking program" to "help you think a little more about our veterans and what we can do for them."

Harmon said the essay is meant to get youths thinking about issues affecting veterans, service members and those around them.

"It gives them the opportunity to research things and to simply think about things that, unless you're part of (a) military family, you don't think about," she said. "These younger people are ... next. They come to take our place. Some of them are going to be servicemembers themselves, and so we just want them to actually think about how they can contribute or maybe even solve some of these issues and problems that they can find."