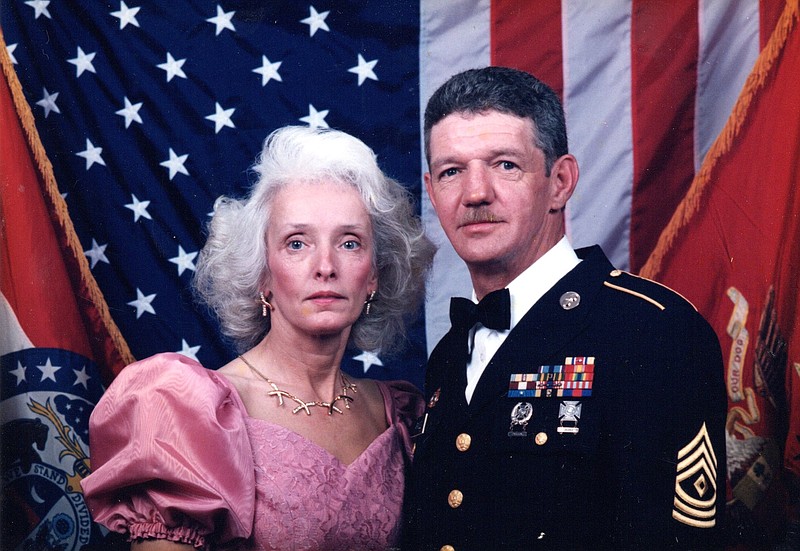 First Sergeant Stephen “Frank” Arnold (retired) is pictured with his wife, Patricia. Arnold enlisted in the Missouri National Guard in 1967 and retired in 2009 as maintenance shop chief at Camp Clark in Nevada. (Courtesy of Frank Arnold)

Having lost two close cousins in the Vietnam War, the mind of a young Stephen "Frank" Arnold weighed heavily with grief and concern as he prepared to graduate from high school in Lamar in 1967.

Wondering if the military draft would result in similar consequences, the father of a friend who worked at the local armory informed him the Missouri National Guard would soon have a couple openings in one of the units stationed there.

After much consideration, he made a decision that eventually resulted in a lengthy and rewarding career, which provided him with a fine balance between a life as a soldier and a civilian.

"I applied and was put on a waiting list for the Missouri National Guard when I graduated in May 1967, and was called up the following October," Arnold recalled. "The local unit was the detachment of a tank battalion, so I was sent to Fort Knox, Kentucky, for my basic training and remained there for advanced instruction as an armor crewman."

Arnold said they trained on the M48A1 Patton tanks. While there, they witnessed the introduction of the newer M60 tank, but never had the privilege of training with them. When his armor school ended, he returned to his unit in Lamar and discovered a change had occurred during his absence.

"The unit converted from armor to engineers, and I was placed in an engineer slot," he recalled.

"It was a detachment of the 203rd Engineers out of Webb City," he added.

As a traditional Guardsman, he participated in once-a-month drills in addition to summer camps, all while working full-time as a mechanic at a local Ford garage. But in 1974, he was hired full-time at the maintenance shop at Camp Clark, beginning a long and rewarding experience at the Missouri National Guard training site in Nevada.

The following year brought with it a minor disaster that earned Arnold an unanticipated accolade. The state highway department was expanding U.S. Highway 71 from two to four lanes. Excavation had resulted in a large brush pile being stacked near Camp Clark, which was then lit on fire by construction contractors.

"There were two big buildings on Camp Clark near the highway," Arnold said. "They had once been used as horse stables and were later used to store tanks. During this timeframe, they were used to store vehicles and other supplies for the post, like shingles and plywood."

Ashes from the burning pile drifted through the air and caught the wooden building on fire. The old structure quickly erupted in flames, leading to Arnold and his fellow Guardsmen on the camp spending hours fighting the fire and rescuing equipment.

"We got a forklift and chains and began dragging everything out that we could," he said. "We pulled out a fuel tanker that was full of fuel, and by the time we got it out, the taillights were melted and it was steaming from the heat."

For helping fight the inferno and preserving valuable equipment, Arnold was awarded a Missouri Conspicuous Service Medal. His later achievements include being selected the honor graduate of his Advance Non-Commissioned Officer School class in 1982 and receipt of an Outstanding Achievement Award from the St. Louis Globe-Democrat in 1984.

In addition to his full-time work on Camp Clark during the week, as a National Guardsman, he was also assigned to a unit and attended weekend drills, training maneuvers and military schools. Throughout the last 20 years of his career, he served in four different companies under the leadership of 21 different commanders.

He added, "I also had the privilege of doing tours in Alaska, Germany and Guatemala."

In the early years of working on the camp, Arnold said, there was little specialization for those assigned to the maintenance shop. One morning, he may have been in the shop working on a vehicle, but the next day, he may have been digging a culvert or using heavy equipment to grade a road.

The years passed quickly with the medley of training schools, full-time employment on Camp Clark and spending time with his wife and four children (including one son who later retired from the Missouri National Guard). Arnold retired as a first sergeant prior to his 60th birthday in 2009, having accrued more than 41 years of service.

He and his wife, Patricia, have remained actively engaged in their local community and, in 2014, were voted "Citizens of the Year" by the Rotary Club in Vernon County. Arnold was also a finalist for induction into the Missouri National Guard Hall of Fame in 2021.

His military career could have taken many different turns when considering the shifting mission of the National Guard within the context of global deployments. But as Arnold explained, he remains grateful for the experiences he was given, most notably the balance between serving as a soldier and concurrently embracing live as a civilian.

"I've always loved the military and being able to do something interesting every day while learning so much along the way," he said. "And working at Camp Clark, I was able to meet so many great people who came through there for training and helped them out whatever way I could."

He continued, "Back then, I could be a soldier on the weekends and work a regular job during the week as a civilian."

Pausing, he added, "That type of structure always fascinated me." 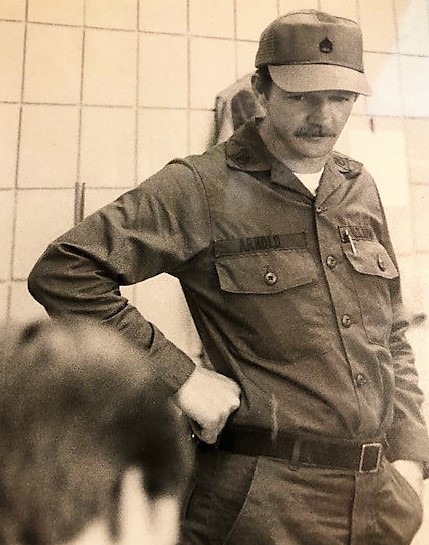 Stephen “Frank” Arnold was employed for 35 years at Camp Clark and in 1975 helped battle a fire that destroyed storage buildings on the post. (Courtesy of Frank Arnold)