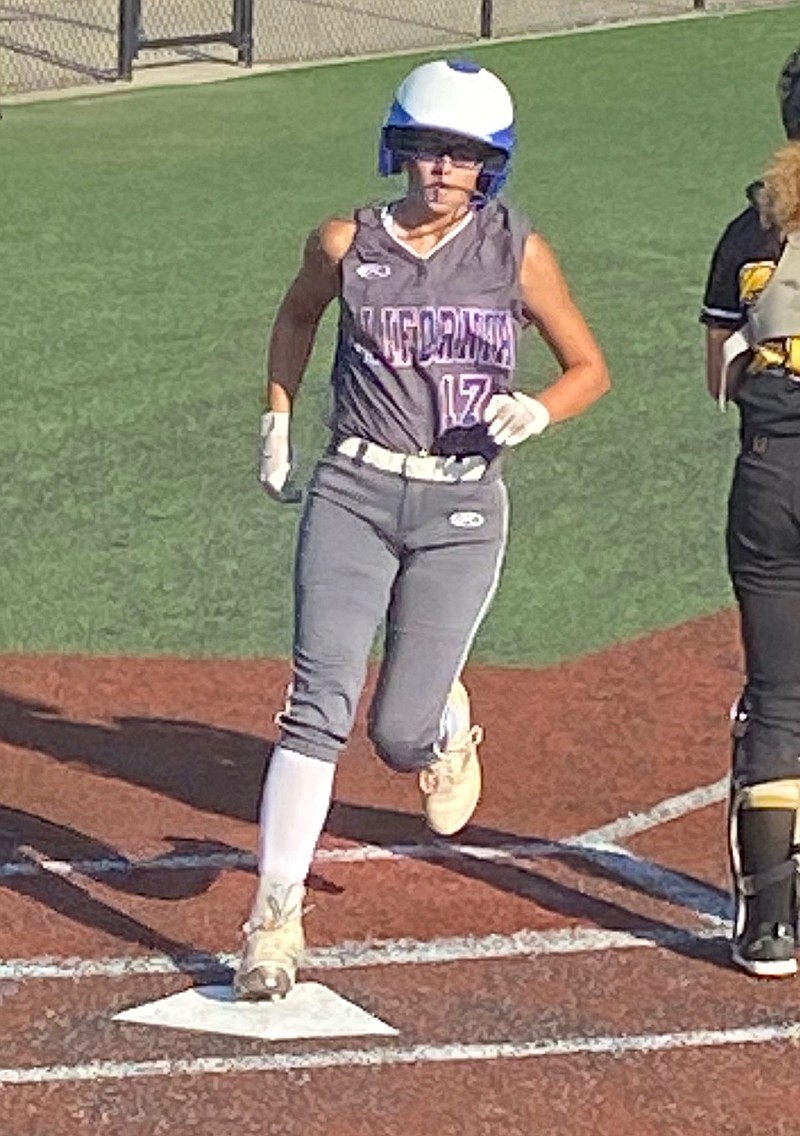 A day after their 3-2, eighth-inning loss to the Eugene Lady Eagles, the California Lady Pintos returned to their home field for another game and another test against a conference opponent. The Versailles Lady Tigers were in town to take on the Lady Pintos in a Tri-County Conference showdown. California went on to pass their test against Versailles with flying colors, dominating the Lady Tigers from start to finish and ending a four-game losing streak to Versailles with an 8-1 win Sept. 13.

The game against Versailles was a chance for California to get some payback after Versailles knocked them out of the playoffs the year before. But to Head Coach Steven Stock, that 10-1 loss at districts last season was nothing but a thing of the past and had no effect on the present.

"That wasn't part of any thought process we had today. We were just in a situation where we're going to compete for a conference crown and this was the next team we had to face," Stock said. "We play Versailles all the time. I don't want to call it a rivalry or anything like that. But it's a team that you want to go out and play well and win against. So it was nice to get the win."

Just like the Sept. 12 game against Eugene, Stock chose to put senior Gabrielle Rohrbach in as the starting pitcher. Some might have seen this move as a gamble after Rohrbach pitched eight innings less than 24 hours earlier. But Stock said he knew throwing underhanded pitches is easier than throwing overhand pitches. Stock also said some of his pitchers can throw every day, and Rohrbach is one of them.

When the game began, Rohrbach picked up where she left off the day before by throwing the ball over the plate and kept the Lady Tigers guessing, holding Versailles scoreless in the first three innings. On offense, the Pintos were putting their bats on the ball and bringing in the runs. In the first inning, California put three runs on the board off RBIs from sophomore Kylee Wright and freshman Ryleigh Roellig. The Lady Pintos went on to add two more runs in the second inning. Now ahead 5-0 in the third inning, California was in early command of the game and felt they could play the rest of the game with a little less weight on their shoulders.

"When you put three on the board in the first inning, you can play a little bit more relaxed. I think our kids realized our three aspects. We threw the ball over the plate and defended. We knew we were going to be in good shape if we hit the ball, we would be in good shape," Stock said. "Tonight we hit the ball well and last night we didn't, so it was a big difference. We jumped out ahead and it made it easier. But the thing I liked the most is that we kept adding on. Last night, we scored in one out of eight innings. Tonight, we scored in five innings. If you score in that many innings, you give yourself a good chance to win games.

The Lady Pintos ran into some trouble in the fourth inning after the Lady Tigers loaded the bases by giving up two hits and an error with one out in the inning. Versailles cut into the lead by scoring a run on an RBI groundout to shortstop, but California limited the damage to just the one run after a flyout to left field ended the top of the fourth.

In the bottom of the fourth, senior Ella Percival was on third base after hitting a triple. After Wright struck out for the second out of the inning, Percival thought it was the third out and started running to the dugout. The Lady Tigers noticed this and had Percival in a run down. But Percival managed to get back to third base after the third baseman dropped the ball and the inning continued. Percival later scored from third on a single. The Lady Pintos added another run in the fifth and sixth innings to seal the win, finishing 8-1.

"When your opponent makes mistakes like that, you've got to capitalize. If you come out like last night, both teams were flawless, it was a great game. If you take a couple of mistakes away from them and if we hit the ball better, it could've been a different outcome," Stock said. "But the big thing is to throw the ball in the strike zone and defend. The kids have been doing that well and you give yourself good opportunities."

One of the stars of the night for California was Percival, a player who has captured the hearts of teammates, coaches and fans in the California community. Percival couldn't be stopped on offense Sept. 13 as she went 3-3 from the plate with a single, a double and a triple in the first five innings. Percival stepped up to the plate again in the sixth inning, a home run short of a cycle. Percival told Stock about her chance for a potential cycle before her fourth at-bat. Percival swung at the first pitch of the at-bat. She didn't hit a home run to complete her desired cycle, instead hitting a ground ball to third for a potential ground out. But the throw to first base got away and Percival made it to third base standing. Percival scored the eighth and final run of the game for California on a wild pitch. Percival may have been a home run short of a cycle, but she still had one of the best batting nights of her career.

"We had a little conversation because she told me that too," Stock said. "So I just let her go and at the end of that last at-bat at third, when they threw it away and she came over there, I told her, 'Guess what? Most times when you swing to hit a home run, you don't hit the ball very well.' We laughed about it and then we moved on. But what a great kid. She's in the game 99.9 percent of the time and she always brings her best game every night."

"Right now it's our biggest game of the year," Stock said. "Every game you play right now doesn't really matter because right now we want to compete for a conference title. I believe Southern Boone has not lost a conference game yet. We're currently 2-0 against conference teams. So right now, they're in our way and we're going to give them our best shot."

Unfortunately for California, the game against Southern Boone did not go according to plan. The Lady Pintos were held scoreless. Southern Boone came away with a 6-0 victory to remain undefeated in conference play. The team's record now sits at 8-5. California is currently tied for second place in the Tri-County Conference standings with Boonville. 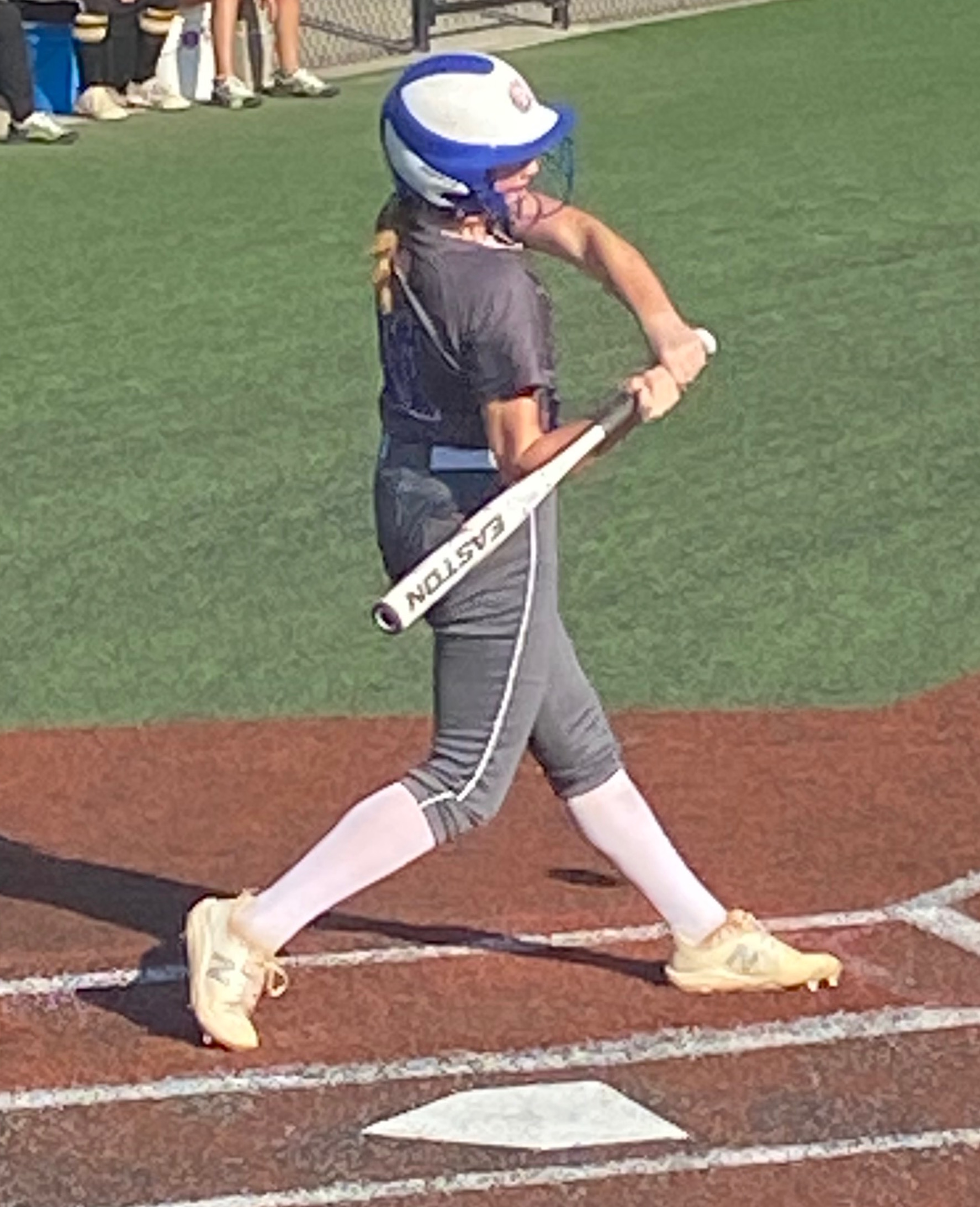 Freshman Ryleigh Roellig hits an RBI single to give California a 2-0 lead on the Lady Tigers. (Democrat Photo/Evan Holmes) 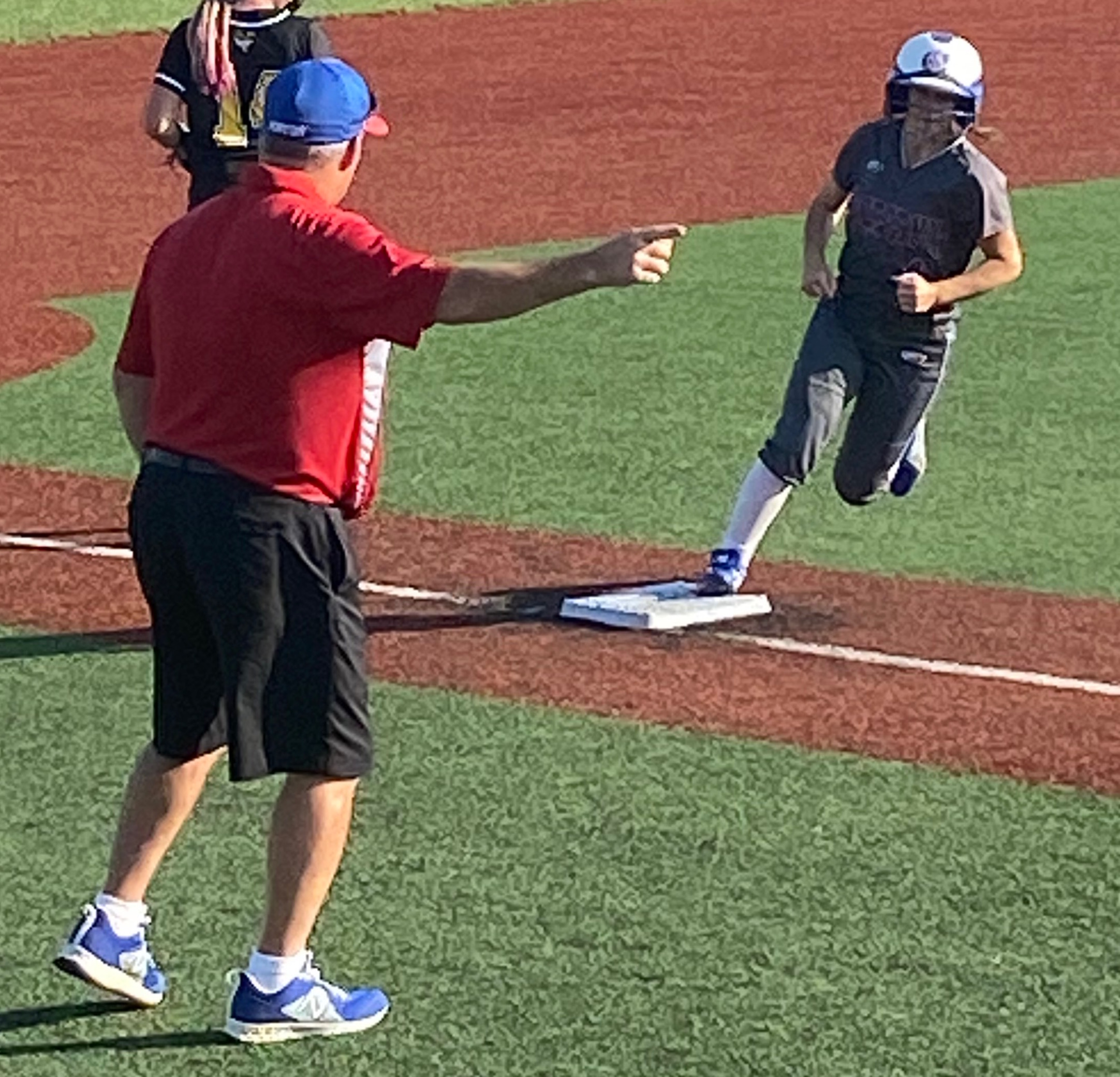 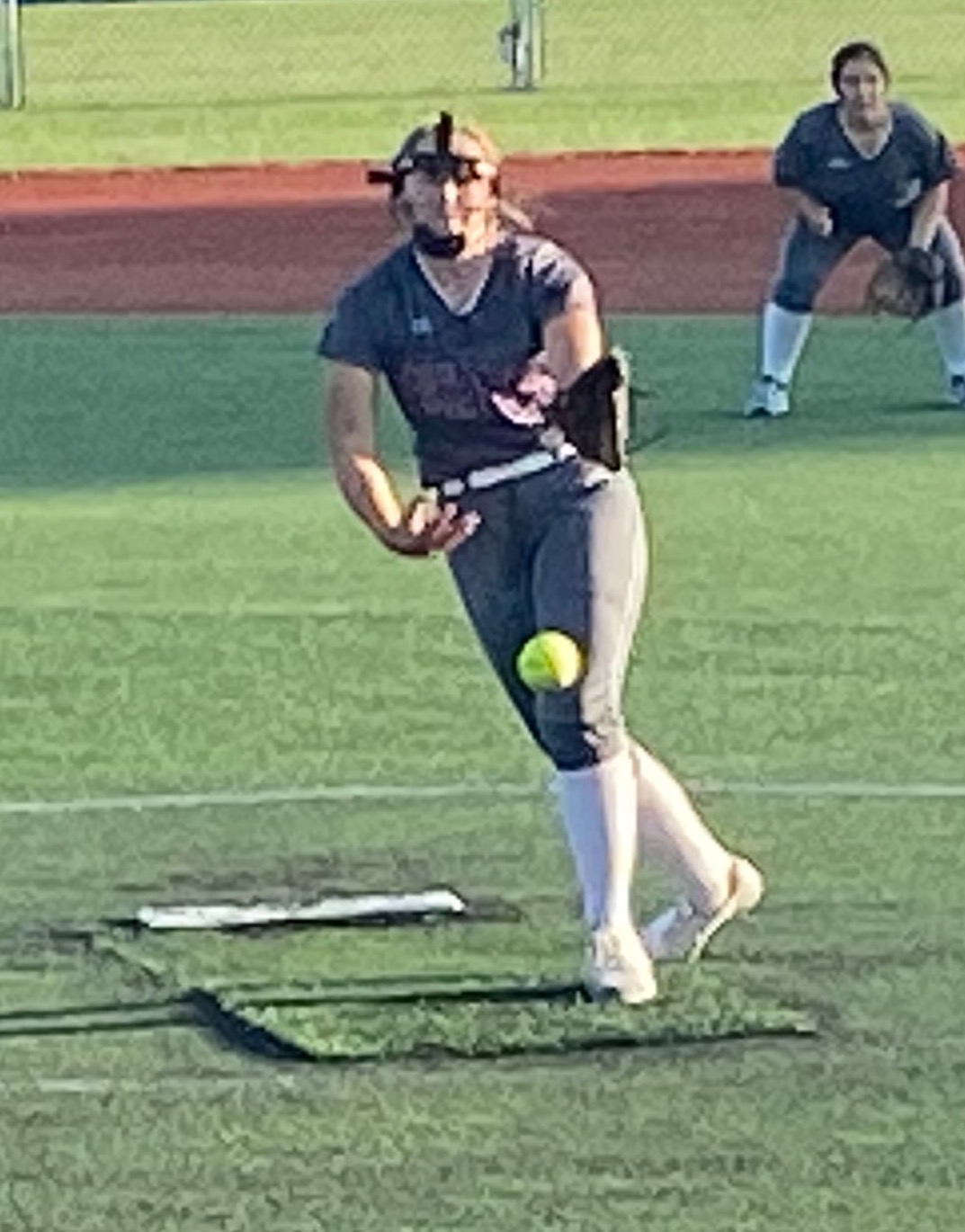 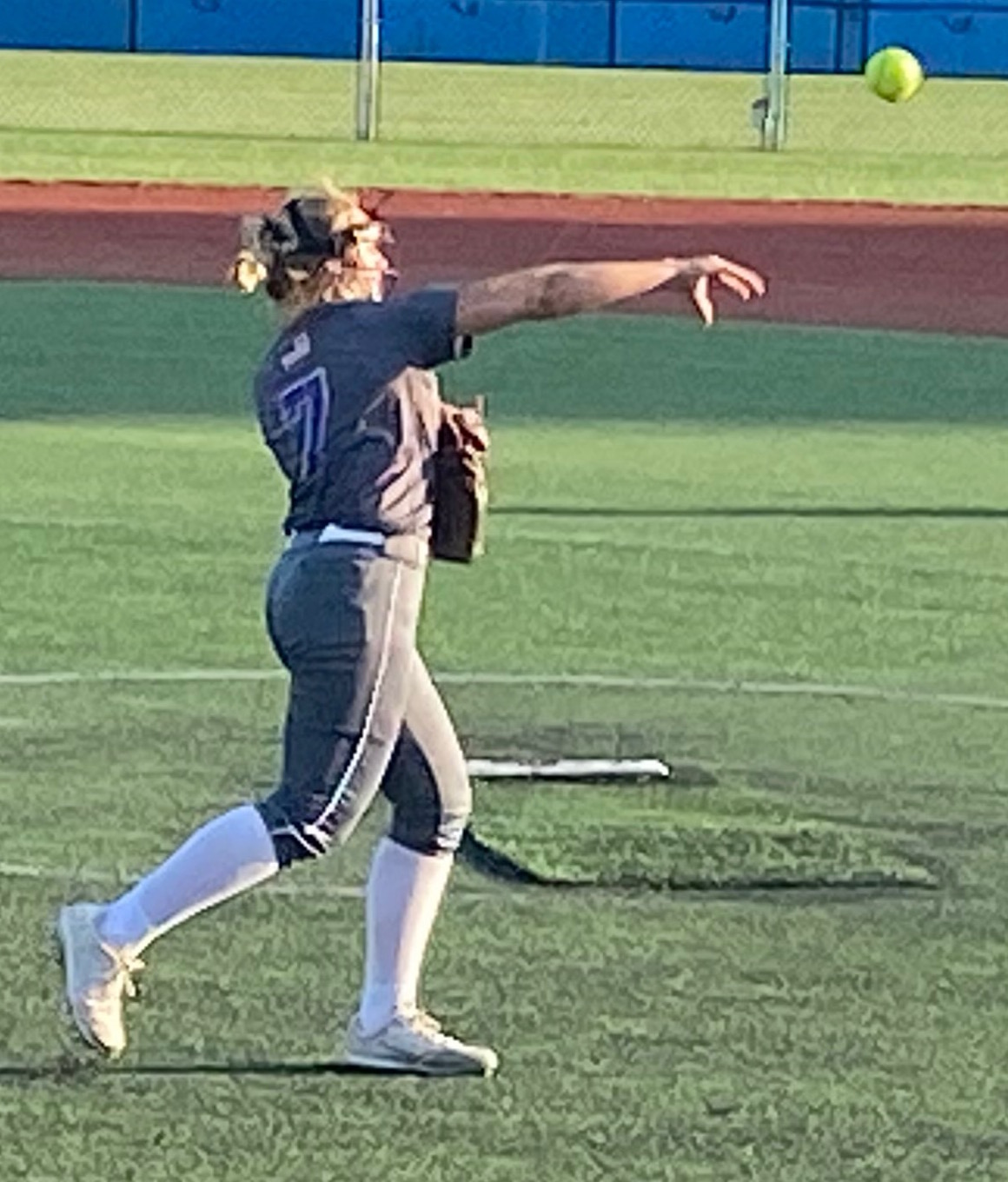 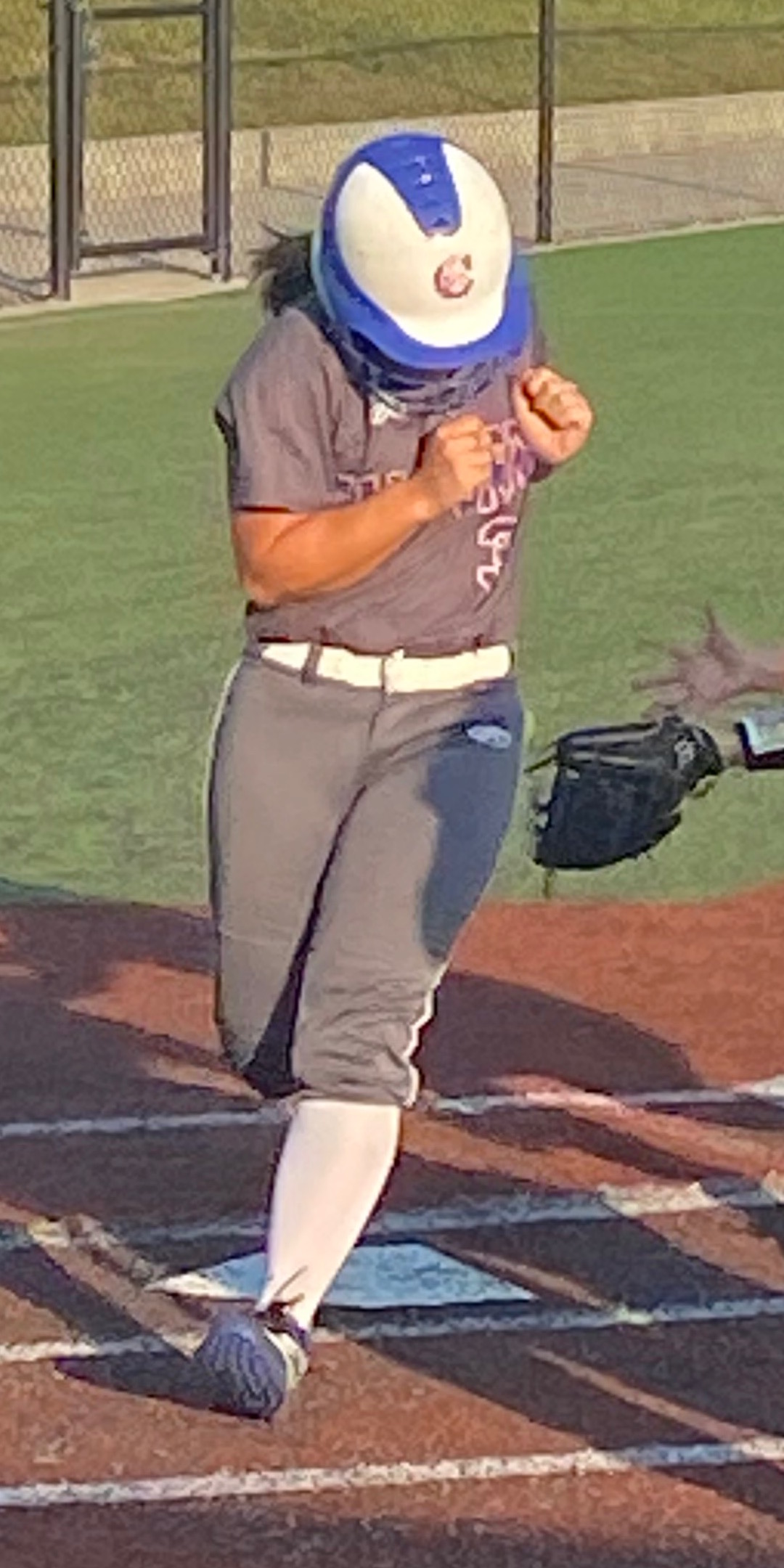 Senior Ella Percival reaches home plate on a wild pitch to give California a 7-1 lead in the sixth inning. (Democrat Photo/Evan Holmes) 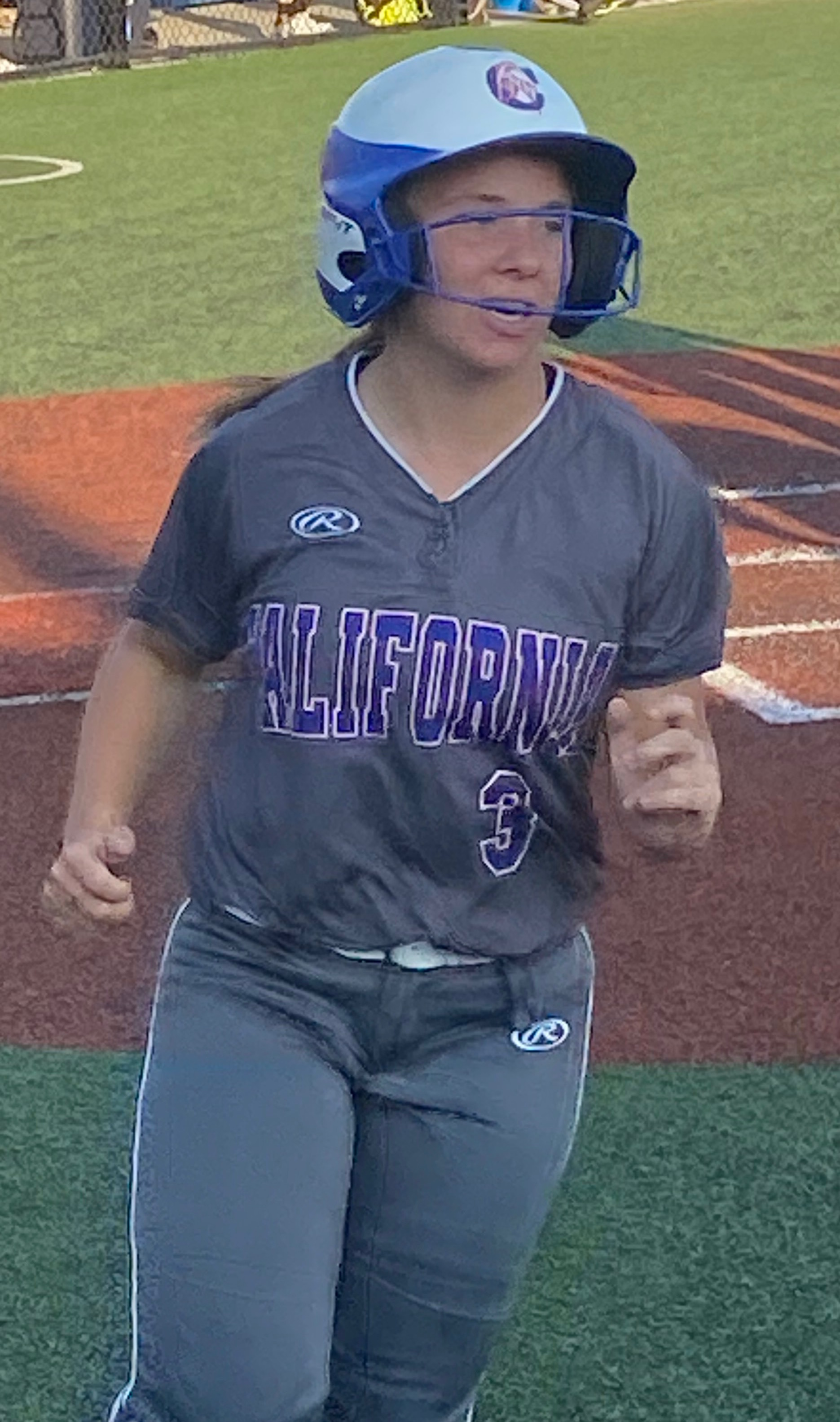 Senior Ella Percival went 3-3 with a single, a double, and a triple against the Lady Tigers last Tuesday night. (Democrat Photo/Evan Holmes)