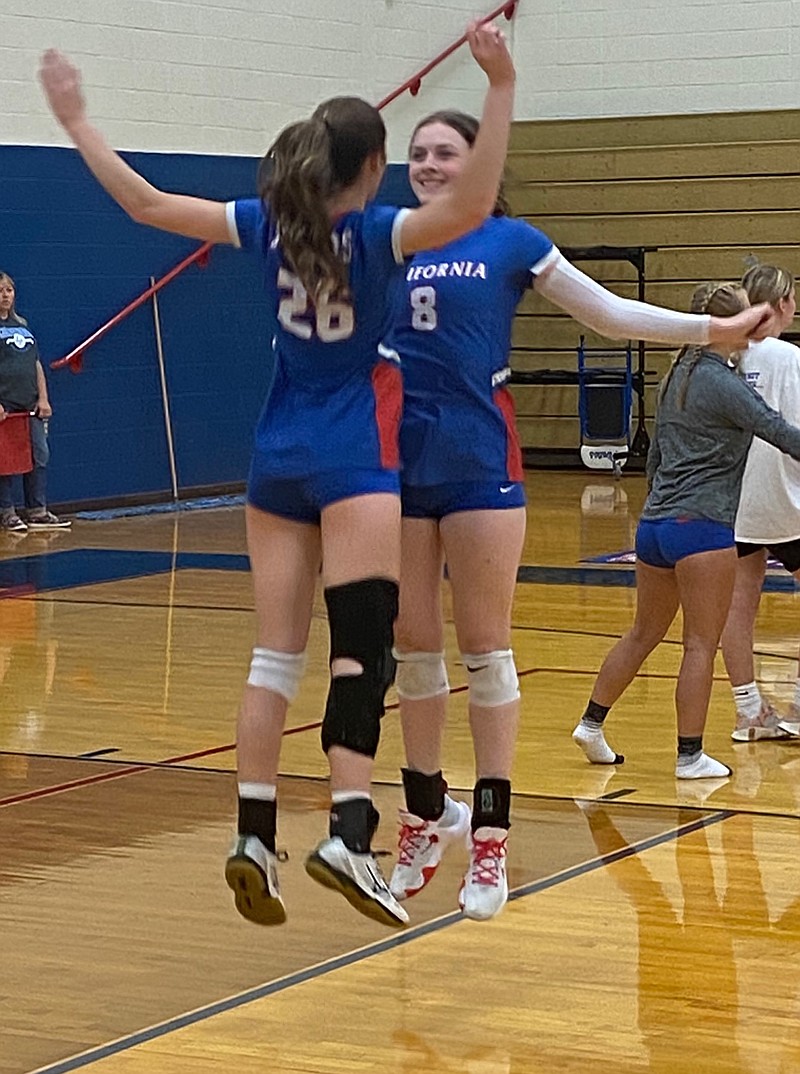 On Thursday night, California Lady Pintos volleyball played their biggest game of the season so far against their arch rival, the Blair Oaks Lady Falcons, who had not lost a match since Aug. 26. California came out and surprised Blair Oaks with their tenacious defense and their hitting around the blockers. The series went back and forth for four sets, but Blair Oaks was not ready to relinquish their winning streak over California and won the match 3-1 (25-19, 21-25, 17-25, 20-25) over California.

Lady Pintos Head Coach Julie Bailey was all too familiar with the Blair Oaks Lady Falcons. Not only because they were California's arch rival, but also because several of California's players had played with Blair Oaks players before. In particular, Lady Falcons' superstars Bailey Braun and Autumn Bax. Bailey said Bax is one of the best blockers in the state and the strategy for her team was to spike the ball to the corners and send the ball to an area where Bax couldn't block the ball.

"Our game plan was to obviously try to keep the ball away from Autumn, because she's just hard to hit around," Bailey said. "So we came out attacking out of the middle. Lauren got some really good kills to start with in that first set. Autumn couldn't block at that point because of where she was playing. So we got some good points at the start because of where Autumn started, that gave Lauren and Emma the chance to just pound the ball. That gave us a little bit of momentum and I think Blair Oaks didn't know what to do. They were shocked that we came out playing like we did."

In the first set, the underdog Lady Pintos came flying out of the gate by controlling the ball and making Bax almost ineffective. With senior Lauren Friedrich and junior Macie Trimble leading the charge on the front line, California took a 15-11 lead in the first set and forced Blair Oaks Head Coach Megan Distler to take an early timeout. Blair Oaks tried to keep things close after the timeout, but the Lady Pintos had other ideas. Making a statement with a 25-19 win in set one, it was Blair Oaks' first set loss in a match in eight games.

Going into the second set, the Lady Falcons changed strategy by rotating Bax to the front line and blocking the ball to the side of the court. The adjustments began to show their effects throughout the second set. The two teams once again traded points for most of the set with eight ties and six lead changes. But it was Blair Oaks who went on a late run and scored five of the last six points in the set to win the set 25-21 and tied the match 1-1.

The script would repeat itself in the third set with the Lady Falcons coming out on top at the end of the set with a late run of points. Many teams at that point might have been deflated to the point where they thought they couldn't come back and win, but Bailey said her team was different.

"I don't think we were mentally drained. I think we were just battling. Unfortunately, they came out on top," Bailey said. "I've seen our girls shut down before and I feel like we didn't do that at all tonight. When they came off the court, they were like, 'Let's stay up. Let's get this done.' So I think two great teams played tonight. Unfortunately, we're both in the same district. So we'll see how that ends up. But it was a battle against two strong teams."

Now down 2-1 in the match, California was in a do-or-die situation. The Lady Pintos came storming out of the game in the fourth set by scoring 11 of the first 14 points. Blair Oaks was once again surprised by the quick start of California, but they had a little surprise of their own for California. Led by Bax and Braun, the Lady Falcons rallied back to stun California to tie the set 17-17. At one point scoring 10 straight points, the Lady Falcons didn't stop there and sealed the win by scoring the last four points and defeated California 25-20 in the set and took the match 3-1. Blair Oaks improved their record to 16-1-0, while California went to 10-1-1.

"We let them back in that fourth set. That really hurt us," Bailey said. "Autumn is just a great hitter. Bailey is a great hitter. It's hard to go up against someone who is 6'1 when we're not. But our front row did an amazing job with her and (Bax) really struggled to start the match. They had to make some adjustments to our great front row play and our great defense."

California's first loss of the season was a crushing one at the hands of their arch rival from Wardsville. But in the midst of the defeat, Coach Bailey did like the competitiveness her team showed throughout the match. She believes her team did stand a chance against Blair Oaks on Thursday night and the Lady Pintos still have the potential to beat the team later in the season.

"None of the games were blowouts. We battled point for point with them," Bailey said. "There were times when they were pushing our blocks to the outside and it was hard for us defensively to adjust back to where Autumn or Bailey was. They kept pushing the ball to the pins and that makes it really harder on our blockers and our defense. That made it hard for us to play defensively after that first set. I felt like in the second set, we weren't hitting the ball like we were in the first set. We really put the ball away in the first set and I felt like we stopped doing that. That made a little difference in the second set and the rest of the game too."

California and Blair Oaks are in the same district this season and are currently the favorites to meet in the district championship match next month. Bailey said that throughout the season, her players have been practicing for each game as if Blair Oaks was always their opponent. The Lady Pintos are now aware they can beat Blair Oaks after winning the first set Thursday. But they are also aware they are still a long ways away from where their game needs to be. Bailey said she knows her team is more than capable of beating Blair Oaks, but it will still take some more hard work to get there.

"I heard the girls say in the (locker room) that they have to start practicing like they are playing Blair Oaks. These girls practice and do everything hard. They are not lazy kids. But they realize the level that we need to take our practice too, compared to what it has been," Bailey said. "It's really hard to take it to that level when you don't have people to compete against at our practices. We don't have a 6'1 lefty who can swing the ball at us like Blair Oaks does. They understand that we have to take our practice and our game to the next level to be ready for teams like this and be ready for them at the end of the season. If we get to see them again."

California's next match will be Thursday night, when they go to Eugene to take on the Lady Eagles. 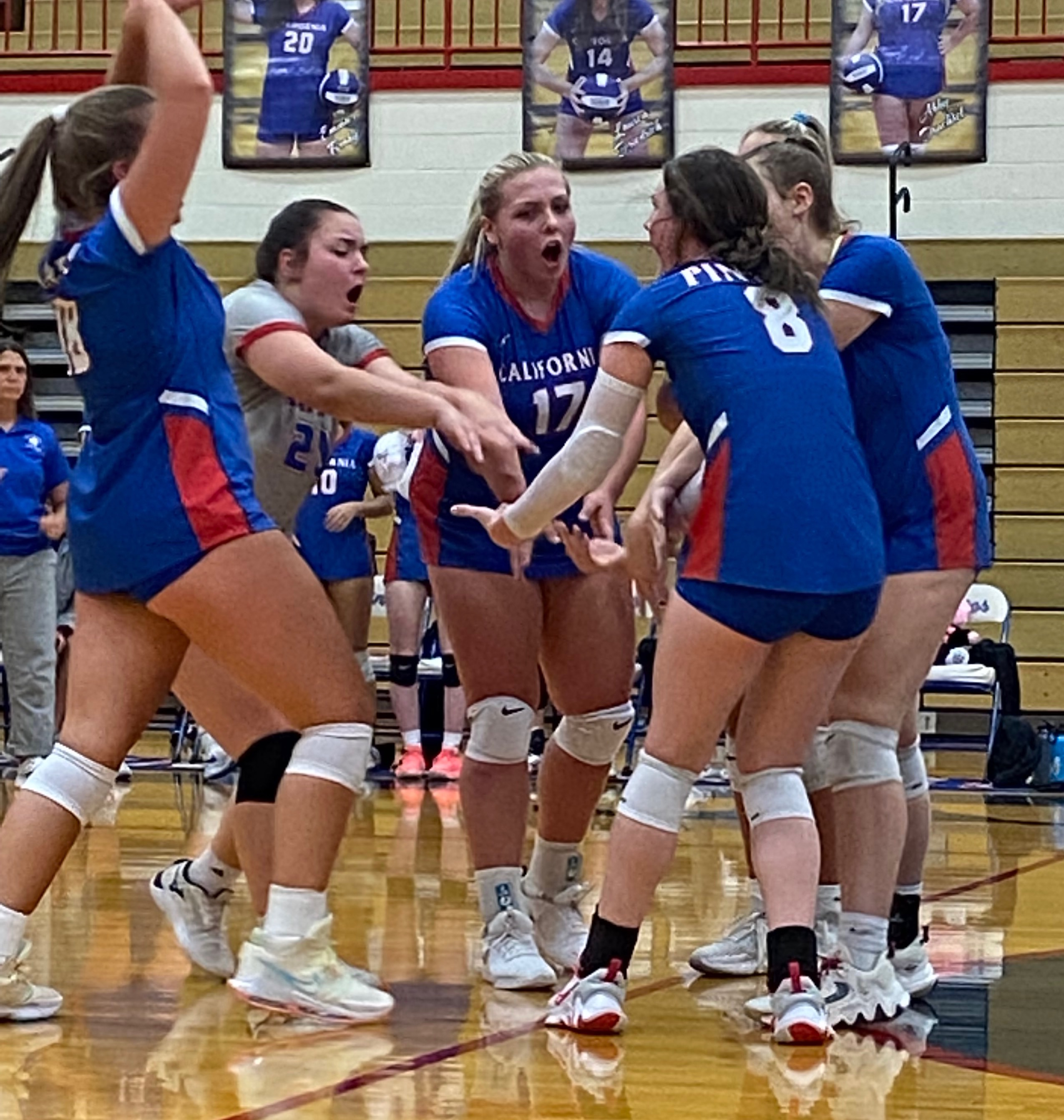 Junior Macie Trimble earns a kill for the Lady Pintos in the opening set against Blair Oaks. Trimble has five kills against the Lady Falcons. (Democrat Photo/Evan Holmes) 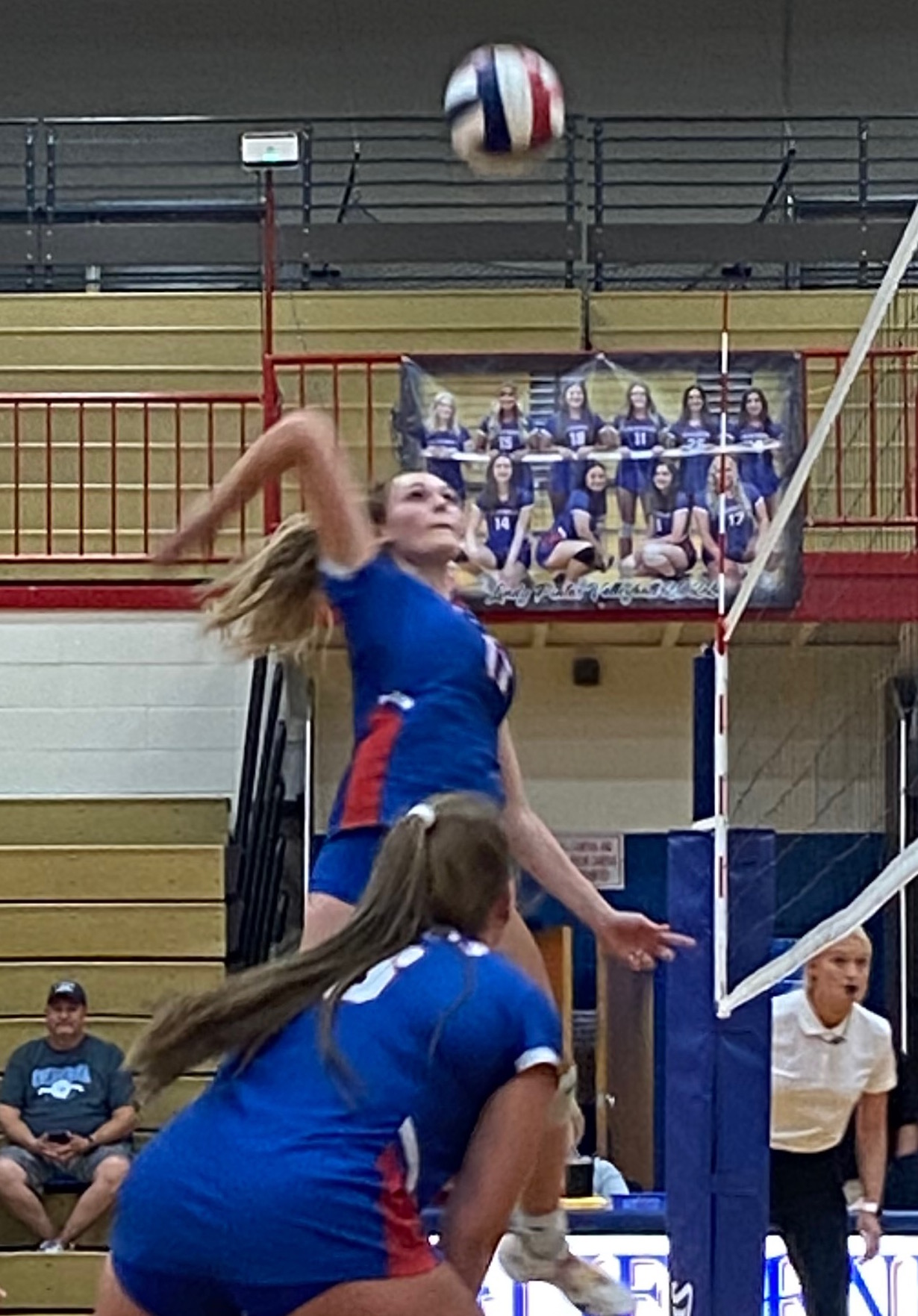 The Lady Pintos get an early ace against the Lady Falcons. California had eight aces against Blair Oaks on Thursday night. (Democrat Photo/Evan Holmes) 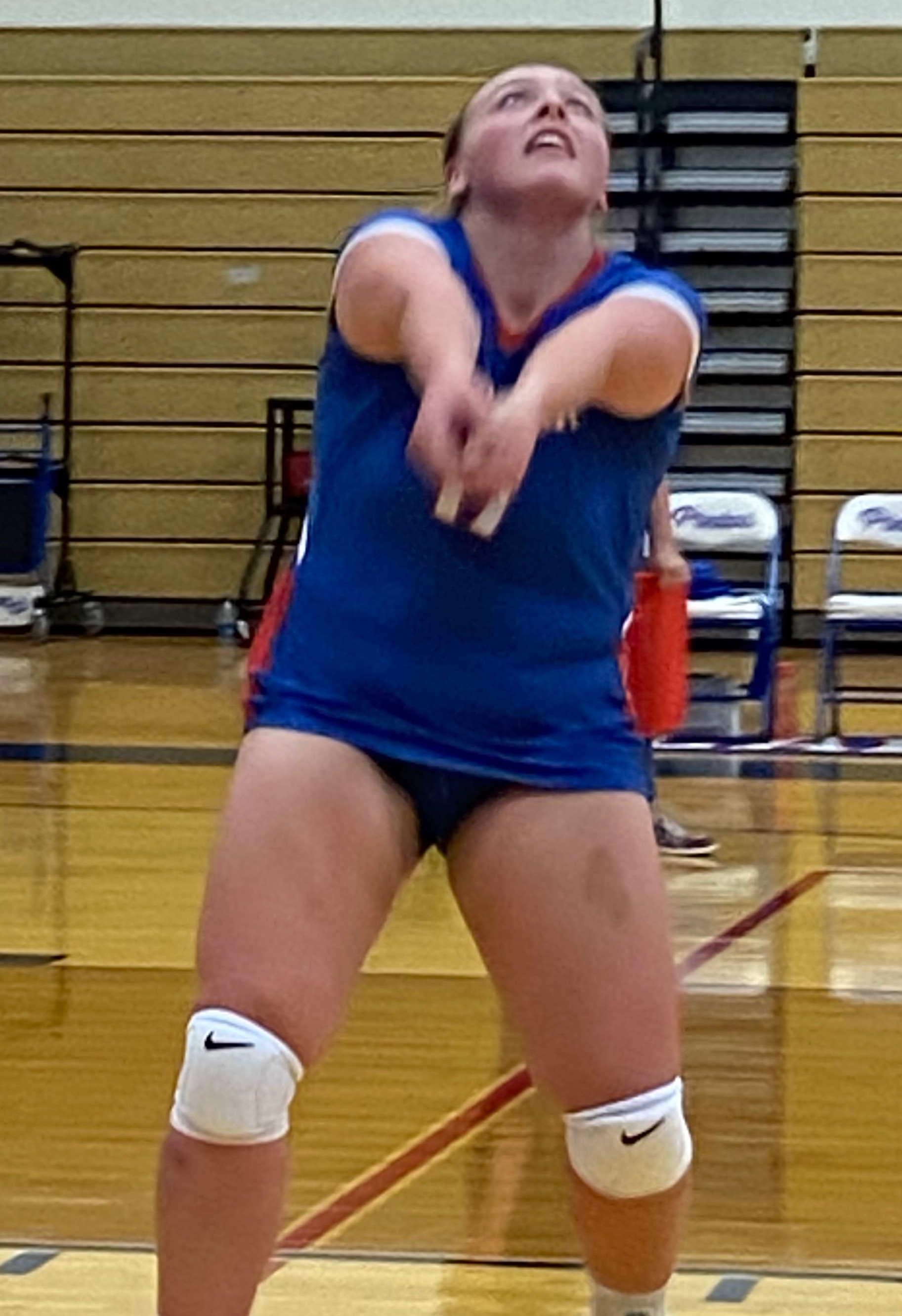 Senior Abby Trachsel gets a dig for the Lady Pintos in the second set against Blair Oaks. Trachsel had 10 digs and two kills against the Lady Falcons on Thursday night. (Democrat Photo/Evan Holmes) 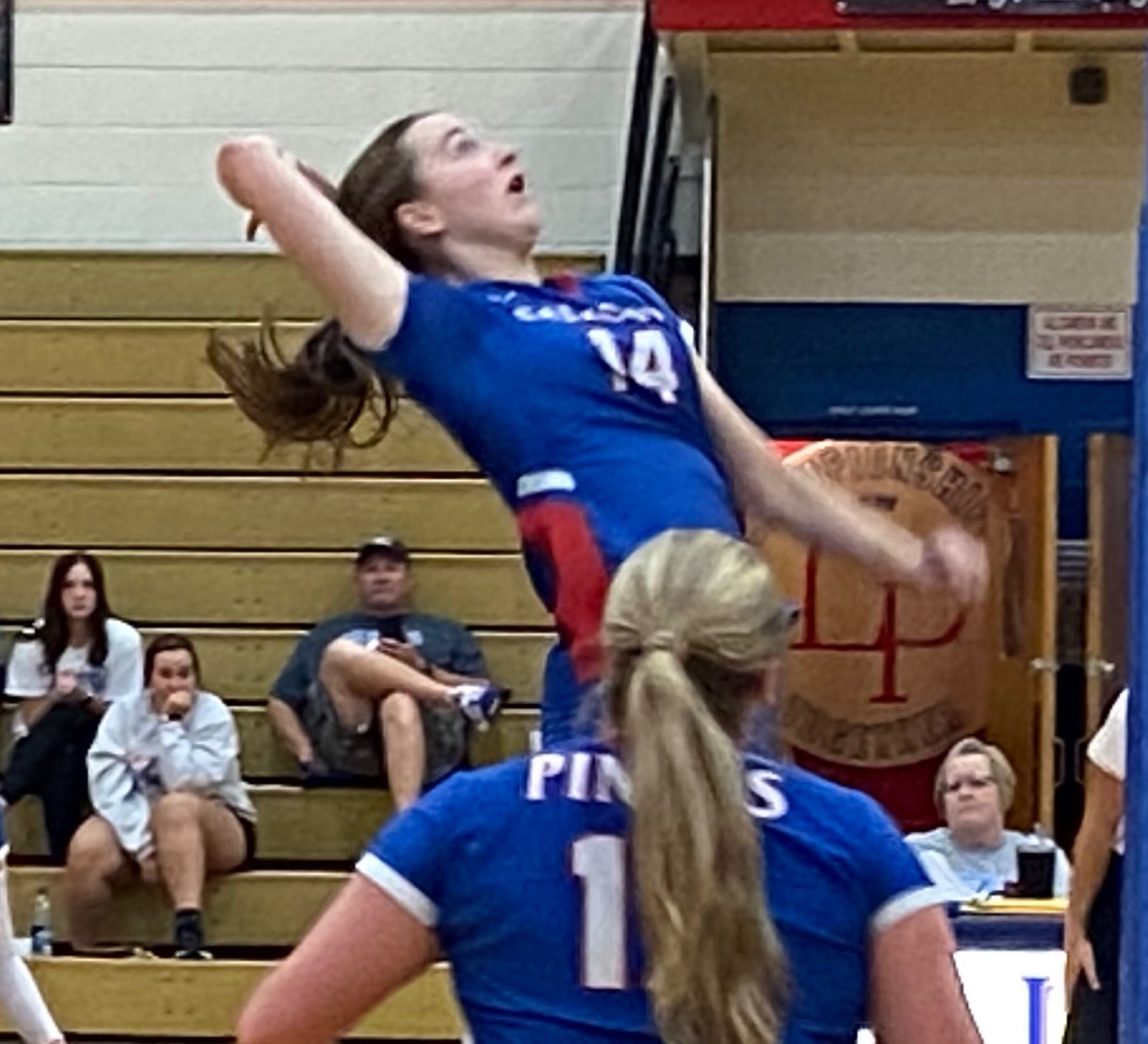 Senior Lauren Friedrich had seven kills for the Lady Pintos on Thursday night. She has a team-high 112 kills on the year for California. (Democrat Photo/Evan Holmes) 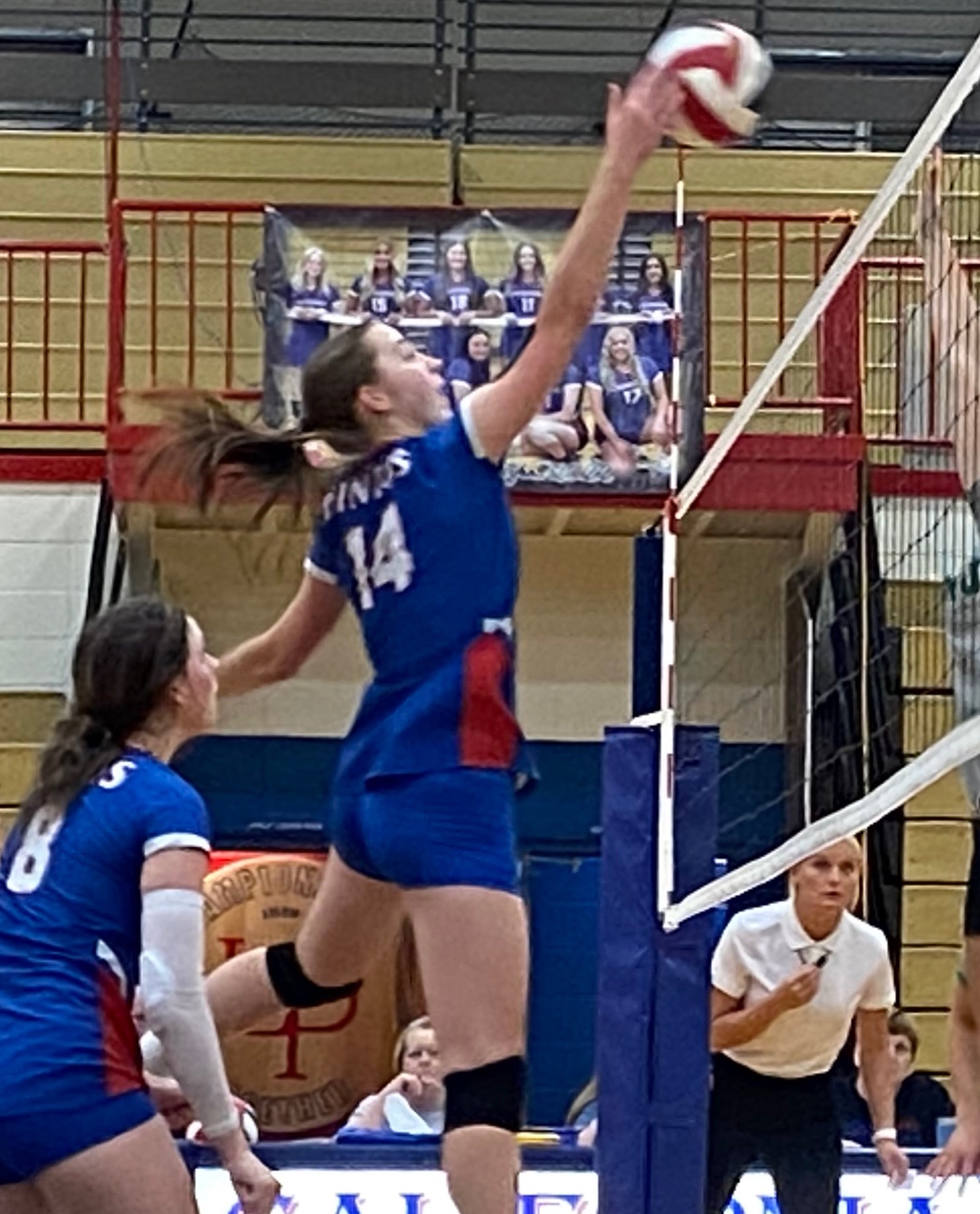 Senior Lauren Friedrich gets a tip-point to give California a 4-2 lead in the second set for California. Friedrich had seven kills against the Lady Falcons on Thursday night. (Democrat Photo/Evan Holmes) 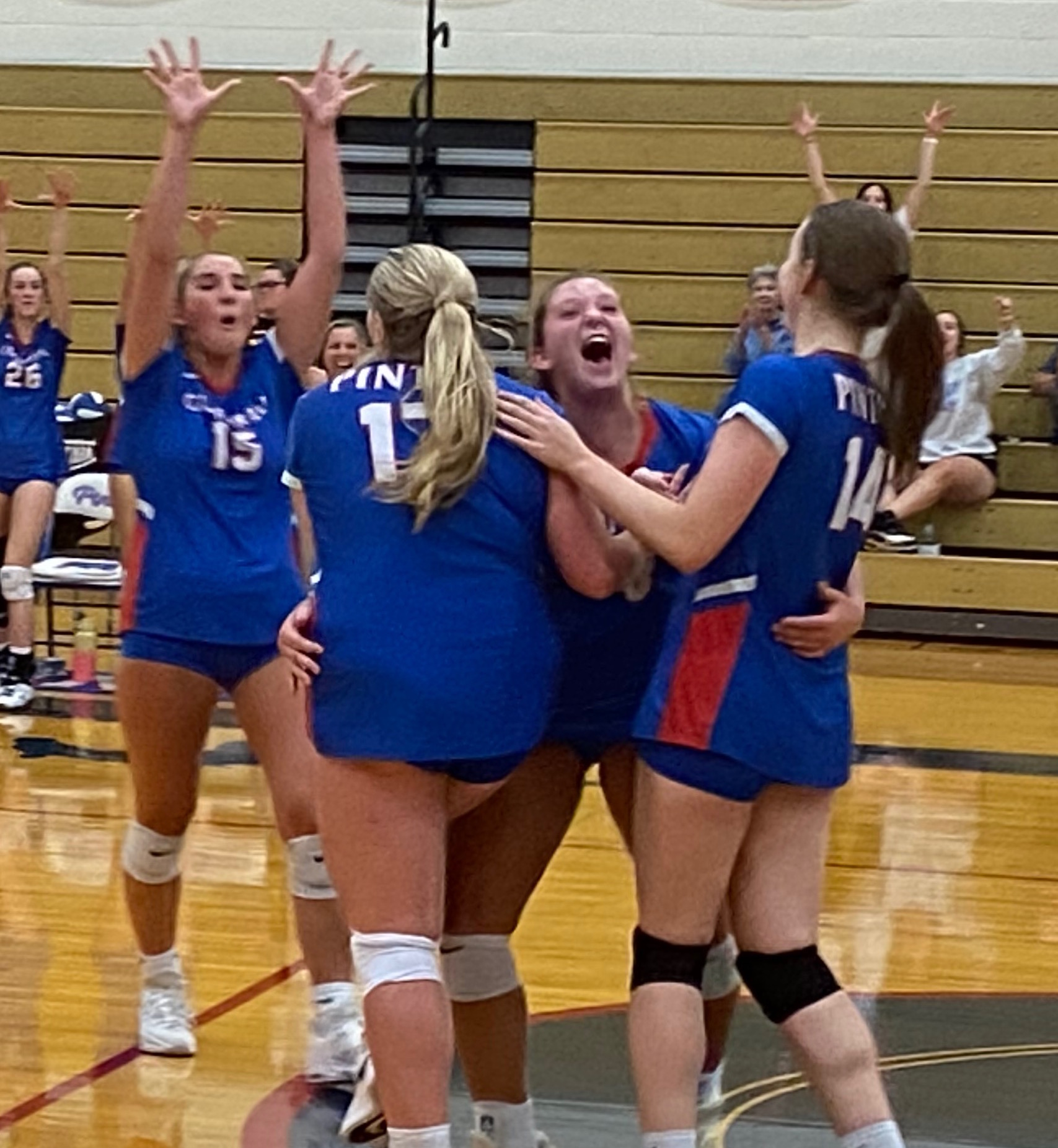 The Lady Pintos take an 11-3 lead in the fourth set against Blair Oaks on Thursday night. (Democrat Photo/Evan Holmes)