Pintos unable to keep up with Blair Oaks Falcons 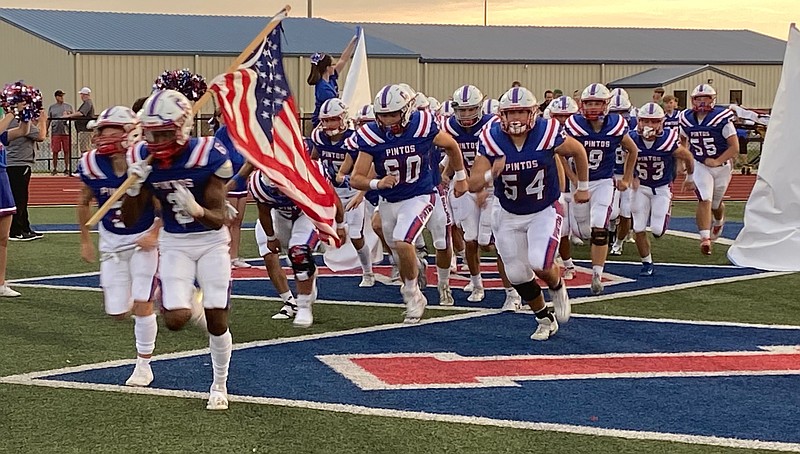 The California pintos charge onto the field to take on the Blair Oaks Falcons on Friday night. (Democrat Photo/Evan Holmes)

The California Pintos faced their toughest opponent Friday when they took on the former state champion Blair Oaks Falcons.

The Pintos put up a brave fight against the Falcons, however, Blair Oaks took control of the game with a 28-point second quarter and California was unable to catch up. The Pintos were defeated by the Falcons 52-14.

Going over Friday's game, the Pintos set their sights on Blair Oaks for weeks and their quarterback Dylan Hair, whom Pintos Head Coach Seth Womack said is perhaps the best offensive football player in the entire state of Missouri.

Hair not only had the throwing arm of a quarterback, but also the legs of a running back and had even ran for over 100 yards in each of Blair Oaks' first three games.

"You can't make mistakes with (Hair). When you do, he does what he did tonight," Womack said. "We were just on the wrong side of a couple of those things. We just missed a tackle a couple of times when we shouldn't have. But it is what it is and we are getting better."

When the game began, California made a statement by forcing the Falcons into a turnover on downs on their first drive. California converted two third downs in Blair Oaks territory on the following drive. The Pintos got all the way to the five-yard line before sophomore running back Brooks Volkart opened the scoring with a five-yard touchdown run for California.

The Pintos made another big hold on the fourth down and forced Blair Oaks into a second turnover on downs in the first quarter. But the Falcons came back with an interception, which led to their own five-yard touchdown run to tie the game 7-7, which is where the first quarter came to a close.

In the second quarter, Hair and the Falcons started to take over the game with their running and defense. The play of the first half for the Falcons occurred with just under eight minutes to play in the first half. Hair faked a hand-off to his running back and confused the Pintos defense. The ending result of the play was a 79-yard rushing touchdown that put the Falcons up 21-7. Hair picked up another run of 68 yards later in the quarter, which led to a one-yard touchdown run just before the end of the half. Although the California wide receiver cut into the lead with a 65-yard touchdown catch from quarterback Martin Kilmer, the Pintos went into the locker room down 35-14.

In the second half, the Falcons defense held its ground and dashed any hopes of a California comeback. Blair Oaks' front-line and linebackers refused to yield with a three possession lead and had California stuck in neutral for most of the third and fourth quarters. Blair Oaks put the finishing touches on the game with two passing touchdowns and a field goal. The Falcons took the win over the Pintos 52-14.

It was a difficult defensive night for California against the running. Blair Oaks ran for a total of 449 rushing yards on 61 total plays against California, while the Pintos had 286 total yards on 68 plays. Despite the big difference in yards, Womack said his team still did some good things against the powerhouse Falcons.

"We tried our best to keep Dylan Hair from running down the field on us. Other than a few big plays that he did have running the ball, we did that," Womack said. "Offensively, we moved the ball and we were able to throw on them a little bit. They have a dynamic outside set of linebackers. Their three linebackers are some of the best I've ever seen in my career. Their linebackers are terrific players, their secondary is pretty good, and their defensive line up front too. They're outstanding on all phases of the game and for us to be able to move the ball and hang in there with them for most of the game, minus those big plays, I think that's big for our kids and their confidence going forward."

Womack and the Pintos know their season has not been what they want it to be after four weeks. California feels that next week's home game against the Osage Indians needs to be the time where they get back in the winning column. It will be no easy task after Osage upset the undefeated Eldon Mustangs 28-0 for their first win of the season last week. Womack still believes his team is a good team despite the 1-3 start. The biggest problem has been the toughness of their schedule.

"We got a lot to build off of tonight. I know sometimes we look at the final score and say that we have some regrets. But our kids played hard, our kids fight, our kids are gritty," Womack said. "I still hold to what I said that we're a damn good football team. We've just played some really good teams these first four weeks and it doesn't get any easier. We've got Osage next week, followed by Boonville. We've got our work cut out for us. This conference is no joke, so it's going to be another dog fight next week."

The Pintos seek to bounce back against the Osage Indians on Friday night at California High School. 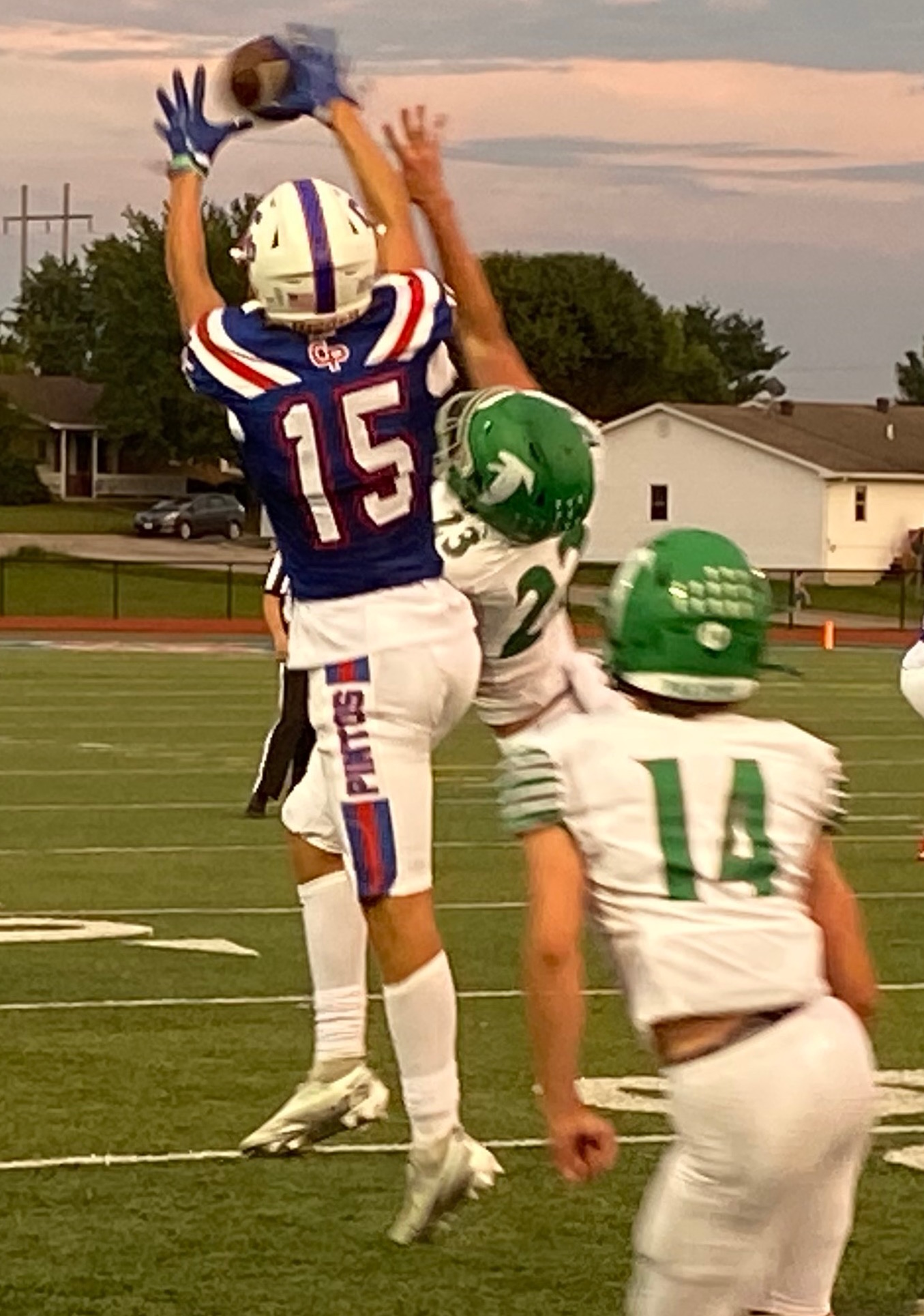 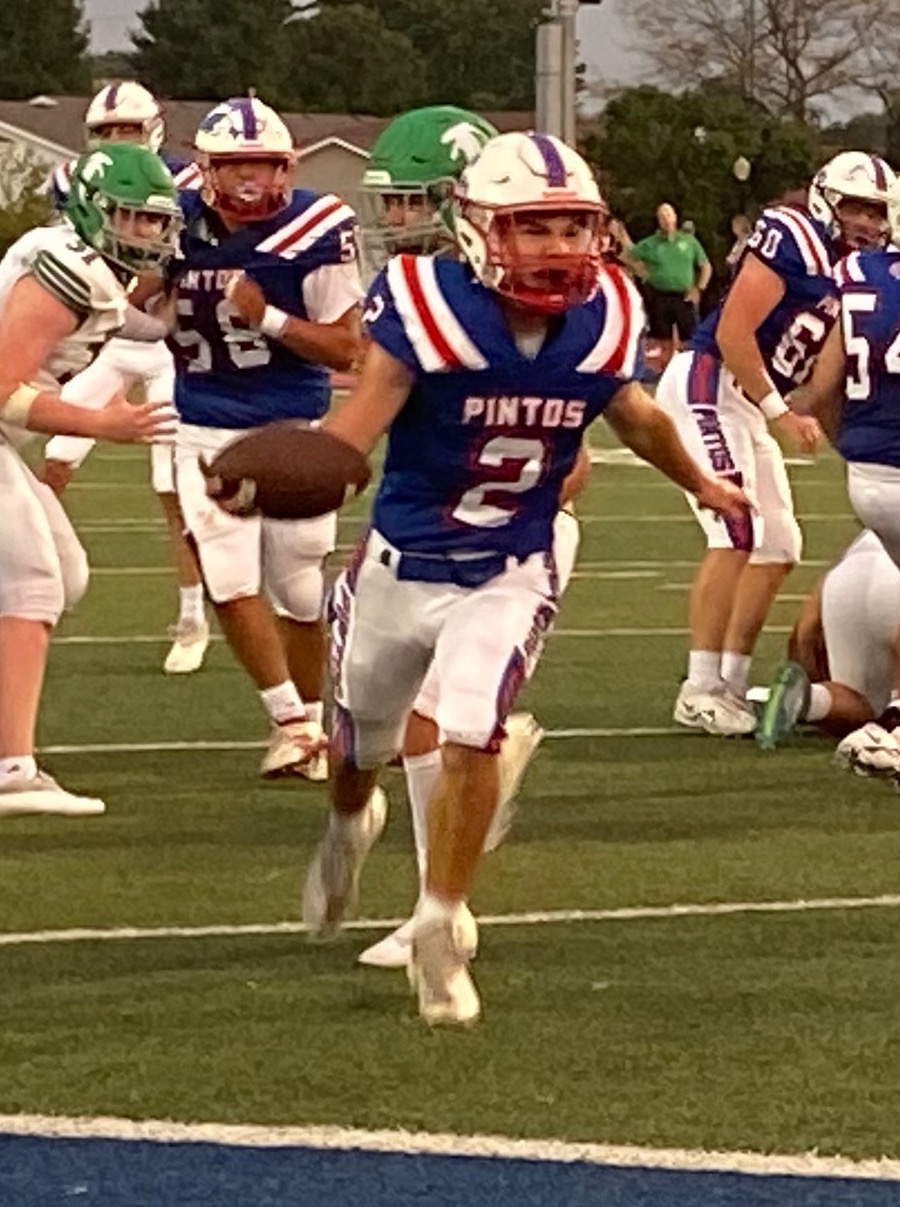 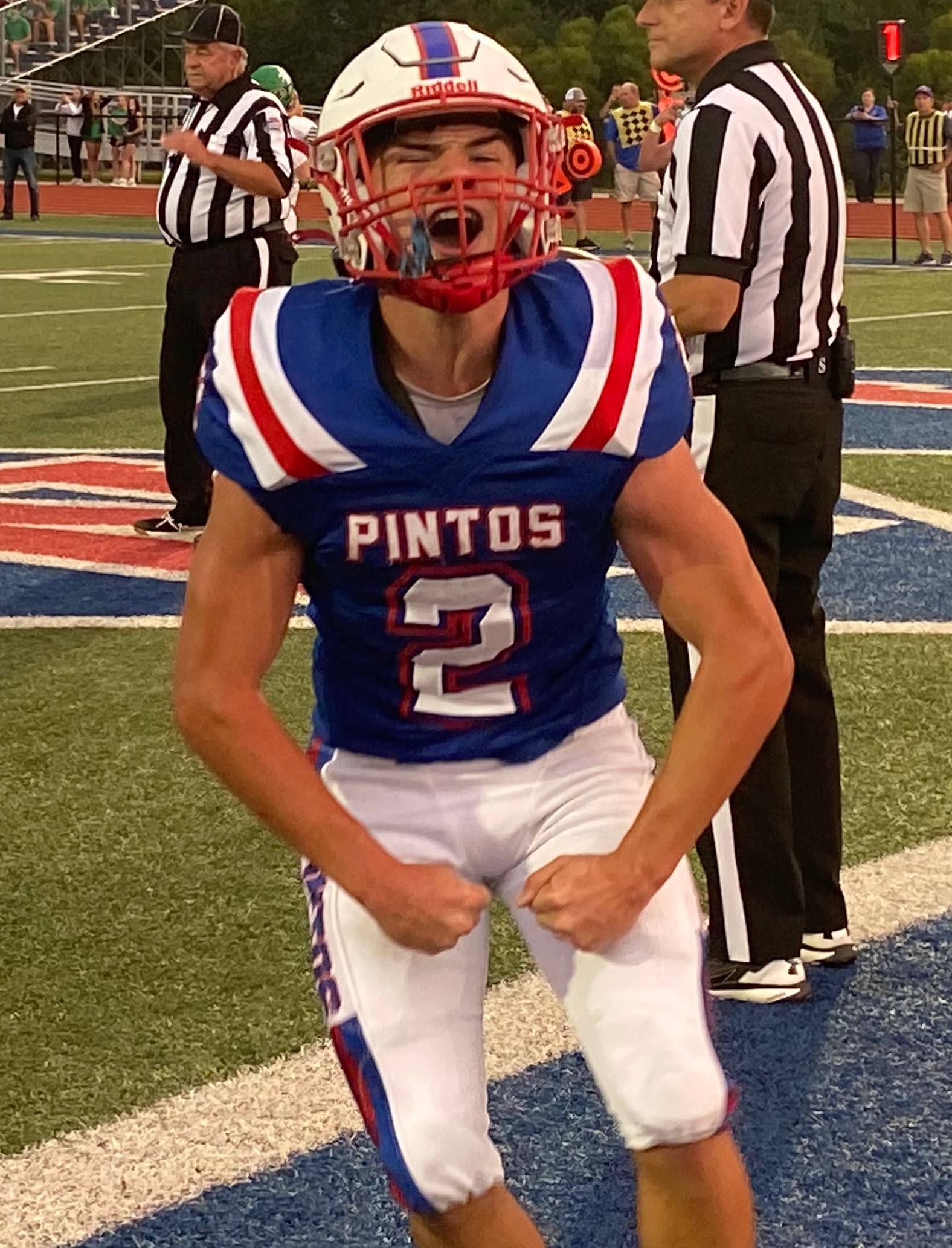 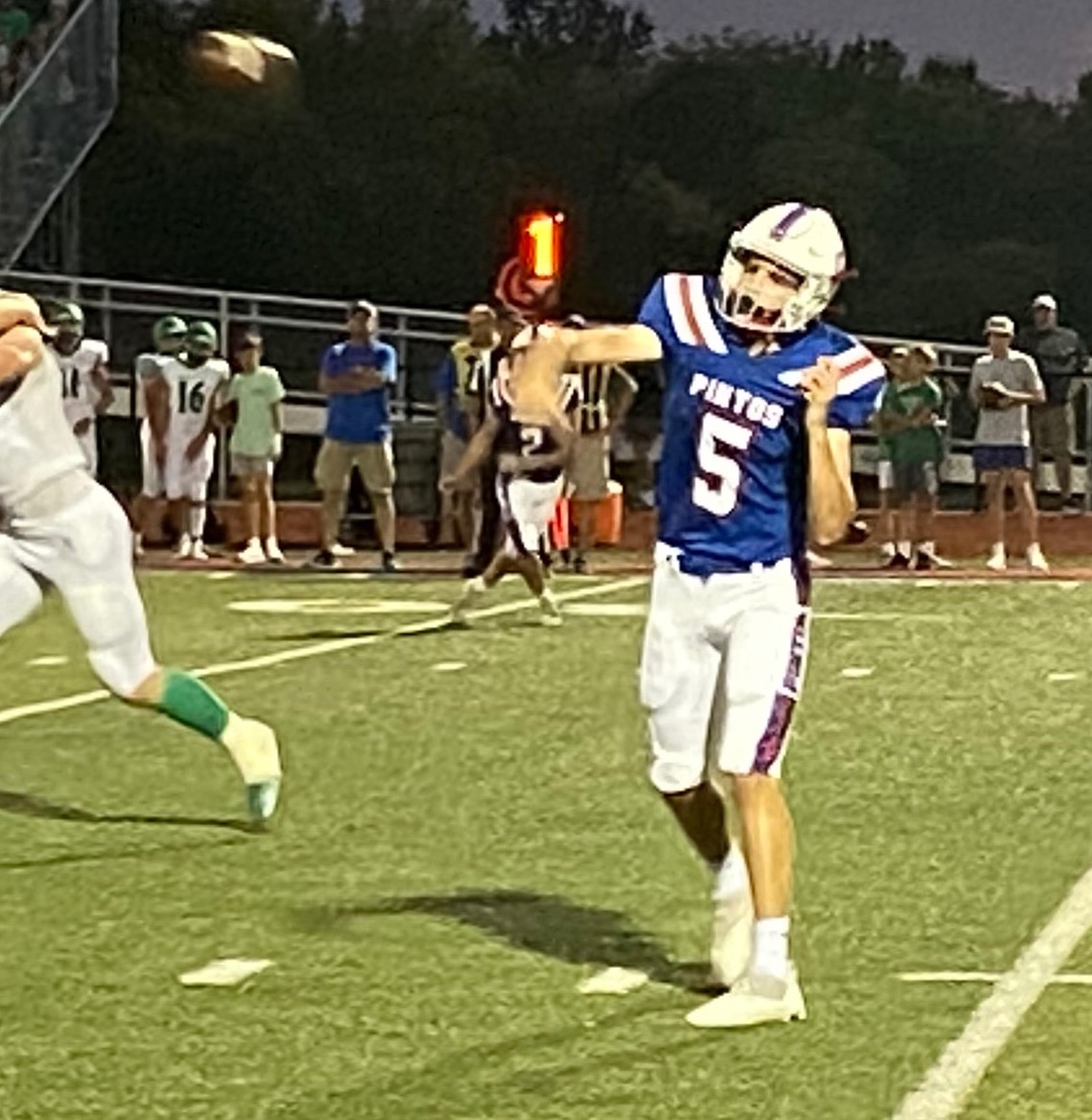 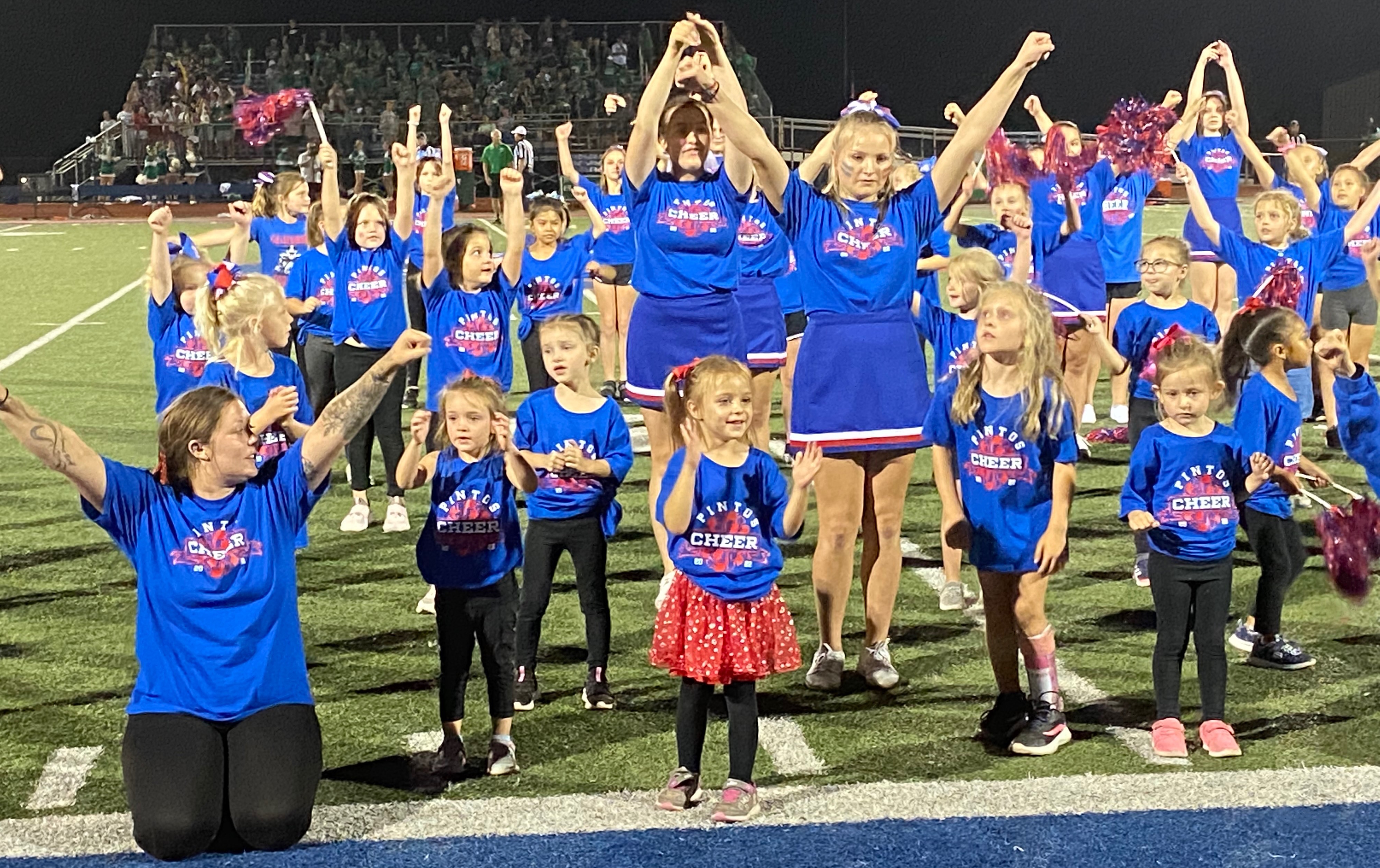