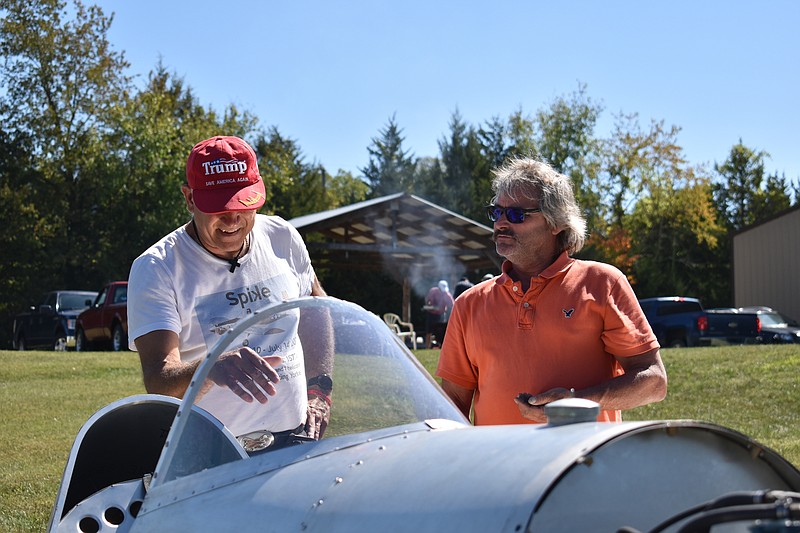 Democrat photo/Garrett Fuller — Robbie Rimel, right, of California, looks as Dennis Brooks, of Independence, points out something in the cockpit of Rimel's homemade single-seat airplane Saturday (Sept. 24, 2022,) at Phillips Field airport near California.

It's not everyday someone builds a plane in their garage, let alone a local business owner.

Over the last three years California Lanes bowling alley owner Rob Rimel put together his own Hummel Ultracruiser aircraft. After learning how to fly for his 50th birthday, he became motivated to fly his own aircraft. He couldn't justify spending money to buy an airplane, so he decided to build one instead.

Rimel decided to build a smaller plane in line with Federal Aviation Administration's part 103 ultralight category, which is for a single-manned recreational aircraft. Although Hummel Aircraft Company planes may be bought fully assembled, Rimel optioned to build it himself as a hobby, and ordered the parts.

"I spent about three years (building it). Saturday nights after everybody else went home about midnight, would start working on it," Rimel said. "Right here in the back of the bowling alley, there's some garages back here, and I built it in a little garage back there. Just one kind of one piece at a time and about 7000 rivets."

Rimel said he spent a little more than $20,000 putting the aircraft together. While he did buy the plane's Milholland Better Half VW engine (Volkswagen auto engines converted to aircraft engines) already assembled, Rimel spent countless hours making sure the Hummel Ultracruiser was in order. He said the aircraft does have a great range, coming out at 300 miles on five gallons of gas.

Once he was finished, he celebrated by placing his plane in the Ozark Ham & Turkey Festival Parade. Rimel's wife, parents, children and grandchildren all participated as they led a personalized float throughout California to signify his latest accomplishment.

"Most of the people didn't see me right away. But it was kind of cool just seeing the expressions on their faces and reading their lips, 'Oh, wow. There's a plane!'" Rimel said. "It was kind of neat and I hadn't done that before."

However, the real celebration came on Saturday when Rimel took his plane to Phillips Field Airport near California for the facility's annual fly-in event. Although he could not fly his vehicle just yet, Rimel was still able to have his aircraft stand side-by-side with other recreational aircraft in attendance.

What Rimel enjoys most about flying is the freedom that comes with it. He said pilots get to see the landscape in a different way. However, he said he still has some left to learn. Even with everything in check, he still needs experience here and there before he can take off from wherever he may be. Regardless, Rimel remains proud of his latest endeavor as well as the support he's gotten from his family.

I have run it and done all the engine stuff. Now it's just up to bolting the wings on and taking it for a flight. Myself, I'm probably gonna take some more lessons before I go take this one up," Rimel said. "Once I get it to where I can fly it, to where I know everything's okay...and I'm ready for it, then I'll just take it out of the garage and fly it when I want." 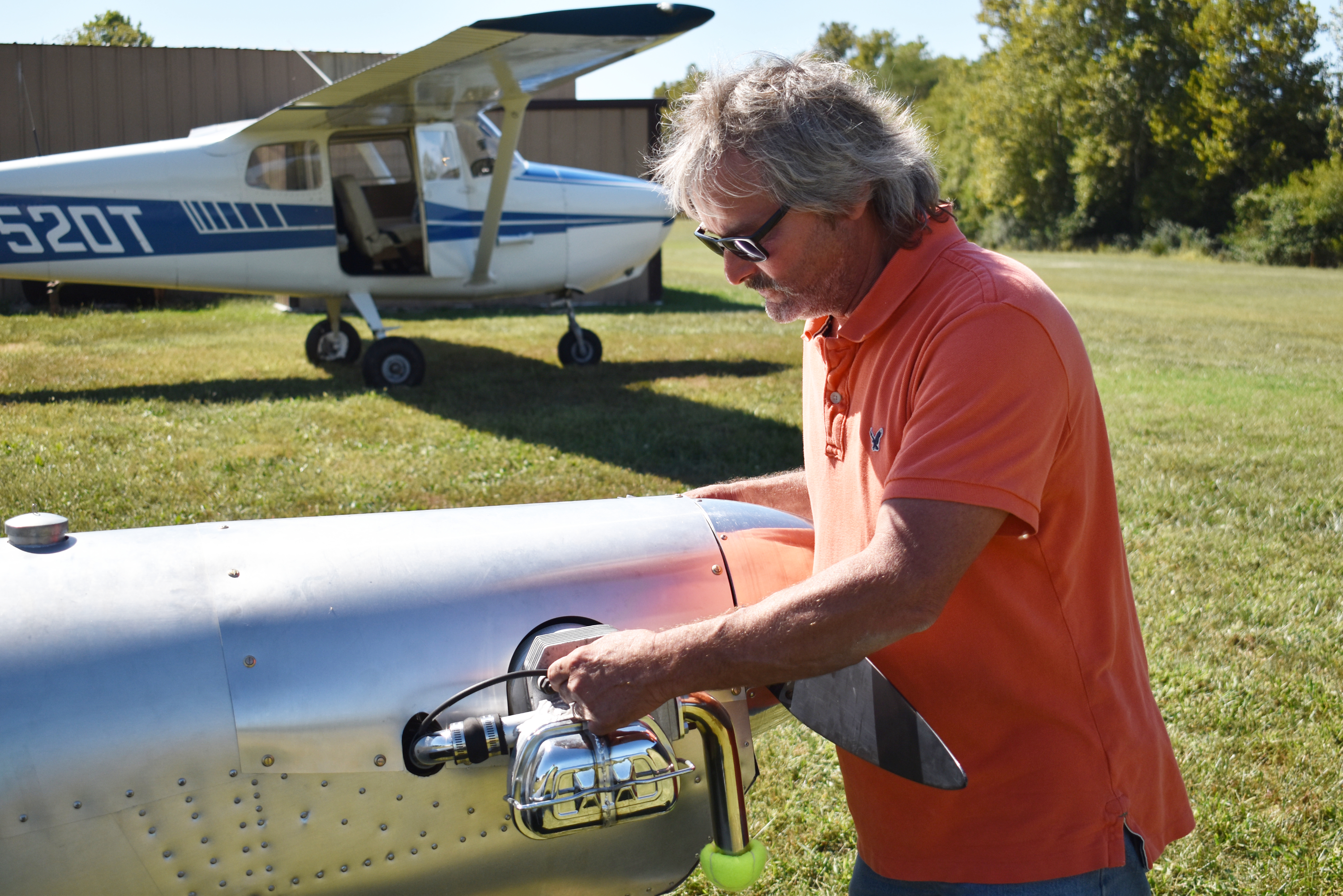 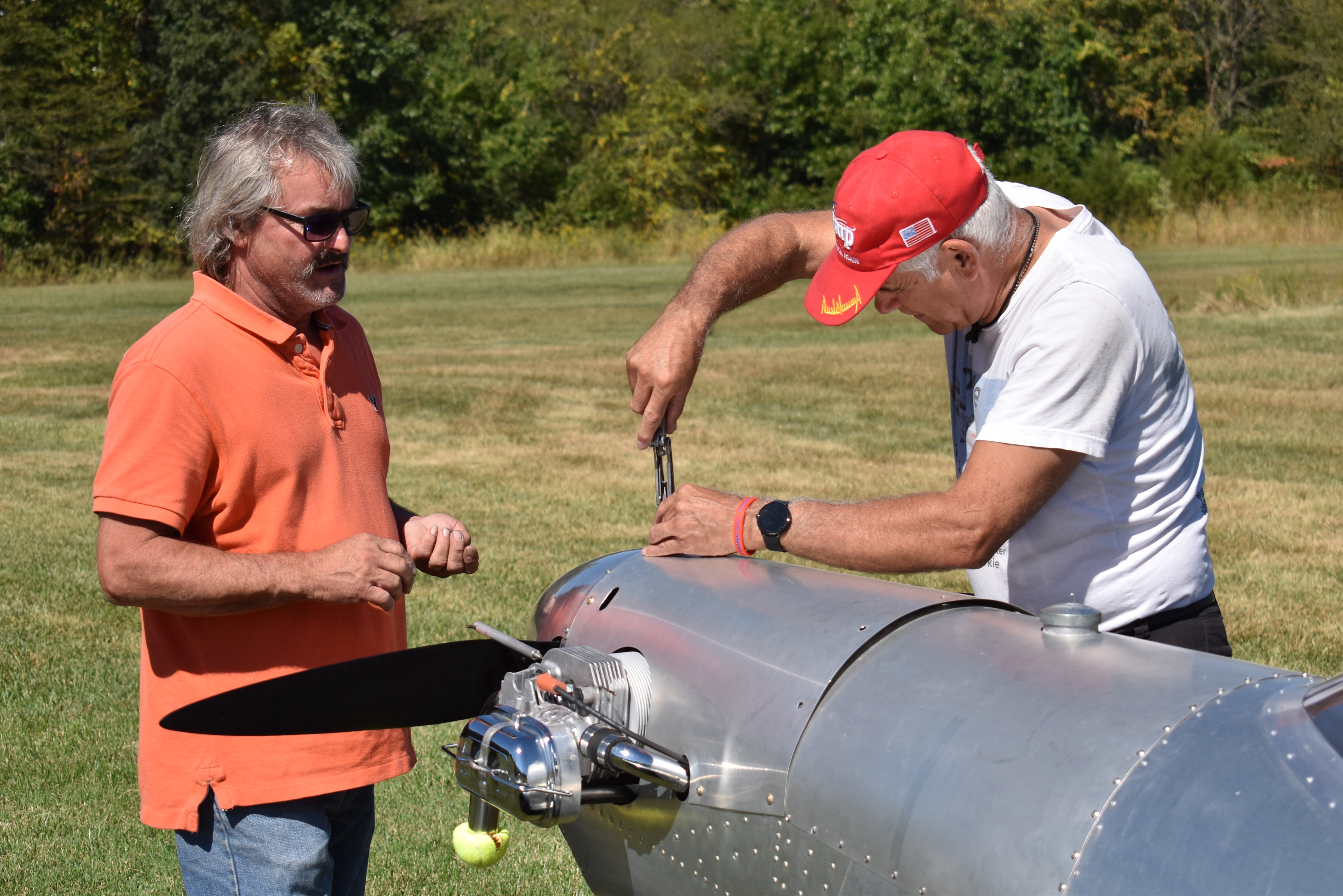 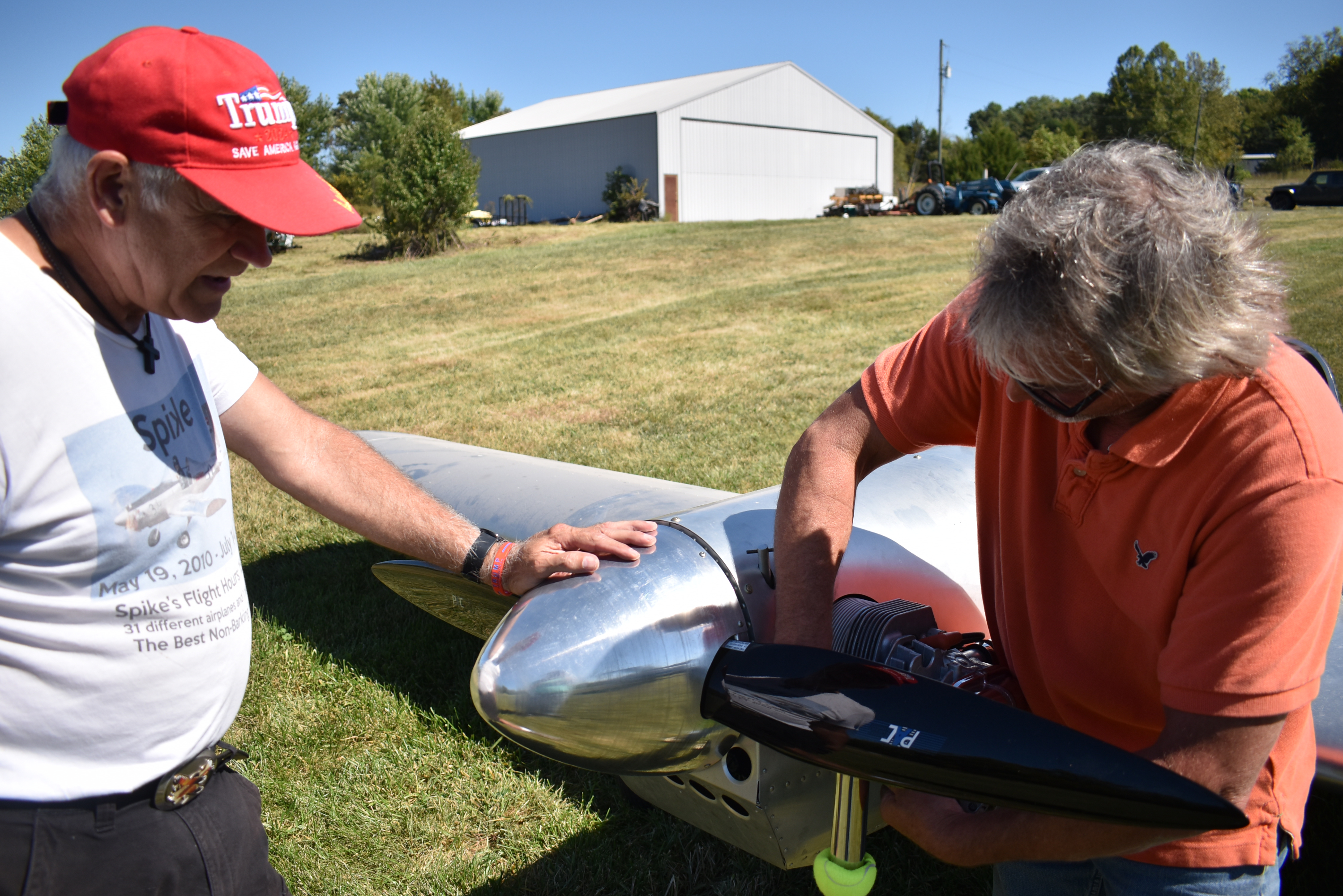 Democrat photo/Garrett Fuller — Robbie Rimel, right, of California, reinstalls fasteners Saturday (Sept. 24, 2022,) as Dennis Brooks, left, of Independence, watches at Phillips Field airport near California. Rimel built the single-seat airplane on his own with some assistance from Brooks.